Newborn baby boy is found abandoned in a bush in Hackney

BREAKING: Newborn baby boy is found abandoned in a bush in Hackney as police launch desperate search for his mother

A newborn baby boy was found abandoned in a bush with his umbilical chord reportedly still attached on a residential street in London.

He was found wearing a grey babygrow and hat on Sandringham Road, Hackney, London, at around 11.40am today.

Police were called by a passerby who discovered the little infant wrapped up in a white knitted blanket.

A newborn baby boy (pictured) was left abandoned in a bush with his umbilical chord reportedly still attached on Sandringham Road, Dalston, London, at around 11.40am today.

She wrote on Facebook: ‘My grandad has just found a baby abandoned in a bush on Sandringham road hackney e8. If you know anything please contact the police.

The baby is ok but might not have been if he wasn’t found!

‘Can’t Imagine what goes through a mother’s head or what her circumstances are to have to come to this decision. She needs to be found. Please share to London and surrounding areas x’

Following checks, police said the baby appears to have been born outside of a hospital environment.

He is now being cared for at an east London hospital, and the Metropolitan Police have appealed for his mother to come forward so that she can also receive medical care and support. 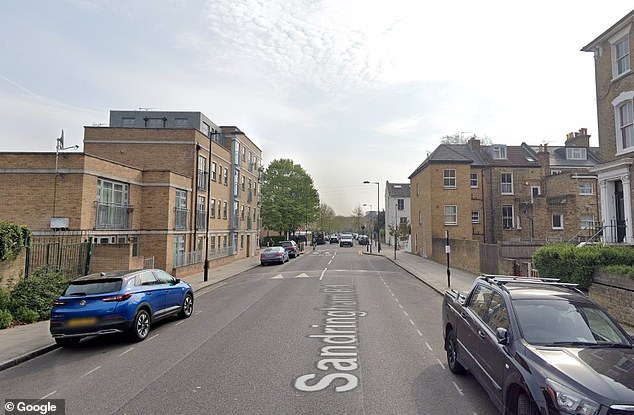 The baby was found wrapped up in a white knitted blanket on the residential street in east London (pictured). He is now being cared for at an east London hospital, and the Metropolitan Police have appealed for his mother to come forward

Police are appealing for information to help trace the mother.

Inspector Kevin Weeks of the Central East Command Unit said: ‘I would urge the mother of this baby to make contact either with police, your local hospital or GP surgery and let us know that you are safe and can receive any medical care you may need.

‘Our primary focus is to ensure the wellbeing of both you and your child.

‘I would also urge anyone who has information that could help us to reunite this baby with his mother to come forward.’

If you have any information that could help police, please call 101 and quote CAD 3039/25Jan.