Newborn whose skin erupted in ACNE now has a clear complexion thanks to a £7.99 coconut oil

A mother whose newborn’s acne was ‘worse than a teenager’s’ revealed how his skin miraculously cleared up within just a day of using coconut oil.

These were swiftly followed by white heads that covered his entire body, including several pus-filled spots on his face.

After trying multiple remedies, including washing his face in breast milk, a friend recommended Alex try a coconut oil from a baby skincare range.

Mrs Holdsworth, from Kettering, Northamptonshire, said: ‘I couldn’t believe it when I could see the redness disappearing before my eyes.’

She added: ‘Oil is something I cook a fry up with, so I thought it’d clog his skin even more, but I figured it was worth a try.

Henry Holdsworth, pictured at five weeks, started to develop acne (seen on his cheeks) less than a month after being born. These developed into whiteheads that spread all over his body 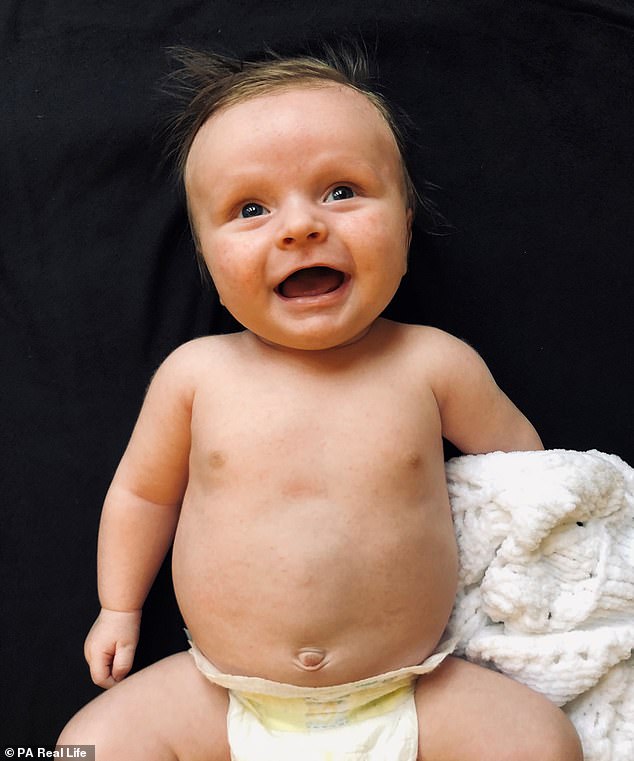 With his mother Alex at her wits’ end, she reluctantly tired a coconut oil product after being recommended it by a friend. Worried it would clog up his skin more, Alex initially just dabbed a bit on Henry’s face. Pictured now, she claims his complexion cleared up in front of her eyes 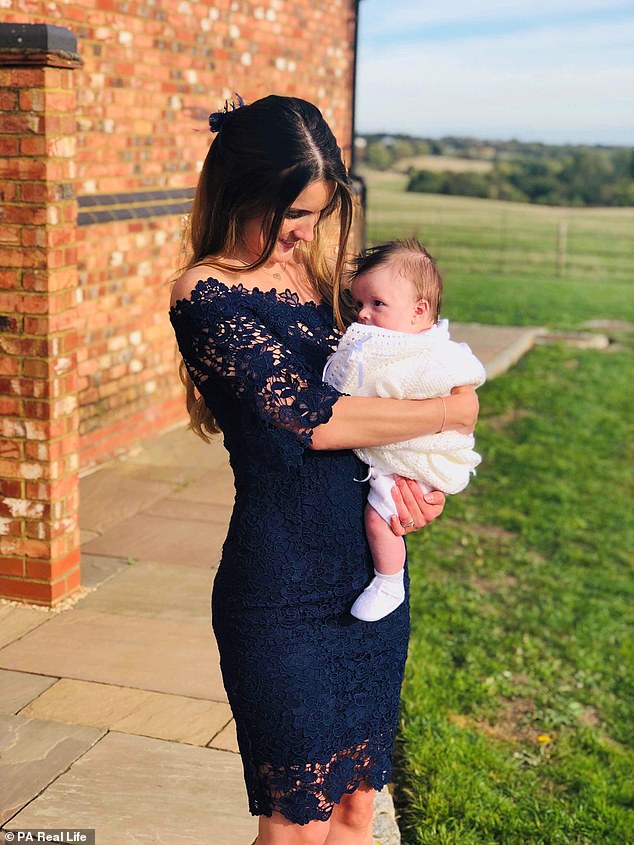 Alex, pictured holding Henry at his christening, claims his skin was worse than a teenager’s, with the newborn being so irritated by his complexion he would scratch it until it bled

Speaking of Henry’s spots, Mrs Holdsworth said: ‘His entire body was covered in acne. He had proper whiteheads, like a spotty teenager.

‘The acne was clearly irritating him, too, as he’d scratch so much he’d bleed.’

Desperate, Mrs Holdsworth tried bathing her son in breast milk after reading its soothing, antibacterial properties could clear up his skin.

‘It didn’t have much of an effect, though,’ said Mrs Holdsworth, who is married to Ben, 34, a managing director.

‘It dried his spots out, but the redness remained, and then the milk would go all crusty.’

Henry’s older brother Freddie, now four, also broke out in acne at around three weeks old, however, only his cheeks were affected.

Speaking of Freddie’s ordeal, Mrs Holdsworth added: ‘I was a first time mum with this perfect baby, who all of a sudden, was covered in acne.

‘In the world we live in today, you do feel paranoid about nasty comments, and I was worried what people would say.

‘When we went out, I’d see strangers staring at him, not knowing whether or not to say something.’

Freddie’s acne cleared up on its own when he was a few months old, Mrs Holdsworth, a former restaurant manager, added. 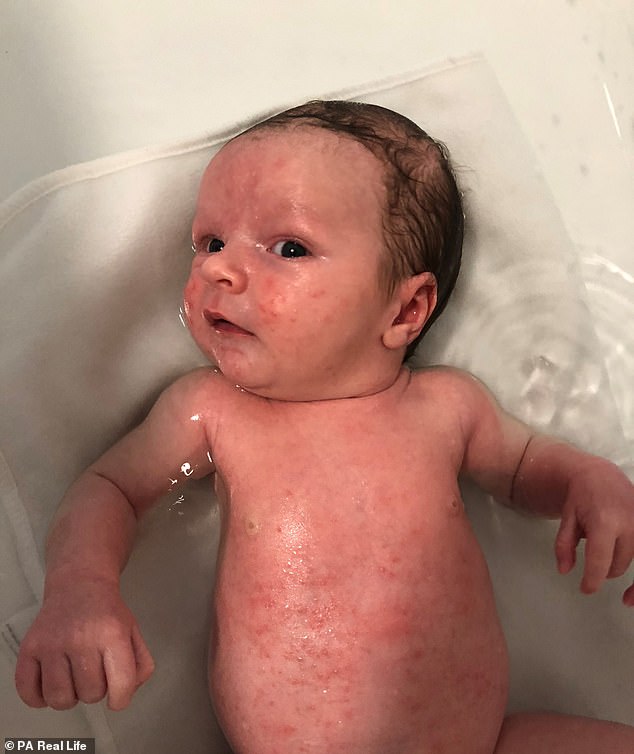 With spots covering Henry’s face and torso, Alex would even bathe him in breast milk after reading online that its soothing, anti-bacterial properties helps clear up troublesome skin 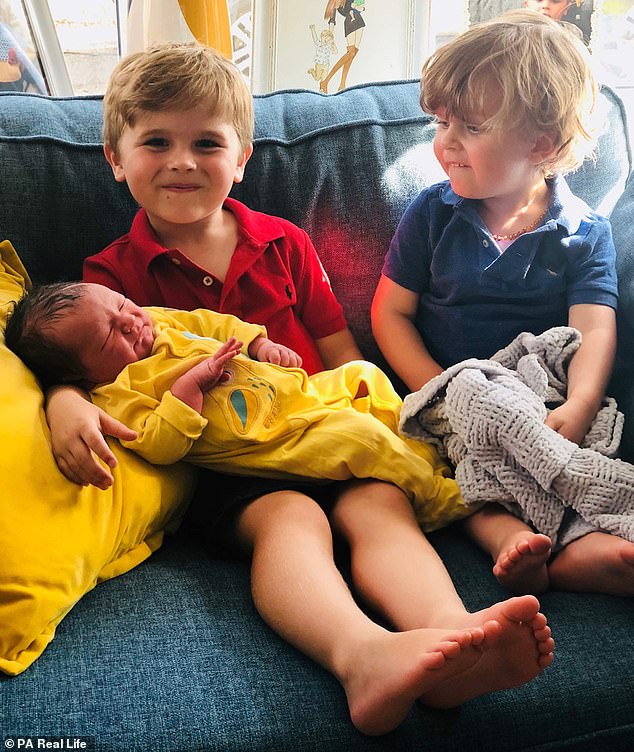 Henry’s older brother Freddie (pictured holding him) also suffered from acne as a newborn, which cleared up on its within a few months. When the middle son Charlie (right) did not suffer from the skin complaint, Alex was even more shocked when blemishes then affected Henry 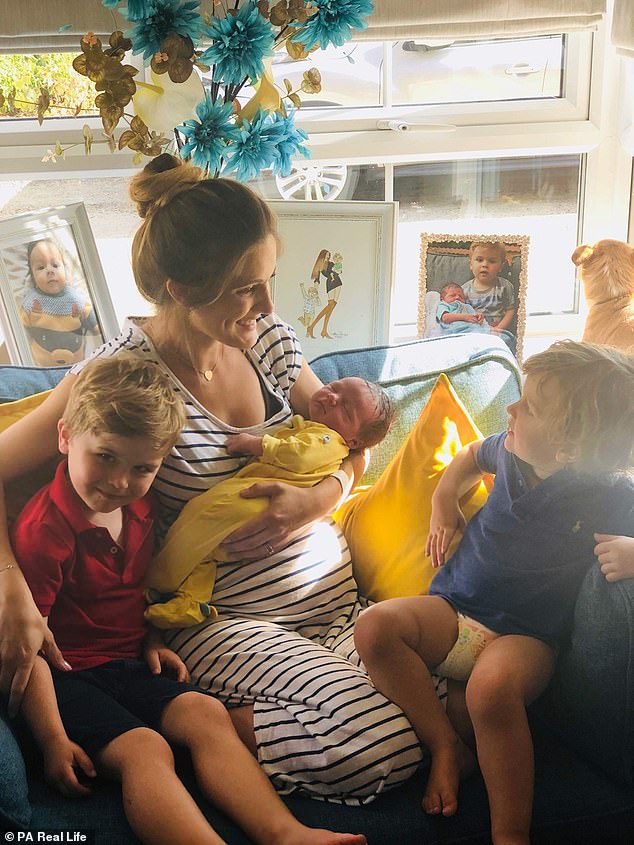 After being amazed by Henry’s skin transformation, Alex now uses coconut oil to improve her own complexion, as well as to help clear up Charlie’s (right) who suffers from mild eczema 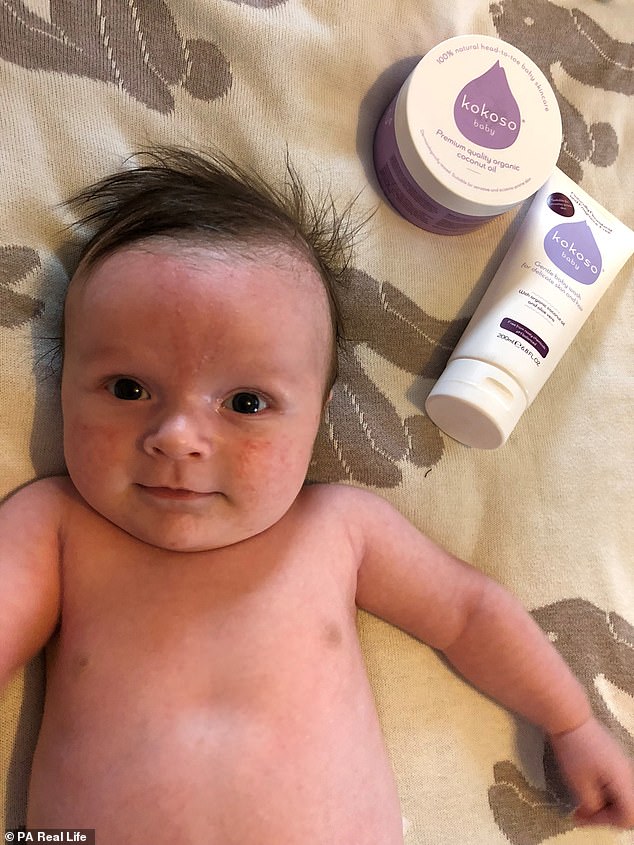 Since using the brand Kokoso’s oil and body wash (pictured), Henry is ‘much more comfortable and such a happy little baby’, Alex claims. Although he still suffers from the odd spot, his mother no longer worries about strangers judging her when they leave the house

After Freddie overcame the ordeal, the couple welcomed their second son Charlie, now two, who did not get acne.

Speaking of Henry’s skin problems, Mrs Holdsworth said: ‘I wasn’t expecting it this time, as Charlie hadn’t had it, so when I saw the acne start I thought, “oh god”.

WHAT IS BABY ACNE?

Baby acne is a common and usually temporary skin complaint that affects an infant’s face or body.

It affects around 20 per cent of all newborns to some extent during the first few months of their lives.

Most cases resolve without treatment.

Baby acne is different to the more aggressive infantile acne, which can last up until a child is two years old.

It is unclear why baby acne occurs, however, it has been linked to both an infant’s and its mother’s hormones.

Like acne in teenagers, that which affects babies often causes red bumps, as well as possibly whiteheads.

It most commonly affects the face, followed by the upper back or neck.

Baby acne can be irritated by rough fabrics, as well as vomit or saliva that is not cleaned off the face.

If acne persists for months, a paediatrician may prescribe a cream or ointment to help clear it up.

Over-the-counter face washes and lotions are not recommended due to babies’ skin being sensitive.

Not scrubbing the skin with towels or squeezing pimples can also prevent further irritation.

‘Then he woke up one morning totally covered. It was all over his entire body, especially his torso.

‘I was worried it was something more, as it looked very rash-like, so I took him to the doctors but was reassured that it was just acne.’

Due to Henry’s condition being much more severe than Freddie’s, Mrs Holdsworth decided not to wait for it to simply clear up on its own.

But while trying numerous different treatments, Henry would scratch at his face until it was left marked and bleeding.

‘We had to put him in mittens in the end,’ Mrs Holdsworth said. ‘He got all these proper whiteheads too. You could see how deep they were.’

At the end of her tether, Mrs Holdsworth was chatting to a friend one day when she was recommended the brand Kokoso.

Initially sceptical, Mrs Holdsworth just dabbed a little bit of the oil on a small part of Henry’s skin and was amazed by the results.

‘It was literally before my eyes,’ she said.

Mrs Holdsworth then ordered a pot of coconut oil for herself, as well as baby hair and body wash from the same range.

Just a day after using these products, the spots on Henry’s body started to vanish, she claimed.

‘The ones on his face were a different type of spot, so they hadn’t gone altogether, but the redness had improved so much,’ Mrs Holdsworth said.

‘I couldn’t believe how quick the transformation was.’

Mrs Holdsworth continues to use the products to keep Henry’s spots at bay, as well as applying it on her own skin and Charlie’s, who suffers from a mild form of eczema.

Speaking of Henry’s condition, she said: ‘He gets the odd little spot, but now I just tell people it’s baby acne, and get it out there myself before they can say anything.

‘He’s so much more comfortable now and such a happy little baby.’

Kokoso founder Lauren Taylor, 39, discovered the benefits of coconut oil when her daughter had dry skin problems as a baby.

‘When I found this lovely coconut oil helped my own daughter, I just wanted to share it with all other parents, so their own children could benefit too,’ she said.