Cambridge United match-winner Joe Ironside used to idolise Alan Shearer and would travel up from his native Middlesbrough to St James’ Park to watch his hero. Either of those strikers – the lower-league journeyman or long-retired club legend – would be better than what Newcastle have in attack right now.

Take nothing away from Mark Bonner’s League One side. They were excellent and deserved what should rank as a genuine FA Cup upset, given the hosts named their strongest available XI – including £12million debutant Kieran Trippier – and were backed by a sell-out crowd including chairman Yasir Al-Rumayyan, governor of Saudi Arabia’s Public Investment Fund. A riyal for his thoughts this evening.

For Newcastle were woeful in the final third, where 24 shots passed without conversion. At least Ironside or Shearer – even at 51 – would surely have stuck one of them away. 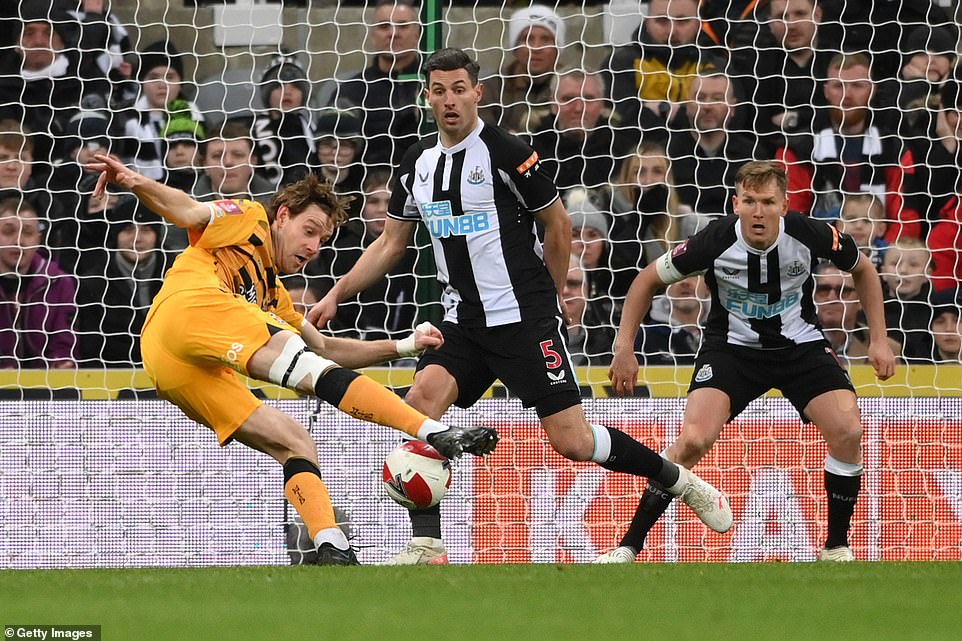 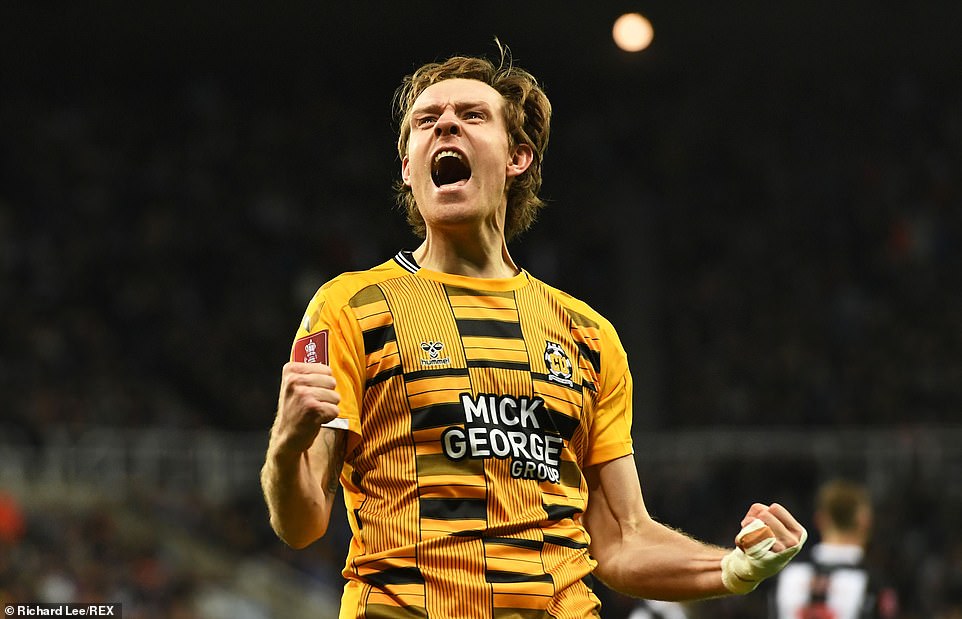 Ironside looks to the 5,000 travelling fans inside St James’ Park as he celebrates putting the League One side in front

Instead, Eddie Howe shuffled his pack – using two wingers and a wing-back in the lone-striker role – and watched as his team were made to look like jokers in front of goal.

With top scorer Callum Wilson sidelined for another eight weeks and deputy Dwight Gayle also absent, there is no doubt which position is their number-one transfer priority this month.

Newcastle used to duck out of the cup with little complaint under previous owner Mike Ashley. They were actually trying here, and that should be a concern for the new regime, who saw fit to issue a rallying cry in the home dressing-room afterwards.

But the story of their season will not be defined by this game, as sorry as it was. It is the matches ahead and the quest for top-flight survival that will determine the success or otherwise of a campaign that still only shows one victory from 20 matches.

For Cambridge, however, this was an historic occasion. Ironside will take the headlines for his close-range finish on 56 minutes, but goalkeeper Dimitar Mitov was undoubtedly their man-of-the-match. One save in stoppage-time defied physics but was evidence of the chemistry and spirit amidst their resistance.

U’s boss Bonner said: ‘It was a real day of memories for everyone in the club, certainly the players and definitely the supporters.

‘We knew how tough it was going to be, but I think we really stepped up in an atmosphere that was a challenge for us. It was all new, and we had to ride our luck at times and be very resolute defensively, but we were. We defended our box for our lives.

‘I’m really proud of the effort and endeavour of the team. It’s a major result for us and a brilliant experience to be able to share it with the supporters after the game.

‘The FA Cup’s certainly still important to teams at our level. I understand why some might question that, there’s more football now than ever before, but I guess the magic of the FA Cup is about the underdog pulling out a surprise story. We knew going into today that there’s always an upset somewhere. Whether we could be it, we didn’t know, but somehow we found a way of making it happen. 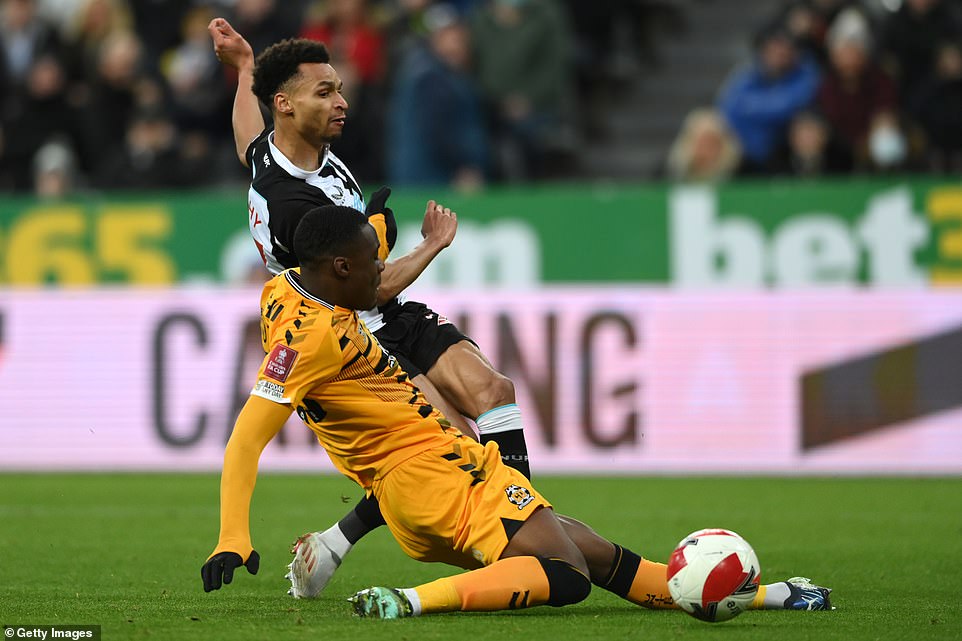 Jacon Murphy was guilty of missing Newcastle’s best chances in the first half, and also saw one ruled out by the linesman 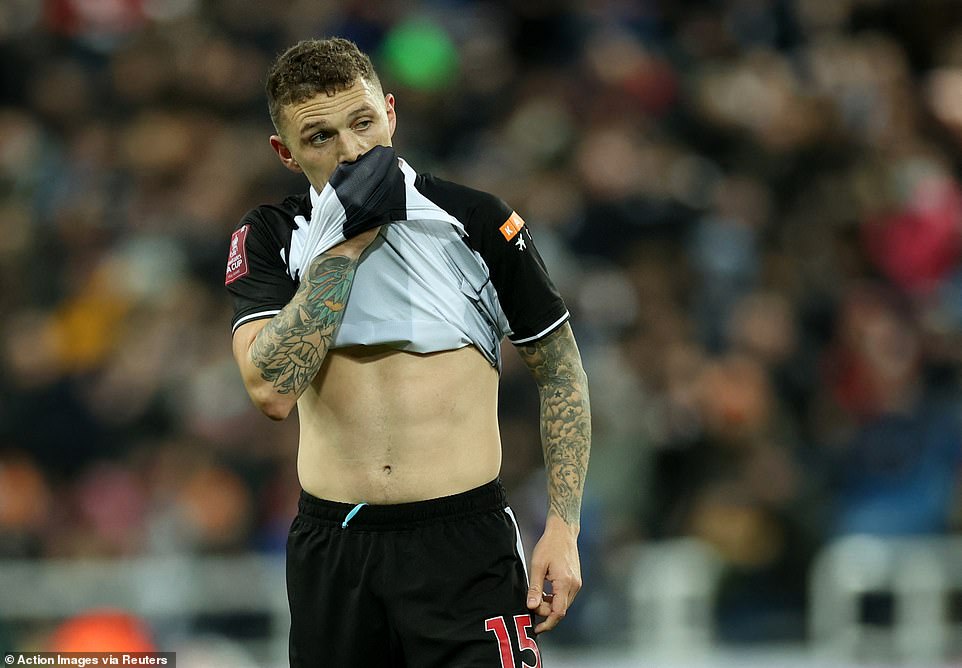 ‘The players are shot to bits. They’ve really gone to war for each other and left everything out there.’

The first half felt like shooting practice at times for Newcastle, and boy do they need it. Yes, Mitov played like the proverbial cat, but the Premier League side were as weak as kittens in the penalty area.

They had their club-record signing on the field, a player who arrived as a £40million striker. But here was a reminder as to why Joelinton has looked far more comfortable as a midfielder under Howe in recent weeks.

Twice he found himself free inside the area in the opening 20 minutes but elected to pass. And pass poorly, too.

Allan Saint-Maximin had started at centre-forward before wing-back Jacob Murphy had a go. He, in fairness, at least got into positions to score, even if he never really looked like doing so. 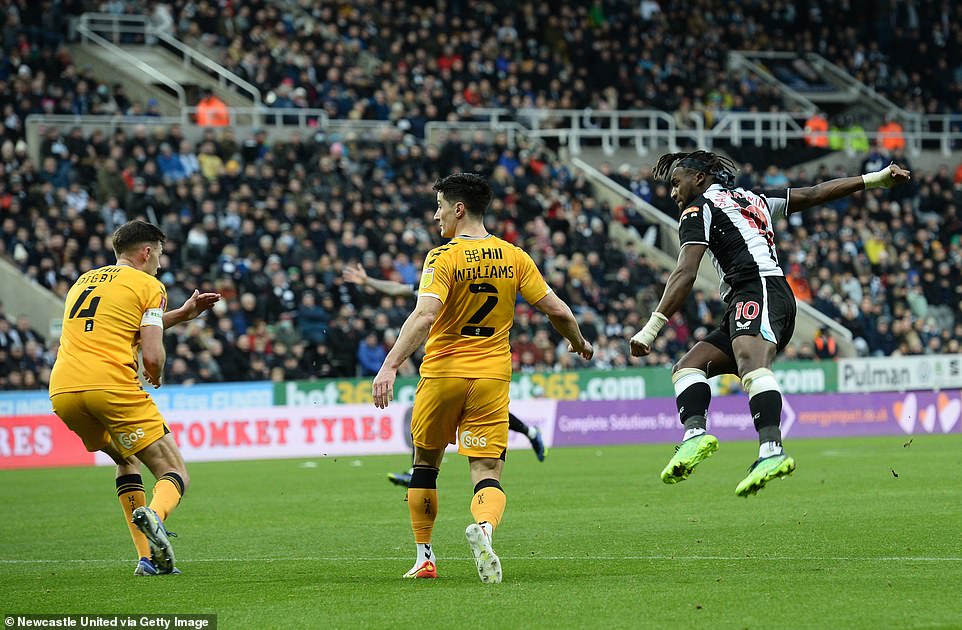 Allan Saint-Maximin attempts tries his luck from the edge of the area in the second-half, but cannot find the target 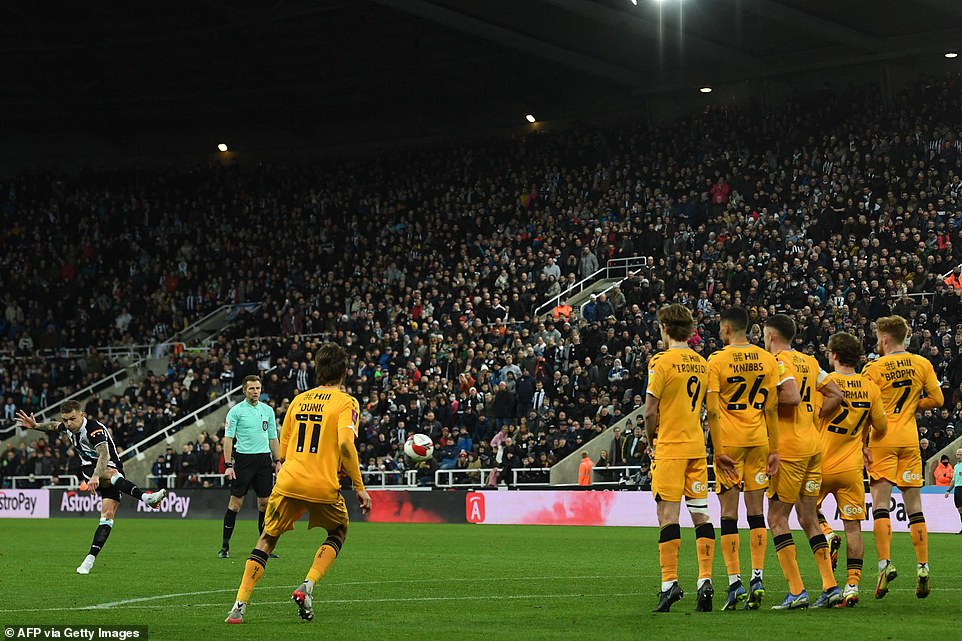 Mitov blocked Murphy’s curler on 24 minutes and the makeshift frontman was again denied by the Bulgarian before the break. It looked a certain goal when he swept on target from eight yards, but the effort gave Mitov half a chance and he took it, somehow clawing clear.

But the best save of the half came in injury-time when Murphy drilled for the top corner only for Mitov to brush against the crossbar. The keeper wore a smile as wide as the Tyne and so he should.

Eleven minutes into the second half and there were 5,000 beaming faces in the away end high above the Leazes End goal into which Ironside hooked home after a game of pinball inside the six-yard area.

Newcastle’s response was limp and only in the 94th minute did they look like forcing extra-time when Joelinton met a corner and headed on goal. Mitov, though, flipped over the crossbar.

Howe said: ‘We missed that focal point in attack. We tried to swap things around and it didn’t really work. But we know the challenge we have ahead. We can’t let this derail us.’

It is, you suspect, going to take a fair few of those Saudi riyals to get this team back on track. 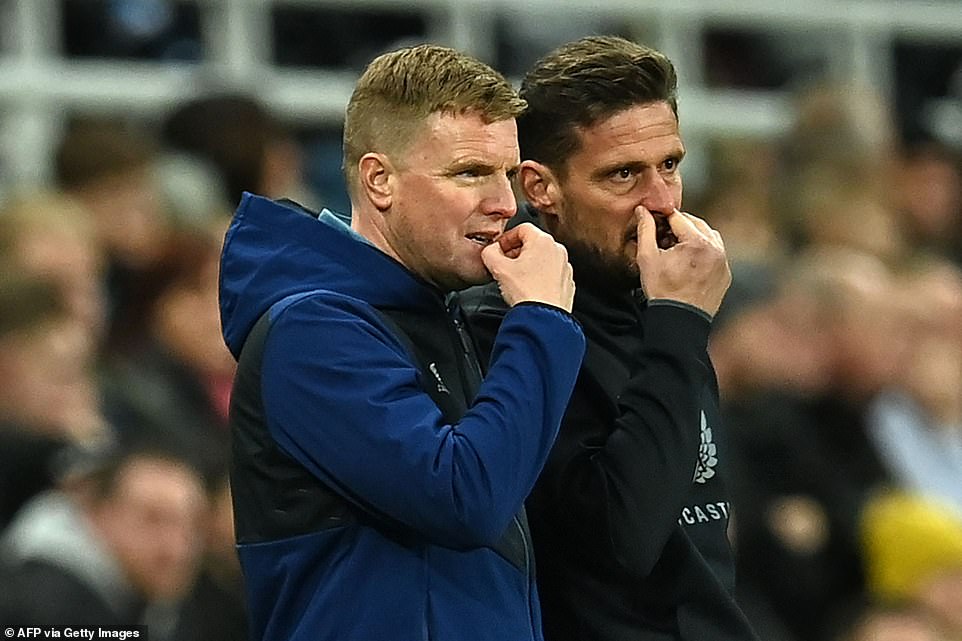 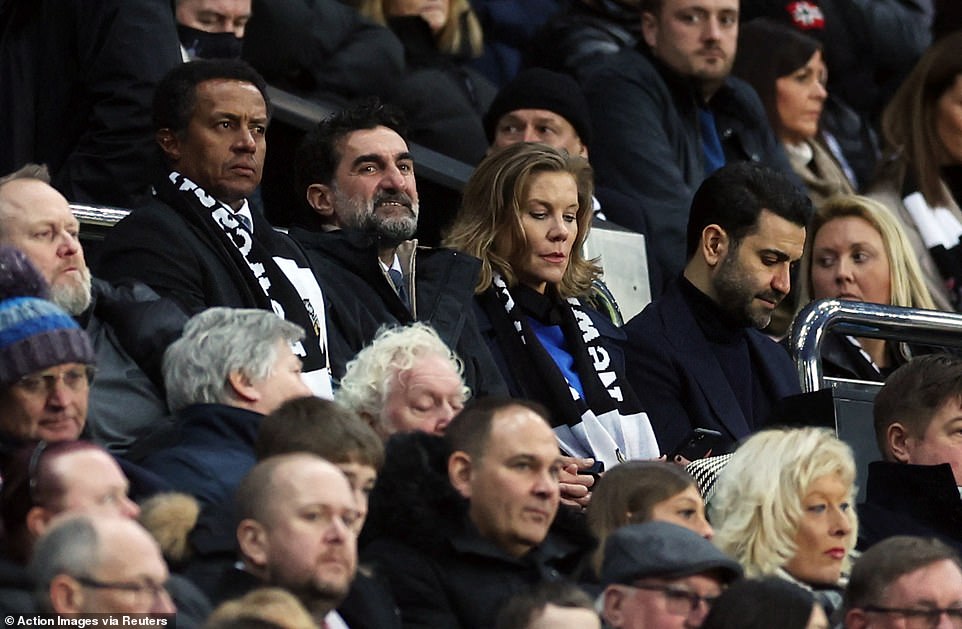