Not only are Manchester City a terrifically exciting football team, they also have the majority of the Premier League in a psychological stranglehold. Here was the hard evidence. This was a game that only really became a game in the final 10 minutes.

Newcastle and their manager Rafael Benitez clearly didn’t believe they could beat City, not even at home. Who really does believe they can beat them anymore?

Pep Guardiola’s team have now won their last 18 league games and that run has drained the belief, the optimism and the courage from just about everybody else. 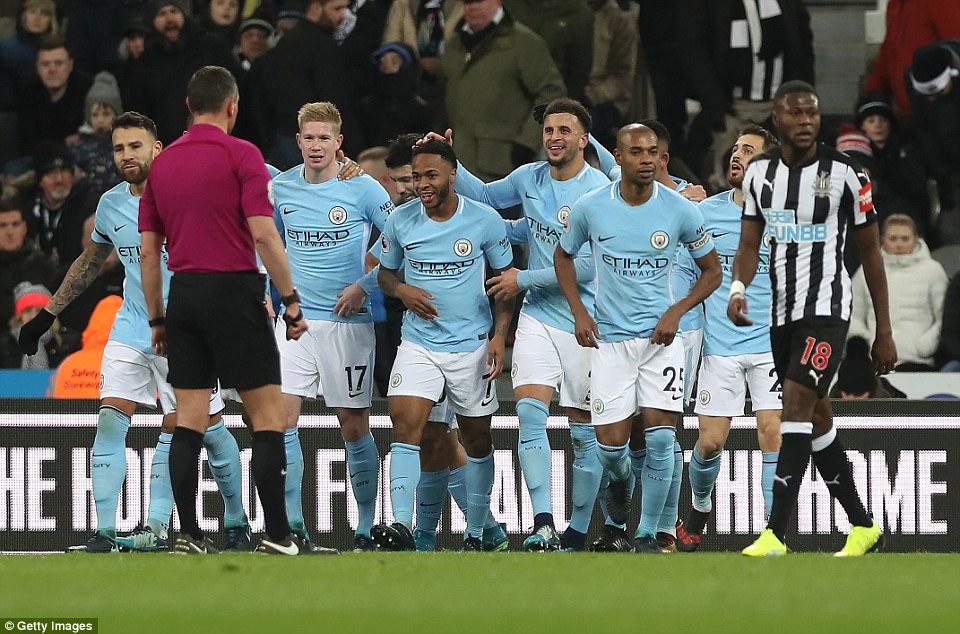 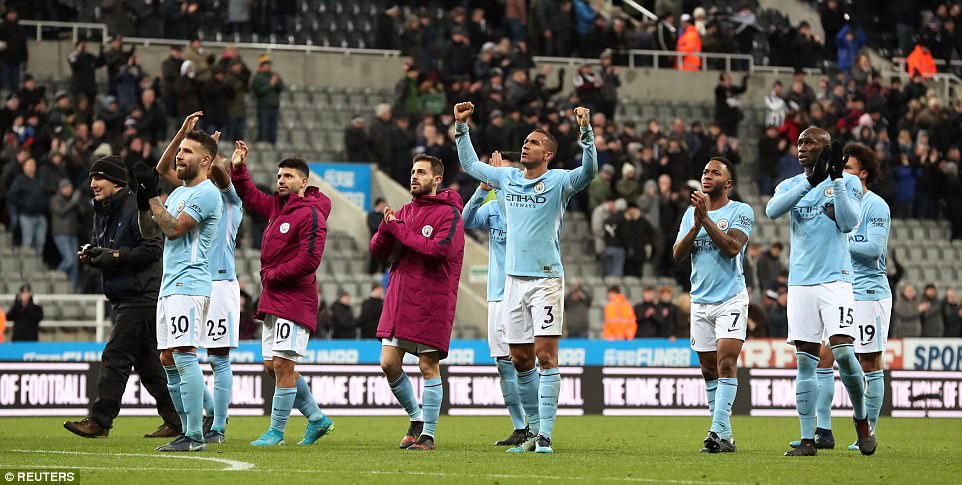 This really was the strangest spectacle. Newcastle began the game with a shot from their own kick-off and then retreated to the edge of their own penalty area and raised the shields not in combat but in what was largely a rather meek symbol of defence.

We have seen teams defend against City, and against other good teams, before. Going toe to toe with a team like this one will not generally get you very far.

But somehow this was different. Newcastle were at home but were so meek it was extraordinary. There was no fast start like you may expect from a team with more than 50,000 people crammed in to watch. There was no press or energy when City had the ball, no attempt to unsettle them or hurry them.

There was only passiveness, only acceptance of what was to come. Only in the last ten minutes did Newcastle emerge and when they did they almost grabbed the most unlikely point. Dwight Gayle stopped to head with two minutes left and missed by only about a foot. 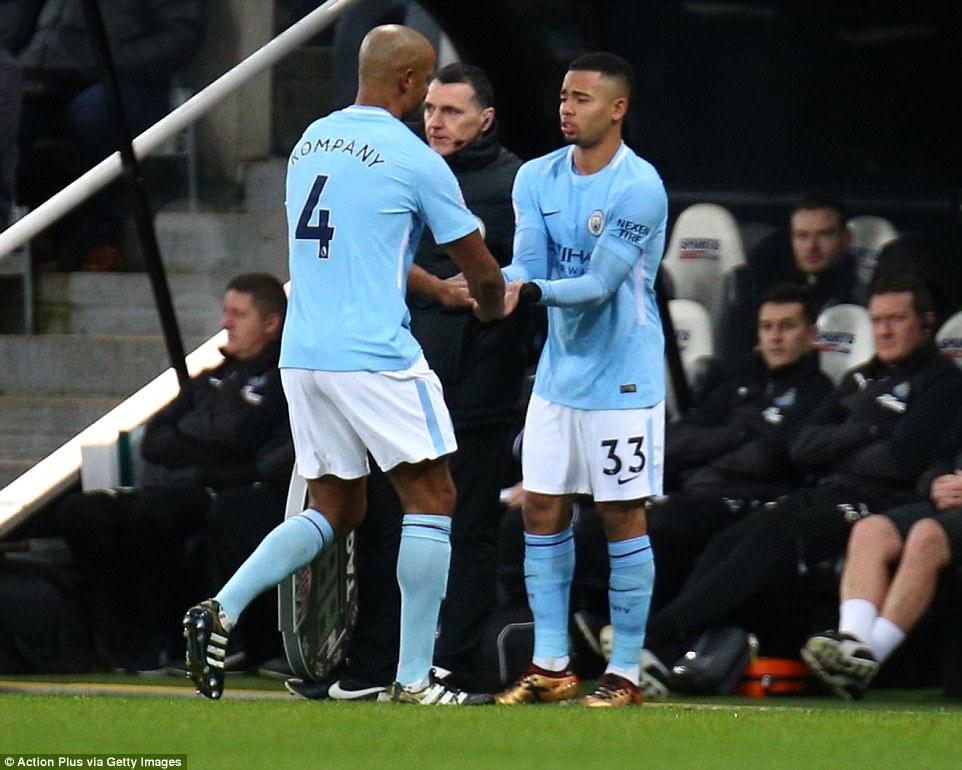 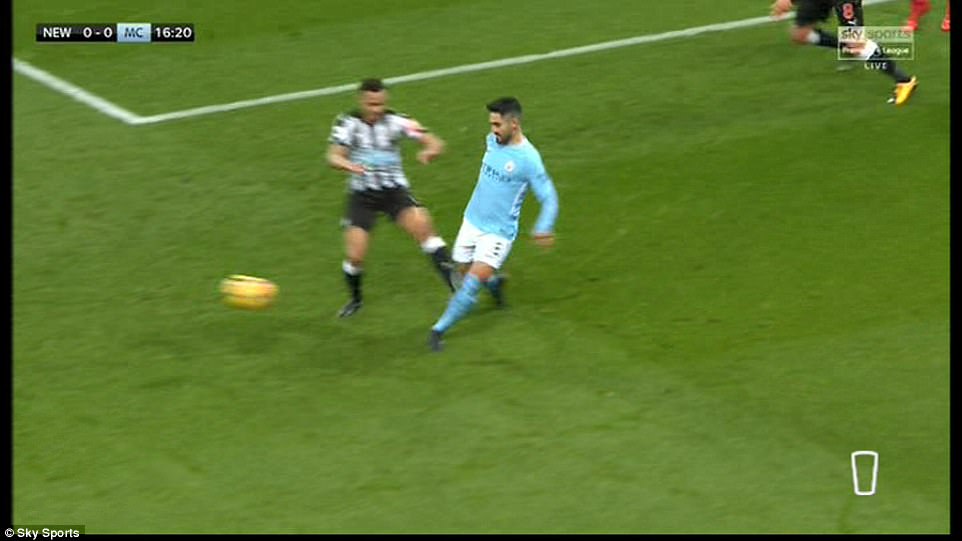 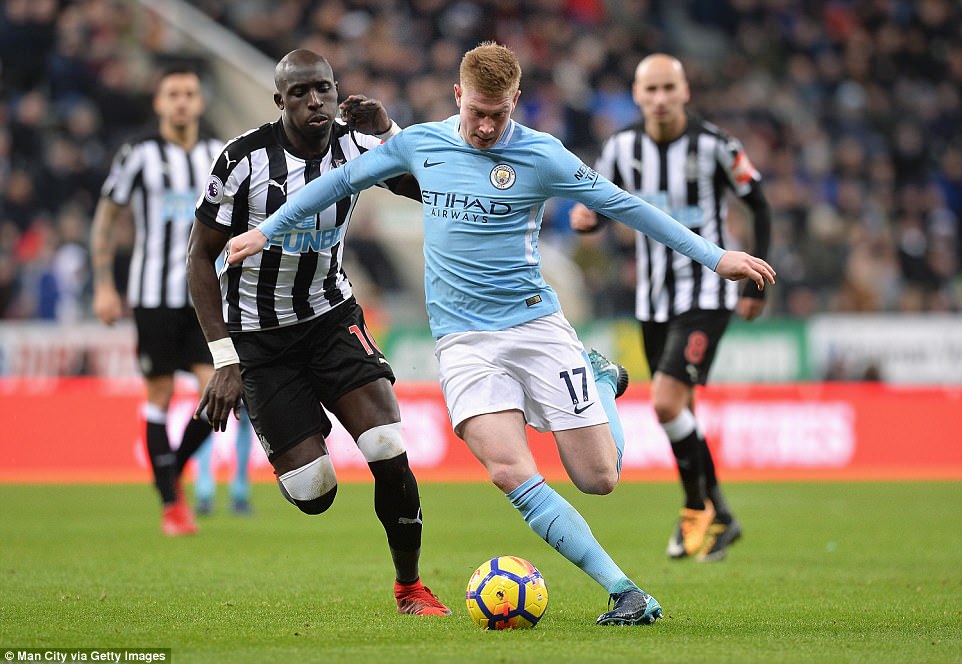 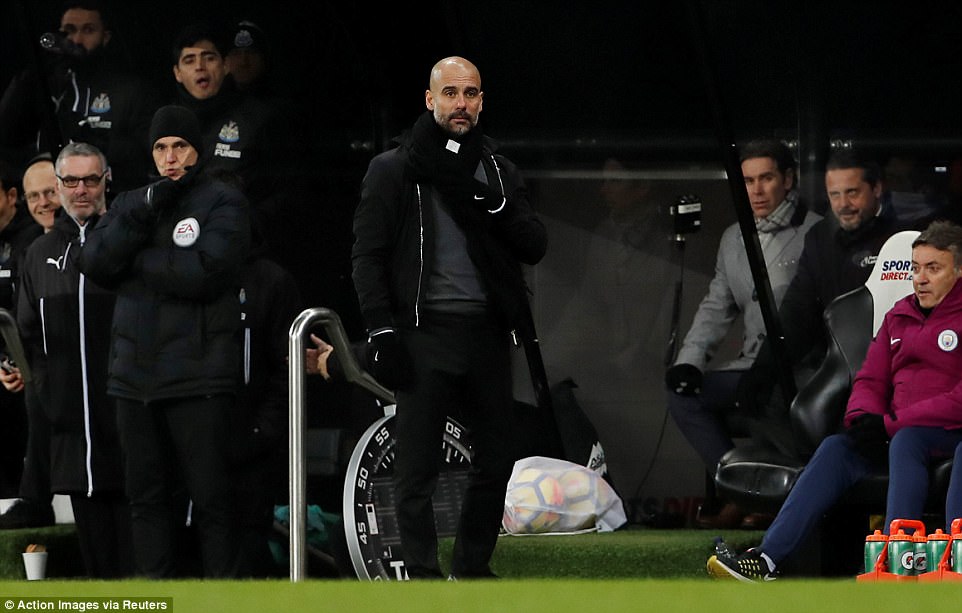 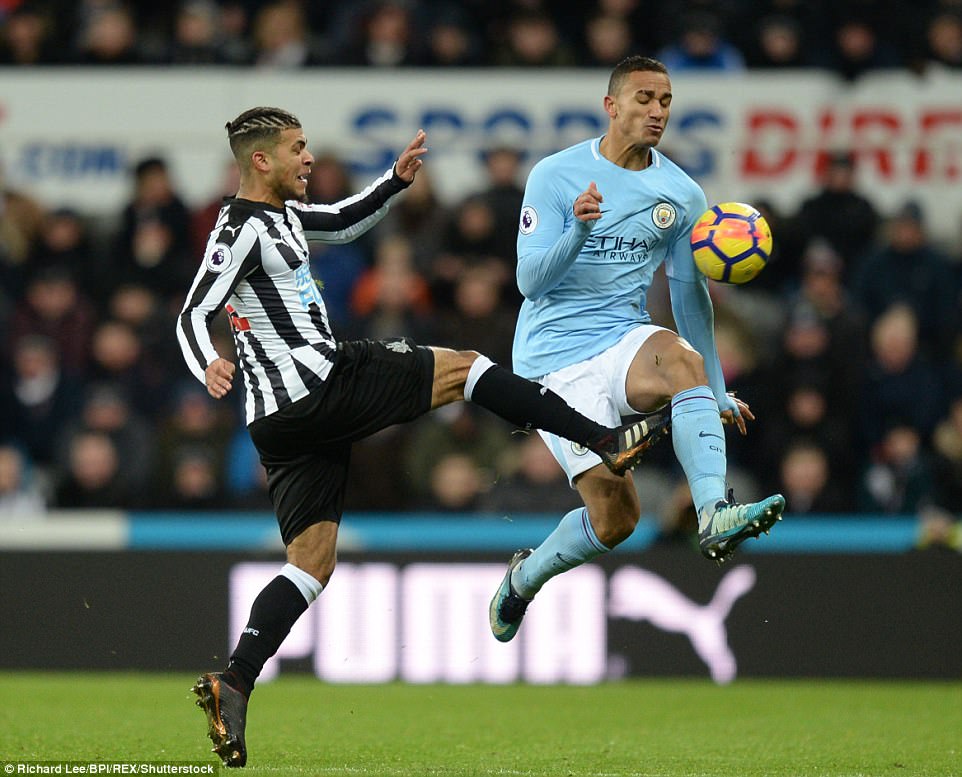 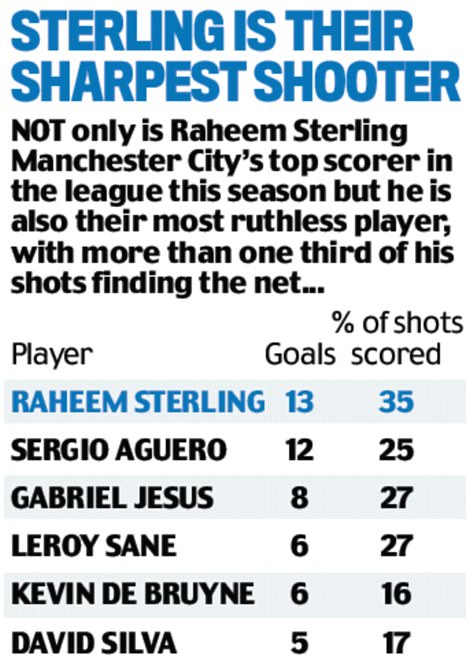 So maybe this was the plan after all. Maybe Newcastle manager Rafael Benitez is a visionary. He is the man who has made a rather modest group of players competitive in this league so we certainly must afford him the assumption that he knows what he is doing.

But this is an assessment more reflective of City and what they have brought to this season than it is of Benitez and Newcastle anyway. There is an argument to say that Newcastle’s next game – at home to Brighton – is much bigger than this one and the one thing Benitez’s team didn’t suffer here is great damage to their goal difference. Maybe there is something to be said for that.

None of that made this any less weird to watch, though. Statistics can often be misleading but here they weren’t.

City completed about 400 more passes than Newcastle in the first half. At one stage the possession percentage was running at 85% to 15% and this was reflected by the subdued nature of the home crowd. In Newcastle they usually see their team have a go but not here.

Benitez’s team sheet suggested a three-man defence but in truth it had five members. From the outset they sat across the edge of their own penalty area and hardly moved. 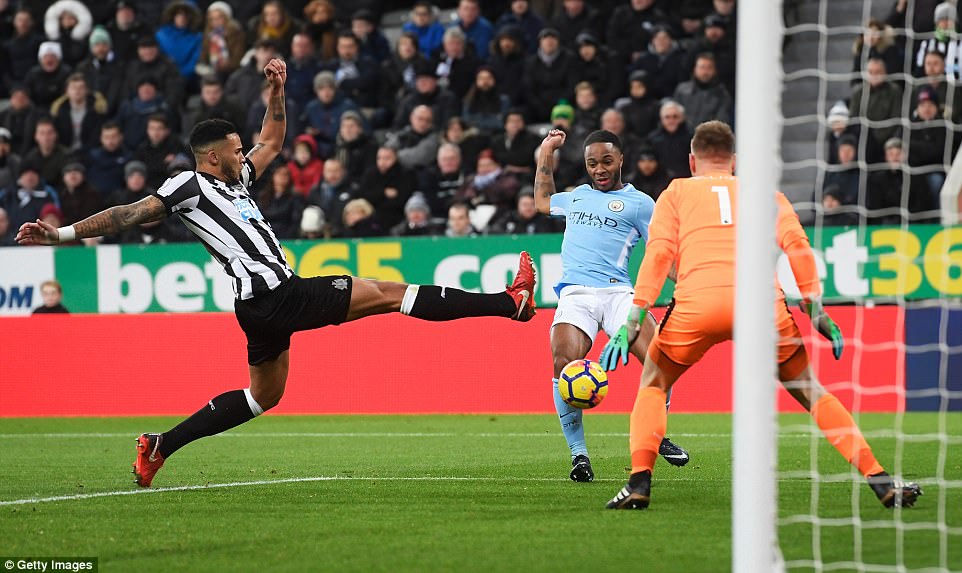 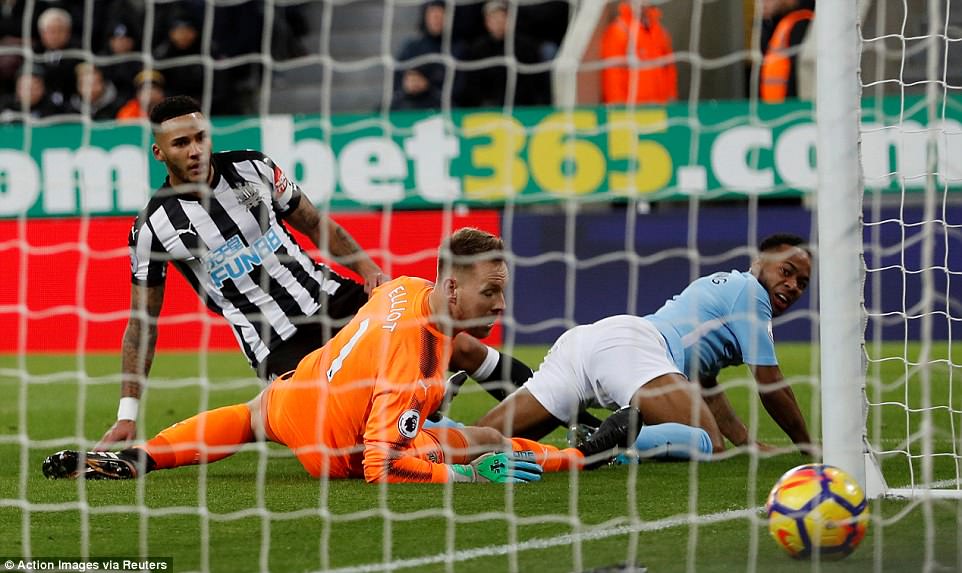 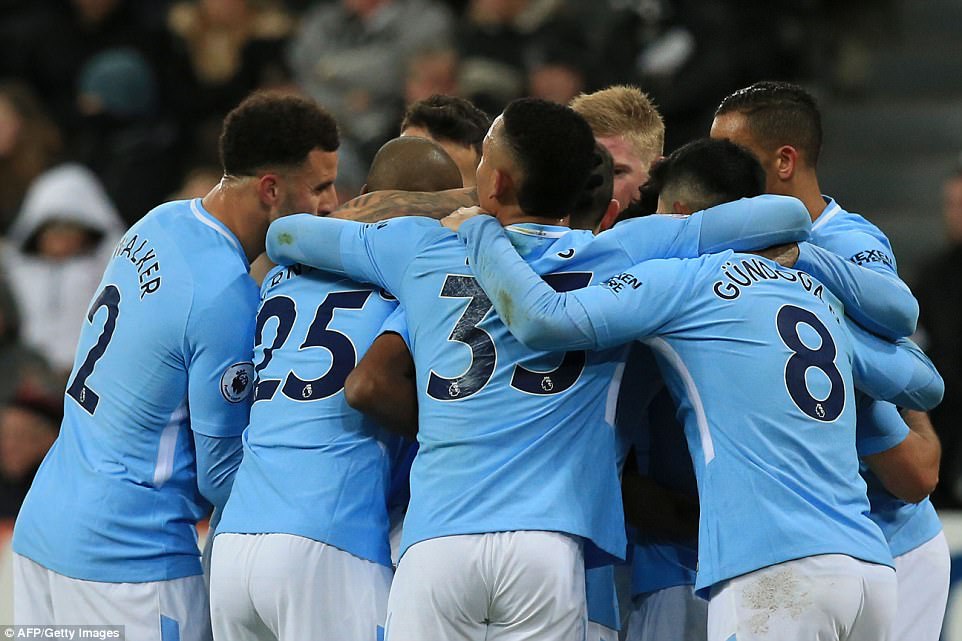 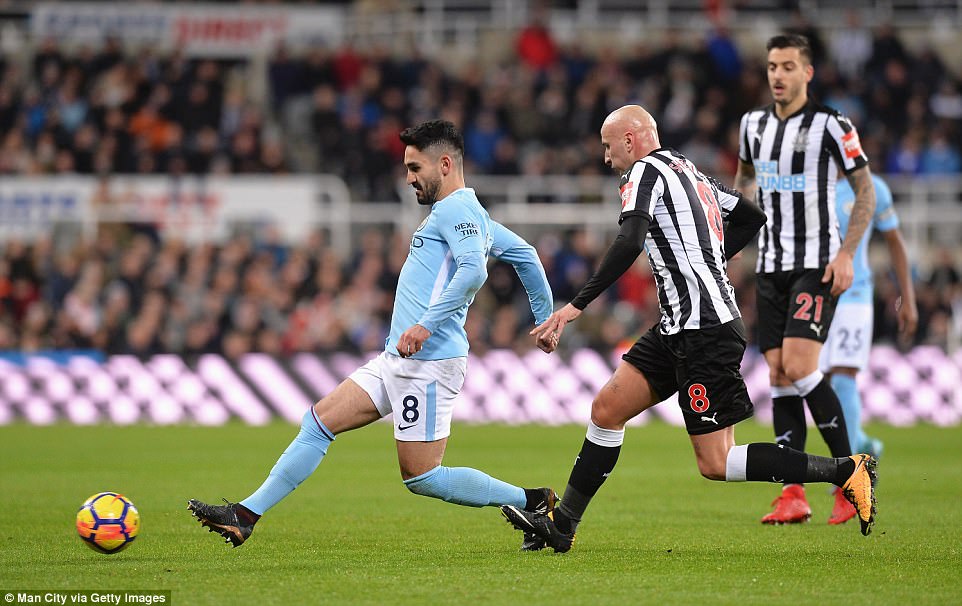 City have been presented with this puzzle before, though usually at home. So Guardiola’s team set about moving the ball around the way that they so often do and looked for the spaces, and the goal, that they doubtless hoped would open up the game.

De Bruyne also shot over twice from distance while Sergio Aguero should have done better than side-foot wide when presented with an early chance by a lovely cross field pass by left-back Danilo.

Then, when the breakthrough arrived on the half hour, De Bruyne was involved. The Belgian’s chipped pass down the inside left channel found Raheem Sterling darting intelligently beyond the Newcastle defence to volley past Elliot with his instep from an angle. Elliot may have done better on this occasion but it was still a very good goal. 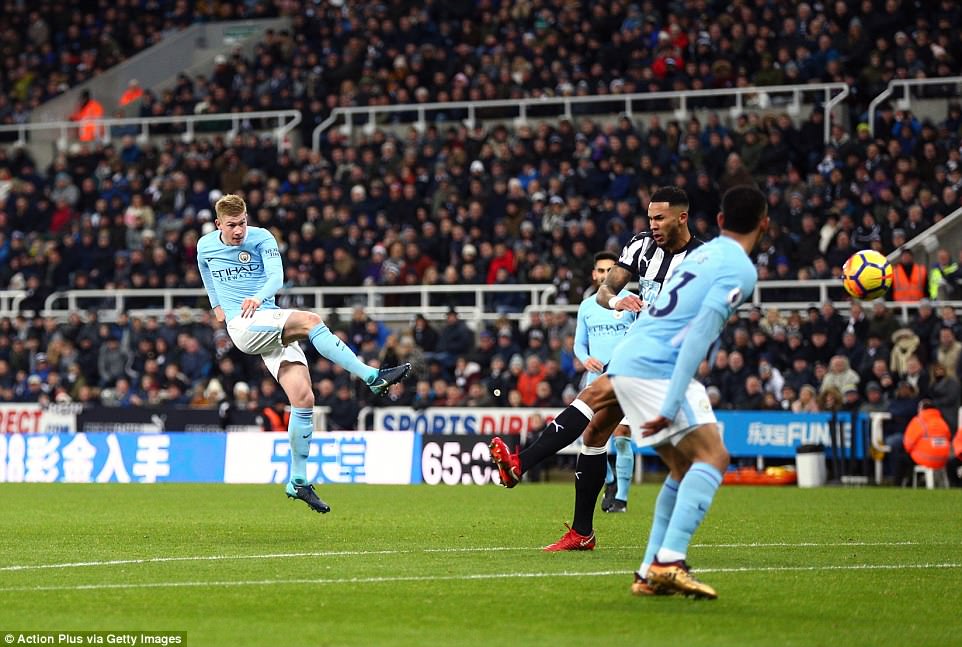 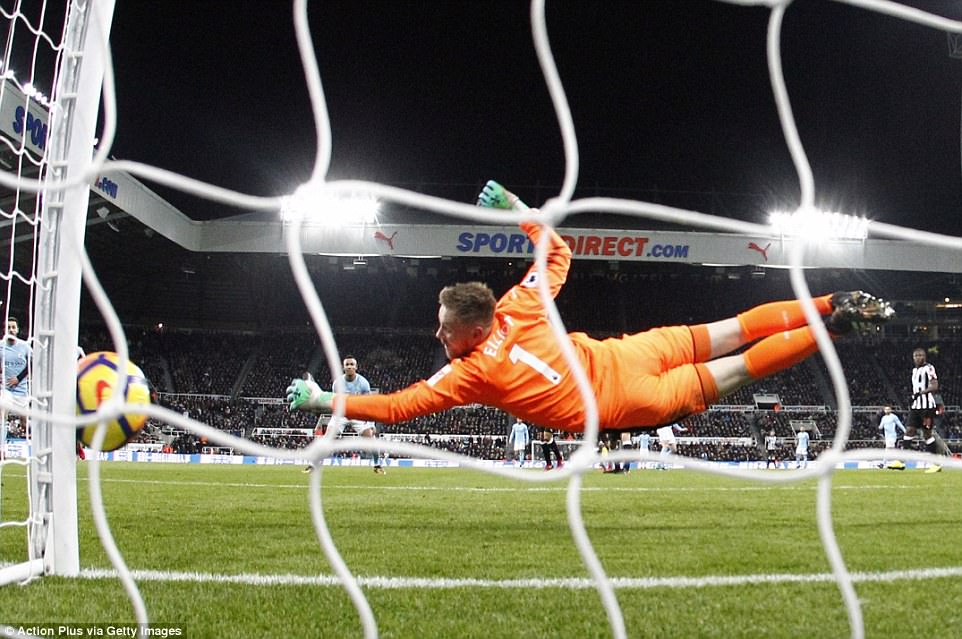 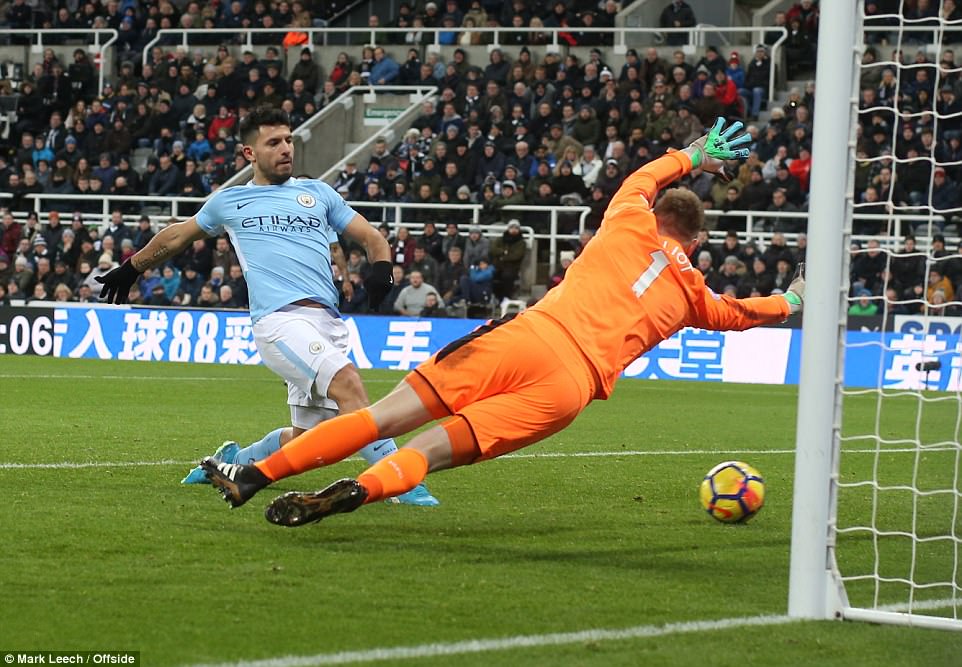 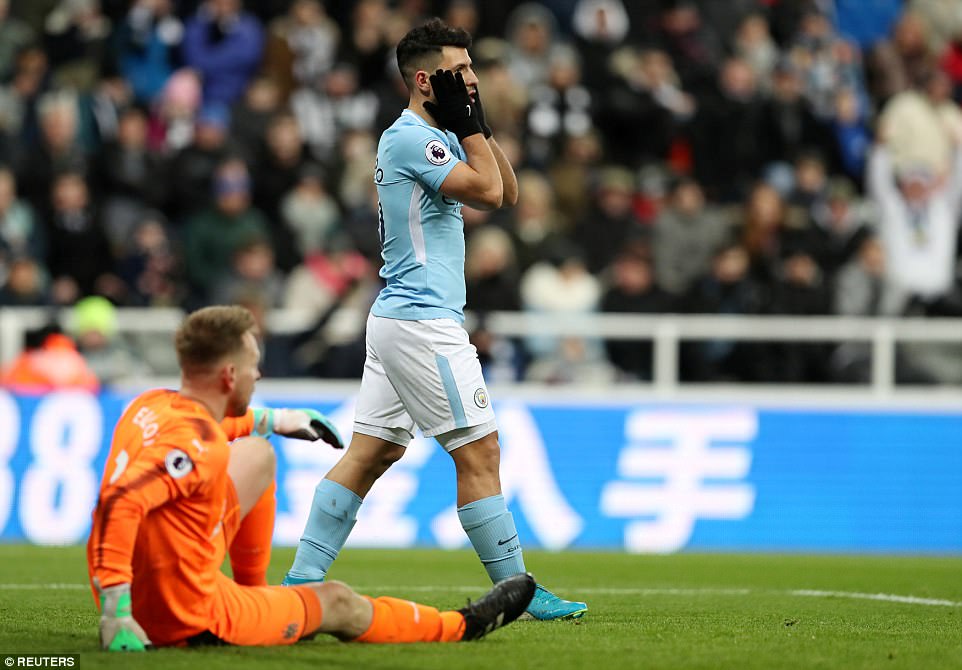 Briefly this drew Newcastle out. Almost immediately Rolando Aarons chipped towards goal after Kyle Walker slipped over and Nicolas Otamendi had to head clear from the line. Hopes grew amongst the home support that Newcastle were about to change their tactics but it was not to be. Not yet anyway.

In to the second half and not much changed at all. The only thing that didn’t come was another City goal and, ultimately, it was this that gave Newcastle a glimmer of hope late on.

De Bruyne miscued early in the second period after a sumptuous one-two with Jesus and then struck a post from distance. Jesus rolled in the rebound but was offside. There was also a low effort from Ilkay Gundogan that was pushed aside by Elliot. 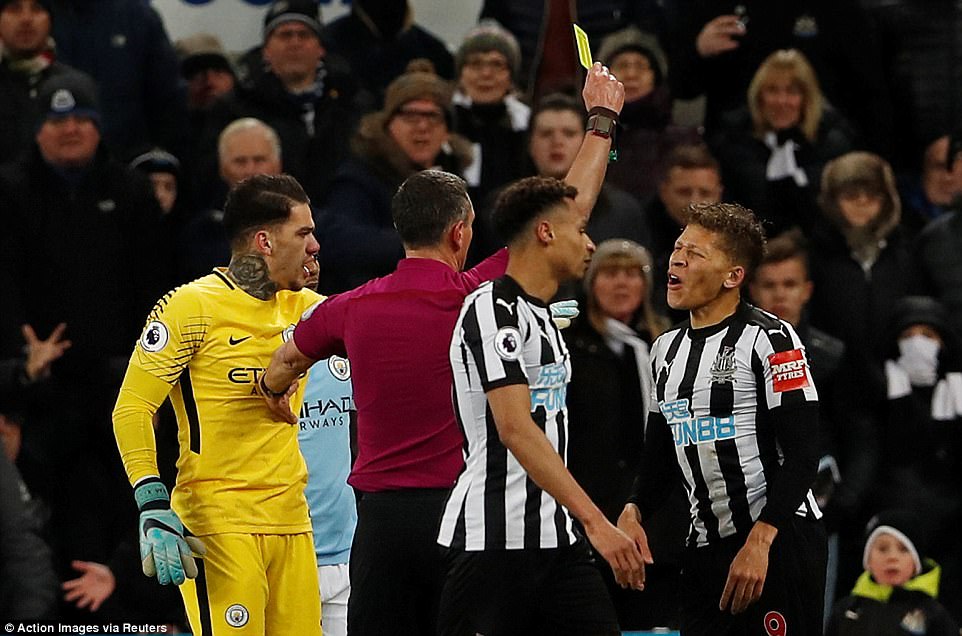 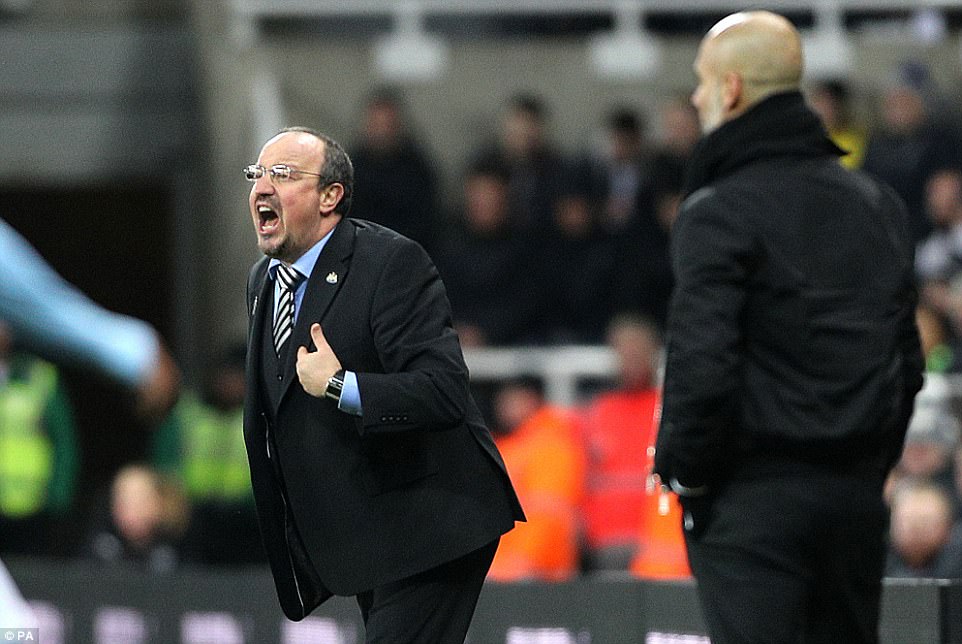 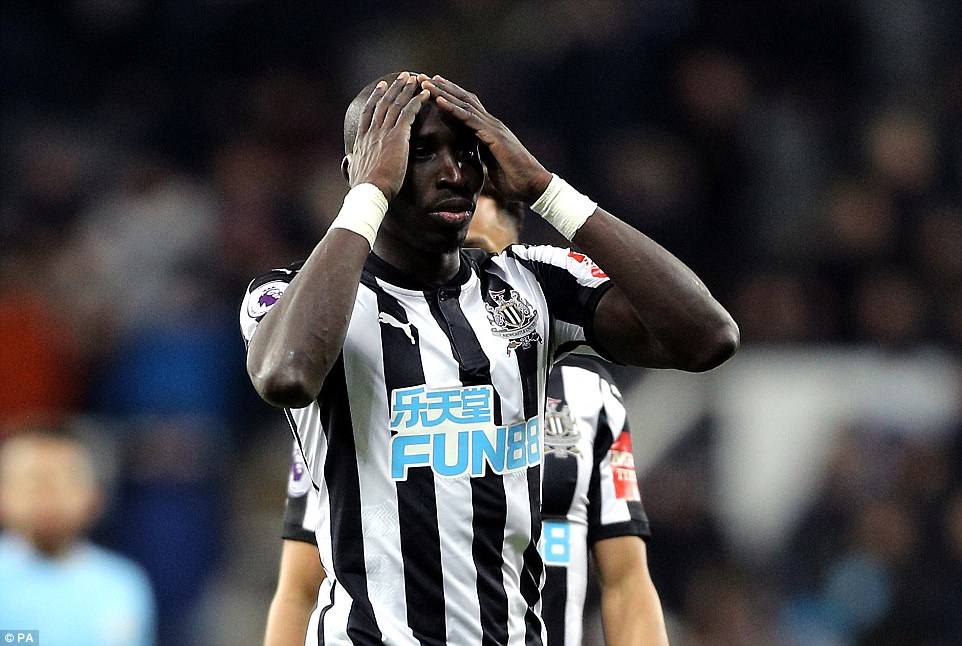 The Newcastle goalkeeper had a decent game on the whole while at the other end City’s Ederson only got warm in the final passages of play.

For Benitez, these were the moments when opportunity briefly showed itself. His players pushed forwards late on as City, strangely, began to lose some of their self-assurance. Was something really quite extraordinary in the offing?

The home crowd clearly thought so and they found their voice. Gayle, on as a substitute, fell under a Danilo challenge in the box but was booked for diving. It was the right call.

Gayle was subsequently to have his chance and, set up by a Christian Atsu cross, his 89th minute header pointed briefly to an incredible climax.

But as it was City’s wagon rolled on. Who can stop them? More pertinently, does anybody really believe that they can? 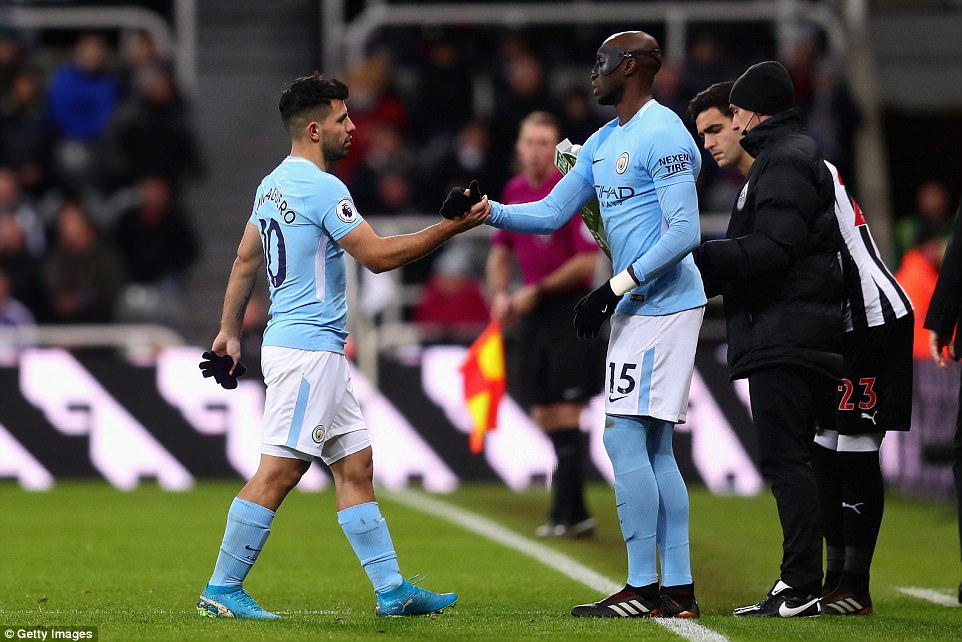 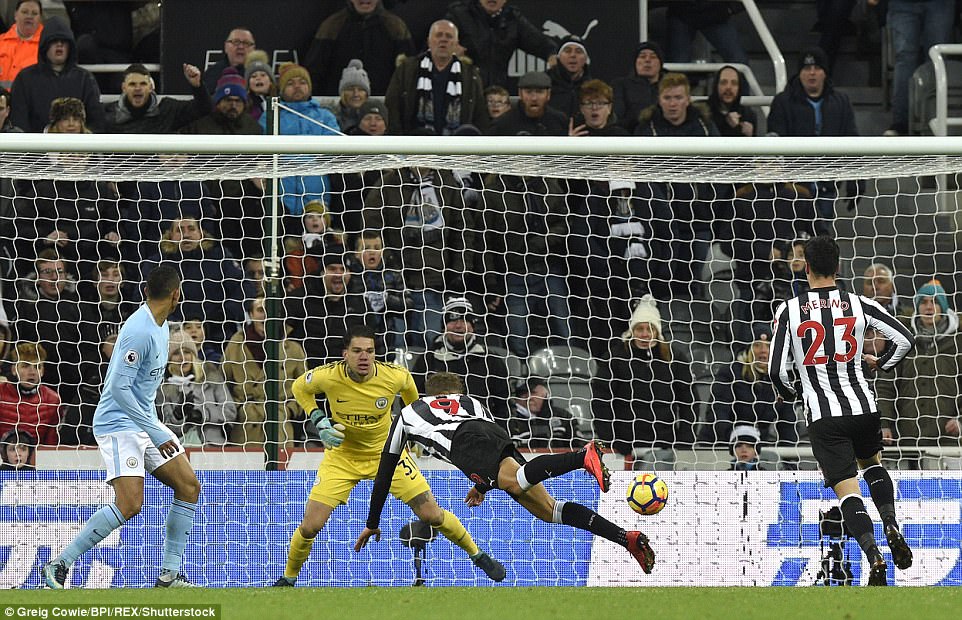 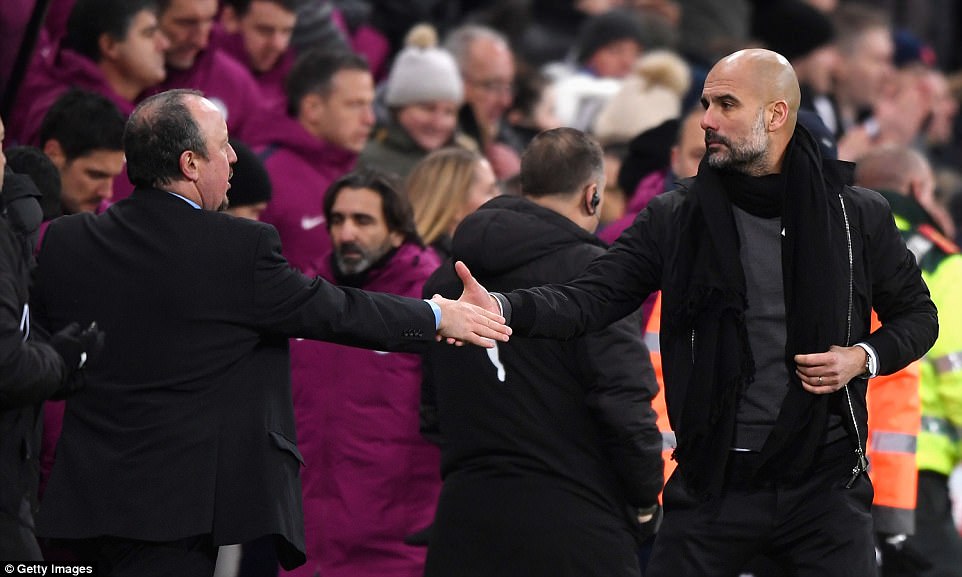 FIVE THINGS WE LEARNED FROM THE MATCH

1. Newcastle cult hero Aleksandar Mitrovic looks to have played his last game for the club after telling a newspaper in his native Serbia, ‘I loved Newcastle but it’s time for me to look more to myself, to find the best solution for my career’. They loved nothing more than a rendition of ‘Mitro’s on fire’ in the Gallowgate End.

Sadly, for his loyal followers, he’s been out in the cold under Rafa Benitez for some time and the manager is desperate to get a few quid for the striker in January, although that will be nowhere near the £13m they paid Anderlecht in 2015. 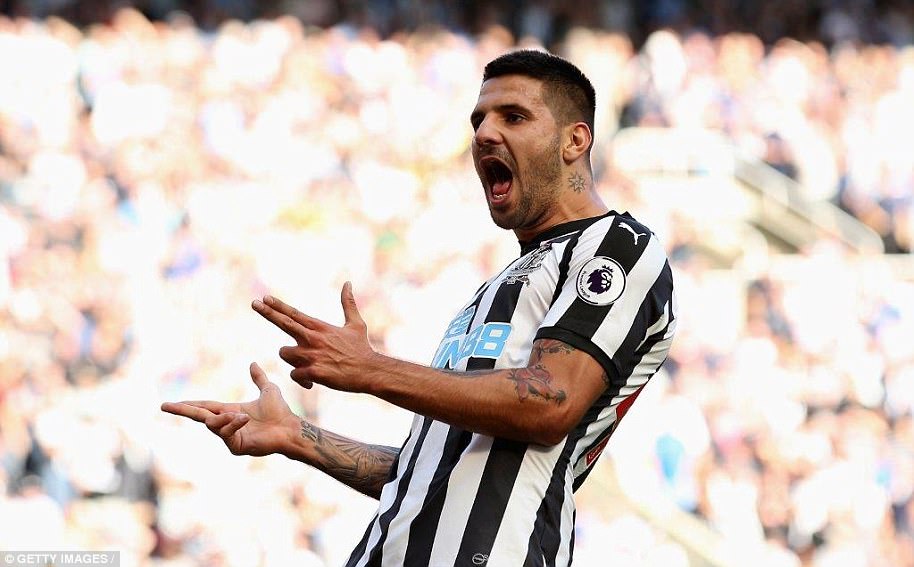 2. The sight of City skipper Vincent Kompany limping off with a calf problem after just 11 minutes could well send Pep Guardiola shopping in the new year and West Brom’s Jonny Evans remains an option.

This was Komapny’s ninth appearance of the season but, again, it would appear his body has let him down, especially judging by the manner in which his fist thudded the roof of the dugout after his withdrawal.

3. Gareth Southgate was in the stands to watch six English starters, and at least Newcastle captain Jamaal Lascelles had plenty of opportunities to showcase his defending. Although the England boss would not have been too impressed by his part in Raheem Sterling’s opener, failing to show enough urgency in closing down the City winger.

Sterling’s 17th of the season, however, is yet more evidence of his progress and Southgate will be looking at him as an almost certain starter ahead of next summer’s World Cup. 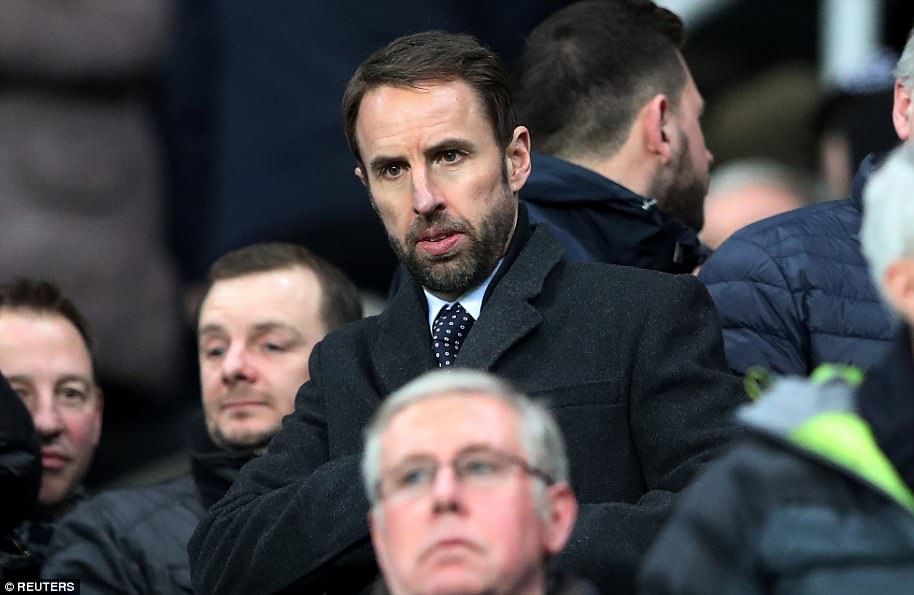 4. Do not be surprised if City goalkeeper Ederson is ruled out of Sunday’s trip to Crystal Palace with hypothermia. On a bitter night on Tyneside the Brazilian was a virtual spectator and, at one point in the second half, could be seen rubbing his arms in an effort to keep warm.

It still did not stop a sell-out crowd of 52,311 turning up, however. And this for a fifth consecutive home defeat, Newcastle’s worst run since 1953.

5. Any other manager would do well to survive that damning statistic, but Benitez is bulletproof in these parts and there was not a single voice calling for him to go last night. Fans appreciate he has been let down by owner Mike Ashley, who afforded him just £35m to spend in the summer.

They are paying the price for that now and both Benitez and supporters are praying that Amanda Staveley’s proposed takeover of the club makes significant progress in the coming weeks and transfer funds are freed before the end of January.