Allan Saint-Maximin was in a very generous mood on Saturday as he gifted a fan a Rolex watch after Newcastle’s win against Nottingham Forest.

Eddie Howe’s side kicked off their Premier League campaign with a comfortable win over their newly-promoted opponents, with second half goals from Fabian Schar and Callum Wilson sealing a 2-0 victory.

Following the match, Saint-Maximin went to greet supporters and he made a remarkable gesture as he handed over the expensive watch to Newcastle supporter Steve Dutton. Clearly stunned by Saint-Maximin’s kindness, Dutton shook the forward’s hand and thanked him for his generosity. 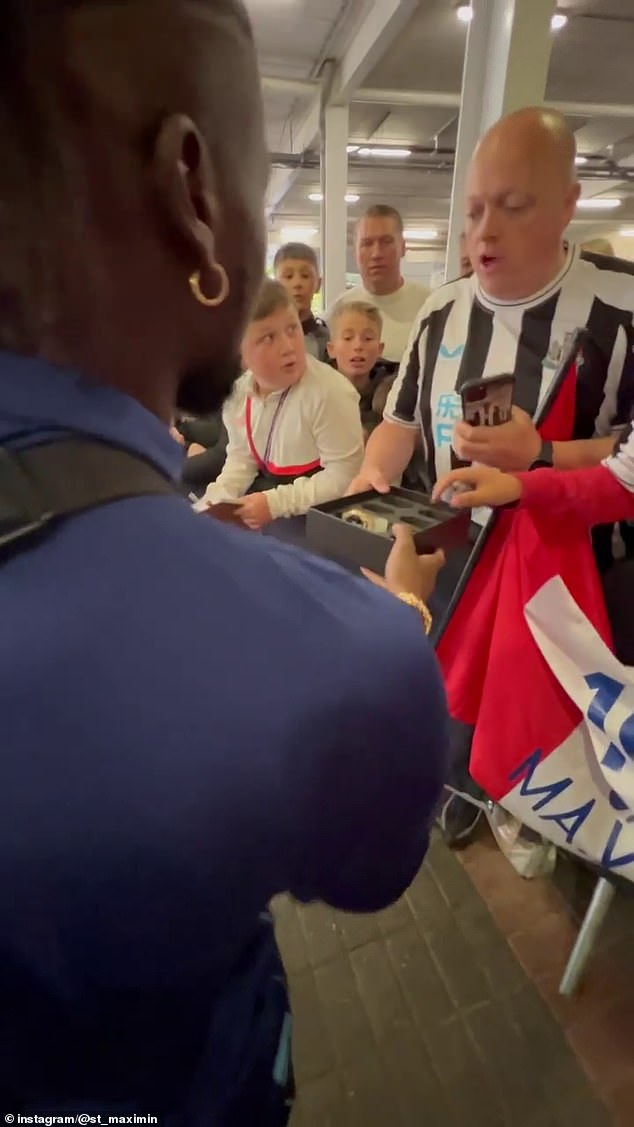 He then handed the box over to a fan, who was stunned by Saint-Maximin’s generosity

Dutton was still in disbelief later in the evening as he praised the Frenchman’s kindness on Twitter.

‘I was the person who was gifted the watch from ASM, I was totally speechless,’ Dutton wrote.

‘I thought he was coming to sign autographs and have pictures taken with the kids. I’m still in shock, I can’t thank @asaintmaximin enough.’

The Chronicle posted a video of the incident on social media, hailing Saint-Maximin as a ‘man of the people’, which the 25-year-old retweeted.

He has now given away two watches within the last 12 months, after he handed Newcastle supporter Michael Urwin a TAG Heuer Aquaracer in November 2021.

The winger was evidently in good spirits after Newcastle’s opening day win as he sent out a tweet which read: ‘Black & White forever’.

Saint-Maximin has been linked with a move away from St James’ Park this summer, with Tottenham and Chelsea expressing an interest in him, but his Twitter post appears to indicate that he is very happy at Newcastle and does not intend to leave the club any time soon.