Wrapped up against the bitter cold, some bearing their few remaining possessions on their shoulders, men, women and children queue up in neat rows of five and wait… to find out whether they are going to live or die.

Behind them, mothers and their children — each wearing a yellow star to denote their religious status — continue to pour out of the train, often leaving their suitcases behind them, as they are herded into lines.

Those immediately selected for death will be guided towards the gas chambers. The rest are deemed suitable for work and will have their heads shaved before being marched off to the labour camp where they will endure the harshest conditions.

Taken in 1944 by a German photographer billeted to Auschwitz-Birkenau in southern Poland, these extraordinary images are the only known record of scores of Jewish families who arrived at the Nazis’ most notorious extermination camp where 1.1 million people died or were killed between 1940 and 1945.

Herded like cattle: Newly arrived Jewish inmates are forced by SS officers into two queues — one destined for the gas chambers 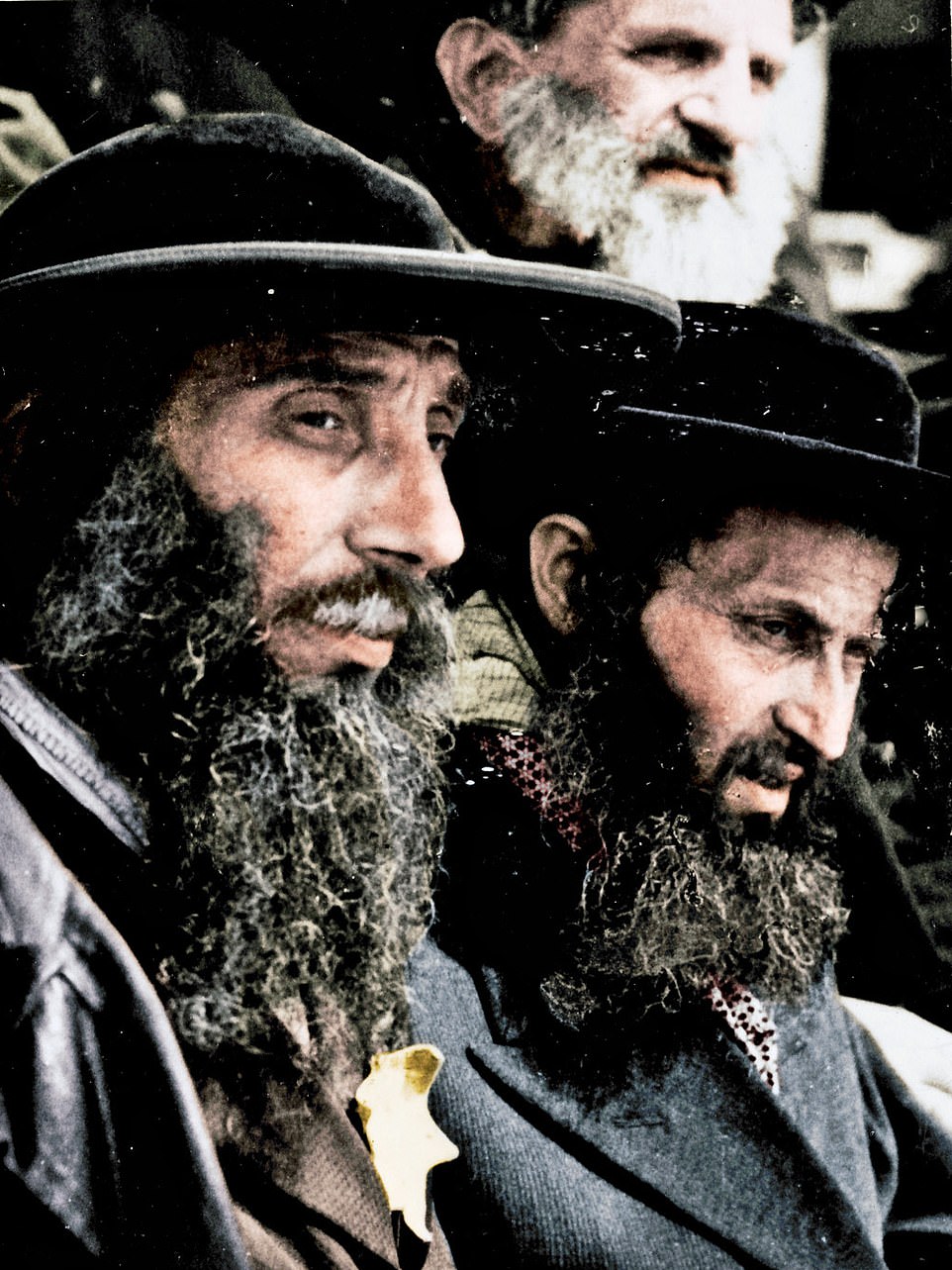 Witnesses to evil: Orthodox Jews realise that time is running out as they see their families being herded away

And now — ahead of the forthcoming Channel 4 documentary, Auschwitz Untold, which commemorates the 75th anniversary of the liberation of the concentration camp — some 37 of the photographs have been recast in colour for the first time, bringing alive the horror of Holocaust for a new generation.

In the documentary, Holocaust survivor Judith Altmann, 95, who was arrested in 1944 and transported from her home in Czechoslovakia to Auschwitz, says: ‘I’ve seen it and I cannot erase it from my mind. We were wearing colours. We were not all in grey.’

That we are able to witness these photographs — let alone in full colour — is as remarkable as the harrowing stories they depict.

The album, which contains 193 photographs over 56 pages, was discovered by another survivor, Lilly Jacob, the 18-year-old daughter of a horse trader.

She came from the small town of Bilke in Hungary, and with her family had been sent to a ghetto in the Carpathian Mountains where she had slept on the floor of a brick factory. 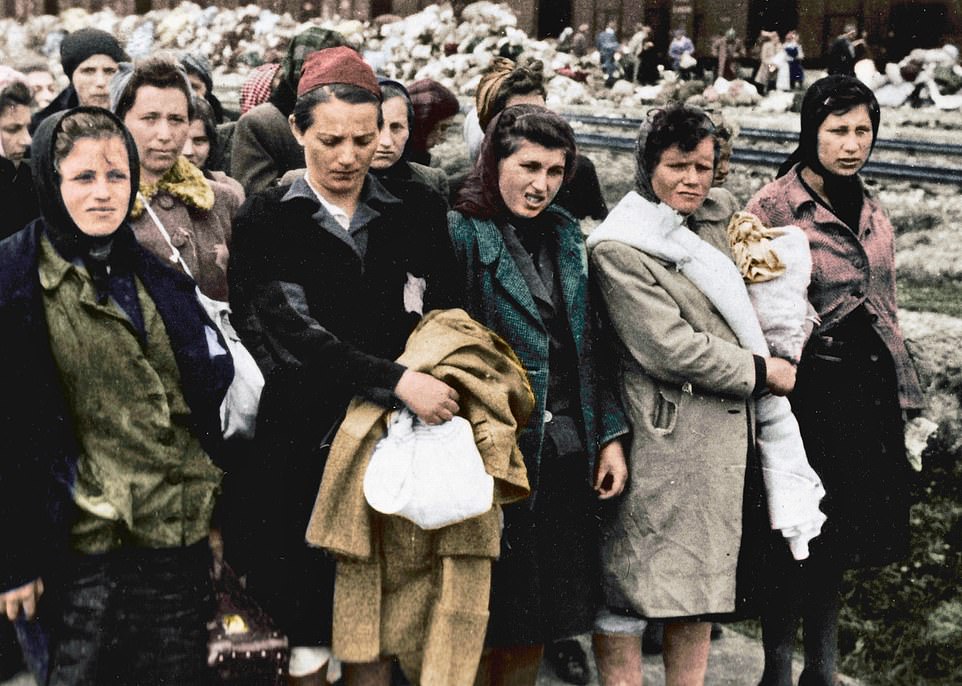 Slaves of the Reich: A group of Jewish women selected for slave labour, with the discarded belongings of those sent straight to their deaths piled up in the background. They would be sent to other camps to work on armaments and rockets 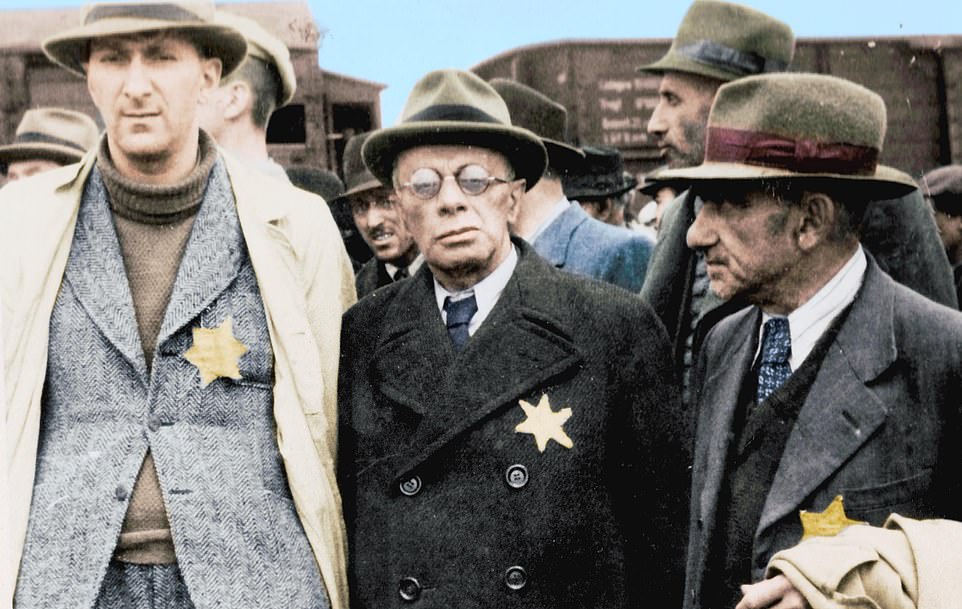 Those immediately selected for death will be guided towards the gas chambers. The rest are deemed suitable for work and will have their heads shaved before being marched off to the labour camp where they will endure the harshest conditions

In May 1944, Lilly and her family were put on a train to Auschwitz. Her parents and five brothers were immediately dispatched to the gas chambers.

Lilly was transferred to a series of Nazi labour camps before ending up in Mittelbau-Dora camp in Germany, where the inmates were forced to help manufacture V-2 rocket missiles.

There, Lilly contracted typhus just days before the American forces liberated the camp, and was hospitalised in a vacated SS barracks.

Freezing cold in her ragged prison garb, and with only thin blankets available to her, she went looking for more clothes in a cupboard in the barracks.

It was there, nestled under a pyjama jacket, that she discovered the album. Leafing through its pages, she discovered a photograph of two of her brothers — Israel, eight, and Zelig, 10. 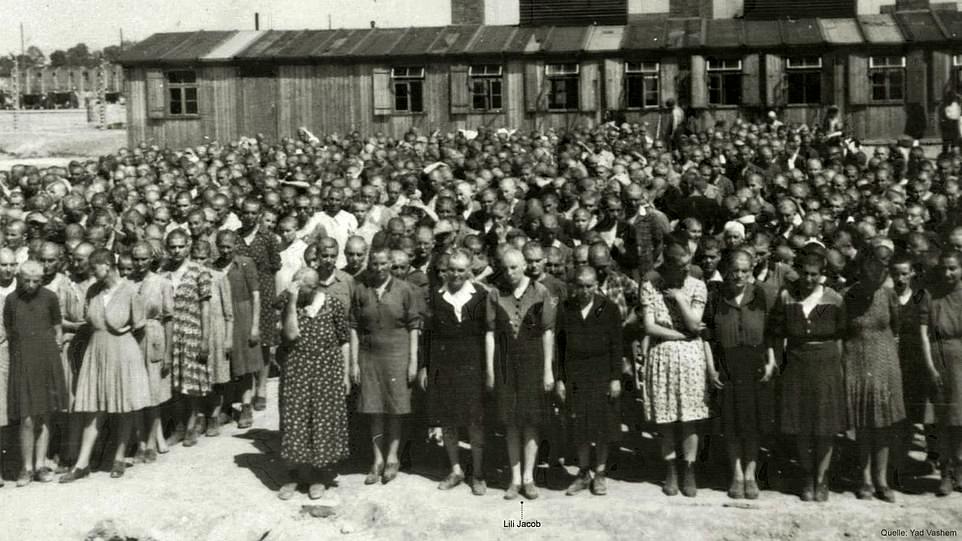 Shaven-headed Lilly Jacob (centre). Lilly was transferred to a series of Nazi labour camps before ending up in Mittelbau-Dora camp in Germany, where the inmates were forced to help manufacture V-2 rocket missiles 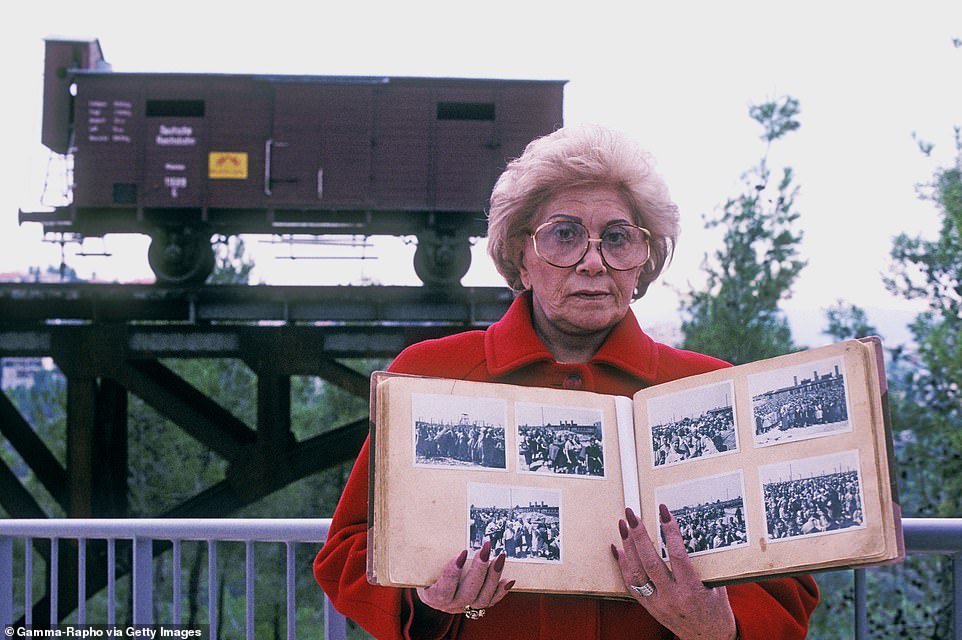 Lilly Jacob with the photo album she discovered in Mittelbau-Dora camp. After the war, Lilly took the album back with her to Bilke, where she would turn up at the station to meet the train every day in the hope that some members of her family had survived. Not one of them ever returned

Speaking 20 years later at the Frankfurt Trials, which were held between by 1963 and 1965 with the sole purpose of charging 22 Nazis who had served at Auschwitz, she said: ‘I recognised a picture of the rabbi who married my parents. And as I was leafing through, I recognised my grandparents, my cousin, even myself.’

After the war, Lilly took the album back with her to Bilke, where she would turn up at the station to meet the train every day in the hope that some members of her family had survived. Not one of them ever returned.

She married a local butcher and they moved to Miami, Florida to begin a new life — she worked as a waitress — far from the horrors she had experienced and the challenges of post-war Europe.

But word of the album in her possession soon spread among Auschwitz survivors, many of whom still didn’t know or refused to believe the fate of their family members.

In search of answers, they came from across the world to Lilly’s home to see the album in the hope that they might recognise a loved one.

On the rare occasion that someone did identify a family member, Lilly would give them the photograph. 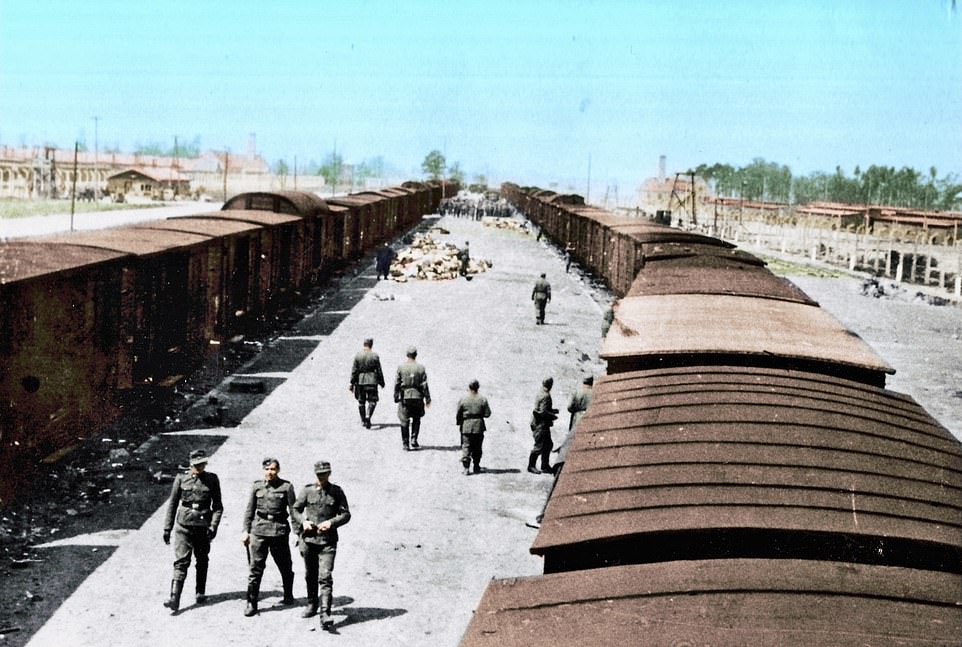 Entrance to hell: German guards await the shuttered transport trains at Auschwitz-Birkenau concentration camp in Poland. The camp’s crematoria can be seen in the far haze 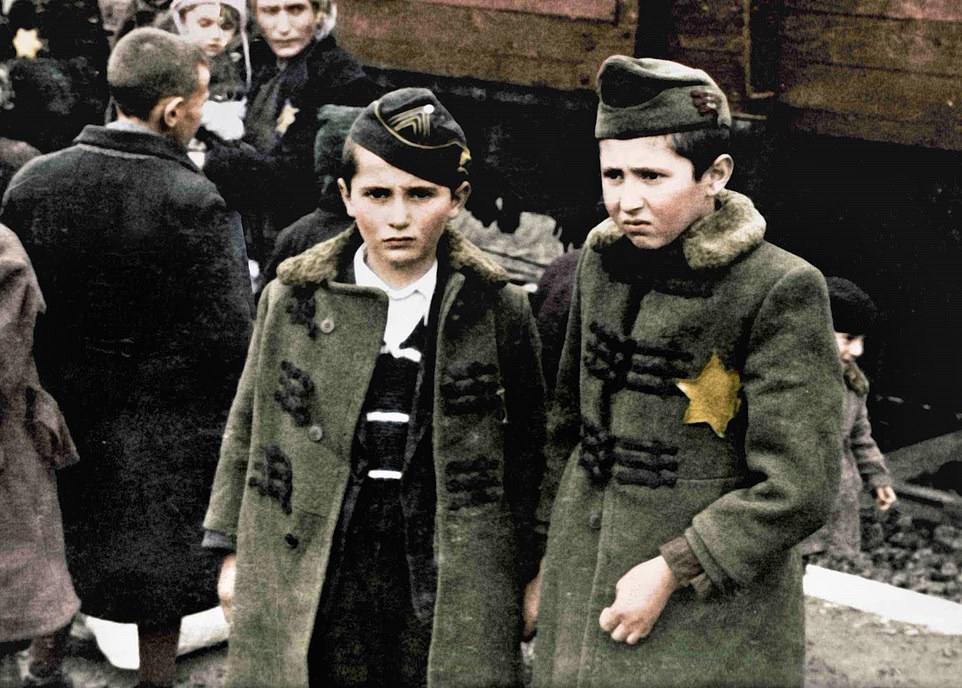 Lilly’s doomed brothers: Lilly Jacob found this photograph of her brothers Israel (left) and Zelig. They perished with her three other siblings and their parents

It was only in 1980 that renowned Nazi hunter Serge Klarsfeld, a Romanian Jew, tracked Lilly down and convinced her that the album should be safeguarded at Israel’s World Holocaust Remembrance Centre, Yad Vashem.

She agreed and flew to Jerusalem to donate it in person. En route, she visited Auschwitz, to honour those who had died there and to bury her ghosts.

Lilly Jacob died in 1999. Her photographs, now immortalised in colour, live on for all to see and bear witness to the evil rule of Nazi Germany.