Newly created membrane removes 99.9% of salt from seawater and make it drinkable within MINUTES

Scientists have created a new technology they say can remove nearly all of the salt from seawater, potentially solving one of the world’s largest health problems.

The membrane not only removes 99.9 percent of salt from seawater, but it lasts up to a month, whereas previously solutions only lasted for about 50 hours before they need to be replaced.

Scientists have created a new technology they say can remove nearly all of the salt from seawater, potentially solving one of the world’s largest health problems

The membrane was able to operate without wetting and fouling issues due to its low sliding angle, as well as its thermal conductivity properties.

However, it does have drawbacks, notably temperature polarization and a decrease in water vapor flux because of how it conducts heat.

The World Health Organization suggests good quality drinking water should have a total dissolved solid (TDS) of less than 600 parts per million (ppm). 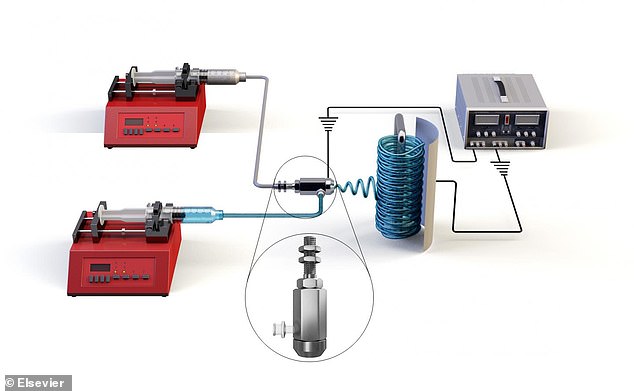 The coaxial electrospun nanofiber membrane removes 99.9% percent of salt from seawater and it lasts up to a month. Previously solutions lasted for about 50 hours before they need to be replaced

Although previous technologies operated for less than 50 hours, they did have a high water vapor flux performance.

‘The co-axial electrospun nanofiber membrane have strong potential for the treatment of seawater solutions without suffering from wetting issues and may be the appropriate membrane for pilot-scale and real-scale membrane distillation applications,’ the study’s lead author, Dr Yunchul Woo, said in a statement.

The potential solution is enormous, given that roughly 785 million people do not have access to clean drinking water, according to 2019 data from the World Health Organization.

Additionally, roughly 2 billion people across the globe use a drinking water source that is contaminated with feces, the WHO added.

Contaminated water can cause significant disease, such as diarrheas, cholera, dysentery, typhoid, and polio.

The WHO explained that by 2025, ‘half of the world’s population will live in water-stressed areas.’

The membrane was created by alternative nano-technology, also known as electrospinning, to help prevent the membrane from getting too wet, as well as its long-term stability.

The nanofibers in the membranes allow for a higher surface roughness and the ability to repel water, also known as hydrophobicity.

Other solutions have struggled with membrane wetting, which is why they have to be replaced so often and up until this point, that filtration system had not been feasible for long-term operations.

This technology created by the KICT researchers starts with poly(vinylidene fluoride-co-hexafluoropropylene) as the core, mixed with silica aerogel and a low concentration of polymer as the sheath, which allows the team to get the hyper-repellent membrane surface.

The study was published in April in Journal of Membrane Science.

Previous attempts to turn seawater into drinking water have included using a metal-organic framework to desalinate it, using sunlight as power.

Other attempts have included using the temperature differences between surface and deep sea water to make sea water drinkable; and using graphene to create a membrane to filter the sea water into drinking water.

Water that is saline contains significant concentrations of dissolved salts.

In this case, the concentration is the amount (by weight) of salt in water, as expressed in “parts per million” (ppm).

The following are the US government’s parameters for saline water:

The scarcity of freshwater resources and the need for additional water supplies is already critical in many arid regions of the world.

Many arid areas simply do not have freshwater resources in the form of surface water such as rivers and lakes.

They may have only limited underground water resources, some that are becoming more brackish as extraction of water from the aquifers continues.

Solar desalination evaporation is used by nature to produce rain, which is the main source of freshwater on earth.