They provided a cherished service to their local areas for generations but have since fallen on hard times.

As these stunning black a white images show, the traditional corner shop in its glory days came in many shapes and sizes, from tumbledown cottages to stout brick buildings standing proudly at the top of the high street.

The photographs, which were taken from 1860 and 1970, are part of the Francis Frith Collection – an archive of thousands of historic photos and maps from across the UK.

They bear fascinating witness to the changes that took place in around 8,000 cities, towns and villages throughout Britain over more than a century of incredible transformation.

The waning of the corner shop in the 1990s was the result of a variety of factors, including an increase in competition prompted by a 1994 law that allowed larger stores to open on Sundays.

The retirement of the first generation of immigrants, who often took over the shops in the 1960s, has also contributed to their decline.

These photographs of corner shops, which were taken from 1860 and 1970, are part of the Francis Frith Collection – an archive of thousands of historic photos and maps from across the UK. They reflect a time when the stores provided a cherished service to their local communities. This image, taken in 1920, shows G. Penny on St Paul’s Street, Tiverton 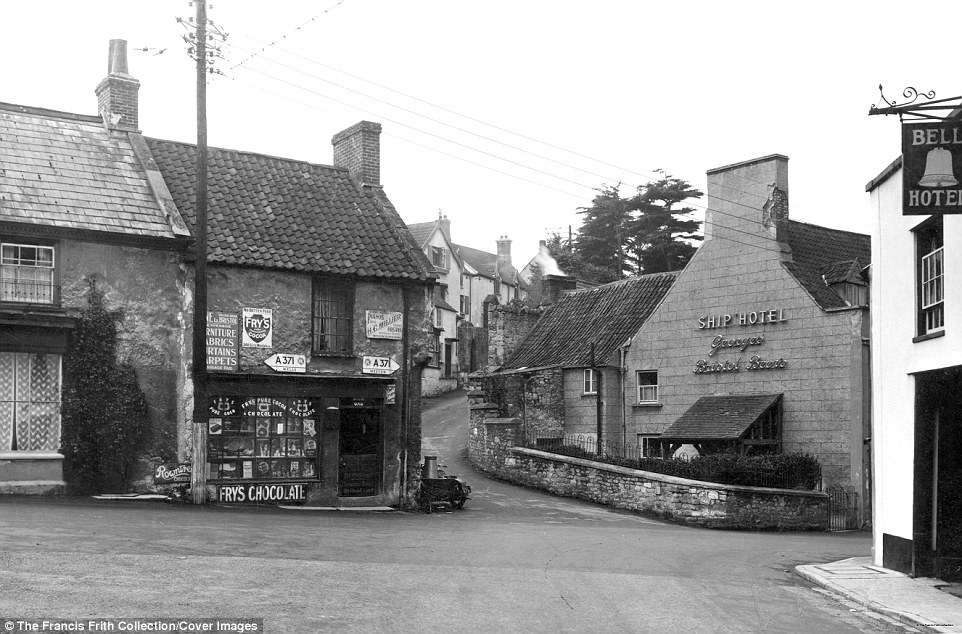 The black and white photographs bear fascinating witness to the changes that took place in around 8,000 cities, towns and villages over more than a century of incredible transformation. Pictured is the corner shop on Castle Hill in Banwell in a photograph from circa 1955 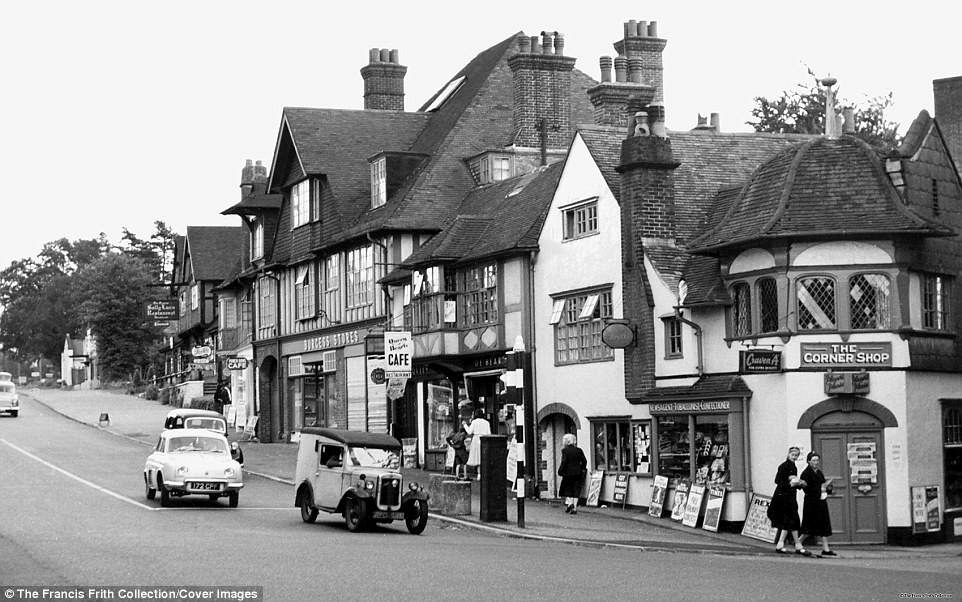 Sundays and evenings were a protected time for corner shops, because before 1994 the 1950 Shops Act meant that only outlets selling ‘perishable’ items could open on Sundays, and most shops that were not off licences had to close at 8pm. But since supermarkets started opening on Sundays the corner shop has faced stiff competition. However, consumers have benefitted from the free competition by gaining more choice and lower prices. Pictured is London Road in Hindhead circa 1965 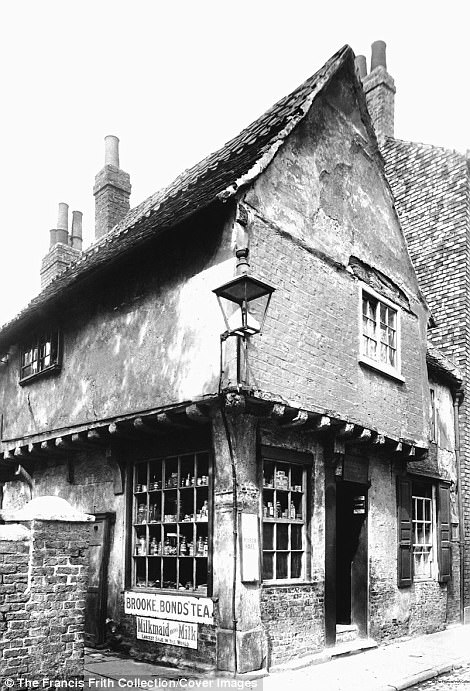 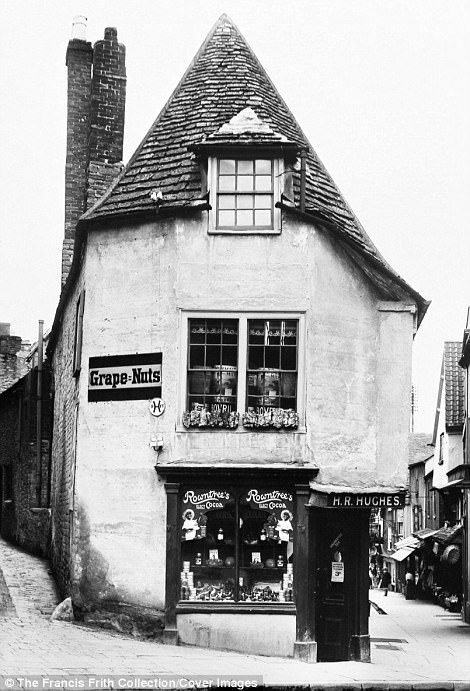 Corner shops have also suffered from the growth of petrol stations selling newspapers, food and cigarettes, and small inner-city branches of big-name super-markets which can offer heavy discounts. Pictured is Arthur Hemmens’ Shop, York, in 1909; and H.R. Hughes in Frome, 1907 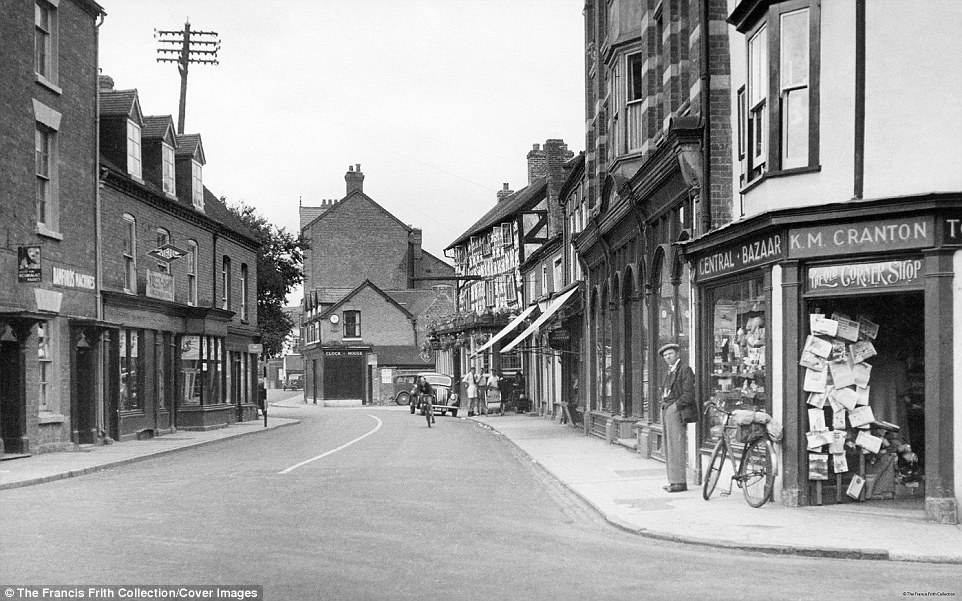 Competition and the retirement of the first generation of immigrants who often ran corner shops from the sixties onwards has seen the number of corner shops on the decline. Corner shop holders represent for many the model of the industrious independent capitalist, seeking to increase the wealth of his family through hard work and by pleasing their customers. Pictured is Market Street in Tenbury Wells circa 1950 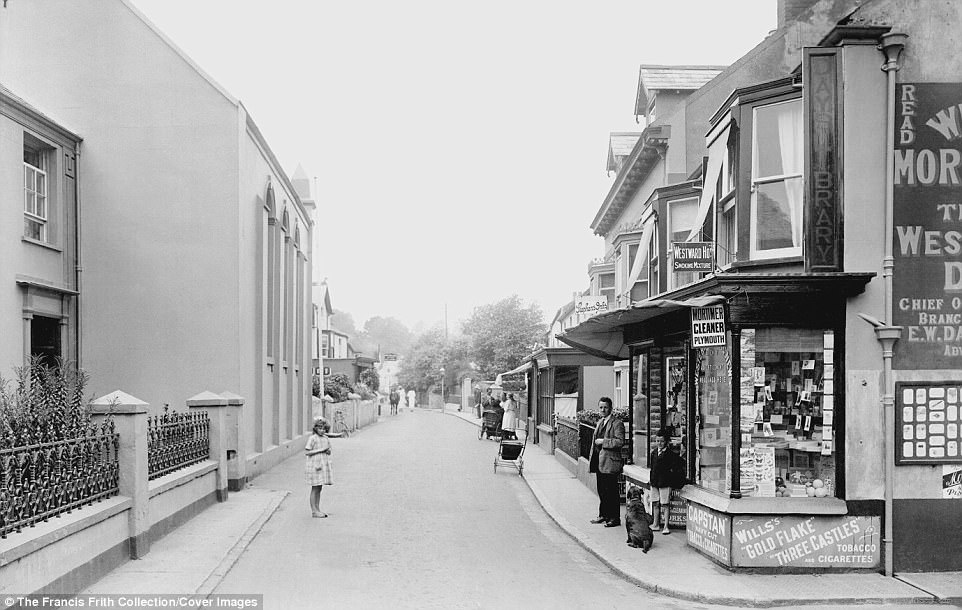 The last few decades have seen the big supermarkets moving into sites previously occupied by smaller stores. Sainsbury’s and Tesco between them already have around 3,000 convenience stores operating under their own brand names. Pictured: Fore Street, Shaldon, in 1922 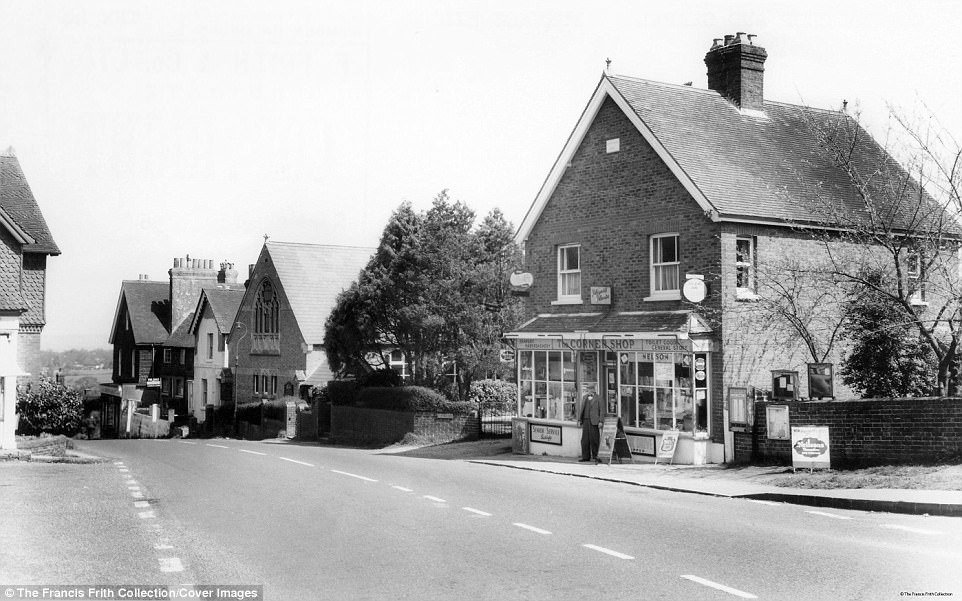 The rest of the market is still dominated by 18,841 ‘unaffiliated independents’ and corner shops. Pictured is the corner shop on North Street in Turners Hill circa 1965. In the distance is a chapel, which remains in the same location today 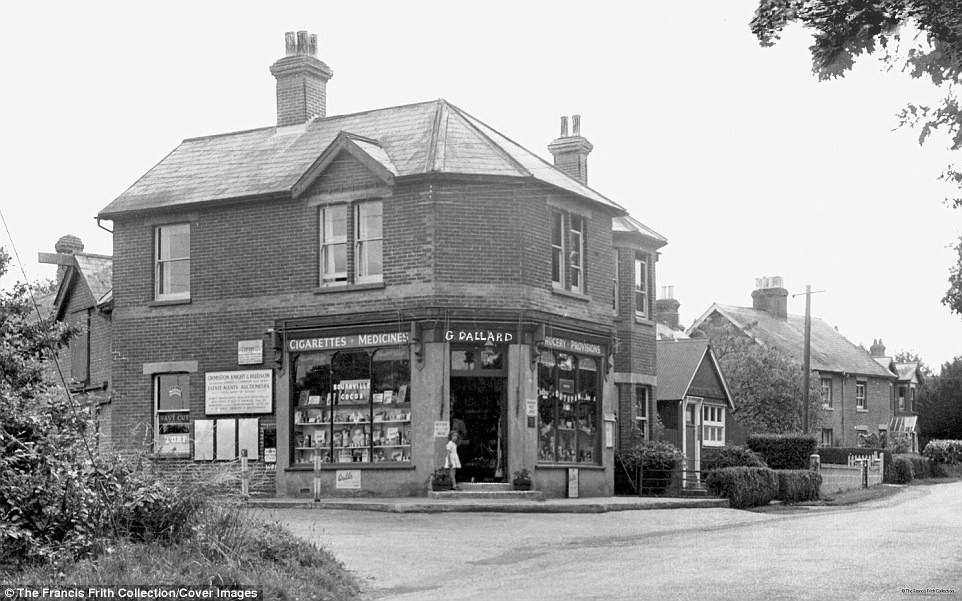 Despite the intrusion of supermarkets into small towns, convenience stores are still mostly run by independent shopkeepers or family run chains and supplied by buying or franchise groups such as Nisa and Spar. Pictured is the post office on Ringwood Road in Bransgore. There is still a post office near the site today, although it is now situated next door 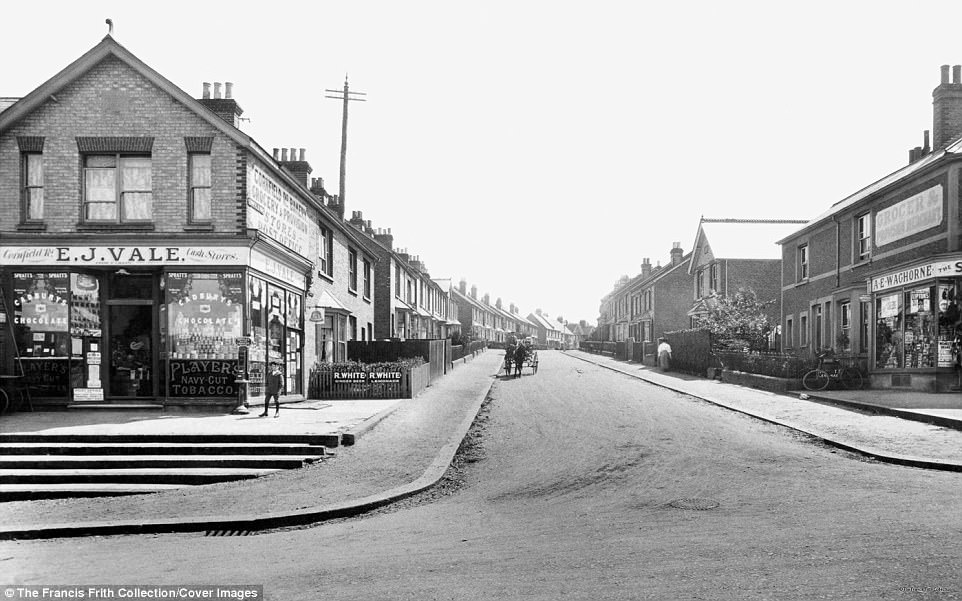 The magnificent archive of historical photographs that Mr Frith and the Frith company photographers created between 1860 and 1970 bears fascinating witness to the changes that took place in thousands of towns and villages throughout Britain for over a century. Pictured is Cornfield Road in Reigate, 1910 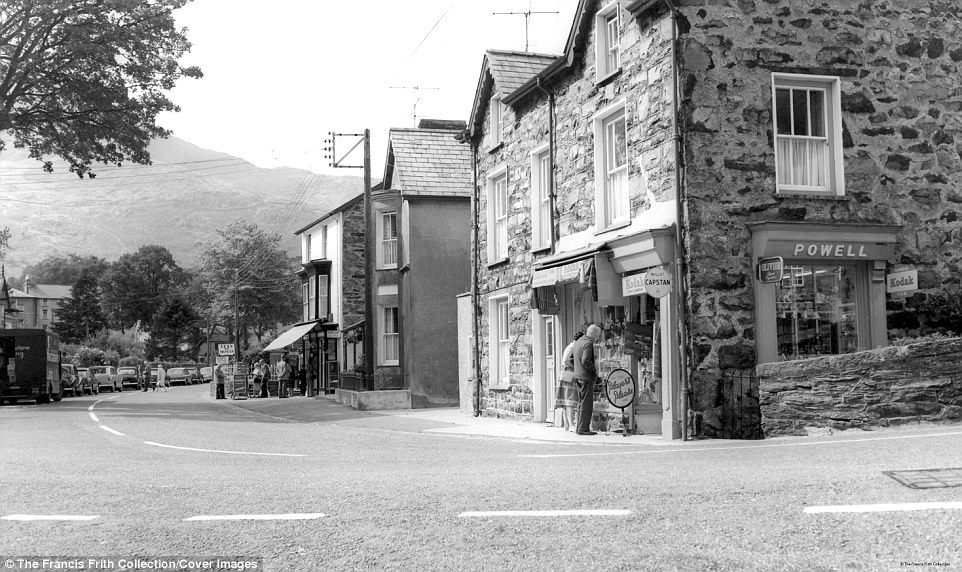 Many corner shops have struggled with competition from supermarkets, who are often able to undercut their prices. Pictured here is the local shop Beddgelert, Gwynedd circa 1960 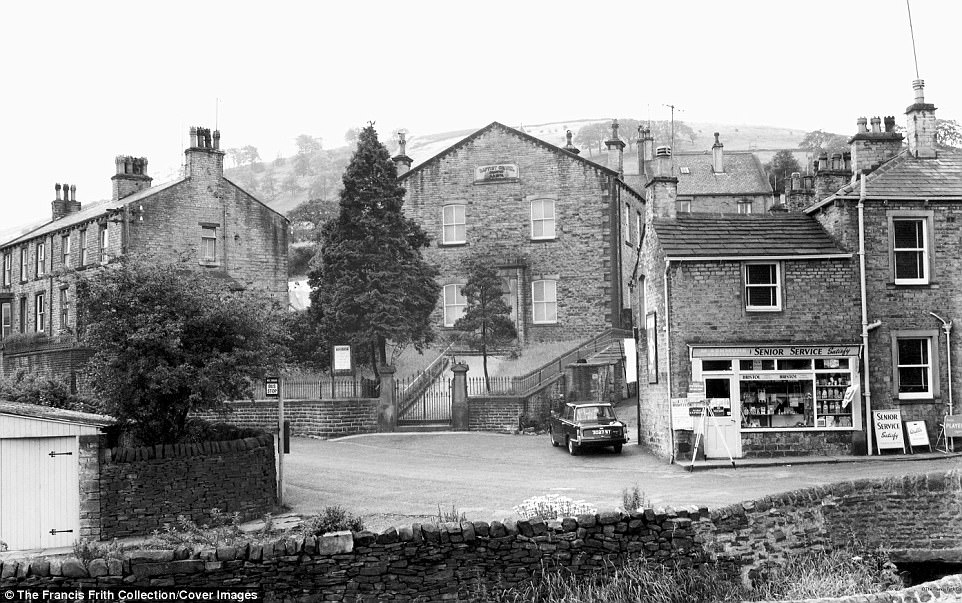 In the last few decades, the children of shopkeepers are seeking new opportunities and refusing to take over the family business, say researchers. Pictured is the local store in Cononley c.1960