Paleontologists in China have uncovered a fossilized skeleton of Sinomacrops bondei, a new species and genus that would have been covered in hair-like filaments and glided through primordial forests.

Classified as an anurognathid, it would have had round eyes and a short, stubby chin, drawing comparisons to the  adorable Porgs from Star Wars: The Last Jedi.

Unlike their distant relative, the pterodactyl, anurogathnids like the newly identified Sinomacrops bondei (pictured) were warm-blooded and had hair-like filaments called pycnofibers covering their head and torso

Pterosaurs are a widely diverse order of prehistoric flying reptiles and the earliest vertebrates known to have the ability to fly.

They existed during the Mesozoic Era, from 228 to 66 million years ago.

One of the rarer families of pterosaurs, anurognathids lived in Asia and Europe during the Jurassic and Cretaceous periods and were much smaller than their better-known cousins.

Rather than scales, their head and torso was covered in pycnofibers, filaments that are similar, but not related to mammalian fur. 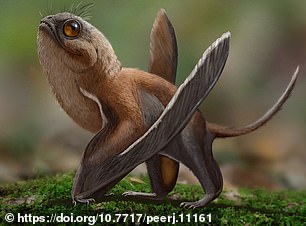 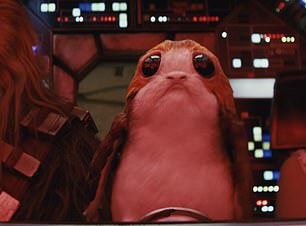 With its big eyes, round chin and hair-like filaments, Sinomacrops bondei (right) has been compared to the Porgs (left) from Star Wars: The Last Jedi

The specimen was discovered in Mutoudeng in China’s Hebei Province, a fruitful location for prehistoric fossils

Some paleontologists have suggested the filaments were proto-feathers, though others have disputed this theory.

It’s believed that, unlike modern-day reptiles, anurognathids were warm-blooded.

Until now only a half-dozen species have been identified from 12 specimens  recovered in Central Europe and Asia.

But in a paper recently published in the journal Paleontology and Evolutionary Science, an international team of researchers reported on a new genus and species of anurognathids unearthed in Mutoudeng in China’s Hebei province. 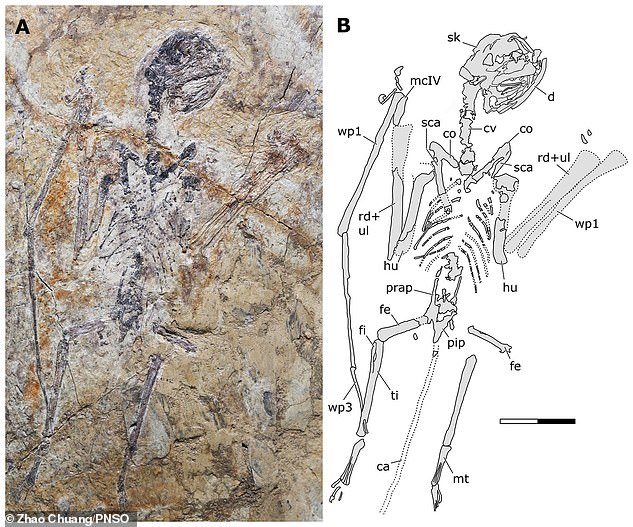 Sinomacrops bondei is the first anurognathid found with its full skull exposed in lateral view, though much of its skeleton was crushed 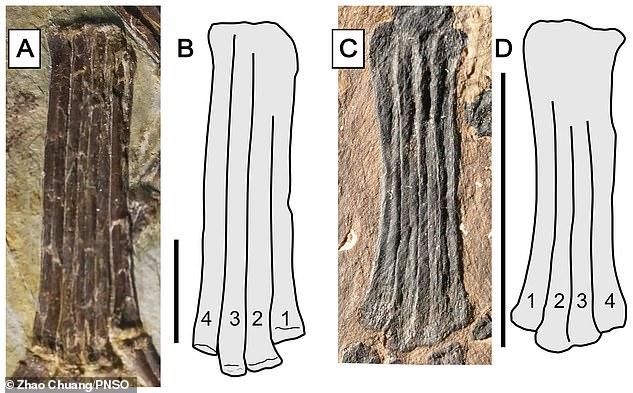 Photos and schematic drawings of S. Bondei’s metatarsal. S. Bondei was quite small, with a full wingspan of just 36 inches.

The creature’s scientific name, Sinomacrops bondei, is taken from the Greek word for China, ‘Sino,’ combined with the words for large, ‘macro,’ and eyes, ‘ops.’

The researchers chose ‘Bondei’ to honor paleontologist Niels Bonde, ‘for his many scientific contributions and being an inspiration for us.’

They dated the furry flyer from the Middle-Late Jurassic, about 160 million years ago.

It’s the first anurognathid found with its full skull exposed in lateral view.

Though the skeleton was badly crushed, there were patches of soft tissue and researchers were also able to glean insights about the shape of the jaw, according to Everything Dinosaur.

That helped them place it in the evolutionary tree.

They labeled it as related to but distinct from the pterosaur group Batrachognathus volans, first studied in 1948.

According to their report, S. Bondei was quite small, with a full wingspan of just 36 inches.

They had short skulls with huge eye sockets, peg-like teeth and thick, rounded jaws that were wider than they were long.

They likely lived in forest environments and would have been ace gliders, able to snatch their favorite meal—insects—out of mid-air. 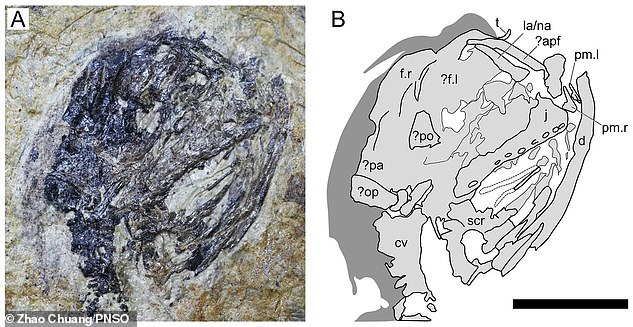 S. bondei is the first anurognathid found with its full skull exposed in lateral view (left). It had huge eye sockets, peg-like teeth and a thick, rounded jaw

This rare find demonstrates there greater morphological diversity even within anurognathids than paleontologists presumed, the authors wrote.

‘Some previous interpretations of anurognathid morphology and systematics have relied on limited available information,’ they said.

‘With time and new specimens being discovered, new data have been provided and new interpretations were presented. For this reason, each new specimen is crucial for the understanding of the group.’

The published rendering of S. bondei, by noted paleoartist Zhao Chuang, garnered much attention online, including from Natalia Jagielska, a PhD candidate in paleontology and a peer reviewer on the new study.

On Twitter, Jagielska, a science illustrator herself, joked that S. bondei was the ‘same species’ as the Porg, the chubby seabirds that appeared in 2017’s Star Wars: The Last Jedi.

The Yanliao Biota excavation area, where S. bondei was uncovered, is well-known for both the number of fossils it has yielded and their exceptional quality. 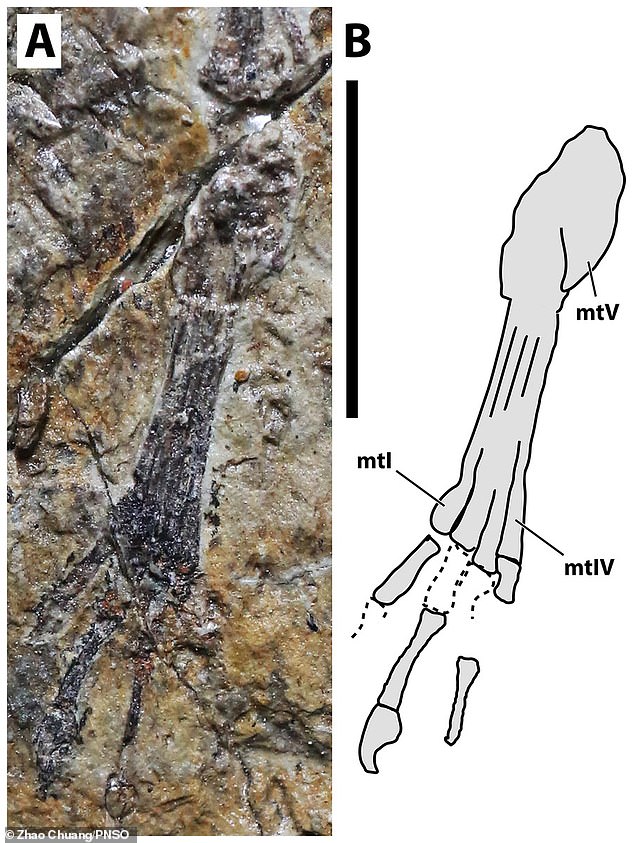 The creature’s scientific name, Sinomacrops bondei, is taken from the Greek word for China, ‘Sino,’ combined with the terms for large, ‘macro,’ and eyes, ‘ops.’

Whole skeletons, complete with skin, fur, and even stomach contents have been excavated from the site.

Organisms were quickly buried under layers of volcanic ash, creating an airless environment that helped with preservation.

The remains of S. bondei are being housed in the Jinzhou Museum of Paleontology in west-central China.