Captivating vintage photos tell the story of Greenwich Village, the New York district that became a creative haven for artists, poets, writers and musicians in the middle of the 20th century.

The images, unearthed in the TopFoto photographic archive in Kent, England, had been in storage for several decades before their recent discovery.

Bob Dylan, Jack Kerouac and Maya Angelou would visit the New York neighborhood, which was also the birthplace of the Beat Generation and radical counterculture.

The Gaslight Café (seen above in undated pictured) was a coffeehouse in the Greenwich Village. It opened in 1958 and it soon became famous as a venue for folk music and other musical acts. It later closed in 1971. It also served as a place to socialize as emerging stars such as Jimi Hendrix and Bruce Springsteen worked or met there 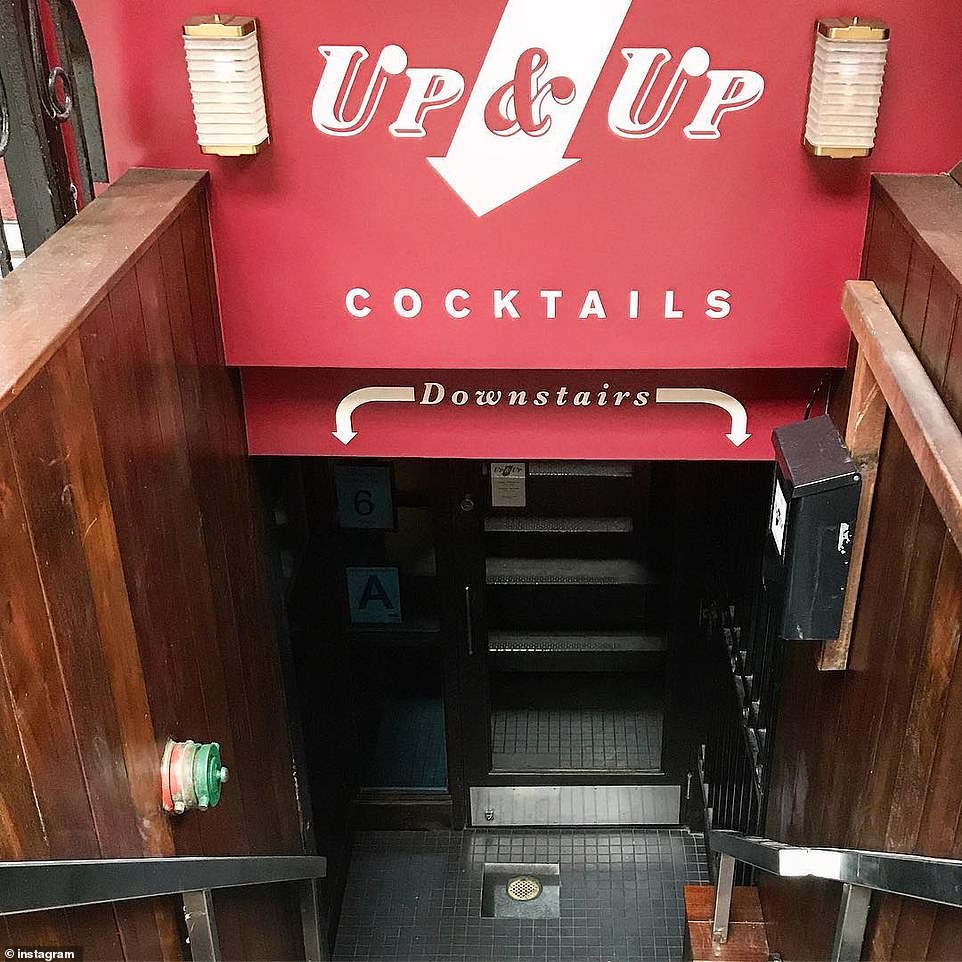 The pictures, taken in April 1960, include a beautiful woman, dressed all in black during a live jazz performance.

She sits at a table with a man, who cannot be seen clearly, with two bottles of beer in front of them, as the jazz band plays in the background.

The images also feature the staircase leading down to the Gaslight Café, where emerging stars such as Jimi Hendrix and Bruce Springsteen played.

The coffeehouse first opened in 1958 and it soon became famous as a venue for folk music and other musical acts. It closed in 1971. 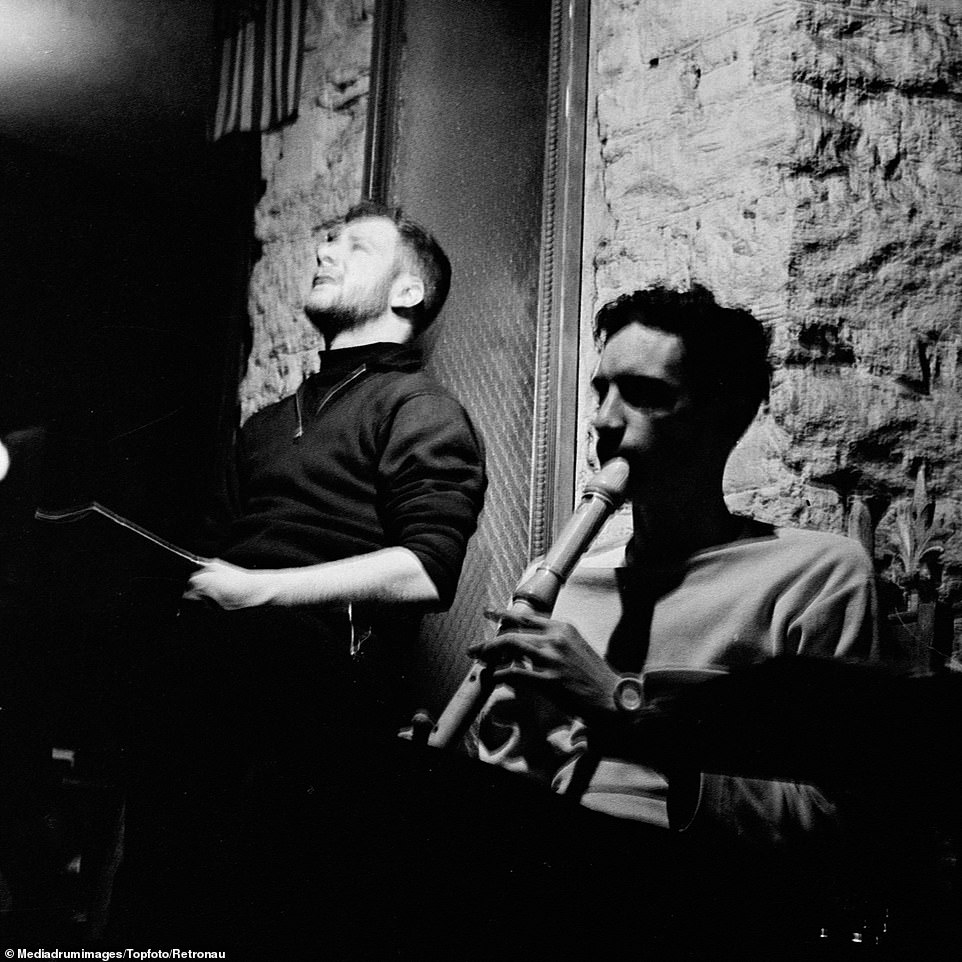 The Village was home to many late-night jazz-heavy basement bars and sculpted some of the most famous talents of the era. The Beat Generation movement, whose birthplace was Greenwich, rejected conventional society, but valued free self-expression and favored modern jazz as a musical form. Unnamed artists are seen above in the Village in this undated photo 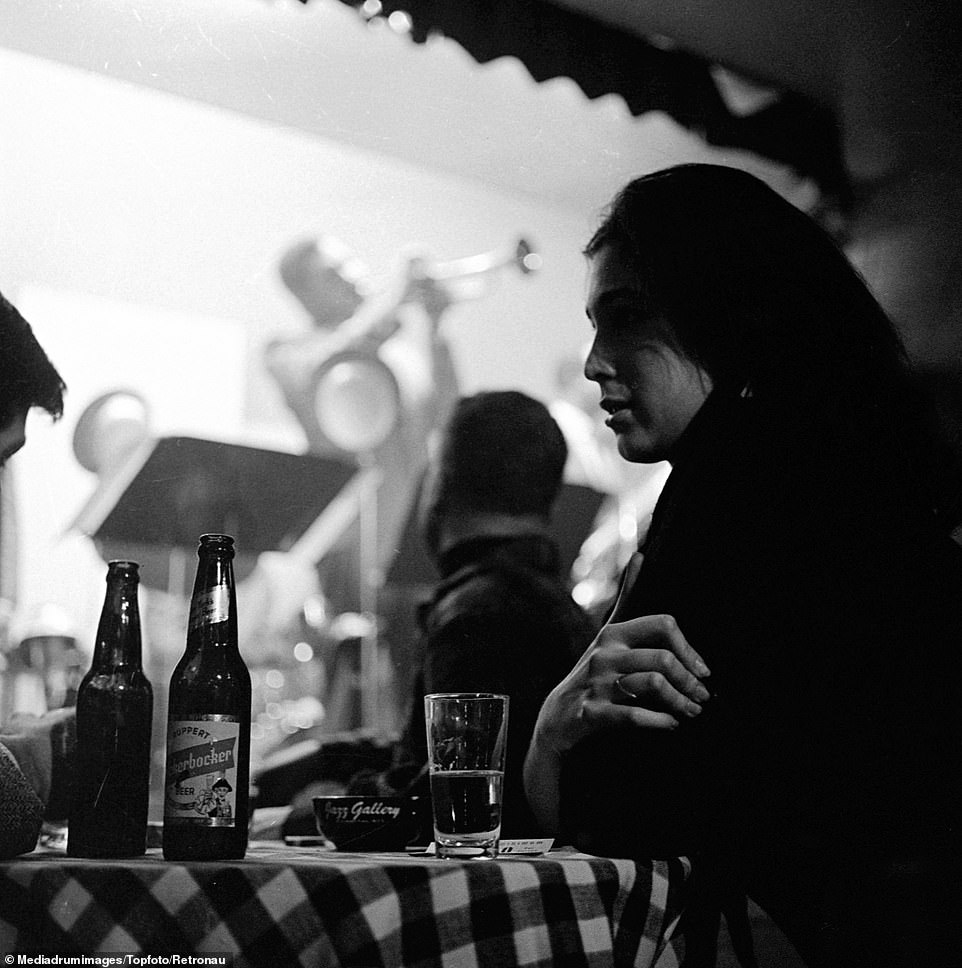 One of the photo shows a woman during a jazz performance as she sits at a table with a man who cannot be seen clearly. In front of them, there are two beer bottles and a glass, as musicians play in the background. The captivating vintage photos have been discovered after several decades in storage in the TopFoto photographic archive in Kent, England 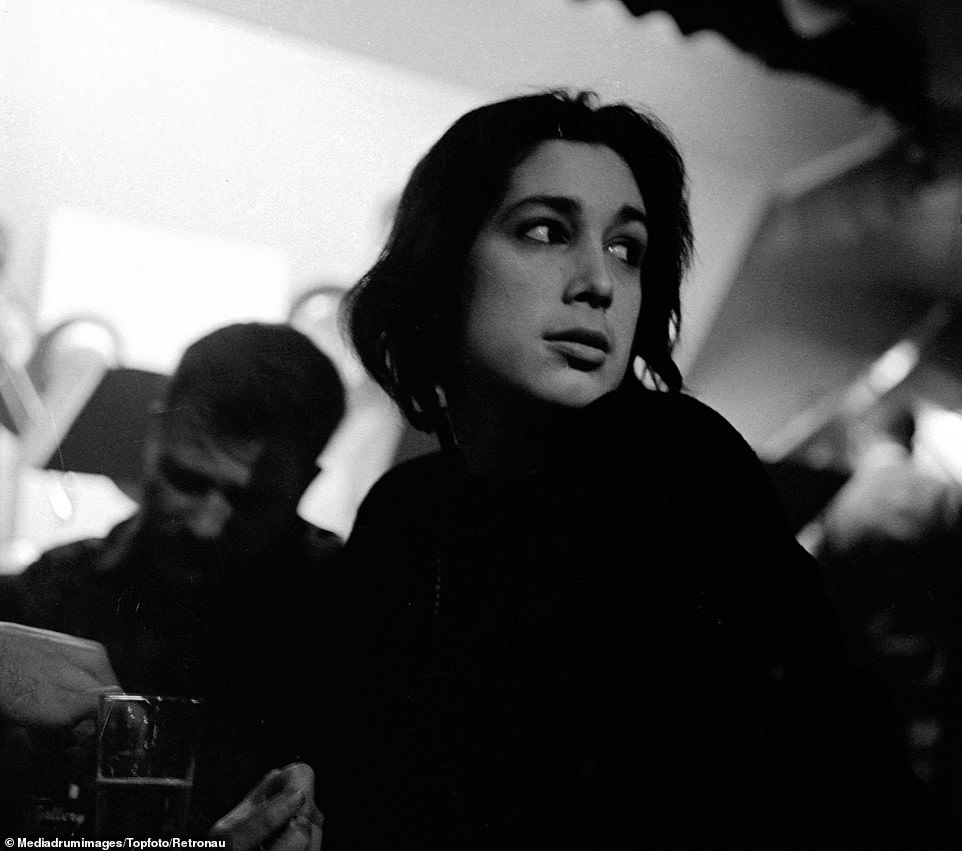 A beautiful woman dressed all in black is pictured during a music performance at The Gaslight Café, as she looks to her left while sitting at a table with a glass in front of her

Greenwich Village was filled with many basement bars as well as coffee houses, popular among some of the most famous talents of the era.

The black and white images also show Cafe Bizarre, where the rock band The Velvet Underground performed alongside some of the finest literary minds of the era.

Rick Allmen opened the cafe at 106 West 3rd Street in 1957, and it reportedly became a favorite haunt of artist Andy Warhol. 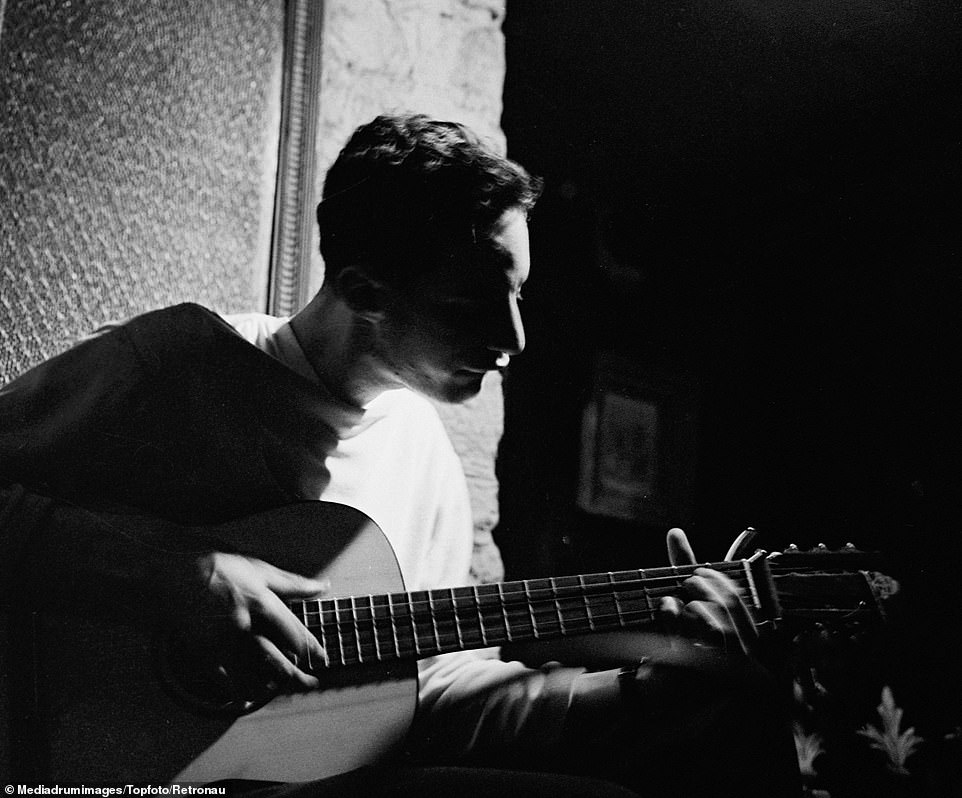 A guitarist, pictured, plays in Greenwich Village, where music and poetry were among the core cultural elements. Performers including Bob Dylan, Nina Simone and Jimi Hendrix all played there

Huge audiences often attended live performances by musicians and were encouraged to snap their fingers instead of applaud to prevent noise complaints from neighbors.

In the late 1940s, the counterculture known as the ‘Beat Generation’ emerged.

Its adherents, who called themselves ‘beats’, were generally apolitical and indifferent to social problems. 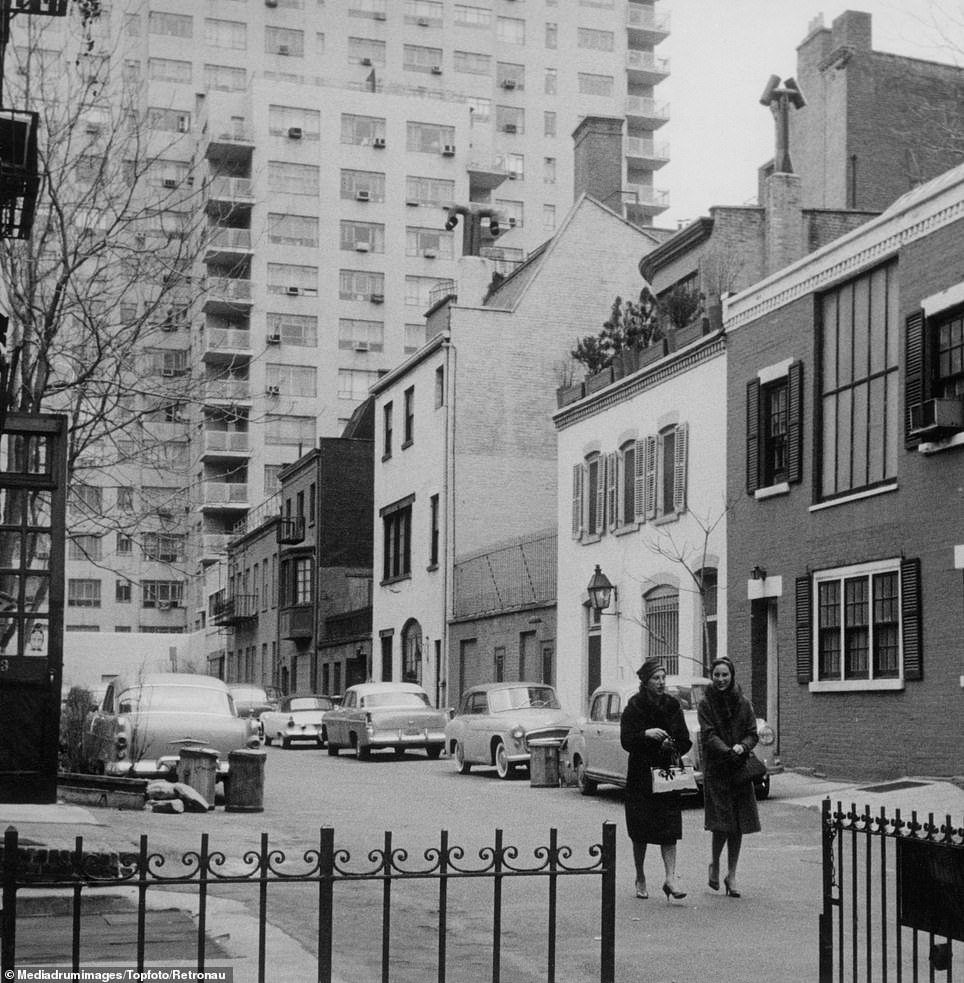 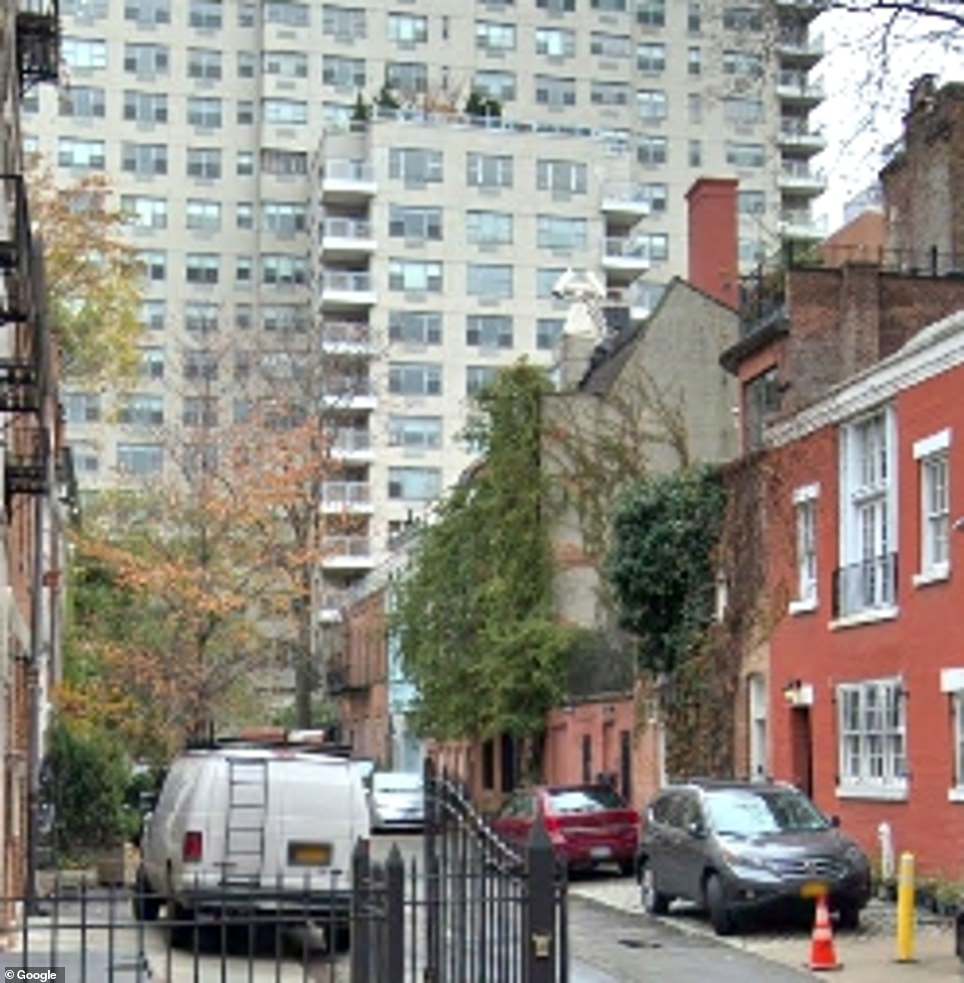 MacDougal Alley in Greenwich Village (pictured) was originally a private lane made up of 19th century stables belonging to adjacent townhouses. When cars became popular in the early 20th century, most of the stables became studio workshops

They saw taboos against frank discussions about sexuality as unhealthy and possibly damaging to the spirit.

The Beat Generation rejected the idea of a conventional society, valuing free self-expression above all else.

The movement converged around the writings of Allen Ginsberg, Jack Kerouac and William Burroughs – embracing nonconformity and a bohemian, sexually-liberal lifestyle.

It laid the philosophical foundations for a free-spirited expressionism that would become the broader hippie movement in the 1960s. 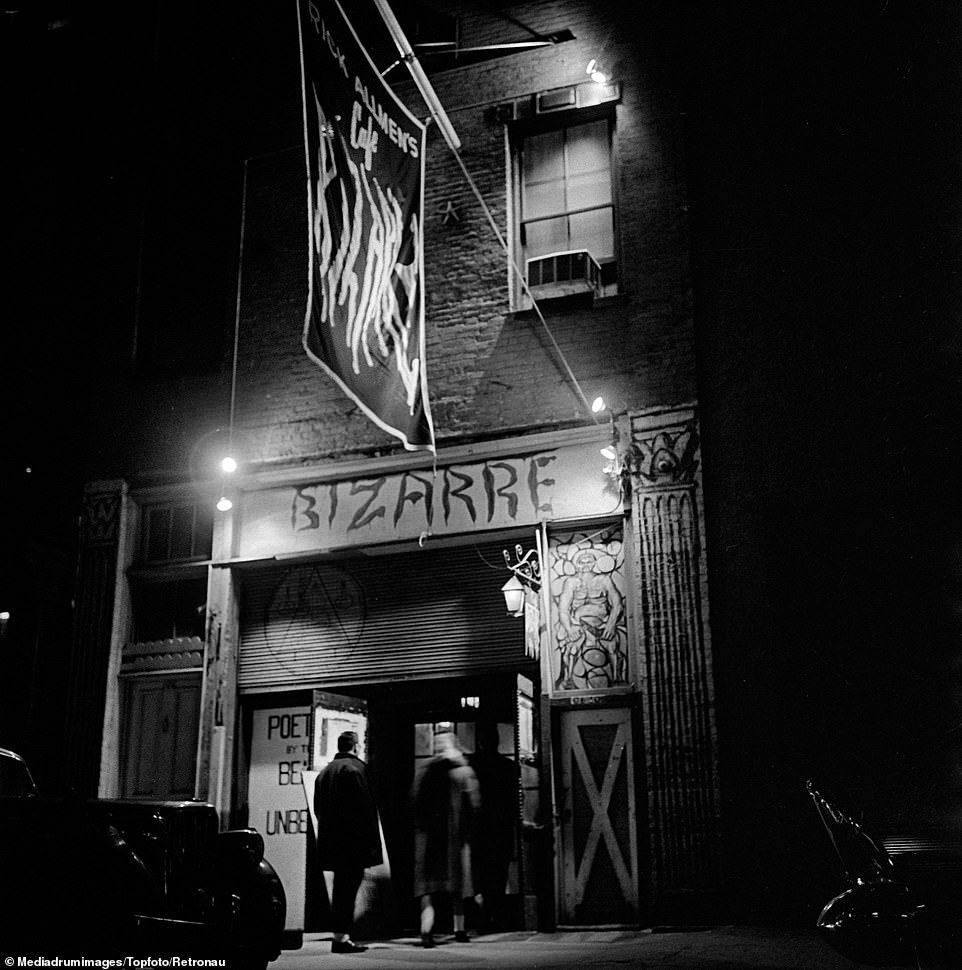 Cafe Bizarre, pictured, at 106 West 3rd Street often hosted the band The Velvet Underground as they played alongside some of the finest literary minds 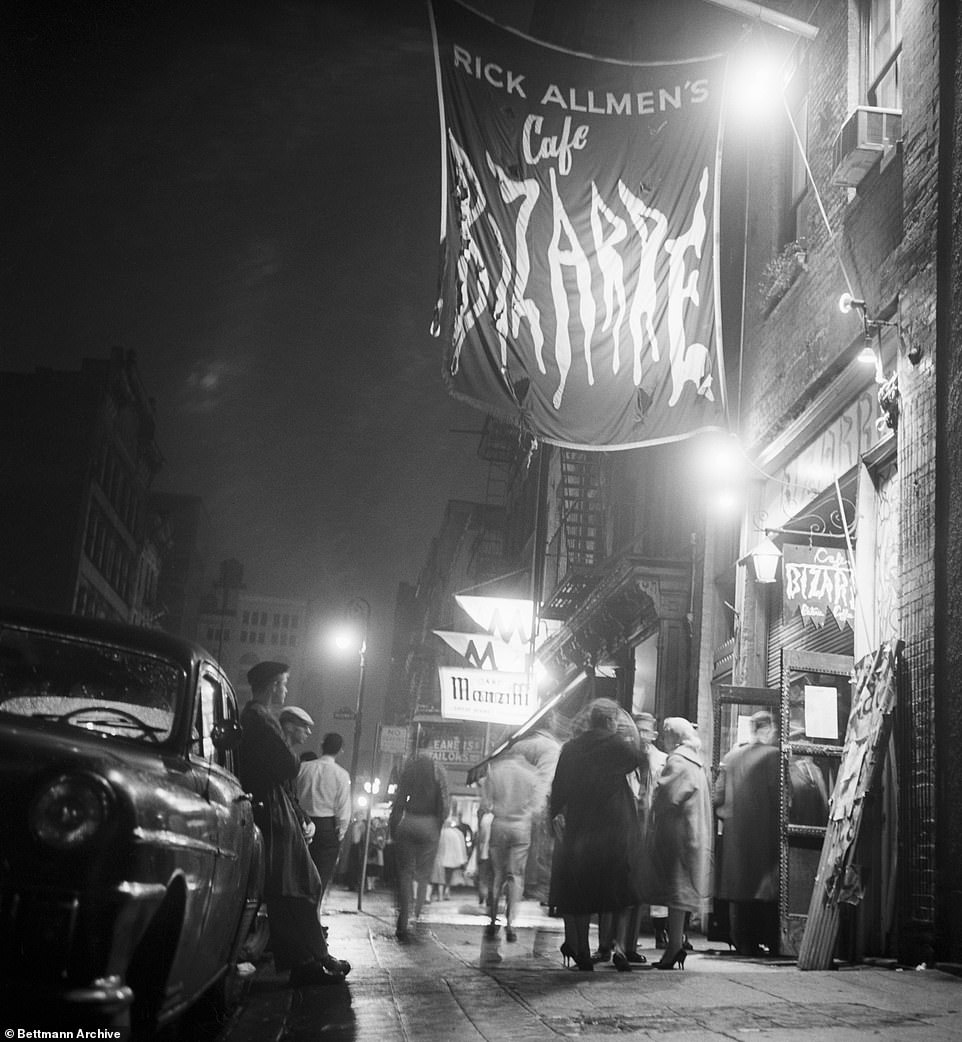 Rick Allmen opened it in 1957. Andy Warhol discovered the rock band there. The cafe was one of the leading places for New York artists to hang out, share music and poetry and generally be themselves 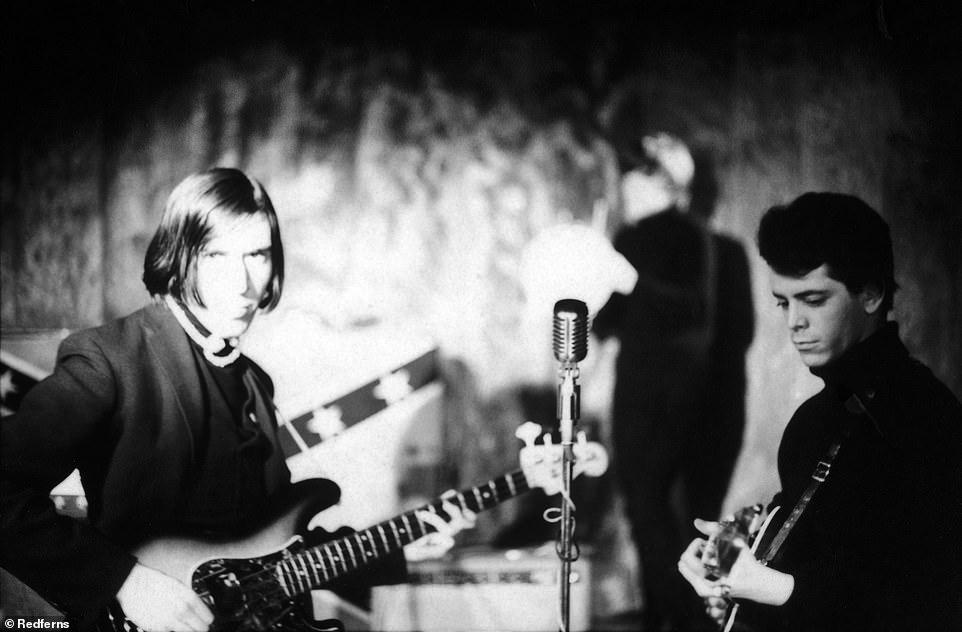 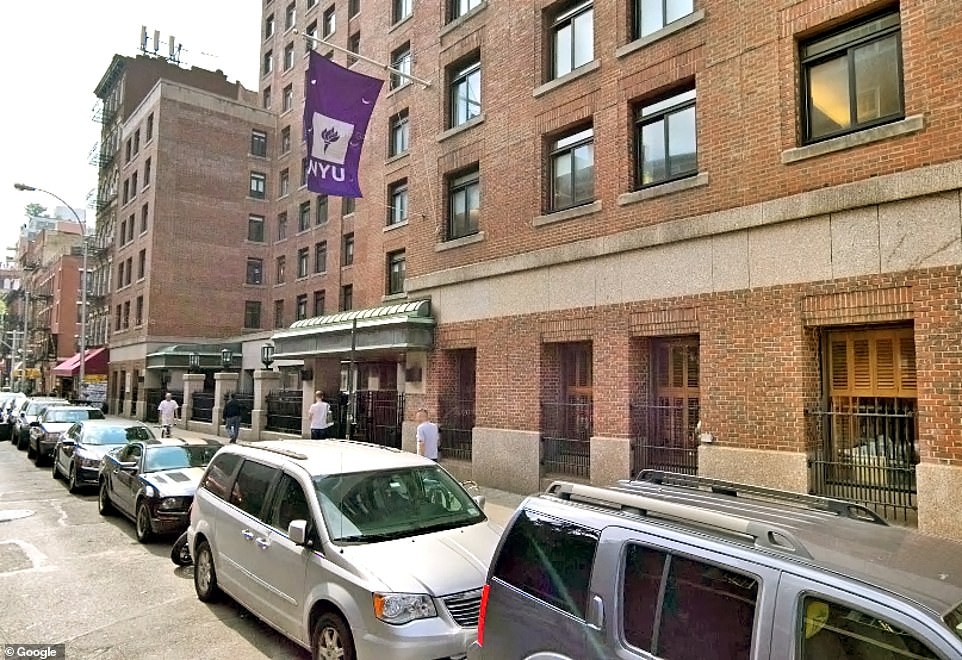 The image above of the building at 106 West 3rd Street shows where Cafe Bizarre used to be. The building is now a dormitory operated by the New York University School of Law

One of the photos also shows MacDougal Alley in Greenwich Village, which was originally a private lane made up of 19th century stables belonging to adjacent townhouses.

When cars became popular in the early 20th century, most of the stables in the street became studio workshops for artists, including sculptor Gertrude Vanderbilt Whitney. 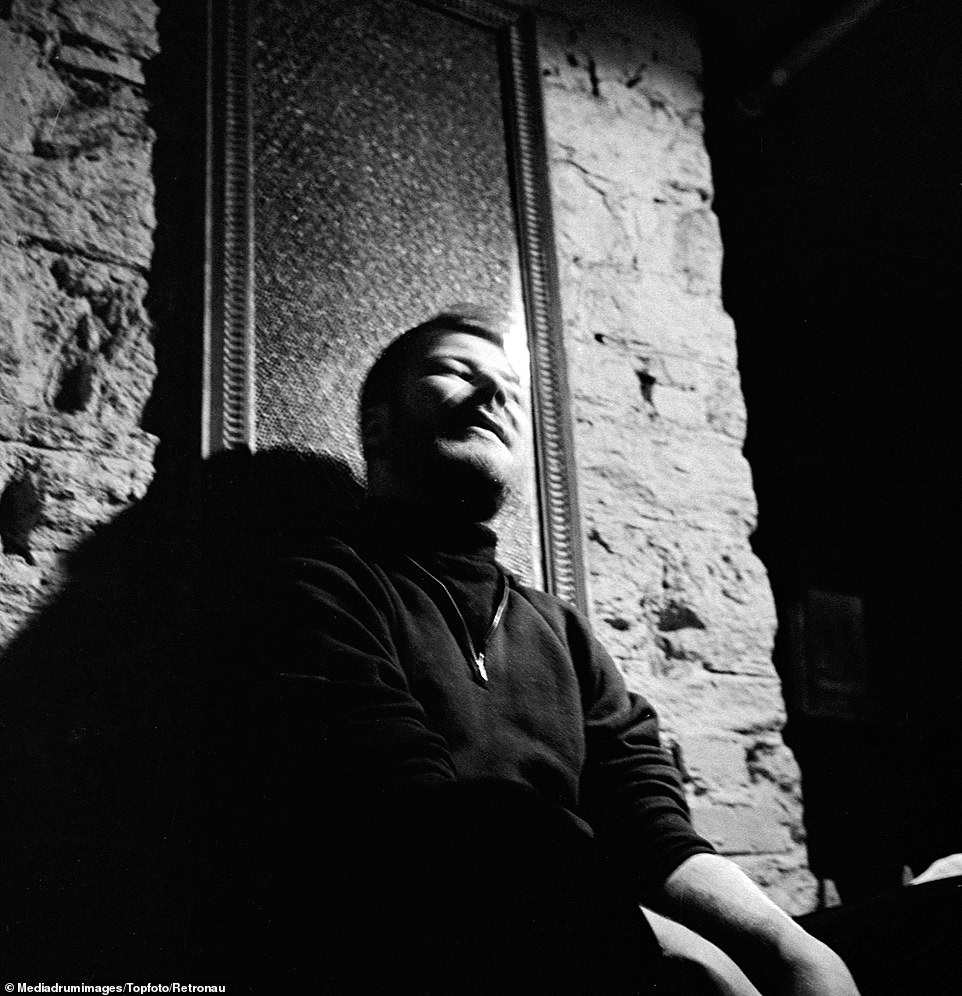 An atmospheric black and white shot captures a man during a wild night in Greenwich Village. In the late 1940s, a new counterculture known as the ‘Beat Generation’ emerged in the neighborhood 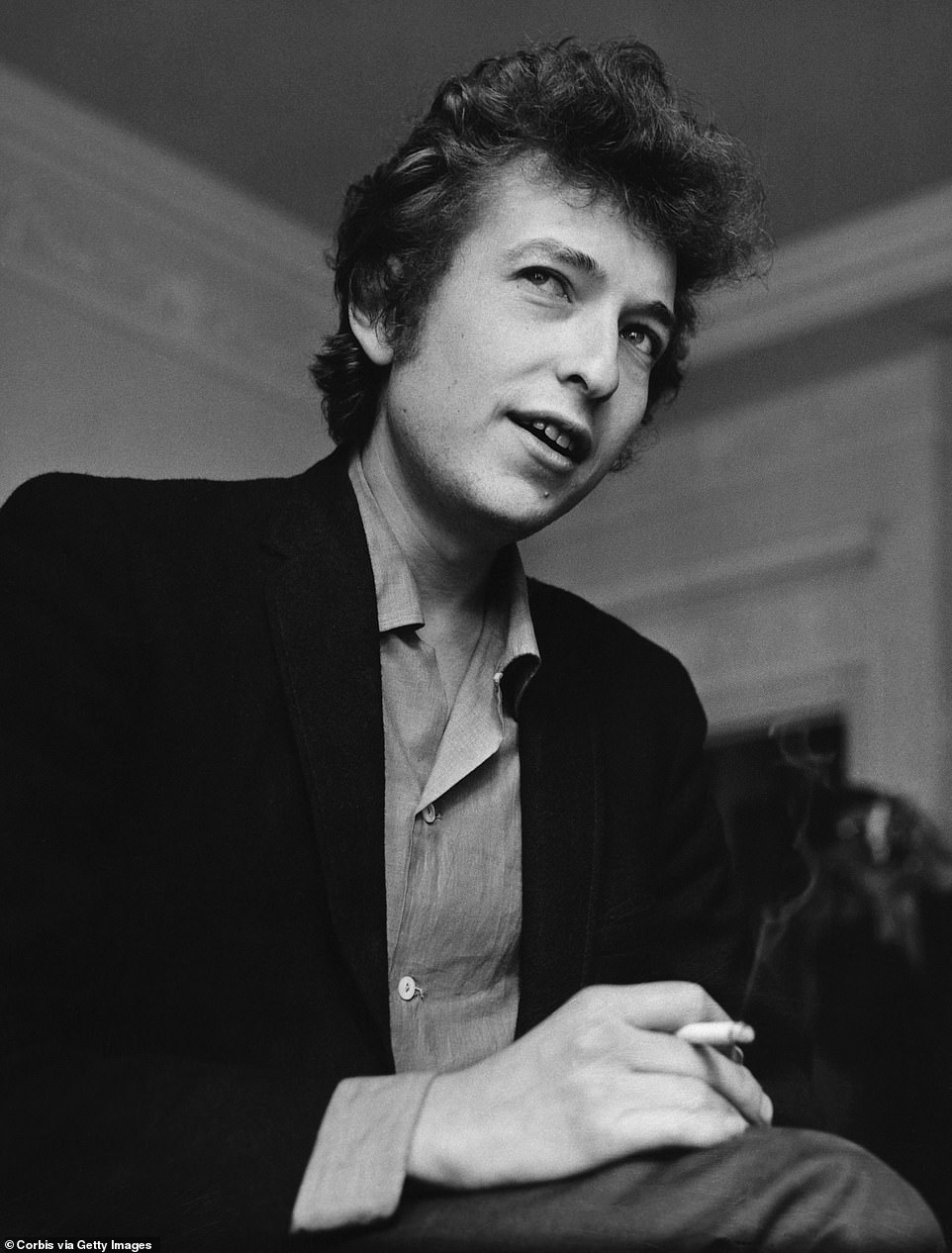 Bob Dylan was a frequent visitor to Greenwich Village venues. He is seen above in this undated file photo

Today, most of the buildings in the street there are used as private residences.

Welsh writer Dylan Thomas died after a heavy drinking session in Greenwich Village at the White Horse Tavern in 1953. Decades later the district would be the birthplace of the protests against the Vietnam War and the Stonewall Riots.