An Indian newly-wed received a text from his wife while she was on board the doomed Ethiopian Airlines jet – but she was dead before he was able to reply, it has emerged.

Shikha Garg, who was travelling to a UN meeting in Nairobi, had married Soumya Bhattacharya less than three months ago after dating him for three years.

Bhattacharya was also supposed to fly with her to Nairobi but a last-minute change in plans meant he stayed back in New Delhi, the Times of India reported.

‘I have boarded the flight and will call you once I land,’ Garg texted.

But before the husband could type a reply, his phone buzzed and a caller informed him about the plane crash, the newspaper said.

Bhattacharya had also bought a flight ticket for Nairobi but cancelled it because of an urgent meeting.

The couple, who lived in New Delhi, had instead planned a vacation after Garg’s return from Nairobi, where she was due to attend the annual assembly of the UN Environment Programme.

On Monday Indian Foreign Minister Sushma Swaraj said she was unable to get in touch with Garg’s family and appealed for help on Twitter.

Later she said she had managed to speak to Garg’s bereaved family members as well as those of other three Indians who died in the crash. 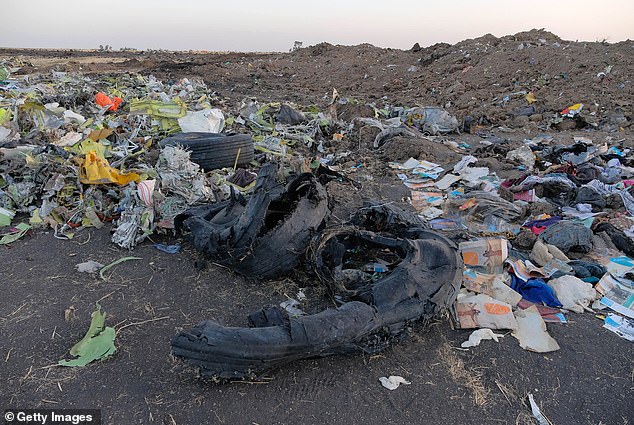 Pressure is mounting on Boeing after more airlines and countries grounded their fleets of 737 Max 8 jets in the wake of the Ethiopian Airlines disaster. Pictured: Emergency crews at the scene of the crash last night 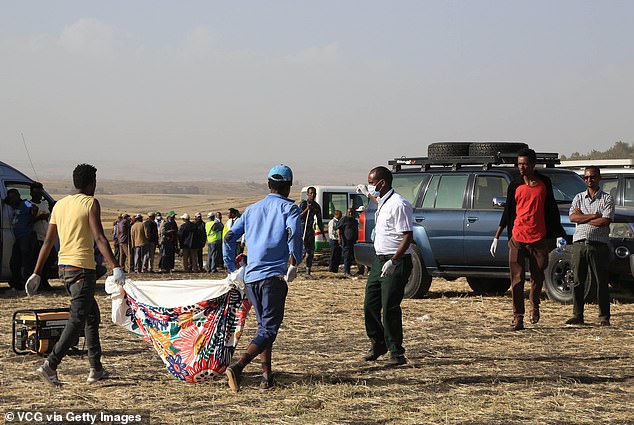 Flight ET302 was seen ‘swerving and dipping’ before crashing down minutes from take off from Addis Ababa on Sunday morning, killing all 157 on board including nine Britons

Garg was a consultant with the Indian environment ministry and had taken part in the negotiations leading to the 2015 Paris climate accord.

People holding passports from 35 countries were on board including some two dozen UN staff.

The aircraft was the same type as the Indonesian Lion Air plane that crashed in October, killing 189 passengers and crew.

The latest crash has prompted airlines across the world to begin withdrawing the model from schedules.

Indian regulators Monday ordered additional maintenance checks on Boeing 737 MAX 8 planes but ruled out any immediate grounding of the fleet.

India’s Spicejet and Jet Airways together operate 17 of the planes.

Jet, which has had to ground parts of its fleet in recent weeks due to its financial woes, said none of its Boeing 737 MAX aircraft was operational at present. 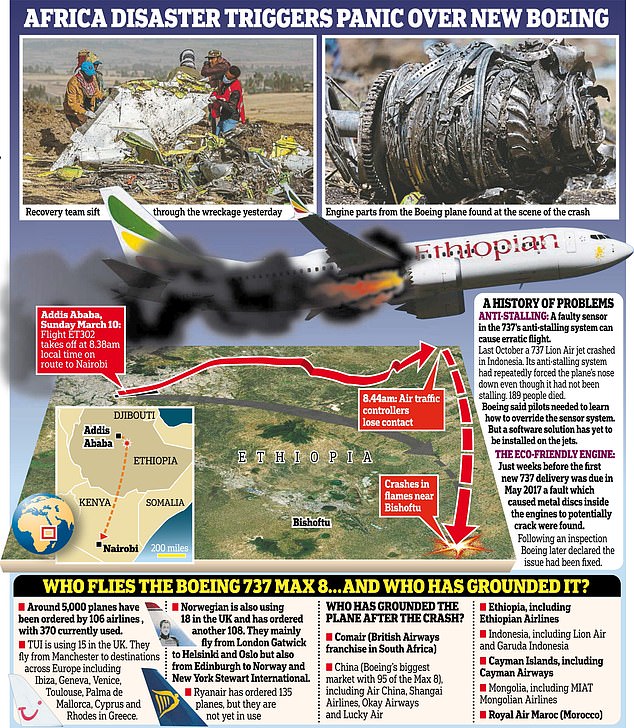