Newlyweds get soaked by huge wave during beach photoshoot

It’s a nice day for a wet wedding! Couple gets soaked by huge wave during beach photoshoot

This is the hilarious moment a couple are wiped out by a huge wave during their wedding photoshoot.

The two women pose in their wedding dresses for the camera as a wave rolls closer to them.

It appears to crash into the side of the rock until it continues its path soaking the newlyweds.

The photographer manages to quickly their cameras out on the way last minute.

He then raises both cameras victoriously to celebrate them not getting drenched by the salty water.

One onlooker suspected it would happen as they were both so close to the edge. 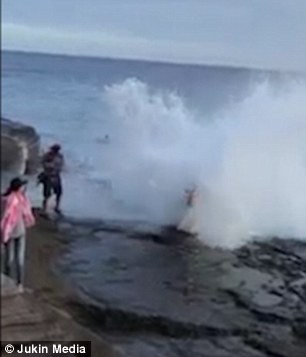 While filming their special moment, a caught it on camera and yells out: ‘Boom! I knew that was going to happen!

‘I got it on camera cause it happened to me. All on camera.

The couple seemed pleased by those could not stop laughing after the incident.

They both fixed their hair as one held up her damp dress and climbed back up the rocks.