Newmarch House: Inside ‘hellish’ nursing home where 56 people have coronavirus

The daughter of an elderly nursing home resident who is one of 56 patients and staff to test positive to COVID-19 has detailed how her ill mother is ‘living in hell’ at Newmarch House.

The care home, in Sydney’s west, reported an extraordinary five deaths to the deadly disease in just 24 hours this week and has suffered 11 in total, after a staff member with mild symptoms infected the facility for six daysearlier this month.

Distraught family member Mary Watson told how her mother, Alice Bacon, 93, is subsisting on frozen cheese sandwiches, has watched her weight drop to just 47kg and is ‘mentally anguished’ thanks to strict isolation rules.

Ms Watson said residents were ‘dropping like flies’ and is terrified her mother will become yet another grim statistic.

‘My concern is, she told my son this morning she’d rather die, because she’s living in hell,’ she told reporters on Wednesday.

‘And if she’s gone, she won’t be in hell anymore.’

Through the looking glass: Mary Watson (black top) and loved ones speak to 93-year-old mother Alice Bacon through the window at Newmarch House, in Sydney’s west, on her birthday weeks ago. Residents are ‘dropping like flies’, Ms Watson said 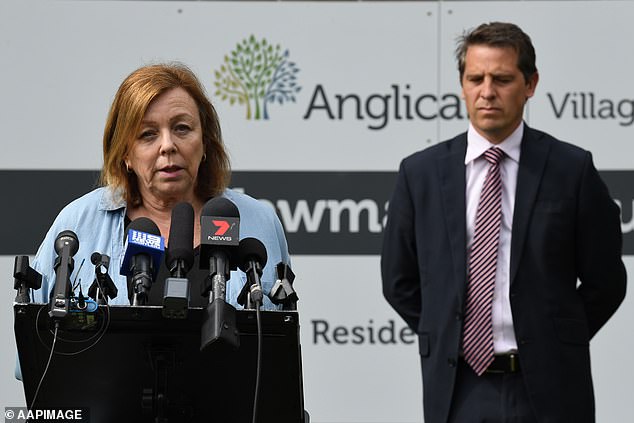 ‘My concern is, she told my son this morning she’d rather die, because she’s living in hell,’ Ms Watson (above) said on Wednesday. ‘And if she’s gone, she won’t be in hell anymore’ 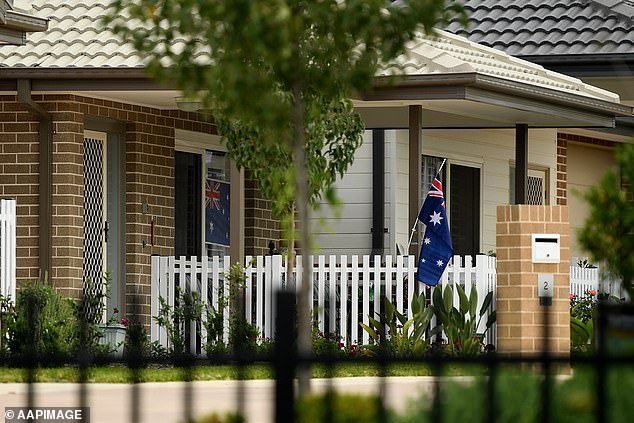 From the outside: 56 people at Newmarch House near Caddens in the city’s west have tested positive to the coronavirus, after a staff member showed up to work with mild symptoms

Ms Watson said she is yet to speak to a doctor about how the deadly virus is attacking her mother.

Recently, she’s been unable to see her mum even through a window, claiming the centre operator had told families rallying outside it was ‘not feasible’.

Ms Watson said: ‘My mum tells me she has had a frozen cheese sandwich for lunch. I’m mortified.

‘She’s 47kg. She’s doing her laundry in the bathroom sink because there’s no laundry service.

‘I’m worried she’s going to slip on the floor and go away with a head injury. Those little services, someone should have thought about this’.

The operator of the aged care home said the facility is running as a ‘pseudo hospital’ to manage the outbreak, and is expecting more people to die.

Anglicare chief executive Grant Millard said the facility had been warned to expect difficult days ahead.

‘To see them dying so quickly in these circumstances despite best medical care and attention that’s being given to them, it’s still a situation of significant and deep trauma,’ Mr Millard told ABC News.

‘We do anticipate more deaths.’

Mr Millard said there are 81 residents still living at the Caddens facility.

Some 20 registered nurses, 25 carers, 11 cleaners and a GP are working daily at the nursing home where 34 residents and 22 staff members have tested positive to COVID-19. 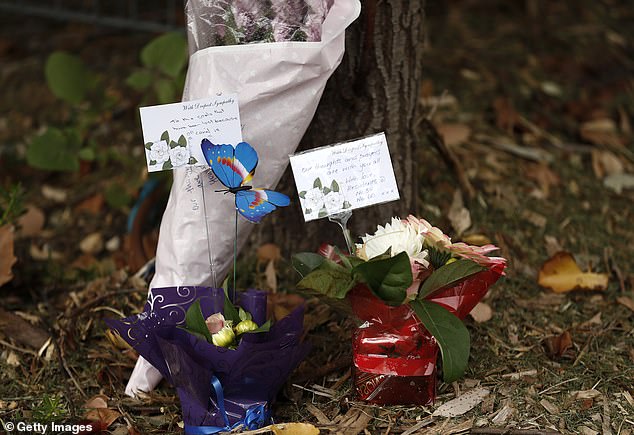 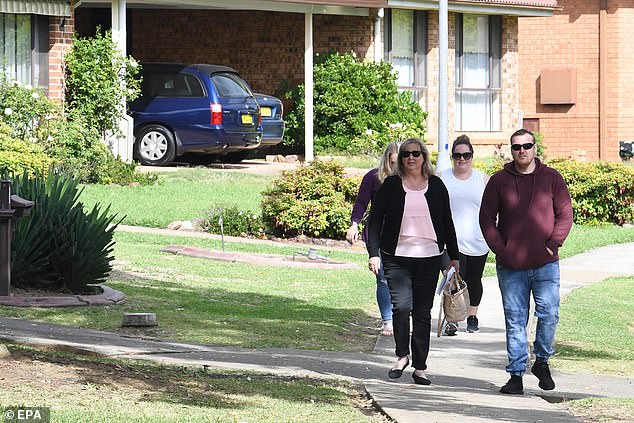 ‘(It’s) really running as a pseudo of a hospital at the moment,’ Mr Millard said.

Residents have been isolating in their homes since the outbreak on April 11 with Anglicare working to connect them with family members via mobile phones.

Other employees have been tasked with helping residents who cannot use mobile phones to connect with their family with Mr Millard saying it’s ‘sincerely regrettable’ those calls have not been happening frequently enough.

‘You need to appreciate that some people you are bringing in for these services are not clinicians, they’re not used to wearing personal protective equipment,’ he told ABC News.

‘It’s a very dangerous place for people to be working.’

The facility is looking into window therapy in which residents can communicate with family members and receive therapy through a window.

Political pressure has been heaped on NSW Premier Gladys Berejiklian, with Ms Watson and other relatives of those inside joining Labor leader Jodi McKay’s press conference outside the nursing home.

Ms Berejiklian said that it was ‘distressing’ communication between family members of Newmarch House residents and operators Anglicare was lax. 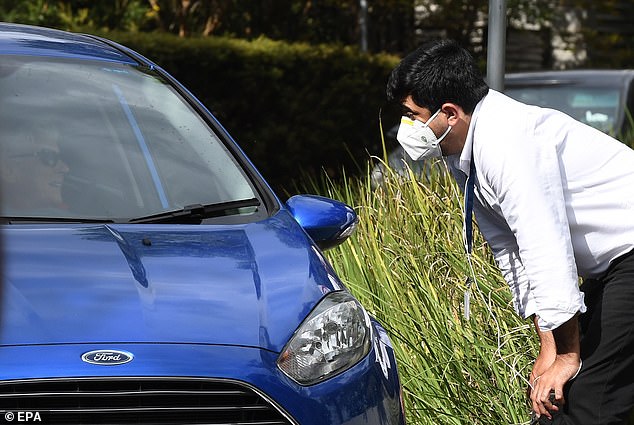 The nursing home at the base of Sydney’s Blue Mountains has become a ‘pseudo hospital’, operator Anglicare has admitted. Above, a masked security guard at the complex 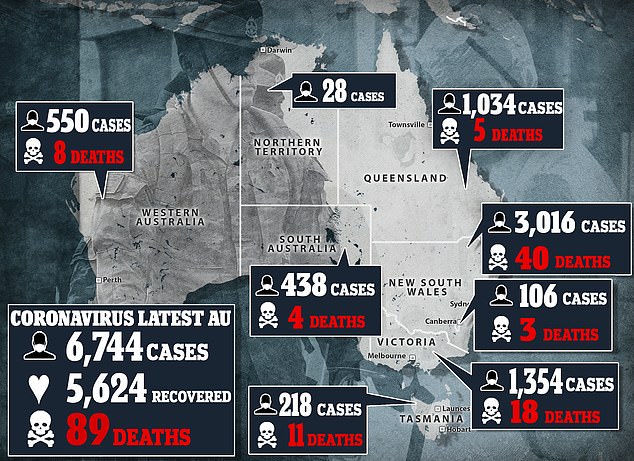 Coronavirus across Australia: The total case number and death toll across the country as of Wednesday, April 29

The premier said the lack of communication was a ‘huge issue’ given the fear and distress felt by family members and residents of the home.

‘We say to the operators of that aged care home, you need to lift your game in communicating to loved ones,’ Ms Berejiklian said.

‘It’s not acceptable to keep people in the dark. Just put yourself in the shoes of those people – it’s horrific to be fearful about firstly, potentially losing a loved one, but then not knowing what’s going on and not being able to offer that care.’

Infectious disease clinicians are assessing the situation at the facility daily, while staff who helped manage a coronavirus outbreak at Dorothy Henderson Lodge aged care home in Macquarie Park have also been called in to help.

NSW chief health officer Dr Kerry Chant said a report on the Newmarch House outbreak will be prepared and shared with families before its findings are made public.

For crisis support, call Lifeline on 13 11 14. For information on the coronavirus disease (COVID-19), call the Australian Government’s National Coronavirus Helpline on 1800 020 080