Residents in Australia’s most overcrowded city are skeptical of high immigration with eight in 10 opposed to a faster rate of population growth.

A Newspoll of more than 1,000 voters in Sydney and regional New South Wales found 25 per cent of respondents wanted Australia’s immigration pace to be slashed.

Another 55 per cent wanted immigration to stay where it is, meaning 80 per cent of people surveyed in Australia’s most populous state didn’t want the pace of population growth to accelerate beyond a recent record high.

Just 16 per cent of those participating in the Newspoll survey, published in The Australian, favoured a higher immigration rate.

In 2018, a record 832,560 permanent and long-term migrants decided to call Australia home, marking a 7.1 per cent increase compared with 2017, official statistics released in February showed.

With the number of people leaving Australia for good taken into account, the nation’s annual net immigration rate stood at 291,250, the highest in four-and-a-half years.

The vast bulk of new arrivals settled in already overcrowded Sydney and Melbourne. 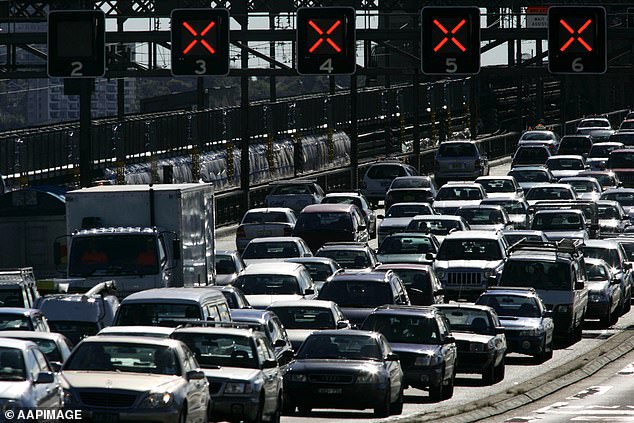 A Newspoll of more than 1,000 voters in Sydney and regional New South Wales found 25 per cent of respondents wanted Australia’s immigration pace to be slashed (Sydney Harbour Bridge at peak hour pictured)

High population growth from skilled migrants and students has been credited with stopping Australia’s economy from slowing down.

When immigration was taken out of the equation, Australia last year fell into a per capita recession for the first time in almost 13 years.

Economic output, or wealth generated by every Australian, shrunk by 0.1 per cent in the September quarter and by another 0.2 per cent during the final three months of 2018, Australian Bureau of Statistics national accounts data released this month showed.

This was the first per-capita recession since 2006, when interest rates rose three times.

Over-development in Sydney has been a key issue during the state election campaign, with voters in NSW heading to the polls on March 23.

Sydney is already home to more than 5.5million people, making it Australia’s most overcrowded city.