Next are selling plus-sized clothing for THREE years-olds

Controversial? Next’s Plus Fit range caters for youngsters aged from 3 to 16-years-old

High-street retailer Next is selling plus-sized apparel for toddlers.

The popular fashion chain, which has more than 550 branches nationwide, has introduced a ‘plus fit’ range for children aged 3-years-old and up.

Offering larger waistbands to accommodate the growing size of UK children, the move has been hailed inclusive by some – but health experts fear it’s a warning sign of obesity’s worsening problem.

Consisting of forty-seven items, the capsule collection – marketed as ‘more generous through the waist and hips for a comfortable fit’ – is predominately aimed at teenagers and young adults, both male and female.

This includes schoolwear, such trousers and shirts.

The latter are made from ‘stretch cotton blend’ to afford more give, while the trousers boast an extra 5cm worth of material – measuring 58cm in circumference, compared to 53cm for the standard fit.

However, the Plus Fit range also offers out-of-school items such as jeans and jersey boot-cut leggings.

According to a report in The Telegraph, this makes Next the only major clothing store in Britain to be selling casual wear for overweight toddlers.

It comes less than a year after data from the National Child Measurement Programme for England showed that more children than ever before are clinically obese.

One in three 10 and 11 year olds – 34.2 per cent – were deemed to be overweight or obese in 2015-16. Experts say that it is the highest percentage on record for children in year six is up on the 33.2 per cent recorded for the previous year. 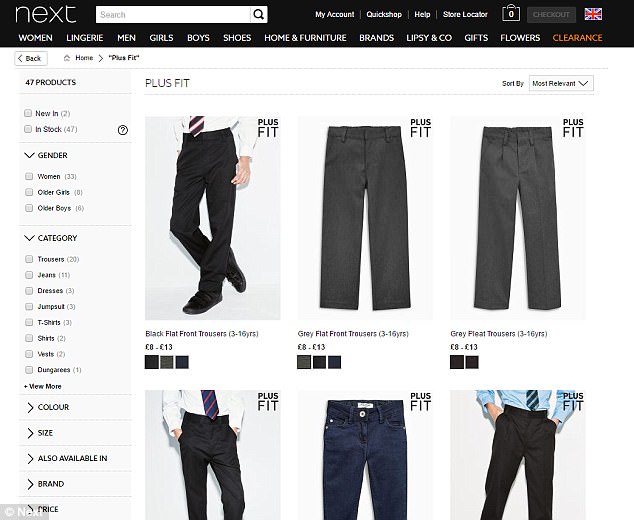 Sign of the times: The range offers both school wear and casual items such as jeans and jersey leggings –  thought to be a first for a major UK retailer

Meanwhile, more than one in five children aged four or five – 22.1 per cent – were considered overweight or obese.

And, worryingly, the trend doesn’t look set to level-off anytime soon. On the contrary, global childhood obesity rates are set to sky-rocket in the next few years.

By 2025, around 268 million children aged between five and 17 years old will be overweight, according to estimates by the World Obesity Federation.

More than 90 million of those children will be registered obese, the data suggests.

It is a significant revision up from previous estimates by the World Health Organization, which had envisioned 70 million children would be overweight in 2025.

‘Parents need to be able to buy comfortable clothes for their children, however it’s pretty shocking that clothes retailers are having to introduce plus sizes for children,’ Professor Russell Viner, Officer for Health Promotion at the Royal College of Paediatrics and Child Health, told MailOnline. 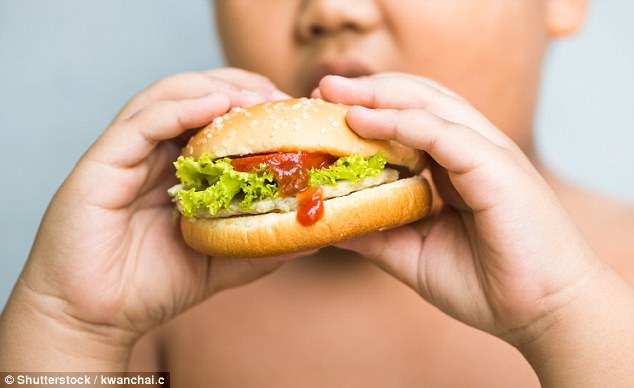 Fat chance: By 2025, around 268 million children aged between five and 17 years old will be overweight, according to estimates by the World Obesity Federation

‘Sadly though it’s not surprising – we’re seeing children younger and younger struggling with their weight. Frighteningly 1 in 5 are overweight or obese when they start primary school, rising to 1 in 3 when they leave.

‘This is another example of obesity becoming a ‘normal’ part of childhood when it shouldn’t be. We need to carefully balance not stigmatising obese children and young people without accepting that obesity is just a fact of life.

‘Obesity is on the political agenda – the sugar tax comes into force in April next year and the sugar reduction programme is underway but much more needs to be done. Government must get tough on advertisers and stop junk food being advertised at children during family TV shows, the value of healthy eating should be on the agenda in schools, and physical activity needs to be a core part of every child’s life.’

A representative for Next told MailOnline: ‘Next first introduced ‘plus’ fit trousers in 2007 and then followed this with ‘slim’ fit in 2010.

‘They were introduced to cater for children with different size waist and hips, taking into account that children come in all different shapes and sizes.

‘Standard fit caters for the average sized child and makes up the majority of Next’s ranges and sales, followed by ‘slim’ fit garments.’