Next could be a big British tech success story

What’s NEXT for retail champ? It may never be an Amazon or Shopify, but Next could be a big British tech success story

By Anne Ashworth For The Daily Mail

Stylish: Next could be a big British tech success story

The woes of the High Street have left a serious casualty count. Yet Next not only seems to have escaped much of the attrition, it is also being placed by some observers in the same winning category as Ocado.

Others maintain that the store – already the UK’s biggest name in online fashion, is set to become a mini-version of Amazon – or to be Britain’s answer to Shopify, supplier of online shop fronts to some 500,000 retailers.

Are these views merely hype? Or are they based on a reasoned assessment of Next’s potential, raising hopes that its shares are worth a bet, although they have leapt by 80 per cent over the past 12 months? The optimism about Next’s future has largely been prompted by its reaction to the pandemic. The company adapted fast, having concluded that the shift to online was unstoppable.

Chief executive Lord Wolfson, known for his grasp of detail and ability to see the big picture (the two do not always go together) remarked: ‘History has been given a shove and, having moved forward, seems unlikely to reverse.’

So effective were Next’s efforts that full-price sales in the 13 weeks to the start of May were only down 1.5 per cent on the same period of 2019. The forecast for full-year profits has been increased.

During the lockdowns, Next made the most its databases and logistics, investing in these resources which have been built up over several decades.

The Next Directory catalogue appeared in 1987 under the leadership of the audacious George Davies, who later created Asda’s George range and Per Una at Marks & Spencer. The move into online shopping was made in 1999. Many of Next’s rivals did not have access to such capabilities – or to a slick click-and-collect offer in branches – of which the chain still has about 500, after some closures.

Another reason for the enthusiasm about Next’s prospects lies in its mix of merchandise. Through its Label online-only arm, you can choose between 200,000 or so items from other brands, including Cefinn, Samantha Cameron’s label, The White Company and Reiss, the upmarket clothing chain in which Next has acquired a 25 per cent stake. Deals have also been struck with Laura Ashley and L Brands, owner of Victoria’s Secret lingerie.

But Next has wider digital aspirations. Its new Total Platform division, described as ‘Ocado-like’, will allow other smaller brands to use all of Next’s digital and other infrastructure to sell and distribute. Reiss will be among the first to be showcased on this system.

However, despite its recent achievements, you may still be doubtful whether Next can transform itself, given the size of the competition. 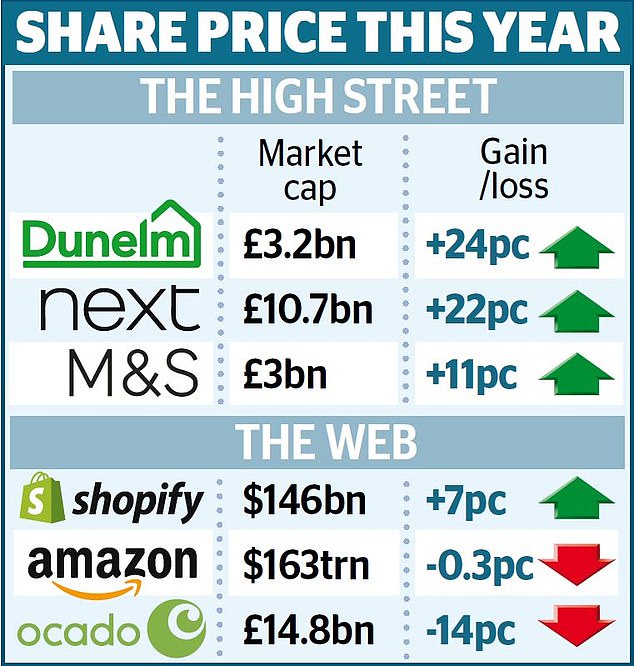 Amazon is mighty and wily, easily able to crush opponents. Asos, the edgy online fashion player, has been strengthened by the acquisition of Arcadia brands. Given the competition’s muscle, you have to decide whether Next’s share price already reflects the possible payback from its strategy. Russ Mould of AJ Bell thinks the shares, while not ‘extremely expensive’, are fairly priced at this level.

Aruna Karunathilake, manager of Fidelity UK Select’s fund, which has a large holding in Next, argues the market is yet to appreciate the company’s capacity for transformation. At the close last night, the shares stood at 8000p. Goldman Sachs has raised its price target to 9400p. Betting on a speedy return would be very risky, but it could be worth contemplating a longer-term investment if you want to back a company that’s supporting the High Street and ought to be the beneficiary of some of the billions in lockdown savings.

Next may never be another Amazon. But it could be a big British tech success story