It is the show set in London’s East End which has never been afraid of tackling difficult issues.

And the upcoming series of Call The Midwife will be no different – as the show will explore gender identity through a character who discovers she is a hermaphrodite.

The eighth series of the medical drama, which will air in January, will also include storylines of a harrowing abortion, a baby born with a cleft palate and a prostate examination.

Call the Midwife stars line up for a promotional shoot, it is die to return for its eighth series

Speaking about the episode, show creator Heidi Thomas said: ‘We meet a young woman who on the eve of her marriage discovers she’s a hermaphrodite and that isn’t just a medical story, it’s about questions of identity – who are we, who do we think we are, what does it mean to have a female body?’

Actress Helen George, who plays Nurse Trixie Franklin in the BBC One drama, said the themes explored in the programme ‘hold up a mirror up to society’.

‘It was fantastic. It’s a really interesting storyline and one which you wouldn’t really think would be on CTM – I don’t know why’, she said.

‘With my modern eyes it felt like a modern storyline – but of course that’s what we’re dealing with in the early 60s… it brings together the medical side with the emotional turmoil that she has to face.’

When asked if it chimes with modern issues about gender identity and being transgender, she said: ‘Yeah I think Heidi’s always very clever with that – it’s always timely but of its time. 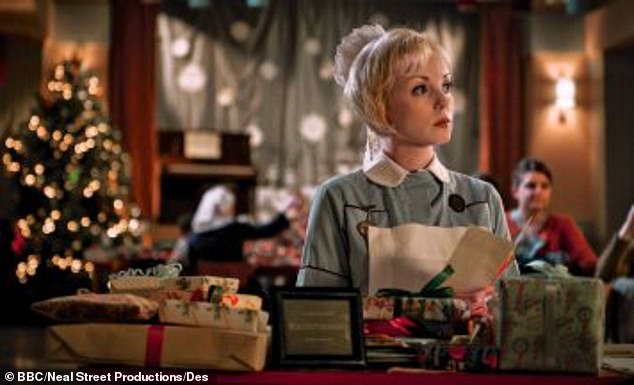 Helen George, who plays Nurse Trixie Franklin, in the BBC One drama, said the themes explored in the programme ‘hold up a mirror up to society’.

‘There’s the abortion storyline and that went on in Ireland and that’s still going on, and has still to come to fruition.’

As well as some shorter hemlines to mark the year of 1964, the season will see moments including one of the ‘first ever prostate examinations on popular television at 8pm’ and the first cervical smear test ever done in London.

Miss George who took some time off from the show after giving birth to her daughter last year, said she had returned to set ‘more motherly’ but admitted that it is ‘hard’ juggling work and motherhood.

‘Yeah I mean it’s definitely hard watching that [the show] on a big screen and realising how big my bags are this year, but yeah it’s hard being a working mum but it’s good at the same time, I’m lucky to be able to do it’, she said.

The star, 34, who had an elective caesarean after hearing ‘horror stories’ about childbirth through her role on the show, also said she had taken her daughter on set – although she stopped short of putting her in the programme.

And the latest addition to the cast Miriam Margoyles was revealed to snack on raw onions on set to keep herself fit and healthy.

She added: ‘She swears by it. She had a whole raw onion every morning for breakfast. I think it’s good for your heart.’ It was also claimed Miss Margoyles was ‘naughty’ during filming and would often shock the camera crew by swearing on set.

The Call The Midwife Christmas special, which sees the nuns coping with several Chinese orphans, will air on Christmas day.