It’s been a few days since Aidan Hutchinson sent shockwaves through the NFL world with his rendition of Billie Jean.

Hard Knocks returned with a bang Tuesday night as the Detroit Lions put on a show in the first episode of the new season.

Hutchinson, 22, stole the headlines for his version of the Michael Jackson smash hit in his initiation performance. He got all of his teammates joining in as the entire room went wild for both his voice and dance moves.

Penei Sewell said his teammate ‘killed it’ when asked about the display, although admitted he seemed a bit nervous at the start.

‘Butter. He scratched up a little bit in the beginning, but I get it. Jitters,’ Sewell told reporters. 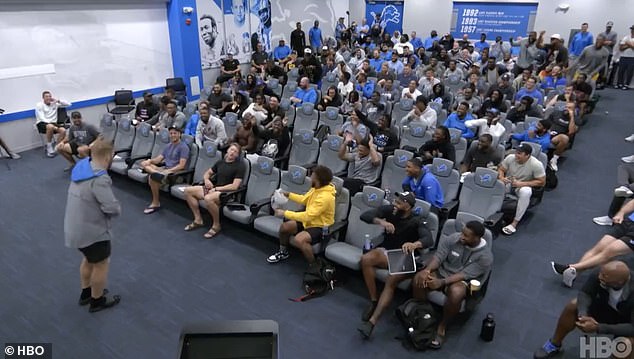 On Twitter, one user wrote: ‘Aidan Hutchinson bringing everyone to their feet and together in singing Billie Jean is probably a top-10 Detroit Lions moment of the past decade.’

Hutchinson has explained his reasons behind his song choice and revealed he practiced ahead of the real thing.

‘Everybody likes Mike. Who doesn’t like Mike and I actually found the song about three days before he asked me to do it so thank the lord he didn’t ask me any earlier than that, I would have been screwed,’ he told Woodward Sports Network. 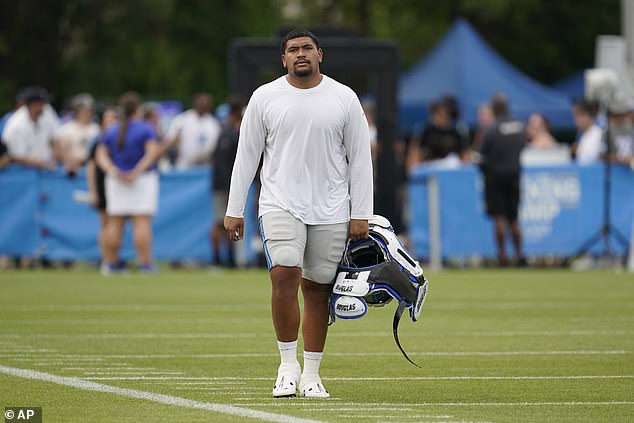 ‘I was rehearsing the verses in my head for a couple of days. My name was called and I had to step up.

‘I wasn’t that nervous. Obviously you’re a little nervous because you’ve got to sing in front of the boys. It’s a little weird but you’ve just got to embrace it and own it and just know that everyone’s got to do it.

‘Every rookie here has done it.’

One fan pointed out that a Lions player in the second row took off his shirt and threw it into the air as the roster went mad for the performance.

‘Why is no one talking about the best part of this Aidan Hutchinson singing clip? Dude in the 2nd row rips his shirt off, throws it to the front row and the dude in the yellow no look catches it and immediately starts waving it. Most electric moment of the episode,’ the Tweet read.

Another joked in response: ‘That dude who caught the shirt better be lining up trips right formation!’

HBO’s popular show has entered its incredible 19th edition, and has become a staple for football fans, airing ahead of the start of the season each year.

2022 was the turn of the Lions, as they look to bounce back from their horrendous 3–13–1 season in 2021 under head coach Dan Campbell.