After two consecutive seasons of falling television ratings, the NFL continues to face waning fan interest as a majority of Americans – particularly whites and republicans – object to players kneeling in protest of racism during the national anthem.

According to a new NBC News/Wall Street Journal poll, fewer people say they follow the league closely today than four years ago, and the biggest drop-off appears to be those fans who disagree with players demonstrating to raise awareness about social issues, criminal justice reform, and police brutality against minorities.

Of the 900 registered voters polled, 52 percent said they continue to follow the league closely, which is down from 58 percent in 2014. However, the margin of error was plus or minus 3.27 percentage points, so that figure in itself may not be too revealing.

Other findings help to paint a more specific picture.

Of those who participated in the NBC News/Wall Street Journal poll, only 10 percent of republicans and just 38 percent of white respondents said the protests are appropriate 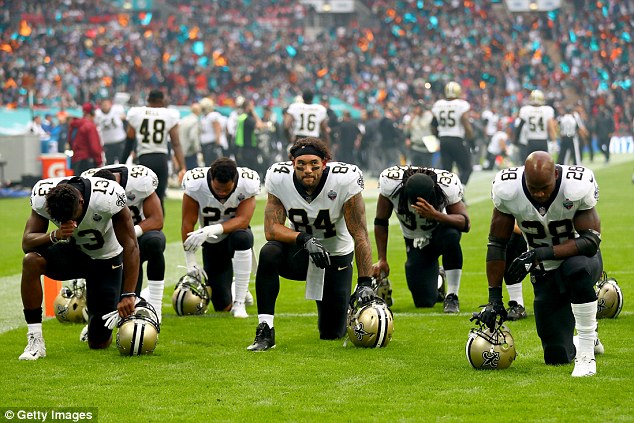 The peaceful demonstrations, which began in 2016, were primarily a reaction to the deaths of African-American men at the hands of law enforcement. Players are also working to raise awareness about other issues, like criminal justice reform and educational inequality

Men older than 50 continue to follow the game closer than any other demographic despite their own generally negative views about the protests, according to The Wall Street Journal. Those who have stopped watching the game altogether tend to be those with the most unfavorable few of the protests.

Namely, republicans are the most dissatisfied with the game. In 2014, just 16 percent of republicans said they did not follow football closely, but that number has exploded up to 39% in the latest data.

Only 10 percent of republicans and just 38 percent of white respondents said they felt the protests are appropriate.

But not everyone opposes the protests: 72 percent of democrats and 56 percent of those polled between the ages of 18 and 34 – a critical demographic – believe the demonstrations are appropriate. 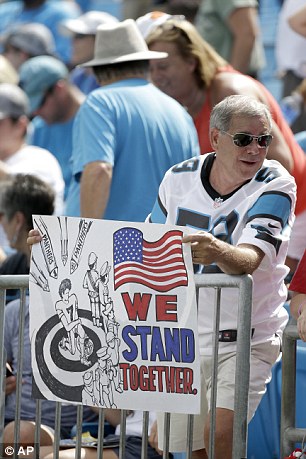 Regardless, the poll is ‘still reflecting a lower audience base than we measured in 2014,’ republican pollster Micah Roberts told the Journal. ‘It’s not going in the right direction.’

Respondents were not asked directly if their viewing habits changed because of the protests, but Roberts – who conducted to the survey with democratic pollster Fred Yang – believes that is a logical conclusion based on the subgroups that saw the biggest changes from 2014.

‘The anthem protests are having an effect on the viewership,’ she told the Journal.

The NFL is still working towards a resolution on a national anthem policy. In May the owners announced a new set of rules allowing players to remain in the locker room during the anthem while requiring any team personnel on the field to stand. Teams with personnel in violation of the new policy would have been subject to fines, and those teams would have the right to fine their own players as they saw fit.

However, since then the league and the NFL Players Association have been meeting in East Rutherford, New Jersey to work towards a compromise on the issue. According to an ESPN report, both sides are ‘encouraged’ by the dialogue, but a resolution is not expected to be made by next week’s opener. 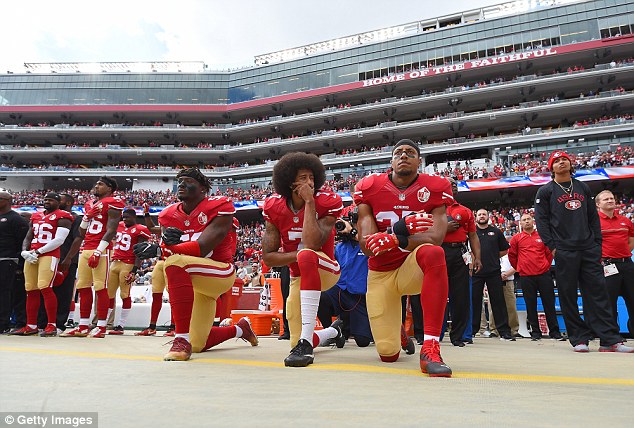 The protests began in 2016 when then-49ers quarterback Colin Kaepernick (No. 7) refused to stand for the national anthem as a way to raise awareness about inequality and police brutality against minorities. He is now involved in a lawsuit accusing the NFL of collusion 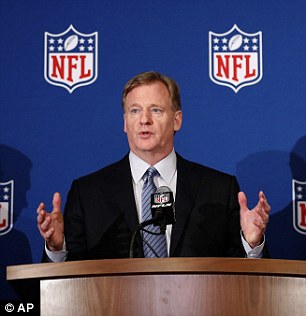 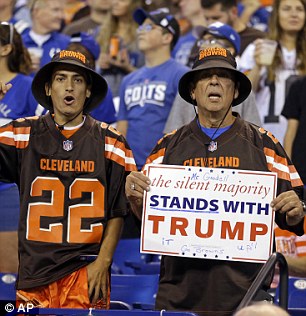 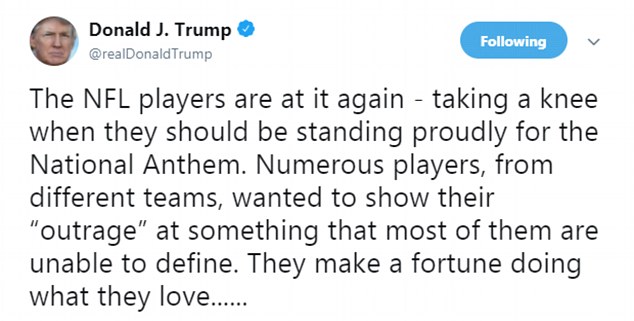 Despite the declining interest, NFL games still accounted for 37 of the top 50 highest-rated broadcasts of 2017.

Politics aside, the poll found that fewer white viewers were tuning in to games. While 58 percent of non-white democrats said they still follow the league closely, only 50 percent of white democrats are avid viewers, which is down from 59 percent in 2014.

COLIN KAEPERNICK’S LAWSUIT AGAINST THE NFL HEADS TO COURT 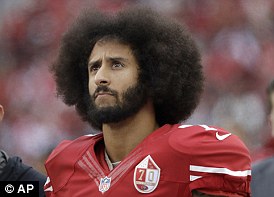 By Kayla Brantley for DailyMail.com

Colin Kaepernick’s collusion claim against the NFL is going to trial after the league’s request to dismiss the grievance was denied.

In what is Kaepernick’s biggest win so far in this case, an arbitrator denied the league’s request Tuesday to throw out the quarterback’s claims that owners conspired to keep him out of the league because of his protests of social injustice.

The former 49ers quarterback argues that owners have colluded to keep him off any NFL roster since he hit free agency in 2017 – after he began the widespread peaceful protests by kneeling during the national anthem to protest police brutality and racial inequality.

Kaepernick contends the owners violated their collective bargaining agreement with players by conspiring to keep him off of teams.

The case hinges on whether owners worked together rather than deciding individually to not sign Kaepernick.

A similar grievance is still pending by unsigned safety Eric Reid, who played with Kaepernick in San Francisco and was the first player to join him in protesting.

President Donald Trump has seized on the issue, beginning with a September rally in Alabama when he referred to the demonstrating players as ‘sons of b******.’

In early August, Trump demanded on Twitter that the ‘$40,000,000 commissioner’ of the NFL suspend players for a whole season if they kneel during national anthem more than once.

‘The NFL National Anthem Debate is alive and well again – can’t believe it!,’ Trump wrote in the tweet.

The protests began in 2016 when then-San Francisco 49ers quarterback Colin Kaepernick refused to stand for the national anthem as a way to raise awareness about inequality and police brutality against minorities.

The demonstrations were primarily a reaction to the deaths of African-American men at the hands of law enforcement.

ESPN reported the earnings after the Green Bay Packers, a public company, disclosed its financial information for 2017, revealing the franchise had received $255 million in revenue sharing.

That means 32 teams split around $8.1 billion, and that figure does not represent the league’s entire revenue, which was estimated at $14 billion for 2017 – the most of any professional sports league, according to Bloomberg. Per league rules, the NFL shares just over half of its revenue among all teams.

The NFL was a tax-exempt non-profit until 2015, when it changed its status with the IRS.

The money primarily came from revenue from the league’s television packages, according to ESPN. That is an increase of 4.9 percent, due in part to the rising value of the NFL Thursday Night Football franchise.

According to Bloomberg, the NFL added another $50 million for its streaming deal with Amazon, which the league has extended for another two years and $130 million. Other added profits came from the incremental raises that were previously build into the NFL’s television deals.

Most importantly for the NFL, Packers president Mark Murphy said the lingering effect of some issues, including the national anthem controversy, did not harm to bottom line. 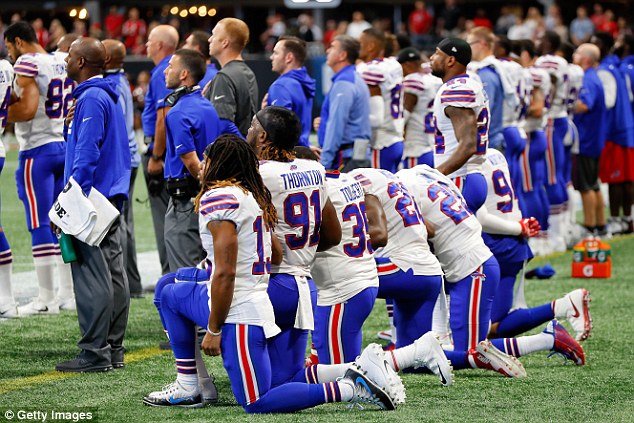 Buffalo Bills players kneel during the national anthem prior to the first half against the Atlanta Falcons at Mercedes-Benz Stadium on October 1, 2017