Watson was given the ban Monday by an independent arbiter over dozens of sexual misconduct allegations dating back to his time with the Houston Texans.

The ruling was labeled as a ‘joke’ across social media by critics who felt a six-game suspension was insufficient given the allegations against Watson and the NFL is now expected to increase the punishment.

The 26-year-old quarterback is accused of sexually assaulting and harassing dozens of female massage therapists in the Houston area between 2019 and 2021, when he was a member of the Texans.

The NFL has now exercised its collectively bargained right to file an appeal in the wake of the suspension by jointly appointed NFL disciplinary officer Sue L. Robinson.

This is a new disciplinary process for the 2022 season and has not be put in place before.

Under Article 46 of the collective bargaining agreement, commissioner Roger Goodell can hear the appeal himself or appoint a third-party arbiter.

NFL is expected to seek to suspend Watson for the entire season, according Pro Football Network’s sources, while another cited a shorter ban of 10 games and a $1million fine. 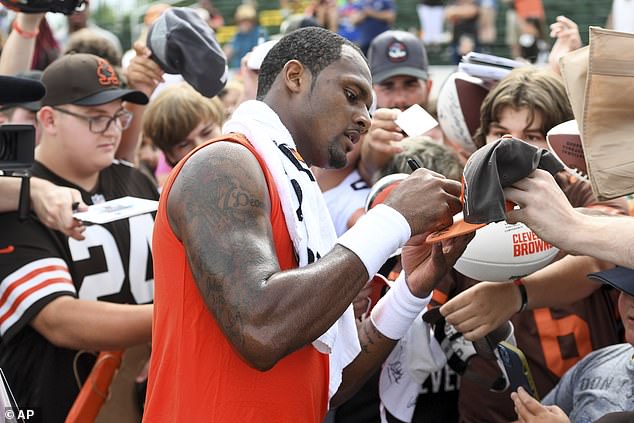 Robinson wrote in her report that the league had recommended Watson be banned for the entire 2022 regular season and postseason.

However, Robinson sought to differentiate between violent and non-violent sexual conduct and concluded that Watson’s conduct “does not fall into the category of violent conduct that would require the minimum six-game suspension” which the league had established as “by far the most commonly-imposed discipline for domestic or gendered violence and sexual acts.”

The NFL and the players’ union each had three days to appeal the decision and league has now done so.

The players’ association now has two days to respond to the appeal and following the NFL’s decision to appeal it reportedly looks increasingly likely that the final decision will have to be made in federal court.

Watson was reportedly seen speaking with the Browns’ PR on his way off the practice field on Wednesday, immediately after the NFL’s decision to appeal was announced. 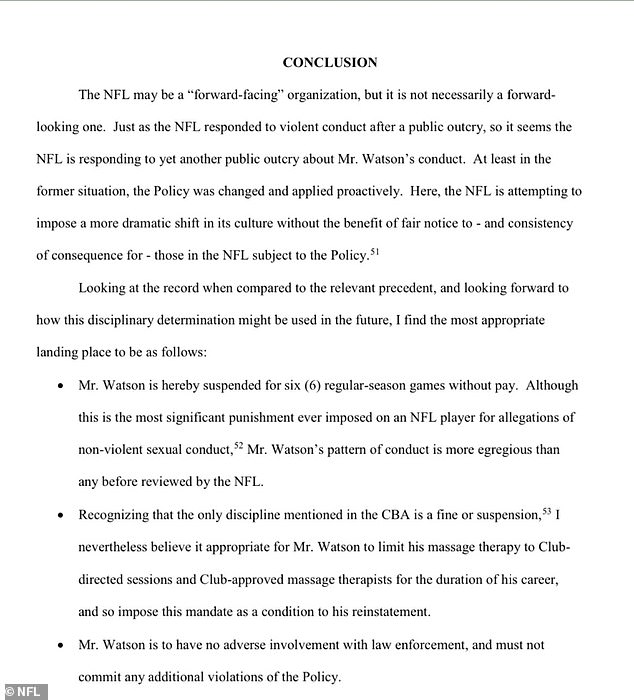 In her ruling (pictured), Robinson wrote that Watson should limit his massages to club-directed sessions with club-approved massage therapists for the ‘duration of his career’

Monday’s suspension was revealed after Watson reached settlements with three more accusers, leaving him facing just one last lawsuit after being sued by 25 women, one of whom dropped her case.  Specific dollar figures for the 23 settlements have not been revealed.

The NFL was pushing for an indefinite suspension and a fine of no less than $5 million, according to The Associated Press.

By sitting out six weeks, Watson will lose around $345,000 in game checks. He signed a backloaded $230 million contract extension after being dealt to Cleveland in March.

As it turns out, that deal effectively saves him $15.8 million under a six-game suspension by minimizing his payments in 2022. Watson would have lost more than $16.2 million in game checks had he been compensated evenly over the five-year deal. 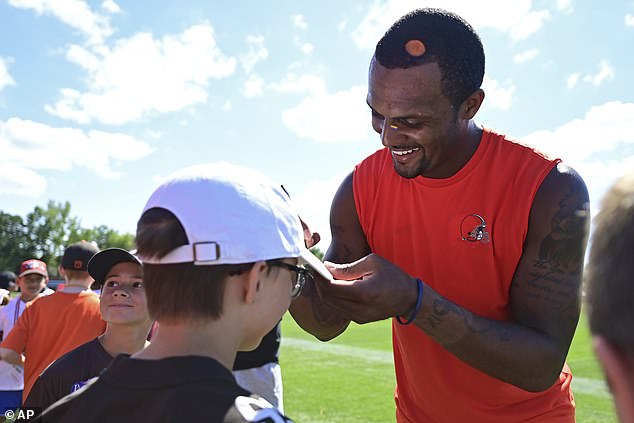 The settlements were announced by Houston attorney Tony Buzbee, who has represented all 25 plaintiffs, including the  woman who dropped her lawsuit against Watson.

‘After lengthy and intense negotiations, I can confirm that, late last night, our team resolved three of the four remaining civil cases with Deshaun Watson,’ Buzbee said in a statement provided to DailyMail.com. ‘We will continue to discuss the remaining case with Watson’s legal team, as appropriate.’

Buzbee did not identify the women who have settled with Watson.

Watson has specifically been accused of forcing two women to perform oral sex on him, ejaculating on three women, and forcibly kissing another, while 18 women say he touched them with his penis during massages, according to court files reviewed by DailyMail.com. 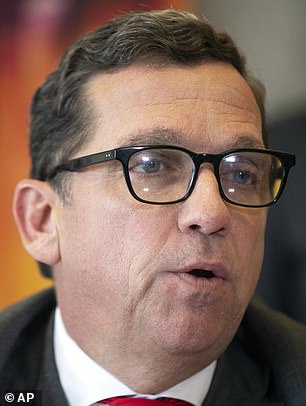 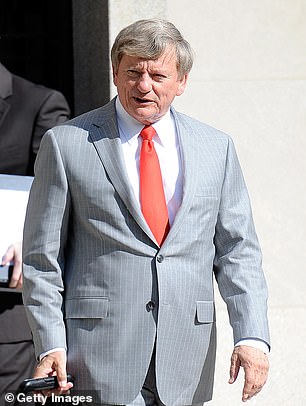 Although he has now settled 23 of the 24 lawsuits, Watson has denied any wrongdoing, and two Texas grand juries have declined to proceed with charges against him.

In her ruling, Robinson wrote that Watson should limit his massages to club-directed sessions with club-approved massage therapists for the ‘duration of his career.’ She also recommended further penalties if he finds himself in any subsequent legal trouble.

Fans have been extremely critical of Robinson’s decision, which they felt was unfairly light given previous suspensions given to NFL players. Tom Brady, for instance, got four games over his role in the infamous deflategate scandal – a cheating accusation that the league struggled to prove in 2015.

Many were quick to point out on social media that former Atlanta Falcons running back Calvin Ridley got a full-season suspension for placing a bet on his own team. The 2022 ban will cost him his base salary of $11.1 million. 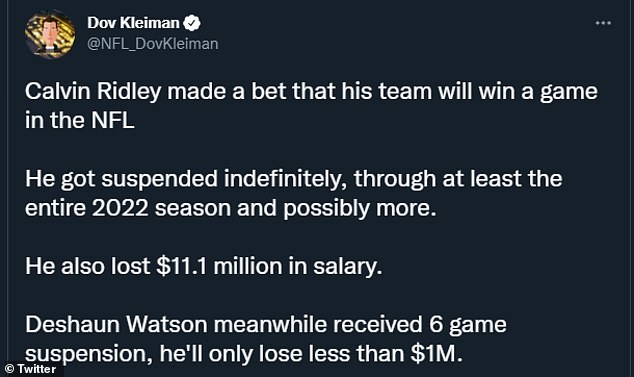 Many were quick to point out on social media that former Atlanta Falcons running back Calvin Ridley got a full-season suspension for placing a bet on his own team. The 2022 ban will cost him his base salary of $11.1 million

Others, such as New York Times baseball editor Benjamin Hoffman, pointed to Josh Gordon’s repeated suspensions for drinking and recreational drug use

Previously, in July, the Texans reached confidential settlements with 30 women who made allegations against Watson, including accusers who did not file lawsuits against him.

The NFL club was accused of enabling Watson by allegedly ignoring his behavior and securing him a membership at a local hotel and club, where he allegedly sexually harassed and assaulted female massage therapists.

One of his accusers, Toi Garner, filed a lawsuit against the Texans in June, which Buzbee said at the time would be the first of many. However, before those suits could be filed, the team reached a deal with the 24 plaintiffs and six other unidentified women who have stated intentions to make claims against the Texans organization.

‘We were shocked and deeply saddened when we first learned of the allegations against our then franchise quarterback in March 2021,’ read a statement from the McNair family, which owns the team.

‘Although our organization did not have any knowledge of Deshaun Watson’s alleged misconduct, we have intentionally chosen to resolve this matter amicably. This is not an admission of any wrongdoing, but instead a clear stand against any form of sexual assault and misconduct.’

In a July statement, Buzbee said Garner’s lawsuit would be dismissed with prejudice ‘as soon as the appropriate settlement paperwork is complete.’

Not every woman has accused Watson of sexual misconduct, and 15 have issued statements of support for him at his attorney’s request.

Following the publication of the Times piece, the Texans were added as a defendant in the sexual misconduct lawsuits for allegedly facilitating the massages. The NFL club was accused of securing Watson a membership at a local hotel and private club, the Houstonian, where some of the massages were alleged to have taken place.

One woman, who massaged Watson at the hotel but is not identified in the article, told the Times that she was told the room they used was ‘registered to a member of the Texans’ training staff.’