Both the NFL Players Association (NFLPA) and the league itself are facing criticism after coming to terms on a new collective bargaining agreement that guarantees higher salaries and a 17th regular season game for each team, but also reduces benefits for disabled retirees who may already be struggling to pay their mounting medical bills.

‘The new CBA has a tougher definition of “disabled” than social security does,’ tweeted former Broncos offensive lineman Ryan Harris after the NFLPA voted 1,019 to 959 in favor of approving the owners’ offer before Saturday’s deadline. (At least 500 players abstained)

‘This will have deep impacts for former players and their families. The owners won. Got everything they wanted WHEN they wanted it.’

‘@TomBrady I’m shocked you are happy with the #CBA outcome,’ she tweeted at Brady, linking to a Daily Mail article about her husband, who suffers from migraines and vertigo since his career ended over a decade ago. ‘[You] were the last person I would of (sic) ever thought it was ok to take from the disabled to pay the current players more.

‘Our lives are turned upside down from this disaster! 400 families will suffer. Some commit suicide,’ added Monique Pass, who later suggested that the suicide rate among former NFL players could double. 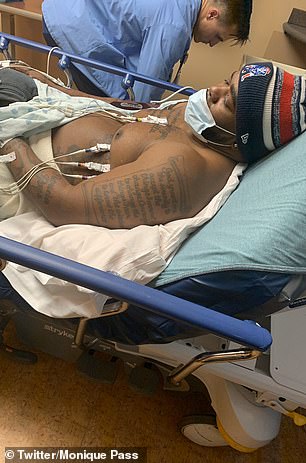 (Left) The wife of Joe Beauchamp, a former Chargers player, took a picture of her incapacitated husband to illustrate the daily struggles he faces as a former NFL player. (Right) Ex-Patriots fullback Patrick Pass gets medical treatment. Both players rely on disability payments, which will be slashed on January 1, 2021 following the new CBA 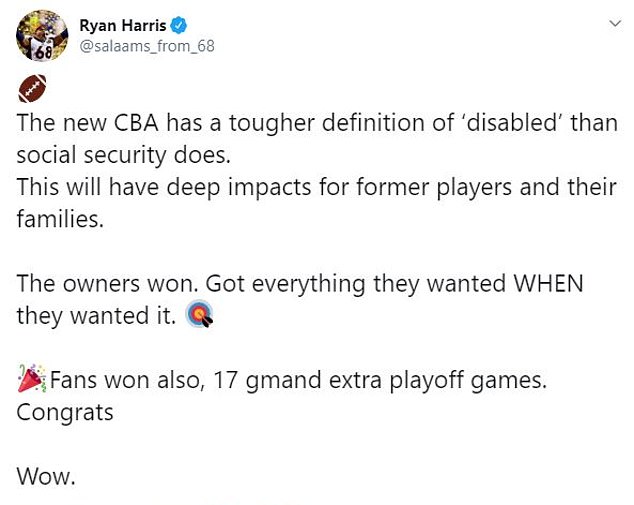 Former Broncos offensive lineman Ryan Harris knocked the deal after the NFLPA voted 1,019 to 959 in favor of approving the owners’ offer before Saturday’s deadline 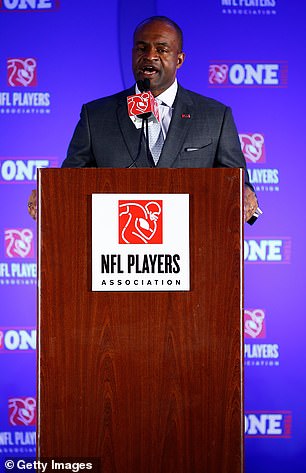 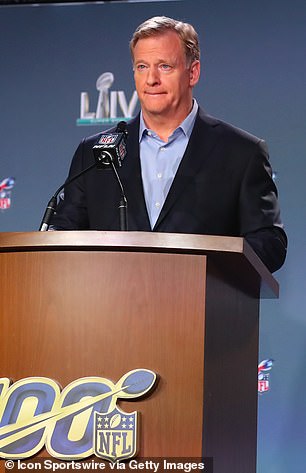 The deal, which runs through the 2030 season, was accepted by the 32 team owners last month and promises higher salaries, increased roster sizes and larger pensions for current and former players. The NFL Players Association’s membership spent the last week voting on the 439-page document after its executive board narrowly rejected it by a 6-5 vote, and the player representatives voted 17-14 in favor, with one abstention.

Clearly, there was some strong player opposition to this collective bargaining agreement as stars such as Aaron Rodgers, Russell Wilson, J.J. Watt and Todd Gurley, spoke out against it.

‘We gotta do better man,’ wrote defensive lineman Kenny Clark on Twitter after news of the agreement was reported on Sunday.

‘Can’t believe we agreed to that lol,’ tweeted Indianapolis Colts tight end Eric Ebron. ‘We can only play this game for so long and y’all didn’t want everything we could get out of it? 2030 y’all do better.’

Dawn Neufeld, the wife of former Bills player Ryan,slammed the NFL and NFLPA over the CBA 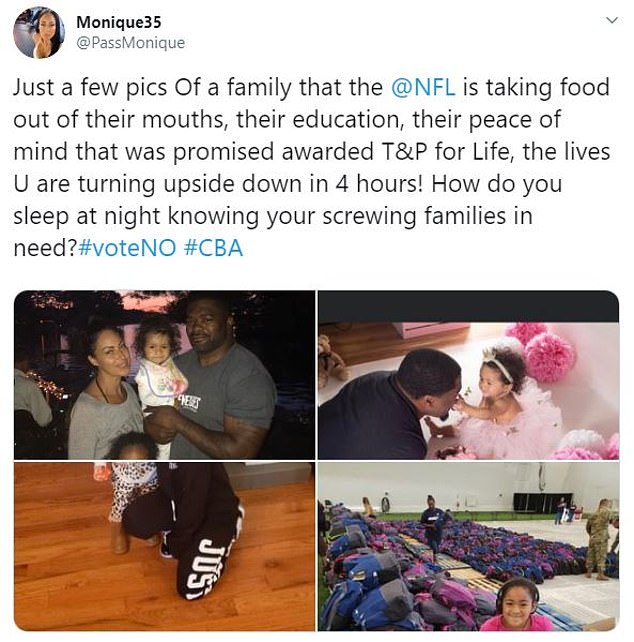 Most of the reporting regarding the NFL owners’ proposal has centered around the addition of a 17th regular season game, another round of the playoffs, or the players improving their share of revenue from 47 to 48 percent.

Some reporting has highlighted improved benefits for former players, but that really depends on who you ask.

That problem was described to the Daily Mail before Saturday’s vote by the former director of disability benefits for the NFL/NFLPA, Paul Scott, who believes the new CBA will hurt disabled former players.

‘The CBA appears to benefit more players than it hurts,’ said Scott, who still helps current and former NFL players obtain benefits through his company, Benefits Huddle. ‘I’m not defending it one way or another, but on the surface, increasing pensions, more guys having access to benefits [is good].

Specifically, players who submitted a disability application within 15 years of their last credited season, known as ‘Inactive A’ players, can expect to see certain offsets that would limit their benefits when they need them most.

One such offset involves social security benefits, which will now be deducted from a player’s benefits under the new CBA.

But under the new CBA, instead of adding $2,000 to their monthly benefit, that amount will be deducted from the $11,250 that they were getting from the NFL. 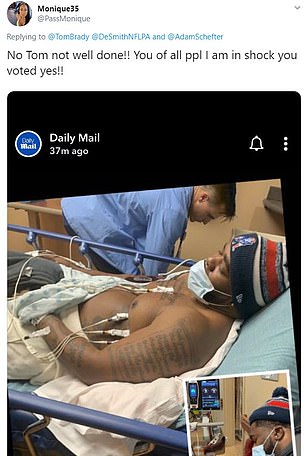 Linking to a Daily Mail article, Monique Pass tweeted at her husband’s former teammate, Tom Brady, to say she was shocked at his vote

A few thousand dollars here or there may not be a major issue for a former player like Peyton Manning, who earned nearly $250 million in his career.

However, the median NFL salary is less than $1 million annually, according to the Houston Chronicle, and the National Bureau of Economic Research estimated that roughly 15 percent of players are bankrupt within a dozen years of their retirement.

‘Let’s say they were approved for total and permanent disability based on their spine and knees ten years ago, and now they’ve been diagnosed with dementia,’ Scott told the Daily Mail. ‘The wife can’t handle three kids and a disabled 300-pound husband, so they pay for caregivers three or four days a week and if the CBA is approved by the union, their benefits will be reduced.’

To humanize the problem, some former players’ wives like Monique Pass have shared photographs on social media depicting their husbands battling health issues linked to football.

‘I was iffy about posting these pics,’ wrote Monique Pass while sharing pictures of her husband’s lifeless body sprawled across a bathroom floor. ‘I need ppl to see life after NFL. This was a month ago, my husband suffers from severe migraines and vertigo from his career. My mom called me to tell me she found my husband passed out in her basement bathroom.’ 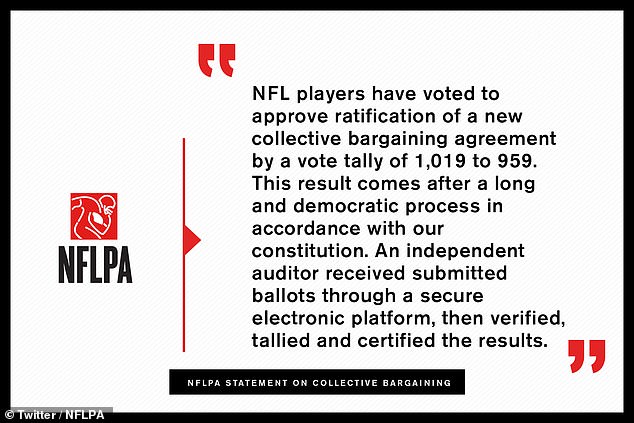 Sheilla Dingus, the president and editor for Advocacy For Fairness in Sports shared a picture of an incapacitated Joe Beauchamp, a former Chargers player who has relied on disability benefits.

‘This is Joe Beauchamp,’ Dingus wrote. ‘His wife wants you to know this is what 11 credited #NFL seasons looks like. ARTICLE 60 of the #CBA will leave guys like him out in the cold, including those who have this future to look forward to.’

Smith responded to the criticism in an open letter he posted on Twitter.

‘Did we weigh the impact of a standard social security disability offset that exists in almost every benefits package in America against pension increases for everyone and the retroactive inclusion of hundreds of players into a pension system from which they were excluded?’ he asked rhetorically.

‘It is not a decision we wanted to make or took lightly, but in totality we believe that a system that will ultimately allow more men e (sic) to qualify for disability payments was better, and that securing pensions for another decade was vitally important during an era when most Americans are losing any economic security retirement from their former employers.’ 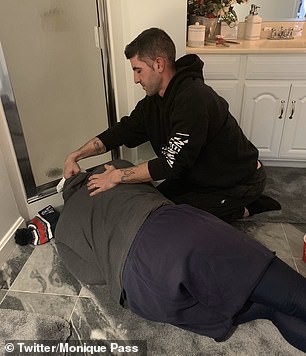 Monique Pass’s mother texted her to say that the Patrick, Monique’s husband and a former NFL fullback, passed out in the bathroom

In the wake of the vote, some players did urge unity, particularly in the face of the criticism from within.

‘The democratic process has played itself out,’ tweeted Eagles safety Malcolm Jenkins, one of the most influential voices in the union. ‘We must be committed to unifying our current and former members. While I don’t agree with the decision because of its negative impacts on some current and former players, I do respect our process and will push forward accordingly.’

‘We are pleased that the players have voted to ratify the proposed new CBA, which will provide substantial benefits to all current and retired players, increase jobs, ensure continued progress on player safety, and give our fans more and better football,’ Goodell said in a statement.

‘We appreciate the tireless efforts of the members of the Management Council Executive Committee and the NFLPA leadership, both of whom devoted nearly a year to detailed, good faith negotiations to reach this comprehensive, transformative agreement.’

A 17-game schedule won’t happen before the 2021 season. The mechanics for an uneven number of games – neutral sites or which teams get nine home games – will be worked out in the interim.

Extending the season was a nonissue with the players in 2011, when the current 10-year deal was finalized after a 4 1/2 month lockout. It has upset many of them as it will become a reality in another season or so.

Jaguars receiver Chris Conley posted his objections to a variety of items.

‘Players voted for a 17-game season,’ he said on Instagram. ‘No extra bye week. A disproportionate pay increase that will be less than promised because of the growth of the leagues revenue. No resolved player restrictions or tags. Added mandatory fines for hold outs that take an accrued season from veteran players.

‘On top of that this CBA cut benefits for some players in shaky medical condition. The worst part is that 500 people didn’t vote. We look like a weak union to the owners and for this reason they will continue to try to low ball and take advantage of players rights.’ 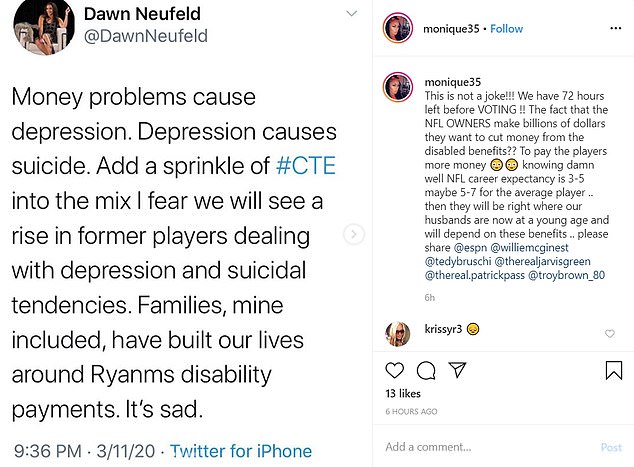 The gains the players make in the new agreement in sharing ‘a bigger portion of the growing pie,’ according to outgoing NFLPA President Eric Winston, swayed the vote.

Adding two playoff teams was not part of the bargaining process, but the owners were able to do so without union approval. That will occur this season, with only the top team in each conference getting a wild-card bye.

With labor peace for the rest of the decade, the NFL now will turn to negotiating new deals with its broadcast partners. Results of that, including digital media, should, as Winston mentioned, substantially grow the financial pie. 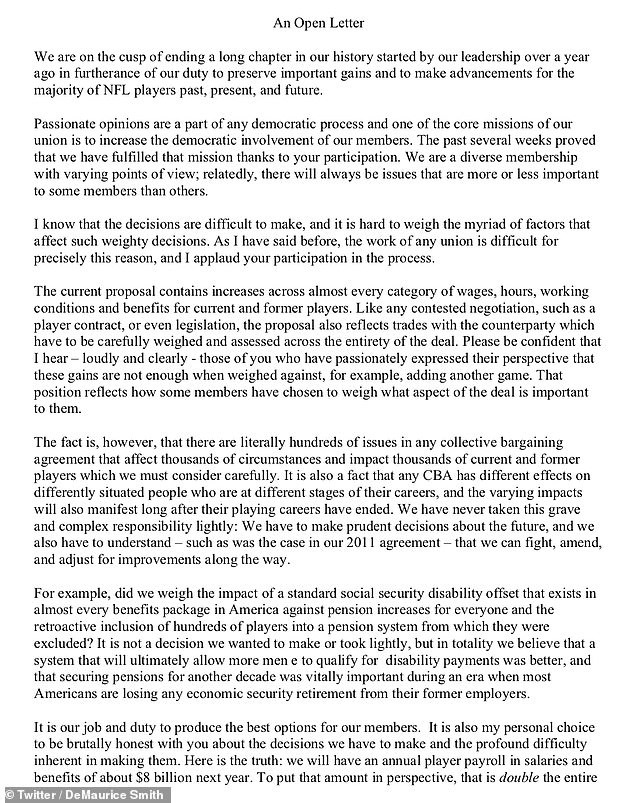