Larry Fitzgerald and Senator John McCain were good friends for more than a decade, despite their many differences

Cardinals star Larry Fitzgerald stood behind a pulpit on Thursday and told millions today of the many differences between himself and Senator John McCain.

Despite this, the Senator and the NFL wide receiver had enjoyed a close relationship for more than a decade, and became even closer in McCain’s last few years.

In a moving speech presented at a memorial service for the Senator, who died from cancer at 81 on Saturday, he said McCain had always judged people for their intentions and actions – not for their looks or background.

‘Many people might wonder what a young African-American kid from Minnesota and a highly decorated Vietnam War hero-turned-United States senator might have in common,’ he joked.

‘I’m black, he was white. I’m young, he wasn’t so young. He lived with physical limitations brought on by war, I’m a professional athlete. He ran for president, I run out of bounds.

‘He was the epitome of toughness, and I do everything I can to avoid contact. I have flowing locks, and well, he didn’t.’ 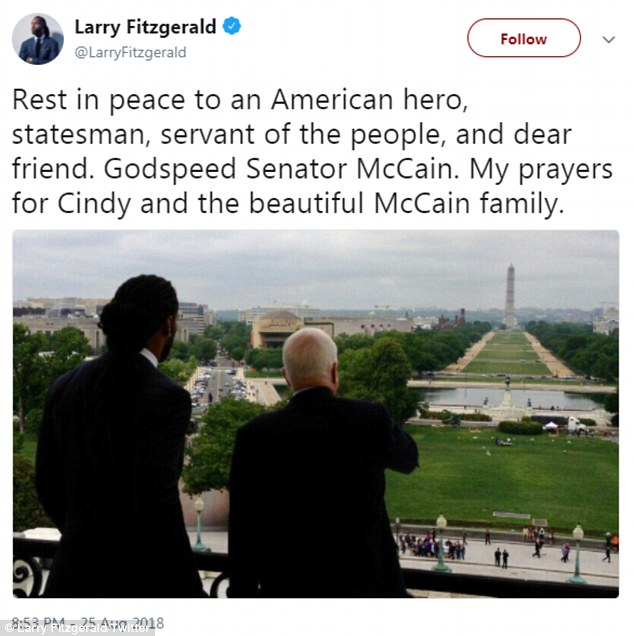 Fitzgerald shared a picture of the pair at Capitol Hill when McCain died at 81 on Sunday, having just days earlier decided to stop treatment for his cancer 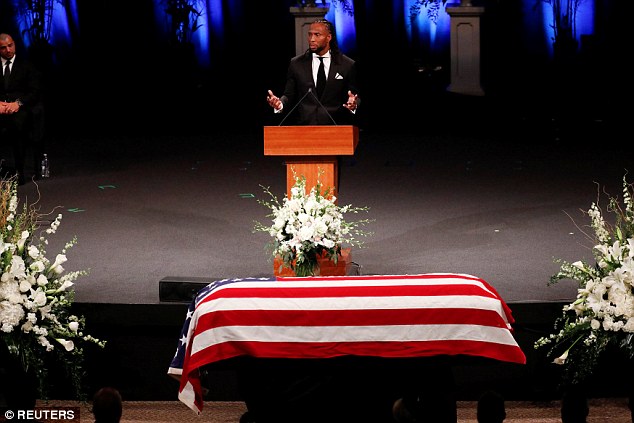 The wide receiver met McCain more than a decade ago, and have been friends ever since. Fitzgerald says the senator did not consider the exterior of people, but rather the content of their hearts

Fitzgerald, a 34-year-old father of two, said he and McCain enjoyed a ‘meaningful friendship’, despite their many differences.

The wide receiver said their enduring relationship: ‘highlights the very rare and very special qualities of Senator McCain that I came to deeply admire’.

‘[McCain] didn’t judge individuals based on the color of their skin, their gender, their backgrounds, their political affiliations or their bank accounts,’ he said.

‘He evaluated them on the merits of their character and the content of their hearts. He judged them on the work they put in and the principles they lived by.’ 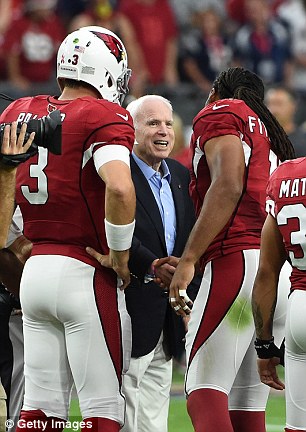 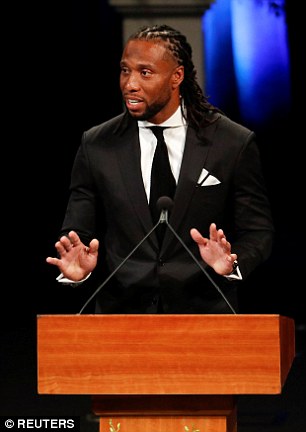 Later, Fitzgerald returned to his unlikely friendship and explained what made it so easy to look past their differences to find things they had in common.

‘What made Senator McCain so special was that he cared about the substance of my heart more so than where I came from.

‘While some might find our friendship out of the ordinary, it was a perfect example of what made him an iconic figure of American politics and service to fellow man.

‘He celebrated differences, he embraced humanity, championed what was true and just, and saw people for who they were.

‘Yes, ours was an unlikely friendship. But it’s one that I will always cherish.’ 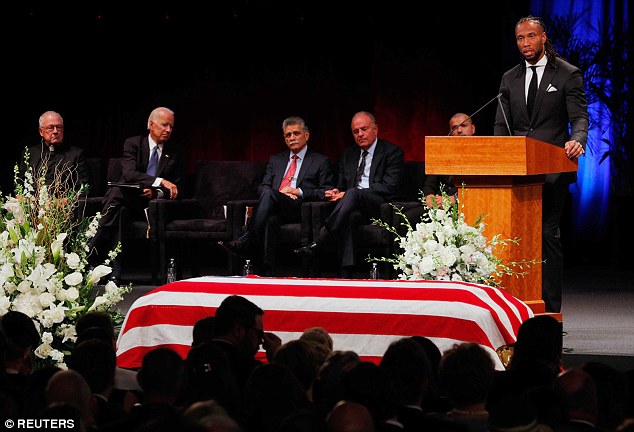 Fitzgerald was heaped with praise for his eloquent and touching tribute to his friend, with some even joking he should take McCain’s place in the Senate

The speech was praised widely on social media, with multiple Twitter users even calling for the football player to run for McCain’s spot in congress.

Many credited Fitzgerald with speaking eloquently and from the heart, even those who were surprised to see his name on the program.

McCain and Fitzgerald met when the wide receiver had just joined the Cardinals.

Fitzgerald told CBS when they met, through the team, the senator took a personal interest in him, and began counselling him on the rest of his life – despite the player’s reluctance.

‘He wanted to know how I was doing, what my plans were after football,’ Fitzgerald said.

‘And you know giving me advice on family and leadership, and all these things I didn’t necessarily think I needed, but he saw that I needed it and he took it upon himself to kind of impart some of that wisdom to me.’

Soon after, Fitzgerald travelled to Vietnam to get a better understanding of what McCain went through during the war.

The pair spend considerable time together in the years after, and Fitzgerald says he last visited the McCain’s in February.

Fitzgerald now has two sons and a stable, long-term relationship with Melissa Blakesley, who he reportedly already considers his wife.

If his eulogy is anything to go by, McCain’s initial advice was well received.