McGuire, who serves as NBC’s ‘Inside the Glass’ reporter, was in his usual spot for Mondays Columbus Blue Jackets-Tampa Bay Lightning game when a puck sailed by the Columbus bench and nearly struck the 57-year-old before smacking directly into the on-ice camera lens.

‘It’s all part of what goes on down here,’ McGuire said after the near-miss was caught by NBC cameras. 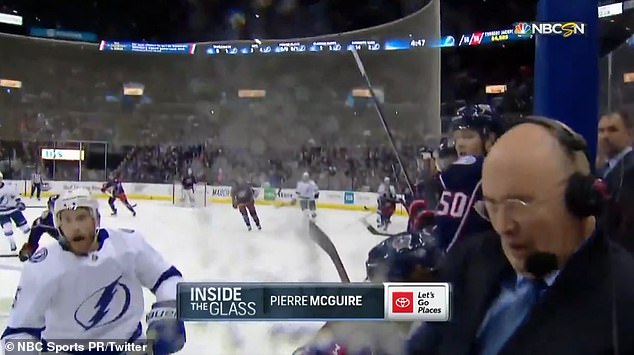 Judging by his late reaction on the slow-motion replay, McGuire did not have time to react to the incoming puck. That may have been for the best because McGuire could have disrupted the game if he raised his hands to deflect the puck away from his face.

‘You can’t get involved in the field of play,’ McGuire joked after. ‘So, keep your hands down.’

A former college hockey player at Hobart in Upstate New York, McGuire went on to become an assistant coach and scout before making his way to Canada’s TSN, where he contributed to the show ‘That’s Hockey’ beginning in 1997.

He endured surgery for prostate cancer in January of 2018, but has remained a mainstay of NBC’s NHL coverage ever since.