NHS are told to halt rationing and offer surgery to all

Health bosses have been ordered to end the shameful rationing of cataract operations in a major victory for the Daily Mail.

Hospitals have been told all sufferers must be offered surgery as soon as their quality of life is affected by vision loss.

Crucially, the NHS watchdog’s rules – the first ever national guidelines – state that medics must ‘not restrict access to cataract surgery’ on the basis of sight-test scores.

Couldn’t function: Helen Heraty (pictured) had surgery on both eyes

The move comes after the Mail’s Save Our Sight campaign showed how restrictions set by health trusts denied the operations to many until they were near-blind.

The Health Secretary said: ‘As the Daily Mail rightly highlighted, this move was urgently needed to help put an end to the unfair variations in eye care that have been happening across the country for too long.’

The guidelines were welcomed by campaigners yesterday but, as they are not legally binding, some fear cash-strapped health trusts may ignore the rules. 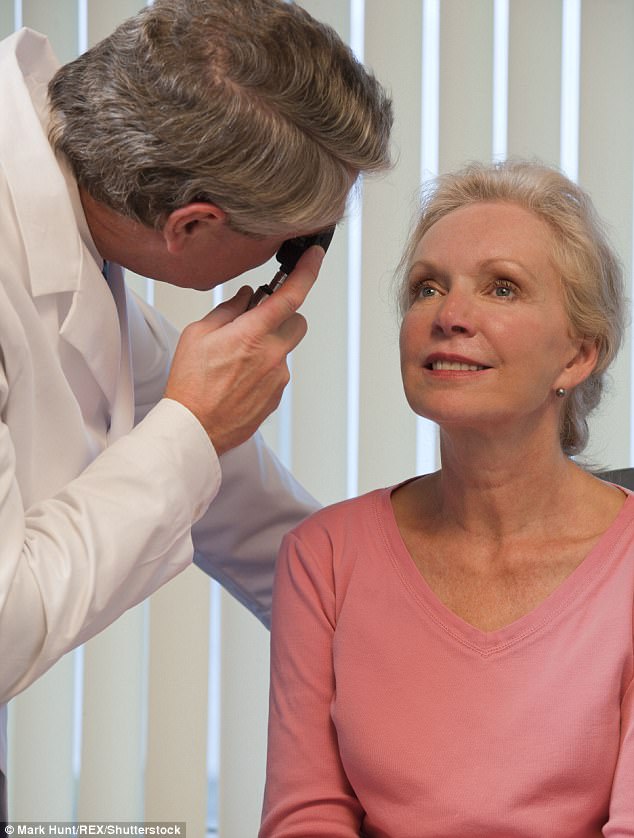 Up to half of over-65s have cataracts – 4.5million in England – which occur when the eye’s lens becomes cloudy with age

Up to half of over-65s have cataracts – 4.5million in England – which occur when the eye’s lens becomes cloudy with age. But the NHS performs only 400,000 corrective operations a year, meaning that, though it is a straightforward and relatively inexpensive procedure, many have to go without.

Figures show patients in some areas are four times as likely to be referred for cataract surgery than those living elsewhere.

I WAS NEARLY BLIND BUT DOCTORS WOULD TREAT ONLY ONE EYE

Despite being left almost blind by cataracts, Helen Heraty was told that she could have surgery on just one eye.

The 58-year-old, who runs a boutique hotel in York, was forced to borrow money from her son in order to pay for the treatment privately.

She was told by her local health trust that it could carry out the procedure on her right eye – but her left eye would have to wait until it had deteriorated further.

Mrs Heraty, who has seven children aged 12 to 28, said: ‘I became increasingly reliant on my children to help me out with everyday tasks. I couldn’t function – it was a very difficult time.

‘One eye was completely gone and in the left eye I was down to 50 per cent vision.

‘I couldn’t drive at night, I could barely drive during the day and I couldn’t see colour.

Mrs Heraty had her cataracts treatment privately at the London Eye Hospital, in Harley Street, central London, in December 2014.

She ended up opting for a far more hi-tech lens than those offered by the NHS, costing £8,000 an eye.

These have corrected her vision so well she no longer needs to wear glasses to read or see long distances.

She said: ‘I’m very, very happy with the results. I’m sat here looking at the distance and I’m able to read a book. That’s all I wanted.’

Health bosses have faced criticism for rationing cataract surgery while spending money in other areas.

Last month the NHS began prescribing Prep, a controversial drug to prevent HIV, to high-risk patients such as gay men and sex workers.

The guidance from watchdog Nice, which comes into force immediately, states that patients – not managers – should have the final say on whether they have the procedure. Medics should also operate on both eyes if needed, rather than only the worst-affected one.

Last year a Mail investigation found three-quarters of hospitals would operate only on those who had performed badly in sight tests. They were following guidance from local clinical commissioning groups, which control budgets and decide who can be treated.

Many patients said they had been refused surgery despite being almost blind, unable to make out loved ones’ faces and needing a magnifying glass to read. Others had been forced to give up hobbies such as painting and bird-watching, while some had to use savings to pay for private treatment.

Cataract surgery costs the NHS £750 per eye and takes 30 to 45 minutes, and many patients say it transforms their lives. The guidance states that, for almost all patients, the operations are an invaluable use of NHS money.

It stresses that without surgery patients are at greater risk of accidents that threaten their quality of life. Mr Hunt said: ‘It is completely unacceptable that patients have had to endure seriously impaired vision and long-term health issues as a result of untreated cataracts, and there have been too many examples of blanket restrictions on treatment.’

But charities are worried the guidelines will be ignored by some health trusts under pressure to save money. Last night health officials pointed out that the NHS could not afford to pay for thousands more cataract operations.

Dr Amanda Doyle, co-chairman of NHS Clinical Commissioners, which represents managers, said the move was ‘obviously well-intended’ but ‘may be simply aspirational’ given the health service’s financial constraints.

Fazilet Hadi, of the Royal National Institute of Blind People, said: ‘The reality is many patients have been denied surgery because an arbitrary threshold has been imposed by clinical commissioning groups. This new guidance makes it clear this is not acceptable.’

The rules had been due to come out on Tuesday but were delayed by a legal challenge from a firm that makes artificial implants. Draft guidelines had suggested doctors avoid the company’s products, but Nice agreed to remove the section in question and carry out further work.

Older women who have cataract surgery are 60 per cent less likely to suffer an early death, research reveals.

The 20-year study found the operations significantly lowered the odds of dying from diseases including heart disease, cancer, and dementia – and also from accidents.

American scientists say the routine surgery enables patients to be more independent and active, which has a dramatic effect on their overall health. Their research looked at 74,000 women aged 65 or over who were all affected by cataracts between 1993 and 2015.

Just over half – 56 per cent – had operations to remove the cataracts and they tended to be wealthier patients with medical insurance.

The scientists from the University of California, Los Angeles, calculated that these patients were 60 per cent less likely to die of any cause during the time of the study.

When they looked at the data more closely, surgery was found to reduce the risk of deaths from cancer by 70 per cent and heart disease by 58 per cent.

The authors – whose study is published in the JAMA medical journal – said cataract surgery was known to reduce the risks of falls and fractures.

But they said it also improved ‘overall functioning’ – the ability of patients to go about their daily lives. This in turn improved their physical and mental health and enabled them to live longer, they speculated.

They said it was likely that the benefits of cataract surgery extended ‘beyond vision improvement’.