NHS bosses would prefer it if patients didn’t exist

Listen to any big-wig in the NHS and you’ll hear the same mantra repeated again and again: the NHS needs fewer beds.

This belief runs like a cancer through all the upper tiers of the NHS, repeated ad nauseam in board meetings by managers who have no idea what it’s really like at the coalface.

They hang on to this because it offers a solution — albeit a fantasy — that the NHS can carry on cutting beds, and therefore costs, without this having any material impact on patient welfare.

Listen to any big-wig in the NHS and you’ll hear the same mantra repeated again and again: the NHS needs fewer beds, this belief runs like a cancer (file photo)

So we see the closing of wards and the moving of services into the community, and we’re told that this is really in the patients’ interest and more efficient. But that’s utter rubbish.

We already have some of the lowest bed numbers of any developed nation. In fact, the NHS has the lowest number of beds of any comparable health system.

Is it that the rest of the developed world is simply wasteful and lazy? Or is it that the political rhetoric of axing beds is a cost-cutting exercise that’s gone too far?

The situation is particularly bad in mental health, where beds have been reduced by 15,000 in the past six years alone. What do NHS officials think the patients in these beds were doing? Twiddling their thumbs and having a rest, courtesy of the taxpayer? They were in these beds because they were seriously unwell. 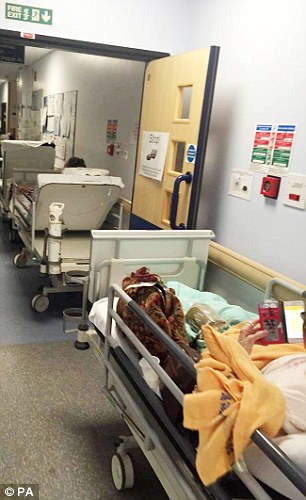 The NHS has the lowest number of beds of any comparable health system (pictured, people wait on trolleys in Royal Glamorgan Hospital during January this year)

And now that these beds have gone, there hasn’t been a sudden, miraculous drop in the need for them. Instead, we have seen a massive increase in the number of private beds being used to deal with demand. Up to half of all private mental health beds in Britain are now used by the NHS.

We’ve also started hearing stories about mentally-ill people having to sleep in police cells, for example, because there are no beds to admit them.

Instead of keeping beds, we have schemes such as the one proposed this week, with one hospital trust announcing plans to adopt an Airbnb system whereby members of the public with a spare room would be paid £1,000 a month to put up patients and provide three microwave meals a day and drinks.

On the face of it, you can see some logic in this. Patients who are well enough to be discharged, but can’t be because there’s no one at home to cook for them and see to their basic needs, are taking up beds and preventing new patients being admitted.

But I fear it would be the thin edge of the wedge, where more seriously-ill patients would end up in someone’s home — and just think if something were to go wrong.

Sometimes patients need to be in hospital and can’t just be shoved onto a put-up bed in someone’s spare room next to the Christmas tree decorations and old photo albums.

Imagine if that was your granny. There’s been such a backlash, the proposals have been kicked into the long grass. My question is: how could NHS bosses not have seen that coming?

Listen to any big-wig in the NHS and you’ll hear the same mantra repeated again and again: the NHS needs fewer beds, this belief runs like a cancer

It reminds me of the proposal to train receptionists to triage calls and decide whether patients should see a doctor or not. It’s ridiculous and insulting cost-cutting that anyone with half a brain cell could spot the flaws in.

Too often these schemes are really just window-dressing and a way of avoiding the real issue. They reveal just how out of touch NHS bosses are with most of the population — the people who actually use the health service.

High up in the NHS food chain there is a generally complacent and disingenuous view of patients. Ministers and managers, who are concerned only about budgets and targets, seem to be viewing the actual users of the NHS — the patients — as tedious, demanding annoyances, spoiling a perfectly good bar-graph and leaching money from the coffers.

If only they could get rid of patients, how efficiently the NHS would be run.

Managers are too busy number-crunching. They don’t look up from their clipboards long enough to see that, because of their decisions, the service that people have paid for is failing them.

A genius idea to stop superbugs

We all know that something has to be done about the impending crisis of antibiotic resistance.

If we do nothing, then in just a few years the antibiotics we now use will no longer work — and we’ll be faced with a nightmare situation in which a simple scratch could end up killing you.

This week, Public Health England launched a major campaign, Keep Antibiotics Working, to address this and to educate the public about the risks of overusing antibiotics.

As well as adverts warning of the danger, it has enlisted the help of psychology in what I think is a very clever move. 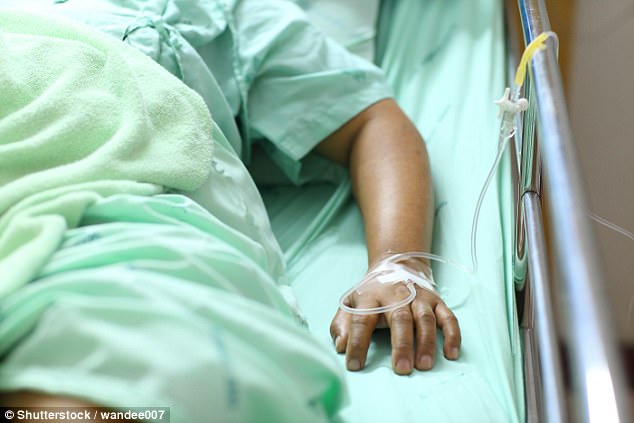 Patients want to do the right thing. However, they also want to feel they’ve been listened to by their doctor and that their concerns have been addressed.

The problem is that in many patients’ minds, the evidence of this is walking out of the surgery clutching a prescription. If they leave without one, many people feel short-changed.

As part of the new campaign, Public Health England has worked out a way of getting round this, with ‘Treating your infection’ prescription pads for GPs to fill in.

The sheet explains how long to expect the symptoms to last, and what the doctor recommends you do to manage the symptoms.

It’s personalised for the patient, and includes a back-up antibiotic prescription that can be collected after a period of time set by the doctor if the symptoms don’t improve. Genius.

Trials of this have been overwhelmingly positive. At one of the surgeries, patients say it has meant the doctor spends longer listening to them, rather than wasting time explaining why they aren’t going to prescribe antibiotics.

If we’re to keep antibiotics working for the next generation, this is precisely the lateral thinking that is required.

Work can be best thing for depression

There’s no doubt that public understanding about mental health is growing. Sure, there’s still stigma, but by and large over the past few years the general public has become more sensitive about it.

However, there’s a lag in how employers respond to it.

While it’s all very well telling people it’s good to talk and encouraging them not to suffer in silence with depression, for instance, that’s not much good if those in work aren’t given the support they need to receive help. 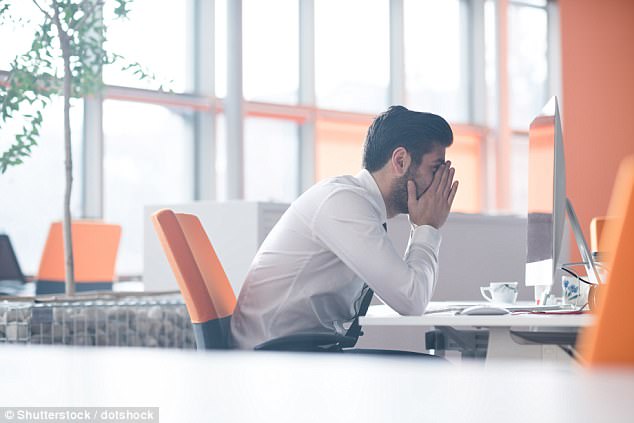 We know that being in work is the best thing for the majority of those with a mental illness. It provides structure, purpose and routine (file photo)

It might surprise you to know that I spend a good proportion of my working week not actually delivering treatment to my patients, but talking to their bosses about allowing them time off to go to their appointments.

The problem with mental health is that it’s not like many other conditions that require either a couple of outpatient appointments a year or a one-off operation with a week or so to recuperate. It takes time and a commitment to attend regular appointments, often once or twice a week for months.

With varying success, I threaten, plead and cajole bosses into giving my patients time off to attend psychotherapy, outpatient appointments and other commitments. But if they refuse, the patient has to go on long-term sick leave or resign and apply for benefits.

This is ridiculous. We know that being in work is the best thing for the majority of those with a mental illness. It provides structure, purpose and routine.

It’s also better for employers. Far better to keep an experienced member of staff and make concessions than to have to recruit and train someone else.

This week, a report co-authored by Paul Farm, the chief executive of the charity Mind, and backed by Theresa May, found that around 300,000 people a year lose their jobs due to mental ill-health, at a cost — through lost productivity — of around £99 billion.

Sadly, my experiences chime with its findings: that mental illness is still a taboo subject for employers. The report proposes that companies allow flexible working for these employees. It seems so simple — and so right.

A truly horrific statistic emerged this week: one in five children will be obese when they leave primary school, and another third overweight.

Evidence suggests that if someone was overweight as a child, they’re unlikely to be a normal weight as an adult. They’re condemned to a life of obesity — with all the associated ill health.

There is only one place to point the finger of blame: at parents. Given the health implications of obesity, this strikes me as nothing less than child abuse. What I find bizarre is that if a child is severely underweight, social services are all over the family like a rash. Why are we so blasé when it’s obesity?