NHS could SCRAP its 18-week surgery waiting target even though 4.42MILLION people are on the list

NHS could SCRAP its 18-week surgery waiting target even though a record 4.42MILLION people are on the list

The NHS could scrap its 18-week surgery waiting target even though a record 4.4million people are on the waiting list.

Hospital bosses said they ‘expect’ a new 8.5-week wait to be introduced instead, documents suggest.

Twelve hospitals are trialling the watered down targets, but NHS England said no final decisions had been made at all.

Current targets say no patient should wait any more than 18 weeks for treatment from the day a referral is made.

But these targets are largely not being met. Waiting lists for routine operations such as hip replacements are already at an all-time high, experts have warned.

The NHS could scrap its 18-week surgery waiting target for an 8.5-week target even though a record 4.4million people are on the waiting list 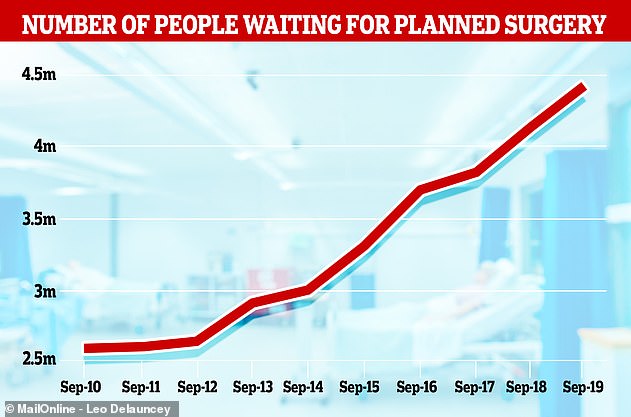 More than 4.41million patients are stuck on waiting lists in England

The four-hour A&E target wait may also be axed and replaced with a new one which gets critically ill patients seen within an hour.

A review found that only a tiny minority were benefiting from the new change, with seven in 10 A&E patients waiting even longer to be seen than normal.

The Health Service Journal (HSJ) reported that one of the 12 trusts taking part in the trial set out its expectations in a report.

Seven in 10 A&E patients are waiting longer under a new scheme being trialled by the NHS.

Health chiefs have been taking steps to scrap the infamous four-hour wait target to replace it with a new one which gets critically ill patients seen within an hour.

But a review has found that only a tiny minority were benefiting from the new change, which is being trialled at 14 hospitals in England.

It revealed that seven out of 10 A&E patients were forced to wait for nine minutes longer than they had been under the previous four-hour rules.

The average wait time for outpatients in departments using the new system rose to three hours and 10 minutes.

The NHS England report also showed waiting times fell for just a third of the A&E patients who ended up being admitted to hospital, by an average of three minutes to 5 hours 12 minutes.

The report, discussed at a Northampton General Hospital Trust board meeting, said: ‘The target average wait (mean) is expected to be 8.5 weeks from referral although this has not yet been set.’

Dr Rob Findlay, director of the software company Gooroo and a specialist in NHS planning, scheduling and wait times, analysed the impact of the potential new targets.

He said: ‘This is probably a relaxation compared with the current 18-week target, and the Government should take flak for lowering standards (if such a target is introduced).’

NHS data published earlier this month showed that in September, 84.8 per cent of patients started treatment within 18 weeks against the target of 92 per cent.

More than 4.4million patients are currently on the NHS waiting list for treatment – the highest-ever level. 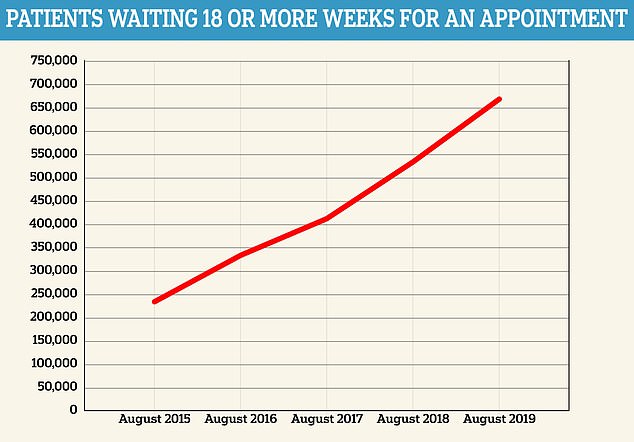 More than 662,000 people have waited more than 18 weeks for routine but important treatments – more than double the number in 2015

And the number of patients that are waiting more than 18 weeks to start planned treatment was 620,454 in July this year – the highest in a decade.

The Nuffield Trust warned changing to an average wait could be viewed with scepticism by patients.

Research analyst, Jessica Morris, said: ‘There is going to be a challenging PR exercise here if this is introduced.

‘Patients tend to care about how long they are going to wait, not how long everyone else in the queue has been waiting.

‘We will want to see it rigorously tested, and the results, before a decision is made.’

NHS England told HSJ in a statement: ‘Testing and engagement with clinicians and patients on the best measures of short waits for routine care is ongoing, and it is completely untrue to claim that any decisions whatsoever have been made on any particular measure, including a mean wait.’

The final recommendations will not be made until March next year.