NHS data reveals parts of Leeds, London and Manchester still have only fully-jabbed HALF of over-50s

Nearly half of over-50s still haven’t been fully vaccinated against the coronavirus in parts of England, according to official statistics.

MailOnline can reveal there are around 2.4million people in the most vulnerable age bracket who have yet to have both doses.

And approximately 1.9million have still to come forward for their first jab, despite being eligible since March. Uptake rates for the initial vaccine sit at just 59 per cent in the areas lagging most behind.

Experts warned the disparity in vaccine uptake between areas risks causing a ‘perfect storm’ that could threaten hospitals this winter, amid fears of a severe flu outbreak coinciding with the pandemic and an NHS drive to tackle the record-high backlog.

Under the plan, which No10 hopes will avert the need to impose any more lockdowns this winter, vulnerable adults will be eligible six months after having had their first vaccine. Other measures, such as face masks, work from home guidance and vaccine passports, will be brought back if Covid threatens to overwhelm the health service.

MailOnline analysis earlier this week suggested there are only around 1.6million people across the whole of Britain who currently meet the criteria, and that millions won’t be invited until closer to Christmas. 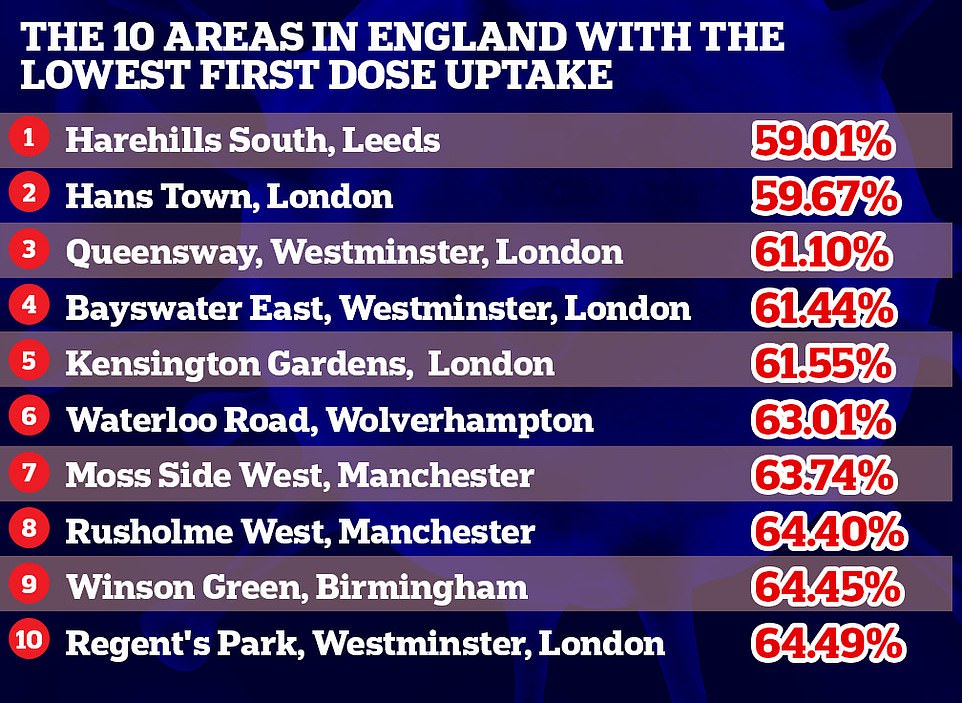 Among the 10 areas with the lowest first dose uptake, five are in London, two are in Manchester, while the others are in Leeds, Wolverhampton and Birmingham, according to the latest NHS weekly vaccination data. 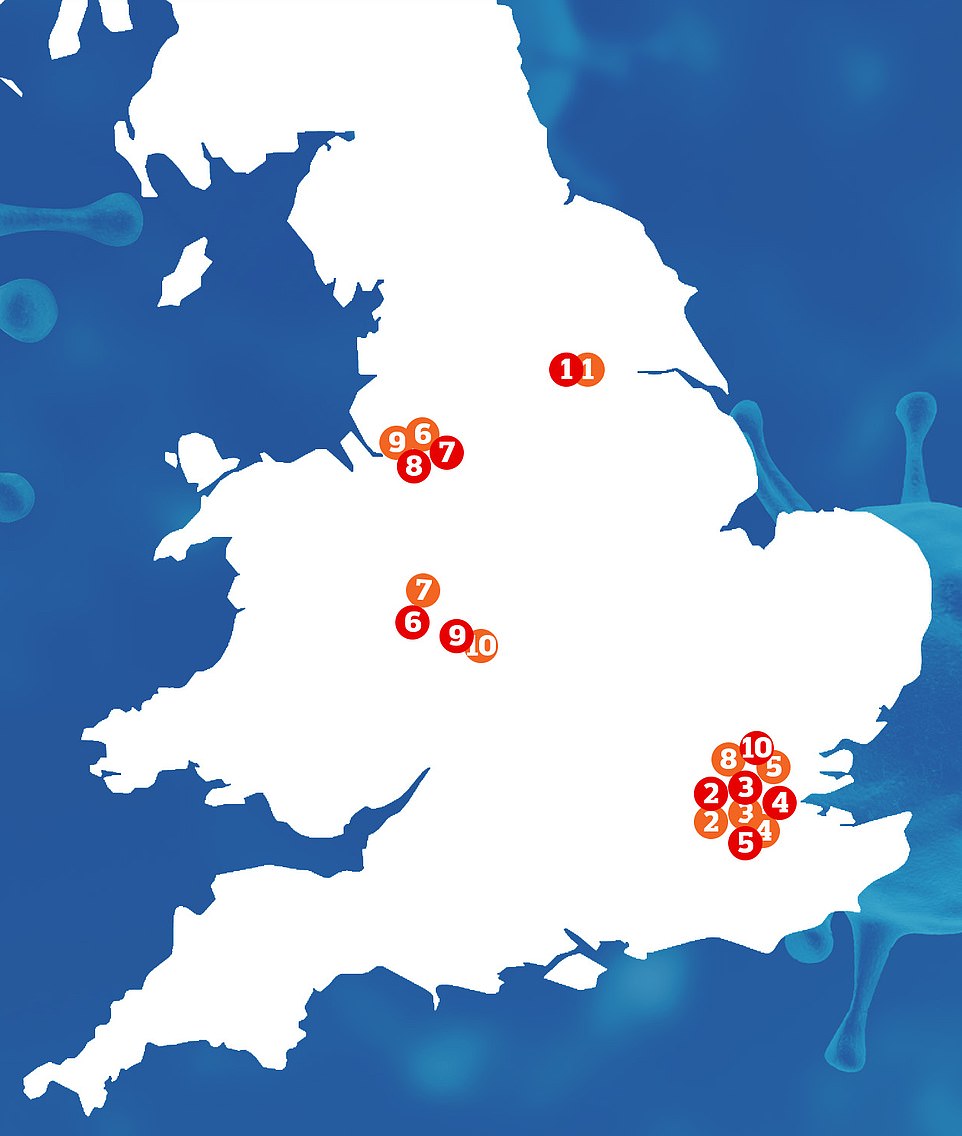 The areas in England with the lowest first (red) and second (orange) Covid vaccine uptake among the over-50s are clustered in Leeds, London, Manchester and Wolverhampton

The new examination of data revolves around NHS England figures on uptake for first and second doses, painting a clearer picture on how well the roll-out has gone.

And the roll-out has prevented 24million Covid cases and 112,000 deaths, according to official estimates.

But uptake among over-50s, who are most vulnerable to the disease and have been prioritised since the campaign began in December, in parts of England is lagging massively behind.

Parts of London, Manchester and Birmingham are also faring badly, according to the most up-to-date NHS weekly vaccination data that goes up until September 12.

Meanwhile, the highest vaccine coverage for over-50s is in Morpeth South and West in Northumberland (96.9 per cent), Garforth East in Leeds (96.6 per cent) and Eccleston in St Helens (96.6 per cent). 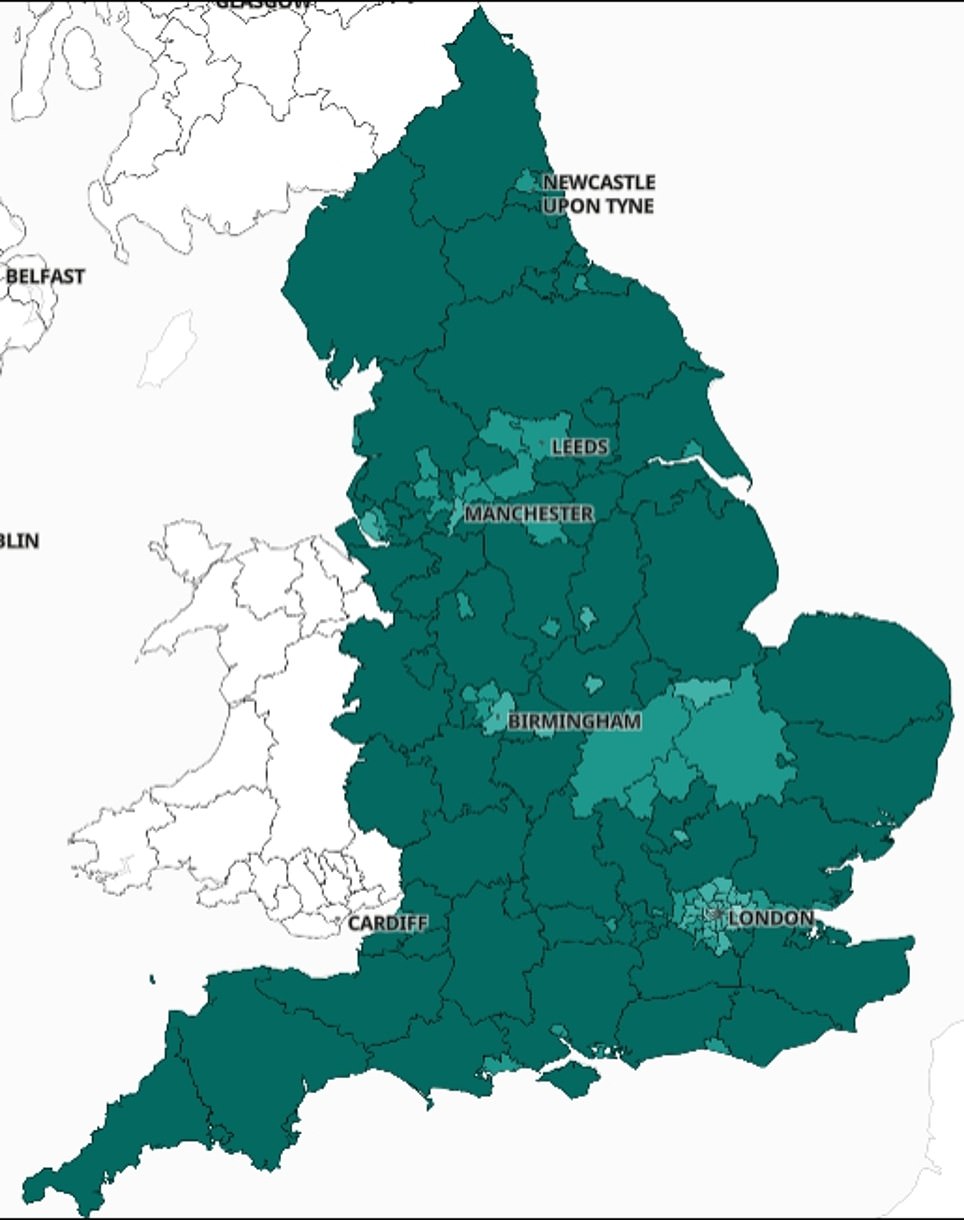 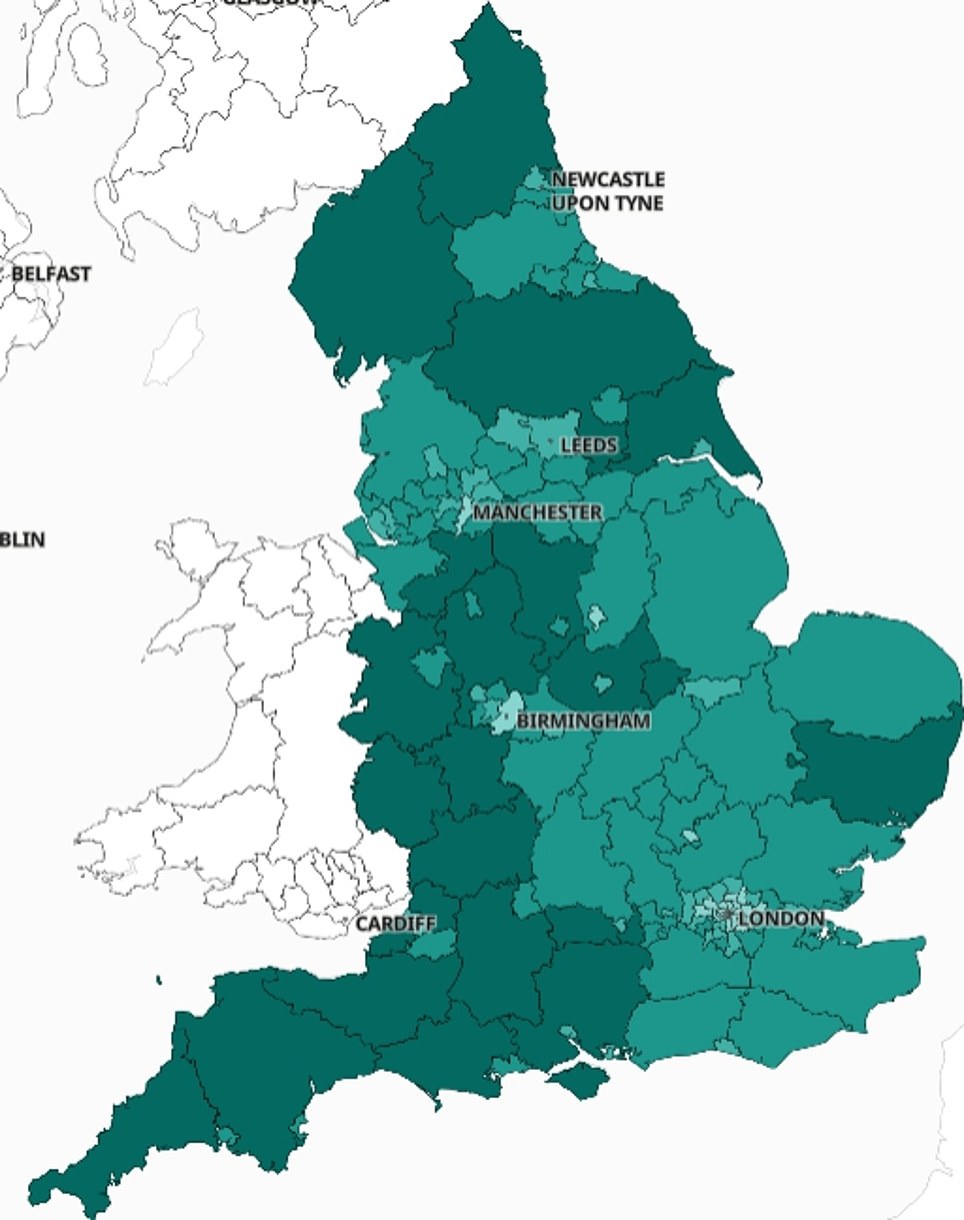 As it stands, 48.5million over-16s in the UK have received their first vaccine (left), while 44.2million are fully immunised (right). And the jabs have prevented 24million Covid cases and 112,000 deaths, according to official estimates 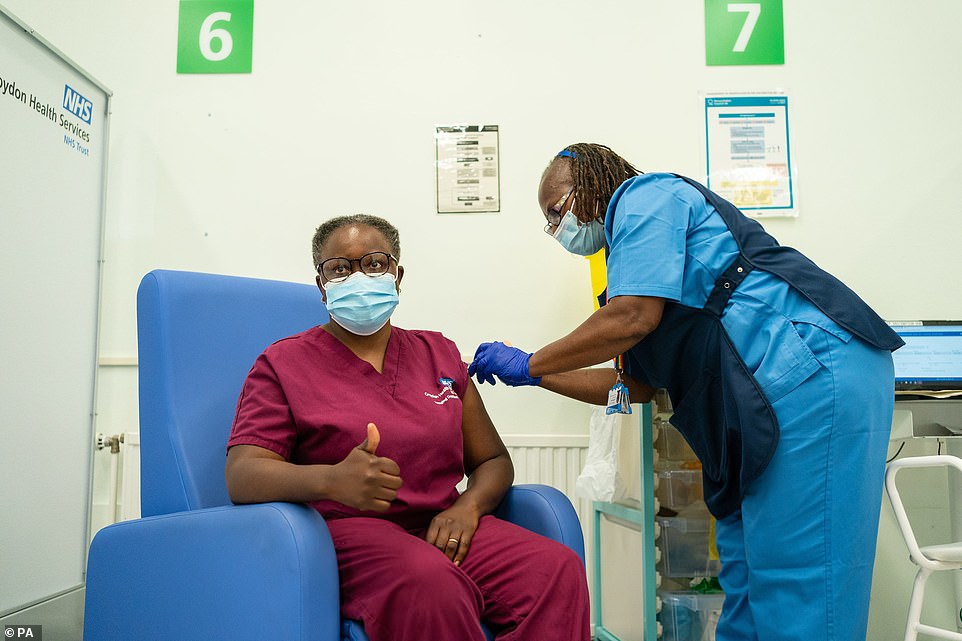 The booster rollout began this week, with some of the first going to NHS staff at Croydon University Hospital in south London 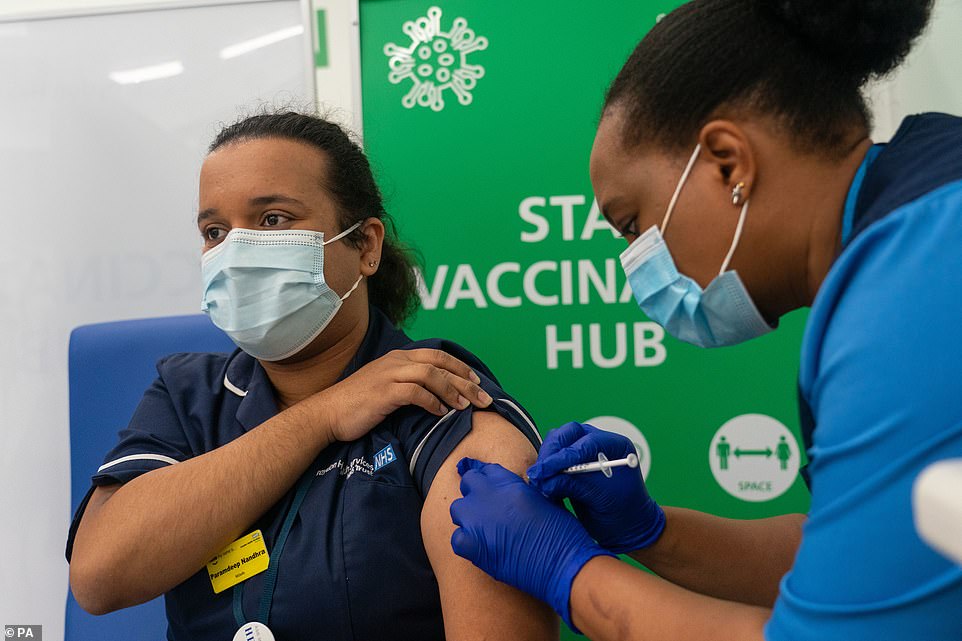 NHS staff were some of the first to be given the vaccine earlier this year and most are now eligible for booster doses . Pictured: Healthcare staff at Croydon University Hospital in south London getting a booster jab yesterday

It comes after No10 this week accepted advice from the Joint Committee on Vaccination and Immunisation (JCVI) to give booster doses to all over-50s, health and social care workers and those most vulnerable to the virus.

Booster doses of the Pfizer jab, or a half dose of Moderna, will be administered to those eligible from next week, regardless of which jab they initially received.

For those who cannot get either of those two mRNA jabs, such as due to an allergy, they will be given a dose of AstraZeneca’s vaccine.

The jabs will be dished out through vaccination centres, primary care networks and pharmacies and can be given at the same time as annual flu jabs.

A QUARTER of ‘Covid inpatients’ in England are primarily being treated for a different illness or injury, official data shows

Nearly a quarter of Covid inpatients in England are actually in hospital for a different reason, according to official figures.

Health service statistics show there were 6,146 NHS beds taken up by people who were coronavirus positive on September 14, the latest date data is available for.

But just 4,721 patients (77 per cent) were primarily being treated for the virus, with the remaining 1,425 receiving care for other illnesses or injuries. They could include patients who’ve had a fall or even new mothers who tested positive after giving birth.

In NHS hospitals in the Midlands, around a third of Covid patients were mainly being treated for another reason on September 14.

Separate NHS figures suggest as many as half of daily hospitalisations only test positive after being admitted for a separate condition.

Hospital numbers have become the key metric for ministers and their scientific advisers, now that vaccines have taken the emphasis away from infection numbers.

Boris Johnson has said lockdown curbs may have to be reintroduced if Covid hospital numbers rise sharply as part of his winter blueprint to tackle the virus, which could see masks and working from home mandated again.

But he did not put a firm figure on the threshold that would trigger the return of restrictions when he announced the contingency plans earlier this week.

The latest figures suggest the standard Covid hospital numbers have become a less reliable way of gauging the outbreak and NHS pressure.

The decision on boosters comes as the NHS is expected to face a challenging winter, as people have low levels of immunity to flu and other respiratory viruses which they did not catch last year due to Covid restrictions like social distancing.

Department of Health bosses claimed the booster campaign will ‘ensure the protection vaccines provide for those most at risk of severe illness from Covid will be maintained over the winter months’.

It is the first phase of the Government’s winter plan to avoid another lockdown. If hospital admissions rise quickly, ministers have warned they could be forced to reintroduce face masks and work from home guidance.

Earlier this month, half a million severely immunosuppressed people, who are most at-risk from Covid and were unable to mount a full response to the vaccine, were invited to get a third dose.

The JCVI said third doses should be given to them at least eight weeks after the second dose ‘as a guide’ but the decision on the timing should be made by their doctor.

The decision to offer people with a weak immune system an extra dose was made after a study found they tended to have lower antibody levels, suggesting they had a weaker response to the jabs.

Dr Simon Kolstoe, a senior lecturer in evidence based healthcare at the University of Portsmouth, told MailOnline: ‘The low uptake of vaccines in some areas is concerning given that recent data from the US shows that vaccinated people are five times less likely to be infected and then even if infected, ten times less likely to be admitted to hospital, compared to those who have not received their Covid vaccination.

‘This will clearly affect how busy local hospitals are, causing regional disparities in the availability of care.

‘With the likelihood of flu and respiratory syncytial virus infections also rising this winter, continued low vaccination uptake risks causing a perfect storm for some areas of the country.

‘We are already seeing the Army called in to help the ambulance service in Scotland, for instance.’

‘This means understanding what choices people typically make, and how well they are able to access health services – both advice and medicines.

‘What is especially problematic is that if there is a community with low vaccination levels, this very community may be more vulnerable to outbreaks- with knock-on effects on local NHS services.’

Professor James Naismith, a structural biologist at the University of Oxford, told MailOnline: ‘I think we need to see more imaginative efforts to reach the vaccine hesitant.

‘The unvaccinated will almost certainly get Covid at some point.

‘Depending on their age, the vast majority will fully recover. However, a small number of unvaccinated people will have a very serious illness.

‘To give people a measure, being unvaccinated and over 50 with Covid is like rolling two dice. If you roll a double 6, you get seriously ill. The older you are the more times you have to throw the dice.

‘Reaching the vaccine hesitant will save lives. The unvaccinated tend to be disproportionately from more deprived communities and some minority ethnic backgrounds.’