NHS finally agrees a deal with pharmaceutical giant for a £450,000 ‘wonder drug’

The NHS will fund the ground-breaking drug Spinraza, it has announced in a victory for children with a rare genetic condition.

Spinraza, lauded as a ‘wonder drug’ and priced at £450,000 for a patient’s first year’s supply, has been approved after a negotiating deadlock which lasted 17 months.

Now the life-changing medication will be made available to children, young people and adults who have spinal muscular atrophy (SMA).

NHS England made the announcement today after more than a year of back-and-forth with the drug manufacturer, Biogen.

One expert said the development could be a ‘silver bullet’ for many children who have run out of options in their fight against the crippling illness.

Finley Newell, five, was first diagnosed with spinal muscular atrophy when he was one and it has left him too weak to walk or swallow food on his own

‘Children already receiving treatment are reaching milestones never thought possible and living longer, and now hundreds of others will be given that same chance.

‘This would not have been possible without the support and hard work of clinicians, SMA charities, MPs and, above all, families and people with the condition.’

Families have led passionate campaigns to get access to the drug nusinersen, marketed as Spinraza, which is already available in Scotland.

Now the between 600 and 1,200 people with SMA in England and Wales will soon be able to get it, too.

The condition is present from birth and prevents the body creating sufficient proteins to protect nerves which are vital for movement, meaning they are damaged.

This nerve damage leaves children with weak and floppy limbs.

SMA can cause lifelong disability or, in its most severe forms, such severe muscle weakness that children eventually lose the ability to breathe and they die.

Spinraza works by attaching itself to the gene which is causing the nerve and muscle damage and effectively repairing it so the body is sent the correct signal by DNA.

As a result the body makes more of the protein needed to build nerve cells, which protects the nerves, allowing muscles to work properly and grow stronger.

‘WE DON’T KNOW IF THIS WILL BE FATAL’: FAMILY LIVE DAY-TO-DAY WITH SON’S CONDITION

The parents of five-year-old Finley Newell last year urged health bosses to approve Spinraza so their son could be treated with it.

Finley Newell, from Haddenham in Buckinghamshire, was born with spinal muscular atrophy severe enough that he can’t walk and a common cold could be enough to kill him.

The condition means the schoolboy is unable to swallow food and struggles to breathe by himself, causing regular near-death experiences. 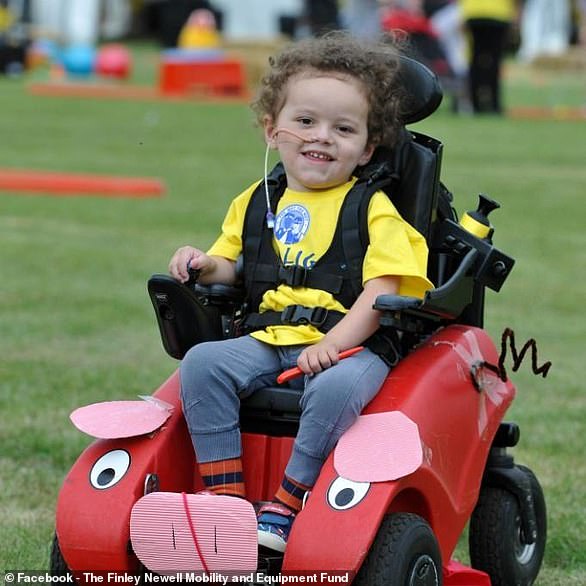 Finley’s parents Rosie Davies and Joel Newell said in October they were in limbo waiting for the NHS’s drugs regulator to change its mind about the drug Spinraza, which could give their son a new lease on life

Finley’s mother, Rosie Davies, 37, said it was ‘an abomination’ that children in England could not be prescribed the vital medication – but those in Scotland can.

‘We are just waiting for NICE to change their mind,’ Ms Davies said in October. ‘We live day-by-day and just don’t know what the future holds for our son.

‘We hope it won’t be fatal but we don’t know.

‘And there’s nothing more we can do except keep fighting for some sense of normality in our lives and hope there is some kind of access arranged for the drug.

‘I want him to go to school – he misses his friends and he’s just a normal five-year-old when he’s healthy. He’s a sociable child and he loves football.’ 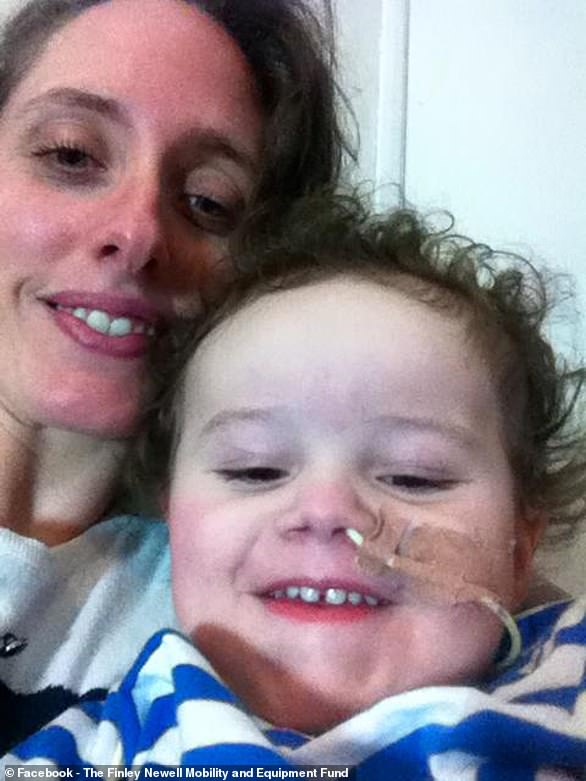 Finley’s mother, Rosie Davies (pictured) said it is ‘incredibly cruel’ to deny children a drug which is already known to help with the condition and can be prescribed in the US, Europe and Scotland

At the time Finley was being fed through a tube because his swallow reflex was too weak, and if he had a cold his lungs were too weak to cough up mucous, which would then build up in his lungs.

He had been admitted to intensive care nine times since he turned two, and relied on a non-invasive ventilator – a breathing mask – at night.

Children with spinal muscular atrophy will now be able to access Spinraza on the NHS, potentially offering hope to hundreds of families like Finley’s.

For months NICE had balked at the cost of Spinraza, saying after a meetinglast year it wouldn’t approve the medicine unless the price dropped.

But manufacturer Biogen refused to budge on the cost. Now the parties have come to an agreement – though it isn’t known who backed down.

NICE spokesman Meindert Boysen said: ”The committee has recognised that Spinraza is a promising treatment that has been shown to improve a range of outcomes important to patients.’

He added: ‘Today’s announcement shows that, where companies show appropriate flexibility, it is possible to find a way to provide important treatments to patients in a way that is cost effective for the NHS and taxpayers.’

Spinal muscular atrophy robs people of their physical strength by affecting motor nerve cells in the spinal cord, taking away the ability to walk, eat or breathe unaided.

It is caused by a genetic mutation in the survival motor neuron gene 1 (SMN1).

In a healthy person, this gene produces a protein which forms a protective outer layer around the nerves which control our muscles.

Without it, those nerves don’t function properly and eventually die, which causes debilitating and often fatal muscle weakness.

Spinal Muscular Atrophy affects approximately one in 11,000 babies and is a leading cause of death in infants. On average, one in every 50 Americans is a genetic carrier. It can affect any race or gender.

There are four types of the condition ¶ types I, II, III, and IV – which are based on age of onset and highest physical milestone achieved.

Individuals with SMA have difficulty performing the basic functions of life, like breathing and swallowing.

However, SMA does not affect a person’s ability to think, learn, and build relationships with others.

Professor Francesco Muntoni, a paediatric neurologist at Great Ormond Street Hospital in London, told MailOnline: ‘We are delighted with this long awaited decision.

‘Great Ormond Street Hospital played a significant role in a highly successful multi-centre global trial which saw striking results where the drug delivered visible improvements in motor and respiratory outcomes of our patients.

‘For many children with SMA, this treatment could be the silver bullet, offering children and families affected by this devastating condition, a therapy that could increase their survival when there has otherwise been no other option.’

Spinraza is already used in the US, where it has been shown to improve survival of the most severely affected babies and to improve the strength of older children.

Now people across the UK will be able to access the same treatment, which won a $3million (£2.29m) science breakthrough prize last year.

‘At last the SMA community has the answer it has been asking for,’ said Doug Henderson, managing director of the charity Spinal Muscular Atrophy UK.

‘We are only sorry that it took so long when time matters so much; for the families with infants with SMA Type 1 who have had no access to treatment since November 2018; for families and adults who have desperately wanted to have the opportunity to see what potential this treatment might have for them; for the clinicians who have been so frustrated by their lack of power to offer it.’

The drug will be offered to patients through a managed access arrangment.

This means people who qualify will be able to get it on prescription while experts gather more evidence showing how well it works.

NHS England’s chief executive, Simon Stevens added: ‘This promising treatment has the potential to be life changing for children and their families.

‘The NHS has now reached one of the most comprehensive deals in the world, which allows us to assess real-world evidence of its long term benefits.’