Return of the mask! NHS hospitals ban visitors and bring back mask mandates due to wave of winter bugs

Two NHS hospitals have banned most visitors and instructed patients to wear masks on its wards after being ravaged by a swath of winter bugs as well as Covid.

But one Tory MP today called the trusts’ decision to ‘lock’ patients away from their loved ones ‘wrong and cruel’.

However, hospital bosses say the move is needed to protect vulnerable patients on the wards from a ‘significant increase’ in Covid, flu, RSV, and norovirus infections. 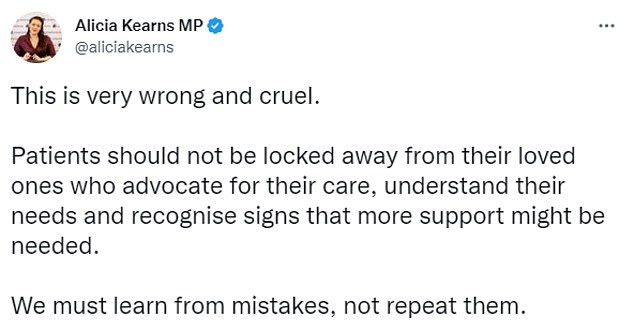 Could China’s Covid outbreak really push the fight against the virus back to square one?

China’s mammoth Covid outbreak provides an ‘ideal environment’ for a mutant variant to develop that is more infectious and render vaccines less effective, experts have warned.

A surge in infections is sweeping the country after Beijing ditched its zero-Covid policy earlier this month, which had seen draconian lockdowns, extensive testing and isolation for cases and contacts imposed for nearly three years.

The country, which last week announced that it would not longer report daily Covid data, is thought to be seeing one million cases and 5,000 deaths per day, according to some estimates. Hospitals have been overwhelmed and morgues have filled up.

Experts told MailOnline that the situation presents the perfect breeding ground for ‘troublesome’ new variants to emerge that could spread more easily and evade immunity.

However, others noted that a new variant is ‘no more likely to emerge in China than anywhere else’ and the majority of Brits have already been infected with Omicron, which is the dominant strain in the country.

They added that they also need to keep staff from becoming infected by unwell visitors, which could lead to much-needed medics taking sick leave.

But Alicia Kearns, the Conservative MP for Rutland and Melton, slammed the decision.

Writing on Twitter she said: ‘This is very wrong and cruel.

‘Patients should not be locked away from their loved ones who advocate for their care, understand their needs and recognise signs that more support might be needed.’

Referencing how similar visitor bans were enacted during the Covid lockdown she added: ‘We must learn from mistakes, not repeat them.’

Announcing the new rules, which came into effect today, hospital bosses said all visiting to adult inpatient wards would be banned except for compassionate reasons.

Pregnant women and children in care would automatically apply for compassionate visiting, but other patients would be treated on a case-by-case basis.

The Trust said ‘virtual visiting’, for example using an iPad or tablet camera, would be increased so that patients could still stay in regular contact with their loved ones.

Any visitors who are allowed into the hospitals, and all patients, would be asked to wear masks to help reduce the spread of Covid and winter viruses like the flu.

They also said another 70 beds were taken up by flu patients with the seasonal winter virus having inundated the NHS nationally over the past few weeks.

In a joint statement Northampton and Kettering General Hospital’s chief operating officers, Palmer Winstanley and Fay Gordon, said winter pressures said the decision to impose the new rules had not been made lightly.

They said: ‘The UK is now experiencing a significant spike in winter illnesses including COVID, flu, RSV and norovirus.

‘The current variants are very infectious, and we are seeing numbers rise in both hospitals with some patients being very unwell.

‘As a result, we are suspending visiting on adult inpatient wards and are asking all patients and visitors to wear masks when coming to the hospital.

‘It is not a decision we take lightly, and we hope people understand why we are reintroducing these measures for the safety of our patients’.

Could China’s Covid outbreak really push the fight against the virus back to square one? Experts warn new worrying variants could spring up but immunity should keep severe illness at bay

A&E patients forced to wait 15 hours ON AVERAGE in parts of England as hospitals blame flu, Covid and a lack of beds for ‘unprecedented’ pressure