The number of patients enduring the humiliation of mixed-sex wards has hit a seven-year high.

More than 2,250 patients were placed on the wards last month, the worst recorded figure since March 2011. Nearly 13,700 people slept on the wards in the past year.

Ministers promised to end the so-called ‘wards of shame’ in 2010 following a Daily Mail campaign to expose their indignity.

More than 2,250 patients were placed on mixed-sex wards over the winter crisis, the wards are also known as ‘wards of shame’ (FILE photo)

But hospitals have become so overcrowded, they say it is impossible to stick to the pledge.

NHS England figures show there were 2,278 ‘mixed sex breaches’ last month, three times as many as in February 2017. A breach counts as any occasion when a patient is placed on a ward with the opposite sex, not including intensive care, high dependency units or A&E.

Labour health spokesman Jonathan Ashworth said: ‘These breaches are a stark indicator of patient care worsening under the Tories. Patients expect dignity and respect when they’re being treated in hospital, but instead they’re being left denigrated on mixed-sex wards.’

He added: ‘We need a full inquiry into the Government’s mishandling of the NHS this winter.’ Successive governments have been promising to eradicate mixed-sex wards for more than 20 years.

Many patients find the wards dehumanising. They often have to share toilets or bathrooms with the opposite sex wearing little more than hospital gowns or night clothes.

The hospital with the highest number of breaches in February was Dartford and Gravesham NHS Trust in Kent with 582.

There were 408 at the Royal Berkshire NHS Trust in Reading and 234 at the Northampton General Hospital. 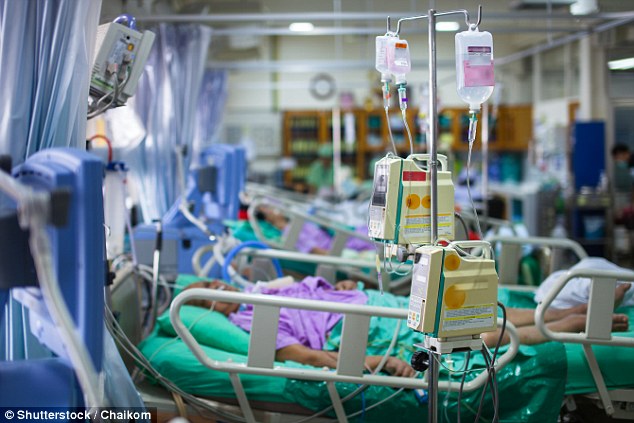 Sarah Scobie, of the Nuffield Trust think-tank, said: ‘Hospitals have increasingly had to rely on workarounds – from cancelling planned operations to using mixed-sex accommodation – to ensure they treat growing numbers of sick and very often frail patients in as safe and timely a manner as possible. This has meant that years of progress in driving down the rates of mixed-sex breaches are at risk.’

‘These breaches reflect the difficulties trusts and frontline staff face in providing the quality of care patients deserve. Trusts have worked hard over many years to eliminate this problem. It is disappointing to see those gains going into reverse.’

Ruth May, of NHS Improvement, the hospitals regulator, added: ‘NHS staff have been dealing with an increase in emergency admissions of 6.5 per cent compared to the same time last year.

‘Despite this increase and a significant spike in flu and norovirus cases, over two thirds of acute trusts reported zero mixed-sex breaches.’

It comes as a leading doctor warned that the ‘winter pressures’ in the NHS will not let up until Easter at the earliest. Society of Acute Medicine president Dr Nick Scriven said hospitals had been battling a ‘perfect storm’ of cold weather, norovirus and flu.