NHS patients set to have access to breakthrough drug

Thousands of NHS patients with a genetic type of ovarian cancer will soon have access to a new treatment, hailed as a wonder drug, that slashes the risk of death from the condition by 70 per cent.

Experts describe the discovery of the pill, Olaparib, as ‘the biggest breakthrough in a decade’ for women diagnosed with the deadly genetic BRCA mutation.

Recent trials showed the cancer had not returned in two thirds of women studied, three years after receiving the new treatment. Even now, five years after the trial began, many patients who took Olaparib are still free from cancer.

By comparison, only a third of women given standard treatment – chemotherapy and surgery – were tumour-free after three years.

From next spring, patients diagnosed with BRCA-related ovarian cancer that has already spread can benefit from Olaparib for the first time, as part of a second medical trial at London’s Royal Marsden Hospital. And in May, health regulatory body NICE will decide if Olaparib will become a standard treatment for suitable NHS patients nationwide.

One in six ovarian cancers are caused by faulty genes such as BRCA1 and BRCA2 mutations, which prevent cells repairing damaged DNA, and can be identified via genetic testing.

On average, women have a two per cent chance of developing ovarian cancer in their lifetime. But this can increase to between ten and 60 per cent for those with BRCA mutations, depending upon the type.

Hollywood star Angelina Jolie famously opted for preventative surgery to remove her breasts and ovaries after discovering she had inherited the BRCA1 gene mutation from her late mother. 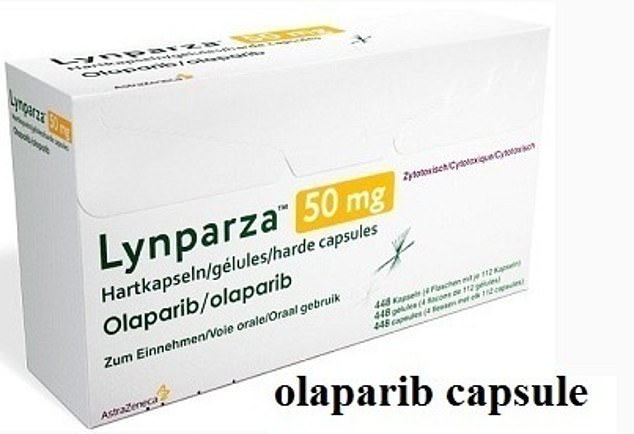 Genetic ovarian cancers are notoriously difficult to treat, with only 30 per cent of patients still alive five years after diagnosis. This is because by the time most are diagnosed, cancer has already spread to several areas of the body.

Chemotherapy is offered to kill the cancer cells, as well as surgery to remove tumours. However tumours are likely to re-occur and most patients relapse within 18 months of finishing treatment. Olaparib works particularly well in BRCA-related cancers, blocking an enzyme that helps to repair tumour DNA. This triggers the death of cancer cells.

Currently, Olaparib is available as a treatment of last resort for some ovarian cancer patients, when the cancer returns after other options have failed. At this point, it is usually incurable. But now it is being given to women at diagnosis, in conjunction with chemotherapy and surgery. 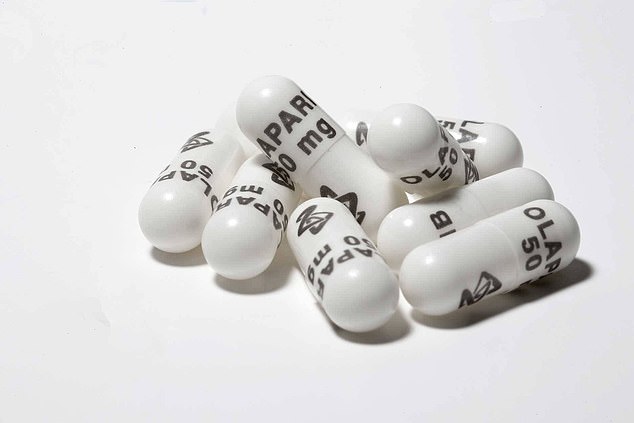 Lynparza Olaparib (pictured) could save thousands of people from ovarian cancer

‘The excitement about first option treatments is that there’s a potential, even in women with advanced disease, to achieve cure,’ says Dr Susana Banerjee, consultant medical oncologist at The Royal Marsden NHS Foundation Trust and co-author of the trial.

‘In the placebo arm of the trial, the median time before cancer re-occured was just over 13 months,’ she adds, ‘but in the Olaparib treated arm, we haven’t even reached that median point yet and there’s a 70 per cent improvement in the time before disease progression already.

‘Some women continued to be disease-free after they stopped taking the drug, suggesting they only need to take it for two years and it keeps on working.’ 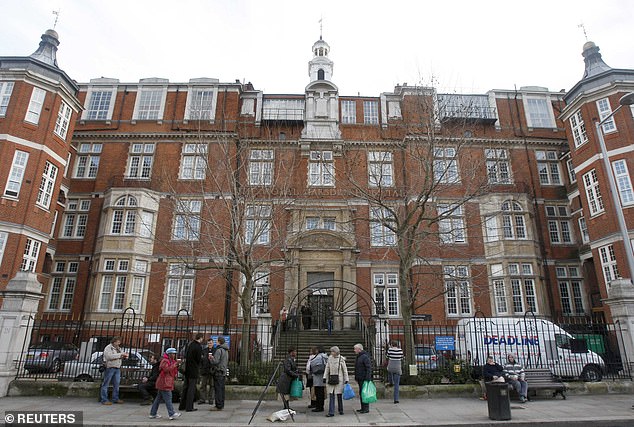 From next spring, patients diagnosed with BRCA-related ovarian cancer that has already spread can benefit from Olaparib for the first time, as part of a second medical trial at London’s Royal Marsden Hospital

Olaparib is part of a revolutionary family of drugs known as PARP inhibitors that have been shown to be effective for treating lung, prostate and some head and neck cancers.

One patient benefiting from the trial is 51-year-old Preeti Dudakia, a pharmacy technician diagnosed with stage three ovarian cancer in 2014. As she had previously suffered from fibroids and cysts, no connection was initially made between her symptoms – bloating, frequent urination and reduced appetite – and her late mother’s ovarian cancer.

‘I was told I’d need a total abdominal hysterectomy and chemotherapy. Everyone thought that I’d die within a year or two, like my mother,’ she recalls.

But Preeti’s oncologist also suggested a twice daily oral dose of Olaparib for two years, as part of the medical trial.

Preeti, from Surrey, tolerated the drug ‘quite well’ and was able to return to work during treatment. Side effects were limited to tiredness and anaemia, for which she needed blood transfusions.

Two years on, scans show Preeti to be cancer-free. ‘I’m well and getting on with my life,’ she says. ‘I’ve now got a future, which I wouldn’t have had without this drug.’

What is ovarian cancer and what are the symptoms of the ‘silent killer’?

Ovarian cancer affects more than 6,500 women in the UK each year.

It is the fifth most common cancer among women.

It is most common in women who have had the menopause but it can affect women of any age.

About 80 per cent of ovarian cancer cases are diagnosed in the advanced stages of the disease.

At the time of diagnosis, 60 per cent of ovarian cancers will have already spread to other parts of the body, bringing the five-year survival rate down to 30 per cent from 90 per cent in the earliest stage.

It’s diagnosed so late because of its location in the pelvis.

You have other symptoms of ovarian cancer that won’t go away – especially if you’re over 50 or have a family history of ovarian or breast cancer, as you may be at a higher risk