By Sophie Borland and Martin Beckford For The Daily Mail

Patients are facing devastating waits for cancer treatment and hip surgery because doctors are slashing their hours to avoid hefty pension bills.

A Mail investigation has revealed that one in five hospitals has admitted that waiting times are getting longer as a result of the dispute.

Three NHS trusts used recent board meetings to highlight how the crisis is delaying potentially life-saving surgery for cancer.

Pauline De Lane, 75, of Liverpool, had her hip surgery cancelled five times. She was left in an ‘awful state’ by the 11-month delay, said her husband Peter, 79. She eventually had a hip replacement last June

The British Medical Association confirmed that doctors were ‘scaling back their hours’ and warned that patients face ‘long and distressing waits’ as a result.

The crisis was triggered by changes to pension rules introduced by former chancellor George Osborne in 2016 which affect any earners on more than £110,000 a year.

A husband feared his wife would die when her hip surgery was cancelled five times.

He once ‘begged’ doctors not to send them home as ‘I feared she would die’.

She eventually had a hip replacement last June. Liverpool University Hospitals Trust denied the case was linked to the pensions row.

Consultants, who earn on average £127,000 annually, have been among the hardest-hit, with some specialist doctors and surgeons being stung by bills running into tens of thousands of pounds.

Many have reduced their working hours by refusing to do important clinics or theatre sessions at evenings and weekends, which are intended to clear waiting lists.

To identify the impact on patients, the Daily Mail audited board meeting papers for 147 hospital trusts.

We found that documents for 29 trusts stated that the pensions stand-off was leading to longer waits for routine operations, including hip and knee surgery.

Guy’s and St Thomas’ Trust in central London described the crisis as a ‘serious risk’ and said more patients were waiting a year or longer for some procedures.

Cambridge University Hospitals highlighted how a lack of consultants ‘willing to undertake’ overtime sessions meant they were struggling to clear the backlog of patients. 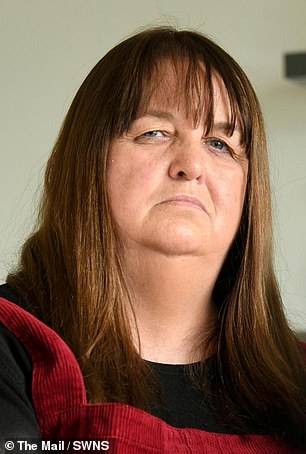 Angela Higgins, 60, is living with the agonising fear that she has cancer. Hospital bosses are trying to set a new date

Estimates from University Hospital Southampton show that up to 40 consultants had cut back on overtime sessions meant to help clear the backlog. Dr Vishal Sharma, of the doctors’ trade union the British Medical Association, said: ‘Doctors are scaling back their hours and will continue to do so if the pension crisis remains unaddressed.

‘This stark analysis lays bare the devastating effect this is having.

Patient Angela Higgins, 60, is living with the agonising fear that she has cancer after an operation to remove a stomach cyst was cancelled four times.

Mrs Higgins, of Barrow-in-Furness, Cumbria, said her mother died from stomach cancer two years ago and the delay has left her ‘terrified’.

Hospital bosses apologised and said there were not enough beds available but are trying to set a new date.

‘When the NHS is already under significant pressure, it is absurd that doctors are in a position where they are being forced to reduce the work they do for patients or decline extra hours to bring down waiting lists in order to prevent incurring severe financial penalties.’

In October, a Royal College of Surgeons survey showed that 69 per cent of consultant surgeons had reduced the amount of time they worked in the NHS as a result of the ‘pensions taper’.

Last week official figures revealed that the percentage of NHS patients undergoing routine procedures within the 18-week target is at its lowest since 2008.

Waits for cancer treatment are at their worst since records began in 2004 with one in four patients waiting longer than two months.

In November, NHS England tried to resolve the stand-off by promising to pay back the pension bills accrued by doctors doing overtime this financial year.

But individuals will not receive the money until they retire and the measure is only a short- term solution.

A Government spokesman said: ‘We are urgently reviewing the pensions annual allowance taper and NHS England has already taken action by introducing a special arrangement for 2019/20.’

What is the crisis about?

The row was triggered by pension tax changes introduced in April 2016.

Anyone earning more than £110,000 a year faces new limits on the amount they can put in their pot.

If they exceed their annual allowance, they are stung by tax bills.

Some doctors claim these demands have been so high that they have effectively paid for the right to do overtime.

What are the consequences?

Many consultants have cut back on overtime sessions – and in some cases even their normal working hours – to reduce the tax demands.

A survey by the doctors’ trade union, the British Medical Association, has found that 30 per cent of hospital doctors had reduced their work.

Worryingly, a further 40 per cent are also planning to do so.

How does this affect cancer and hip treatments?

Many consultants have stopped doing ‘waiting time initiative’ shifts at evenings and weekends.

These are extra clinics or theatre slots to clear patients on waiting lists.

If doctors do not work, waiting times go up across the board.

What is being done to sort this out?

Health Secretary Matt Hancock has launched a consultation on giving doctors more flexibility in how much they put in their annual allowance.

NHS England has pledged to repay extra bills to doctors doing overtime this financial year – but only when they retire.

How bad is the situation?

Plus there is a lack of beds, a shortage of nurses and high demand.

Experts say if the issue is not resolved, the NHS is going to be dangerously short of doctors.