Controversial plans to ban patients from attending crowded A&E departments to slash soaring waiting times are being considered by the NHS.

Experts have reacted in fury to the scheme, which will demand patients to seek a referral from their GP or 111 before they step foot through the doors.

She told delegates at a conference addressing the demand on the NHS of the unprecedented idea, and reiterated the claims to Pulse magazine, it reported.

Only patients who arrive by ambulance will be treated by time-stretched doctors, as others will have to wait until they get permission to visit hospital.

Critics of the ‘talk before you walk’ scheme are appalled by the proposed plan and have raised the prospect of bouncers on the doors of A&E departments in order to enforce it.

Others have asked if children will be turned away if they have broken their arm.

Sceptics have said the waiting times could be slashed through simpler means, such as recruiting more staff and keeping hold of much-needed beds.

Concerns have also been raised that thousands will ‘just call an ambulance’ to get a definite place in A&E, straining paramedics’ response times to emergencies.

The pilot plans, reportedly seen by Health Secretary Jeremy Hunt, are being touted as a way to avoid a crisis in the coming months, following the disastrous winter it endured last year.

But NHS England and the Department of Health have dismissed the reports, and insisted there are ‘absolutely no plans’ to introduce such measures.

Experts have reacted in fury to the scheme, which will demand patients to seek a referral from their GP or 111 before they step foot through the doors

Rachel Power, chief executive of the Patients Association, said: ‘NHS England are right to note that putting an absolute bar on walk-ups to A&E will be difficult.

‘Will the parent of a child who has fallen and broken their arm, for instance, really have to call 111 or get a GP referral first?

‘Are they even likely to know such a bar exists? Will there be bouncers on the door, turning people away?’

She told a conference: ‘Jeremy Hunt has mentioned to some of my colleagues, maybe we should have a “talk before you walk” and we may well pilot that.

‘I think it’s been done in other countries where they’ve actually said you can’t come into ED until you’ve talked on referral.’ 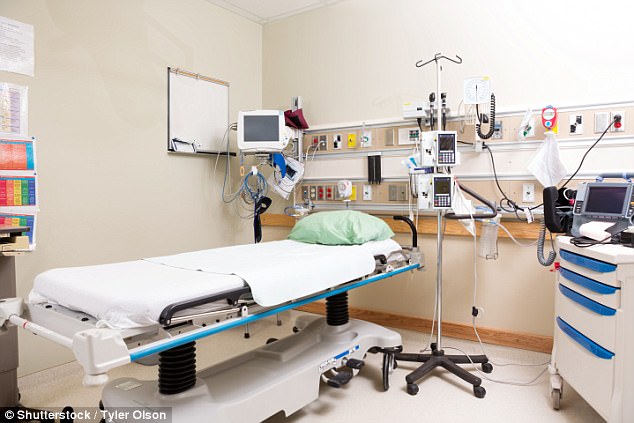 Pulse reports that she said ‘it’s going to be tricky’ to get the go ahead on the pilot plans, which would be tested in one area before officials decide to apply it wider.

She told delegates at the Urgent Health UK conference that only 20 per cent of patients have tried ringing NHS 111 before embarking on a journey to A&E.

Dr Thomas added: ‘So I think that other 80 – there is opportunity there. Some of them will need ED but there’s an awful lot that won’t.’

Dr Simon Abrams, chair of Urgent Health UK, dubbed the proposals as ‘interesting’ and said they could reduce waiting times in A&E which are the worst on record.

THE TWO-TIER SYSTEM IN A&E

Ambulance crews responding to 999 calls are asked to make an assessment at the scene to determine how life-threatening the situation is.

Patients who have suffered major trauma, such as head injuries, stab wounds or have been involved in a serious car crash, are rushed to specialist centres for treatment.

This often involves skipping a visit to a crowded A&E department at a local hospital, allowing the patient to immediately receive life-saving help.

Major trauma centres were introduced by the Conservative and Liberal Democrat coalition in 2012. Some 22 of them are scattered across England.

Previously, patients who suffered major trauma were simply taken to the nearest hospital, regardless of whether it had the skills, facilities or equipment to deal with such serious injuries.

This often meant patients could end up being transferred, causing delays in people receiving the right treatment.

He said: ‘It might reduce the workloads of A&E departments, which on the whole is staffed by very junior doctors.

‘If you can put a slightly more senior doctor over the telephone to that patient, maybe you can provide better care.’

Increasing demand and slashed funding has wreaked havoc on A&E departments, with many left over-crowded and unable to treat patients on time.

Shocking figures show that the number of patients languishing in A&E for more than 12 hours has risen by 10,000 per cent in five years.

Plans to cut the number of beds in A&E have been suggested, despite the Royal College of Emergency Medicine previously warning 5,000 extra are needed.

Overall waiting times this year have reached their worst levels since records began 15 years ago, according to figures.

More than 2.5million people had to wait for longer than the time target in English A&E units in 2016/17, with only 89.1 per cent of patients seen within four hours.

Commenting on the new plans, Dr Chaand Nagpaul, chair of the BMA, said: ‘Trying to solve a problem in one part of the NHS by shifting it onto another won’t work.

‘Pressure on emergency departments is down to seriously-ill patients and a lack of capacity and funding across the whole system.

‘All this proposed system would do is add an extra layer of bureaucracy for patients and an extra burden on the NHS, GPs, or other clinicians.

‘It could also have the added effect of increasing the burden on the ambulance service as people could instead just call an ambulance to get a place in A&E.’

A spokesperson for the Royal College of Emergency Medicine said they were ‘concerned’ by the plans to bar patients from attending A&E.

They added: ‘We believe the plans are at a very early stage but will be seeking representation in any talks around such a decision.

‘While these are merely proposals, instead of focusing on managing demand – all attempts at which have previously failed – NHS England should continue working to ensure that A&E departments are fully resourced with appropriate staff numbers and bed availability in order to treat patients in a safe and timely manner.’

‘The NHS is being pushed to the brink with underfunding so bad that Ministers are in secret discussions to ban sick or injured people from walking into A&Es. Patients deserve better and will want to know how will these new restrictions be policed.

‘Do ministers really expect sick patients to be turned away at the A&E door?’

Responding to the news, a Department of Health spokesperson denied the claims. They said: ‘There are absolutely no plans to pilot this approach.

‘Patients can be reassured that unprecedented planning has gone in to preparing the NHS for this winter, supported by an extra £100m for A&E departments and £2billion for the social care system.’

An NHS England spokesperson said: ‘It is wrong to suggest or imply that the NHS will do anything other than continue to provide A&E care for all patients who need it, nor are there any plans to prevent patients from visiting A&Es alongside the other options now available for non-urgent care such as NHS 111 or urgent treatment centres.’

THE NHS’ WORST EVER WINTER

The NHS has endured its worst ever winter crisis, with waiting times, cancelled operations and bed-blocking running at, or near, record levels, it was revealed in April.

Bed-blocking due to a lack of social care places is at a record high with more than 2,500 health patients prevented from leaving hospitals each day – specifically because there is nowhere for them to go.