NHS staff are set for average 6.5% rise over three years

Ministers have today finally drawn a line under the public sector pay cap today as a new NHS deal is unveiled.

Workers in the health service have been offered an average 6.5 per cent rise over three years, while the lowest paid could get up to 30 per cent.

The move marks the end of seven years of tough pay restraint as the Government fought to balance the books in the wake of the credit crunch.

The largest NHS trade unions today welcomed the deal, which came after months of intense negotiation, and said they would that it is accepted by their members.

Health Secretary Jeremy Hunt outlined the deal to Parliament, he said it ‘recognised the public appreciation for just how much they have done and continue to do’.

‘The agreement that NHS trade unions have reached is a something for something deal that brings in professional  changes like productivity in exchange for significant rises in pay.’

He added: ‘Rarely has a pay rise been so deserved for NHS staff who have never worked harder.’

Health Secretary Jeremy Hunt (pictured in Parliament today) today outlined the deal to Parliament, he said it ‘recognised the public appreciation for just how much they have done and continue to do 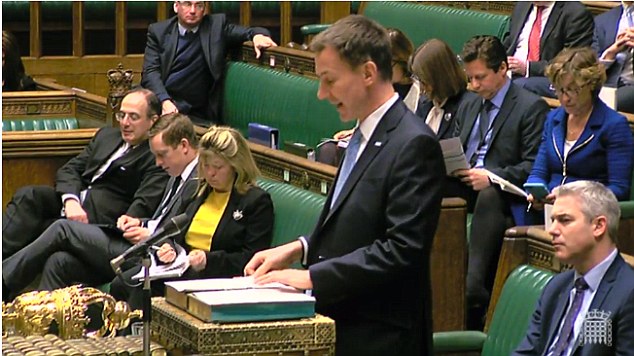 He said staff are expected to cut sick rates and have a renewed focus on their career development under today’s agreement.

Mr Hunt said the £4billion funding to bankroll the change is new money form the Treasury.

But he said the Government is only in a position to offer the extra money because it has been responsible and brought Britain’s ballooning deficit down.

Head of health at Unison – the biggest union in the health sector – Sara Gorton said: ‘The agreement means an end at last to the Government’s self-defeating and unfair one per cent pay cap.

‘It won’t solve every problem in the NHS, but would go a long way towards making dedicated health staff feel more valued, lift flagging morale, and help turn the tide on employers’ staffing problems.’

What is the pay deal which has been offered to NHS staff?

The Government has made an offer to lift the 1 per cent pay freeze for NHS staff.

The offer gives NHS staff between 6.5 per cent and 29 percent pay rise over the next three years.

Hospital caterers, cleaners, porters and other staff on the lowest pay grade would get an immediate pay rise of over £2,000 this year.

Some 100,000 people are expected to benefit from this change.

This is an increase of between 11 and 13 per cent.

Unions have agreed to a fleet of reforms in exchange for the pay rise.

So staff have agreed to try to boost health to cut sickness rates in the NHS – which are around a third higher than the public sector average.

And smaller incremental pay rises will be scrapped and staff given bigger hikes less often.

Pay will go up hand in hand with a worker’s skills.

Employees will also have a renewed focus on professional development – boosting skills in the NHS.

She added:  ‘If health workers accept the offer, everyone’s wages will go further, and the lowest paid would get a significant income boost.

‘Starting salaries for nurses, midwives and other health professionals would also become more attractive to people considering a career in the NHS.’

Royal College of Nursing chief Josie Irwin said: ‘Members campaigned hard to put an end to the years of poor pay rises and this deal is a significant move in the right direction from a government still committed to austerity.

‘When there are 40,000 unfilled nurse jobs in England alone, it should begin to make the profession more attractive to nurses of today and tomorrow alike.

‘Starting salaries will be higher and current nursing staff will reach the top of their pay bands much faster than before, without changes to their leave entitlement or unsocial hour payments.

‘With this agreement, the government and NHS has acknowledged that the greatest rise in productivity will come from a healthy and motivated workforce.’

But the GMB is recommending its members reject the pay deal – which it says is still a below inflation rise.

Trade union members will vote on the deal in the coming weeks.

Theresa May signalled she was ready to loosen the purse strings after the general election last year, when anger about austerity was seen as one of the main reasons for the Tories losing their overall majority.

And she has come under continued pressure from her Tory backbenchers to give NHS staff a pay rise.

Funds are expected to be made available for similar pay rises in Wales, Scotland and Northern Ireland.

The deal will be structured to give higher rises to the lowest paid.

Pay bands will be changed so that workers can move more quickly through their pay grade.

The NHS has nine different pay bands, ranging from £15,000 a year for porters, cleaners and kitchen staff to more than £100,000 for senior managers. Workers in the health service have been offered an average 6.5 per cent rise over three years, while the lowest paid could get up to 30 per cent (file picture) 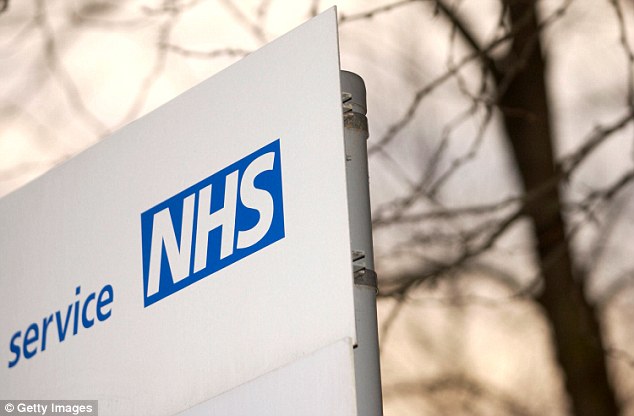 The NHS has nine different pay bands, ranging from £15,000 a year for porters, cleaners and kitchen staff to more than £100,000 for senior managers

The highest paid frontline position is band eight, which attracts salaries of up to £80,000 a year.

It is thought those on the lowest salaries could see their pay rise by £4,000.

NHS workers have been subject to the Government’s public sector pay cap for seven years, with increases limited to no more than 1 per cent.

The settlement will raise hopes among other public sector workers that they will also be in line for a pay rise.

But a Treasury source has played down the prospect that other areas will get similar offers, describing the NHS as a ‘special case’.