Intensive care units in the UK are in ‘relatively short supply’ of vital medicines including some anaesthetics.

As units become filled with covid-19 patients, many are requiring the same combination of drugs along with a steady supply of oxygen in their fight for survival.

However Dr Ron Daniels, a consultant in the Midlands told the BBC that hospitals there had already resorted to using alternative key medicines as supplies are ‘running low’.

They are in short supply of the common anaesthetic propofol, and the opioid painkiller alfentanil, said Dr Daniels.

He added that there is too much emphasis on providing ventilators and not enough on vital medicines, as patients who had reached the point of using a ventilator in critical care would also require blood pressure and circulation drugs.

Dr Daniels warned that the quality of care for all patients in intensive care is likely to suffer as drugs, such as the life-saving low blood pressure drug noradrenaline, are swapped out for older alternatives in the less critical patients.

The Royal College of Anaesthetists admitted that supplies of anaesthetic in some areas of the UK are ‘a bit stretched’, reports the BBC.

Four leading royal colleges and health organisations have appealed to medical staff to ‘act immediately’ by using alternatives to the usual first line medications – with changes made in the guidelines on which anaesthetic drugs to use during the pandemic. 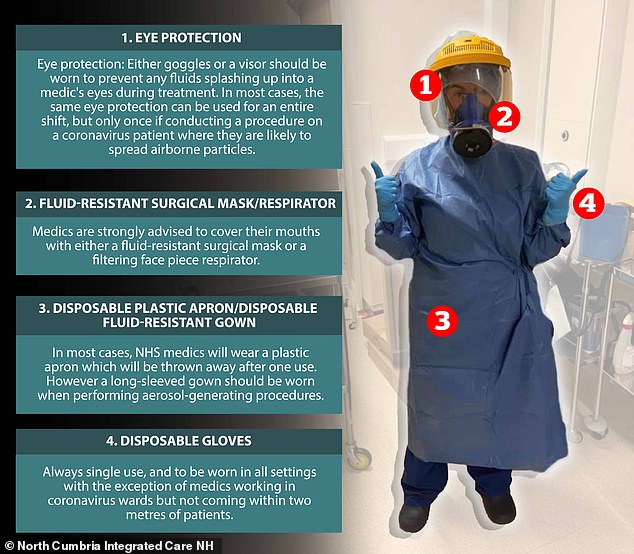 But Dr Alison Pittard, dean of the Faculty of Intensive Care Medicine, said that the NHS was not going to run out of medicines to treat patients and that care will not be compromised.

She said that medics have been issued new guidance telling them to use alternatives which were ‘perfectly safe for patients’.

With trips to the dentist plummeting millions of Britons could be left without dental care as one in five practices say they are on the brink of collapse.

A survey carried out by the British Dental Association (BDA) of 2,800 practices found that 71.5 per cent said they could only remain afloat for the next three months at the most, reports The Sunday Times.

And one in five said they wouldn’t last the month.

Most dental practices rely on both NHS and private income, however they are paid for the work they do and due to the coronavirus many are unwilling to visit the dentist.

Self employed dentists are eligible for government support if they earn under £50,000, however on average they earn £69,000.

Mick Armstrong who chairs the BDA said: ‘Practices are weeks from a cliff edge. Without meaningful support, the nation’s dental services face decimation.’

Patients with dental emergencies have in some places been forced to attend A&E for treatment as practices are forced to close, overstretching an already at capacity hospital service.

Dr Pittard added: ‘We are not going to run out of drugs to treat patients, that’s the bottom line.

‘We may do things differently, but patient care won’t be compromised because we have to change the choice of drug.

‘I want to reassure the public – we know what we are doing, we are working together, we know what the situation is, and we are making sure they are our first priority.’

In it, they said that while medics might not always be able to use their first choice drug, they expect them to be able to use an appropriate alternative drug.

Dr Pittard said: ‘There may be shortages of specific drugs but there are always alternatives in the same class that although staff will need to slightly modify their practice, they will be perfectly safe for patients.’

But the four leaders also stressed the public should continue to adhere to the Government’s guidance to stay at home.

They added: ‘By staying at home, not only will you significantly reduce the chance of being infected with Covid-19, but you will save lives by stopping the spread of this virus.

‘Your compliant and considerate actions will help reduce the burden on NHS resources and staff who are working night and day to treat incredibly sick patients.’

The Department of Health and Social Care said it had banned the ‘parallel export’ of more than 100 medicines to keep supplies in the UK.

The government said it was ‘aware there is an increase in demand for a number of intensive care drugs’, with Chief Pharmaceutical officer of NHS England, Keith Ridge, also privately expressing his concern over the availability of drugs, reports the BBC. 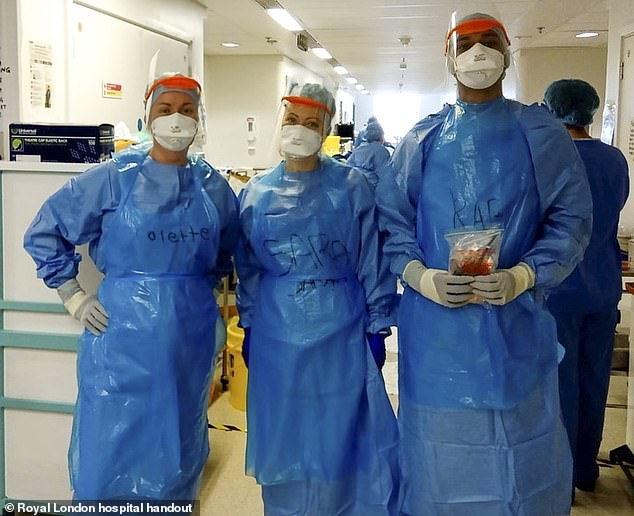 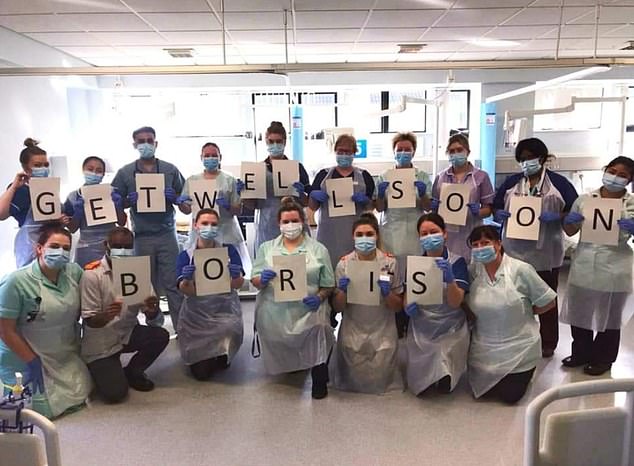 NHS Providers told The Sunday Telegraph that the country was living ‘hand to mouth’ due to a lack of stock supplied to it’s hospitals. Pictured: Staff at George Eliot Hospital, Nuneaton

In a statement, the Department of Health and Social Care said it was ‘working closely with industry, the NHS and the relevant national expert groups to ensure precautions are in place to reduce the likelihood of shortages.’ 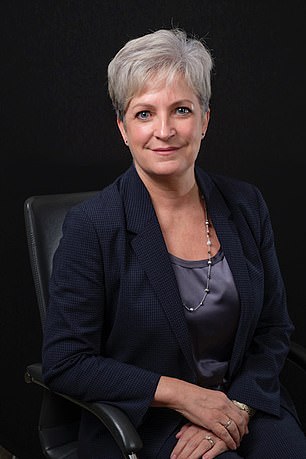 Dr Alison Pittard, dean of the Faculty of Intensive Care Medicine, said that the NHS was not going to run out of medicines

He added: ‘The very significant increase in the number of patients requiring mechanical ventilation in intensive care as a result of Covid-19 has inevitably led to an unprecedented demand for the medicines required for that treatment.

‘We are currently seeing four-fold demand increases in some areas and so we are particularly focused on the supply of these critical products.

‘Increasing production and supply to unprecedented levels in some cases cannot be achieved instantly but manufacturers are working extremely hard to help ensure the highest levels of supply possible.’

The news comes as GPs were found to be advising patients to buy their own oxygen supply privately as shortages hit the NHS, reports The Sunday Times.

Hospitals have encountered a problem supplying oxygen to numerous covid-19 patients at once as pipelines pumping liquid oxygen from its stores struggle to keep up with the unprecedented demand.

Forty Commando Royal Marines is among five military units being trained to assist with delivering oxygen supplies should the normal supply chain fail due to a lack of drivers – with 100 marines taking tests to gain their heavy goods vehicle licences.

Oxygen supplier to the NHS, the BOC Group, said that it had ‘sufficient’ staff and was confident it could meet demand for the gas in the UK.

Suppliers said people were buying Oxygen for their personal supply to protect relatives they thought could be badly hit by covid-19.

Private company Pure 02 in Manchester, said it had been inundated with a call every 12 seconds in the first days of the pandemic. 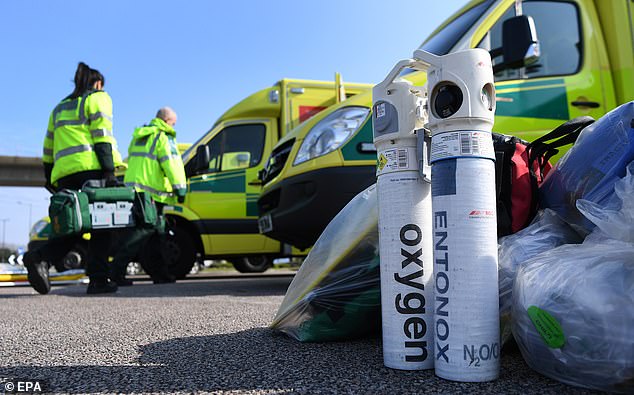 Elsewhere in the national health service a shortage of gowns has led to hospitals sourcing their own stocks from China by commissioning flights to carry the supplies.

The information came to light after the government revealed a new plan to sign up more manufacturers to produce the vital personal protective equipment (PPE).

In a leaked memo yesterday a ‘national shortage’ of the long-sleeved gowns used to treat covid-19 patients was revealed, reports The Sunday Telegraph.

Kingston Hospital NHS Trust in Surrey warned they were very close to running out of the gowns in the memo, however they have since secured more.

NHS Providers told The Sunday Telegraph that the country was living ‘hand to mouth’ due to a lack of stock supplied to it’s hospitals.

The government stated that current PPE supplies have been supplemented by £1.2million worth of goggles and masks donated by companies including B&Q, the publication reports.

Twenty four healthcare workers have died after contracting covid-19 as the Health Secretary came under fire for the lack of PPE available to workers.