NHS tax on the cards as 98 MPs call for inquiry

Theresa May is under pressure to launch an inquiry into the NHS and social care crisis.

Almost 100 MPs have written to the Prime Minister urging her to set up a Parliamentary Commission on the long-term funding.

This would establish whether to raise taxes and, specifically, if there should be a ring-fenced levy for health and social care.

Yesterday Health and Social Care Secretary Jeremy Hunt said tax increases were the only way to provide extra cash for such services.

He has thrown his weight behind a ‘hypothecated’ tax – where the money would go straight to the NHS rather than the Treasury – pointing out most of the public were in favour.

Mr Hunt also called for a ten-year NHS spending deal to fix its budget problems. He said the service was in a ‘totally unique situation’ because in ten years’ time there will be a million more over-75s due to the aging population.

Today’s letter – which has been co-signed by 98 cross-party MPs – urges Mrs May to break the ‘political deadlock’ over the crisis.

It states: ‘The system-wide pressures over recent weeks cannot be fully attributed to flu and the cold snap. They also reflect more serious and underlying issues facing the NHS, public health and social care.

‘These systems are overstretched, poorly integrated and are no longer able to keep pace with rising demand and the cost pressures of new drugs and technologies.’ 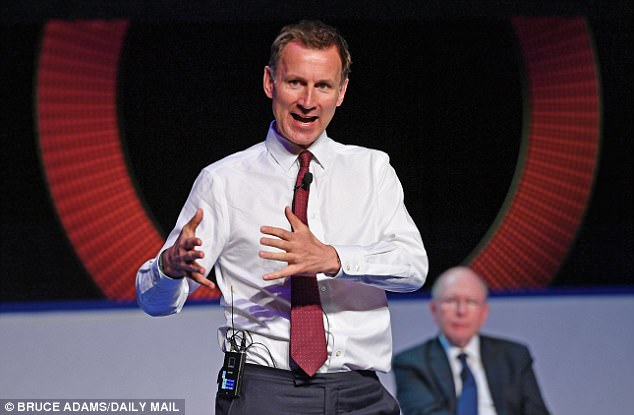 Dr Wollaston, a former GP who is chair of the health select committee said: ‘We believe this is the best way to examine what funding is needed both now and into the long term and to seek a consensus on the options for sharing the costs.

‘This year we mark the 70th anniversary of our NHS and we believe that the public want their vital health and care services to be given the funding needed to meet rising demand.’

Mr Hunt told ITV’s Peston on Sunday: ‘We are a taxpayer-funded system so in the end if we are going to get more resources… it will have to come through the tax system. If you ask the public…they are very clear they would like to see more money going to the NHS and they would be prepared to see some of their taxes going into the NHS.’

However, he was clear the service would also need to tackle inefficiencies. Last week Mr Hunt warned that elderly patients were being treated like ‘tasks’ on a to-do list in the failing social care system.

He promised to overhaul social care and introduce a new cap on the ‘punitive’ care fees paid by families who often have to sell assets.

n Expectant mothers will be treated by the same midwives throughout their pregnancy in a bid to reduce miscarriages and stillbirths under plans being set out by Mr Hunt.

He will announce plans tomorrow to train 3,000 extra midwives and maternity support staff over four years.