NHS Test and Trace is still failing to track down up to half of Covid-19 patients’ contacts in areas most at risk of local lockdowns, it emerged last night.

In Luton, which has the fifth highest infection rate in England, just 47 per cent of potentially-infected people were contacted by the system since its launch on May 28.

Only 65 per cent of close contacts in Leicester – which had to retreat back into lockdown last month after a spike in cases – were tracked down by tracers.

It means 3,340 people who may have had the disease in the city slipped under the radar and could have spread it further through the population.

Scientists have repeatedly warned contact tracing systems need to catch and isolate 80 per cent of potential Covid-19 patients to keep the epidemic squashed.

Language barriers may partly explain the low success rates in some of the worst-hit areas, where the virus is disproportionately affecting people of south Asian heritage.

In Luton, for example, 20 per cent of the population do not speak English as their first language, along with 27.5 per cent in Leicester, which has the highest rate in the country. In Blackburn it is 13.4 per cent, according to Statista.

Other potential explanations include a distrust of unknown callers, missed emails or people outright refusing to hand over contact details.

Local councilors and public health officials are now demanding more control over the test and trace process on the back of the ‘very concerning’ figures.

They say devolving power to local authorities could allow them to do door-to-door visits if contacts cannot be reached by other means.

NHS Test and Trace is still failing to track down up to half of Covid-19 patients’ contacts in areas most at risk of local lockdowns (top ten, shown) 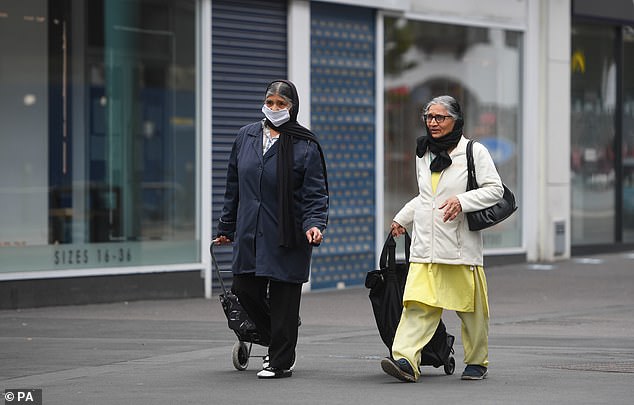 People walk through the centre of Leicester, where localised coronavirus lockdown restrictions have been in place since June 29. Only 65 per cent of close contacts in Leicester were tracked down by tracers

The data, obtained by the Guardian, looked at contact tracing results from between May 28 and June 17.

It revealed thousands more potential patients in other areas of England with rising infections were being missed by the system.

A total of 984 close contacts in Kirklees, West Yorkshire, were not tracked down, meaning a third of potential patients (33 per cent) are unaware they might have the disease.

In Rochdale, Greater Manchester, 759 contacts weren’t reached by tracers, which accounted for more than four in 10 suspected patients.

For Blackburn with Darwen, which is being kept under review amid a surge in infections, at least 448 people were missed (46 per cent).

The government’s Scientific Advisory Group for Emergencies (SAGE) has said the system must aim to reach 80 per cent of close contacts and get them isolated within 72 hours for the programme to work.

Executive Chair of NHS Test and Trace, Dido Harding, has admitted in the past that the system has faced issues such as language barriers and working schedules which prevented people from answering the phone.

‘There’s a lot we are doing to improve it,’ she said, ‘We are calling up to 10 times a day for one individual.

‘We have increased our translation services, we have included multiple languages including sign language.’

Local leaders reacting to the findings are now demanding the Government let them take more control of the system because they have the community ties to be able to hunt down contacts on a street level. 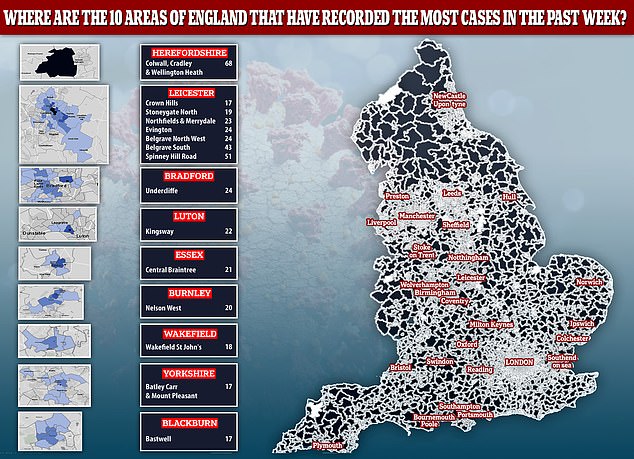 The most up-to-date data released by the Government shows Colwall, Cradley and Wellington Heath in Herefordshire was the worst-hit place in England, recording 68 new cases between July 6 and 12. The next four worst-hit middle super output areas — small geographical areas used for statistics — were all in Leicester

Contact tracers need to catch 80 per cent of infections and test suspected patients within three days to keep coronavirus epidemics squashed, a study has found.

Researchers from the University of Utrecht in the Netherlands said the reproduction R rate can be kept under one as long as only two in 10 patients slip under the radar.

Any more than that risks driving the R – the average number of people each coronavirus patient infects – to the point at which the crisis could spiral again.

And people need to be swabbed and given results within three days to ensure they aren’t tempted to go outside and mingle with others when results don’t come back.

It found that if testing is delayed by three days or more, even a system that is able to trace 100 per cent of contacts with no delays cannot bring the R value below 1.

Today it emerged that the UK’s contact tracing system is only finding 78 per cent of patients who test positive – despite launching two months ago.

More than four thousand people every week who receive a coronavirus test are waiting more than 72 hours for a result, Government data shows.

The Government’s own scientific advisers have been banging the drum about the need to catch 80 per cent of infections throughout the crisis.

NHS Test and Trace, in its current state, sees tracers bombard contacts with texts, emails or phone calls up to 10 times a day.

Gerry Taylor, Luton borough council’s director of public health, said she was ‘very concerned’ at the low rate in her town and blamed the centralised system for being too far removed from communities.

She told the Guardian: ‘Clearly 47 per cent is too low. The bulk of the contact tracing feels somewhat distant from us and working more closely together with the national system I think would be a huge advantage.’

Kate Hollern, the Labour MP for Blackburn,added: ‘People are out there spreading the virus unknowingly due to this government failure.

‘The responsibility and resources for this should have been with local government, who have the local knowledge. It’s a complete shambles and we really need to get control of it.’

Bradford council, which is also being kept under review amid rising cases, declined to provide Test and Trace figures, but admitted ‘a high number of contacts’ were being missed by the national programme.

A council spokeswoman told the newspaper she was urging the Government ‘to allow us to set up a local extension to the national test-and-trace system which would enable us to follow up uncontacted data with door-to-door visits, something which no national system can really do.’

A Department of Health and Social Care spokesperson said: ‘NHS test and trace has already helped test and isolate more than 180,000 cases – helping us control the spread of the virus, prevent a second wave and save lives. This represents 81% of close contacts identified by those who test positive.

Health bosses last week released an interactive map breaking down new coronavirus cases by postcode in an effort to keep a lid on local outbreaks.

The map of England, which is updated each week, paints a clear picture showing the Covid-19 crisis in cities, towns and even small villages being hit hard by the virus.

Local public health bosses in each region will also be given positive test data and contact tracing figures each day after mounting pressure on officials to provide more data intelligence.