NHS Test and Trace is still failing to find a quarter of patients who test positive for coronavirus, shocking data revealed today.

A total of 1,383 people with the disease were not reached and so did not provide information about close contacts for tracers to follow up and isolate. Another 161 people who tested positive could not be reached at all by the tracers — who phone, text and email someone 10 times a day to get hold of them.

Scientists have warned contact tracing programmes need to catch at least 80 per cent of infections to keep the epidemic squashed.

The Department of Health report also showed that, of the 4,639 patients who were tracked down, one in four did not hand over a single close contact.

Some of these people would have outright refused to provide information about their friends and family. But others were unable to give details because they had only come into contact with complete strangers, such as on the bus.

Today’s report also revealed fewer than one in 10 of people who take a coronavirus test at home get results within 24 hours.

And just over half (53 per cent) of people who are swabbed at testing centres or drive-through stations wait more than a day for a diagnosis, too.

It comes despite Boris Johnson’s promise to turn around every coronavirus test within 24 hours day by the end of the month.

Of 6,183 Covid-19 patients referred to the contact tracing programme between June 18 and June 24, just 4,639 were actually tracked down. A total of 1,383 people with the disease were not reached. An additional 161 people who tested positive could not be reached at all by the tracers – who phone, text and email someone 10 times a day to get hold of them 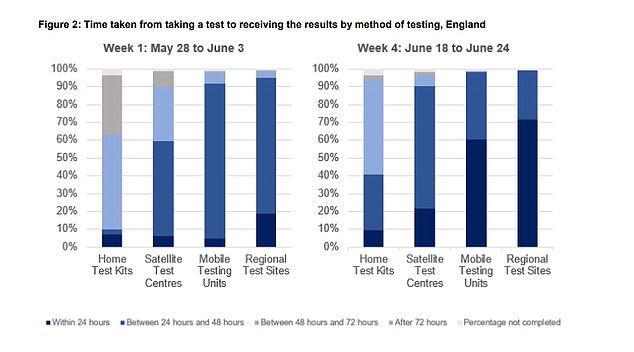 Today’s update revealed that a total of 27,125 people have been referred NHS Test and Trace in the month since the system launched.

Of this total, just 20,039 people (74 per cent) were reached and asked to provide details of recent contacts.

A total of 6,245 (23 per cent) were not tracked down and therefore thousands of their close contacts were missed.

An additional 841 people (3 per cent) could not be reached because their communication details had not been provided.

Justin Madders, Labour’s Shadow Health Minister, said the high volume of missed cases highlighted the scheme was ‘far from the world leading system we were promised.’

She added: ‘We are now three weeks into the supposed world leading test and trace system and there are still a quarter of people not being contacted.

‘There is no doubt that this is well below the levels we need to effectively contain the virus and the Government seems to be too slow again to react to these failings.

‘As we now begin to see localised lockdowns we need Ministers to be far more rigorous about getting to the bottom of why the contact rate isn’t improving.

‘The performance so far simply isn’t good enough and far from the world leading system we were promised.’

Meanwhile, scientists have warned that a failure to process tests within 24 hours is rendering the track and trace system useless and could allow the crisis to spiral.

SAGE says close contacts need to be tracked down and told to self isolate within 24 hours of interacting with a coronavirus-infected patient.

Any longer than that risks allowing people to unknowingly infect countless others, making it impossible for tracers to hunt down every contact.

But today’s report shows just 9.3 per cent of people who take a test at home get a result the following day. 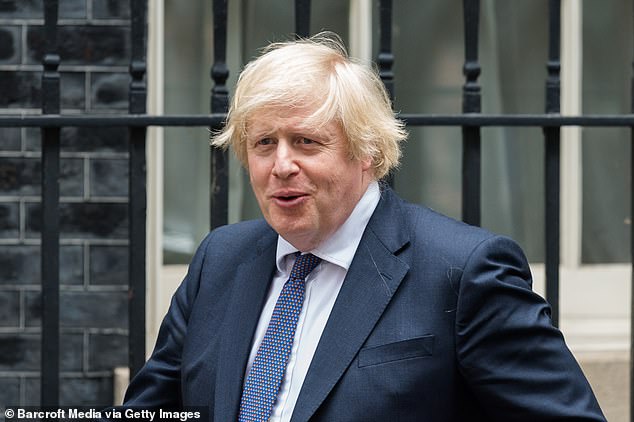 Half of home Covid-19 tests are taking four or more days to give a diagnosis, it emerged today as Boris Johnson fails on his promise to process all swabs in 24 hours

Was Leicester’s Covid surge down to more TESTING? Public Health England say increase in tests may be behind part of the increase that was not caused by any specific outbreak

There is no obvious source for a recent rise in coronavirus cases in Leicester and the growing number of people found carrying the virus could partly be due to a ‘growth in availability of testing’ in the city, a bombshell report revealed today.

The report reveals that about half of all cases were among Asian or British Asian people living in Leicester, and focussed in the east of the city, where BAME communities make up two-thirds of the local population.

It came as official figures published last night showed that coronavirus positive tests in England are down from 10.7 cases per 100,000 population to 6.7 in just a week – a drop of 37.4 per cent based on the latest available figures.

Health Secretary Matt Hancock tightened restrictions across Leicester and nearby suburbs on Monday, ordering non-essential shops to close and urging people not to travel in or out of the area.

The PHE report found an increase in the number of people aged under 19 who had been infected in the East Midlands city, from 5 per cent of all cases in mid-May to 15 per cent in June, and a similar increase in infections among working-age people.

The report said the increase in positive tests is ‘probably linked, in part, to the availability of testing to the general public’.

Mobile testing centres – which travelled to test 59,251 essential workers at sites including care homes, police stations and prisons in the week of June 18 – also only gave a result within 24 hours to four in 10 patients.

And results from antibody test kits – being trialled on healthcare staff to see if coronavirus survivors have immunity against the disease – were only turned around in a day 20 per cent of the time, figures show.

The Prime Minister promised on June 3 that every coronavirus test would be turned around within a day by the end of the month.

But Number 10 has so far failed to provide any data on progress towards hitting the target with the deadline now having passed.

The weekly statistics on the 24 hour target published today only cover the period between June 18-24. This means it will not become clear until the end of next week, when the second set of data will be published, if the target was met by June 30.

Asked yesterday if the Government does not yet know if the target was met by the deadline, the Prime Minister’s Official Spokesman told MailOnline: ‘I don’t, no.’

The Government has repeatedly failed to hit its own testing targets throughout the crisis, after struggling to bump swabs up to 100,000 a day in April then missing it for eight days straight in May.

Dr David Bonsall, of Oxford University, who has been advising the Government on contact tracing, told The Telegraph: ‘We have made it clear from the very start that speed is absolutely critical, we have got to find people before they infect others.

Modelling by Dr Bonsall’s team at Oxford found that taking longer than two days after a person showed Covid-19 symptoms to track their contacts halved the number of cases that were caught.

If a contact was not traced within six days then tracking them down would be useless because the are likely to have already passed it on to others, they found.

The majority of tests have been carried out in hospitals and in care homes, with more than 9.6million swabs handed out to patients, residents and staff – known as ‘Pillar 1’ testing.

Home tests of symptomatic cases have accounted for more than 2.8 million tests, half of the Government’s ‘Pillar 2’ testing scheme for people in the community.

Drive-through centres, which make up the rest of ‘Pillar 2’ tests, have so far accounted for 2.1million swabs.

Mr Johnson and Health Secretary Matt Hancock have faced questions throughout the pandemic over the amount of time it takes for people to get their test results.

The Prime Minister was grilled on the issue in the House of Commons on June 3 by former health secretary Jeremy Hunt.

Mr Hunt asked the Prime Minister to reveal how many tests were being processed within 24 hours and to commit to publishing that number on a regular basis.

Mr Johnson replied: ‘The answer is that we already turn around 90 per cent of tests within 48 hours.

‘The tests conducted at the 199 testing centres, as well as the mobile test centres, are all done within 24 hours, and I can undertake to him now to get all tests turned around in 24 hours by the end of June, except for difficulties with postal tests or insuperable problems like that.’

But the Government has failed to disclose whether they count their 24-hour target from the moment the test is taken or when a person develops symptoms and asks to have a test.

Professor John Newton – who was made leader of the UK’s testing programme in April – said the latter strategy was crucial to curbing the epidemic.

Executive chair of NHS Test and Trace, Dido Harding, said: ‘The data published today demonstrates the tireless efforts underway to continue to improve NHS Test and Trace. We have seen significant improvements in the time it takes to process test results, an important step to rapidly reach the contacts of those testing positive and ask them to self-isolate to prevent them spreading the virus further. I am very grateful to all those who have played their part and responded so well to the service.

‘If you have coronavirus symptoms, get a test immediately. You can be confident that you will receive your result quickly, with NHS Test and Trace reaching out to you if you test positive to help you identify your contacts and protect those around you. I urge anyone contacted by NHS Test and Trace to follow the advice they receive.’