The mother of a teenager who died under the car of an NHS trust has accused its bosses of ‘arming itself with legal weapons and dirty tricks’ after a five-year campaign for justice ended with the body being fined £2million.

Southern Health NHS Foundation Trust was hit with the huge bill over the ‘avoidable deaths’ of two vulnerable patients at a heavily criticised care unit.

Presiding at Oxford Crown Court, Mr Justice Stuart-Smith said the fine was justified by the ‘terrible consequences’ of the trust’s actions, which led to the death of epileptic teenager Connor Sparrowhawk at Slade House care and assessment unit in Oxford after he was found drowned in a bath.

Southern Health also admitted breaches over the death of Teresa Colvin, who was found hanged at the Ashford mental health unit at Woodhaven Hospital near Southampton in April 2012.

The trust admitted two counts of failing to discharge its duty relating to their care.

Southern Health NHS Foundation Trust has been fined £2million after admitting health and safety breaches that led to the death of Connor Sparrowhawk, pictured, who died after an epileptic fit in a bath in July 2013 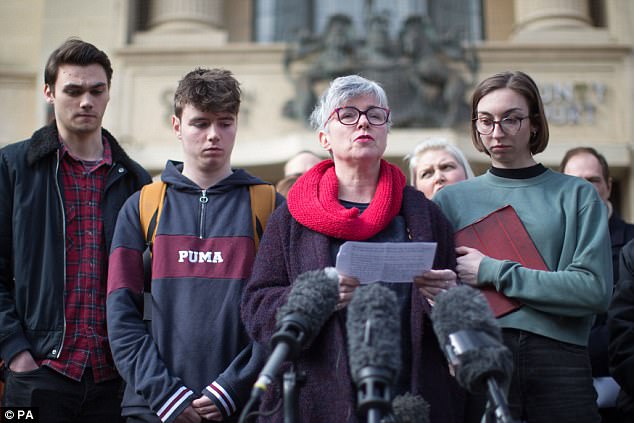 Surrounded by friends and family, Connor’s mother Dr Sara Ryan said no one should die a ‘preventable death’ after the result of the hearing at Oxford Crown Court

Sentencing at Oxford Crown Court, the judge said the penalty was ‘a just and proportionate outcome that marks the seriousness of the Trust’s offending, the terrible consequences of that offending, and the other material factors that I have indicated’.

Speaking after the case, Connor’s mother Dr Sara Ryan said: ‘No-one should die from a preventable death while in the care of the State.’

She added: ‘I’m left thinking if Connor was here now in the shadow of Oxford Crown Court and St Aldates police station, he would say: “Why mum?” And I would say: “I don’t know, but we’ve done you proud”.’

Dr Ryan went on to thank the judge for his comments and sentence and also praised the Health and Safety Executive for its continual investigation.

Also outside the court was Mrs Colvin’s husband Roger who called his wife TJ throughout proceedings said she had been ‘beautiful and loving woman.’

He added: ‘Six years on I still have many questions, my life is much poorer. We all loved her so much. The hospital was a place of safety and Southern Health failed.’

Sentencing, Mr Justice Stuart-Smith told a packed public gallery at Oxford Crown Court: ‘Such a fine will not put the Trust out of business. Every pound that is taken from the Trust is a pound less that can be spent on the public good in the future.

‘The Trust’s conduct more recently has been much improved, not one member of the board was present when these deaths happened.

‘However, the Trust showed many failings and did not change when required, they ignored the warnings of many employees. They showed a systemic failure and lives have been devastated by the deep and catastrophic losses. 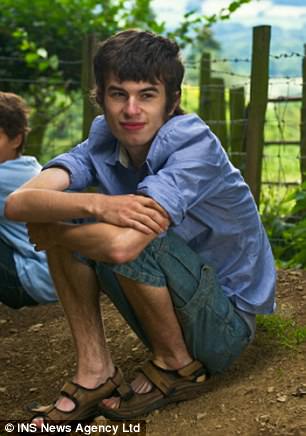 Connor, 18, suffered with autism and epilepsy but was left alone in the bath for 15 minutes

‘Mrs Ryan’s [Connor’s mother] statement made for unbearable reading and the original verdict of her son dying from natural causes only compounded her grief.’

The Trust was prosecuted by the Health and Safety Executive after the ‘tireless’ work of Sara Ryan, the mother of Connor.

The court previously heard evidence in relation to the ‘preventable’ death of Connor, who suffered with autism and epilepsy, on July 4, 2013.

He had been informally admitted to Slade House in March 2013, but that was made compulsory until April 16 when it returned to being informal again.

Mr Thorogood told how Connor would get checked by staff in the bath every 10 minutes, but this changed to 15 minutes when he was ‘at his most acute risk.

‘There was no rationale I discovered in the evidence why 10 minutes had gone to 15 minutes in the bath,’ he said.

On Teresa Colvin’s death Mr Thorogood said there were systematic long-standing failings at the Trust which accepted her death by hanging was entirely avoidable and should not have happened.

Southern Health NHS Foundation Trust admitted breaching Section 3 of the Health and Safety at Work Act 1974 by failing to protect her from serious self-harm last year.

Speaking on behalf of the Trust after they had been handed their fine, Hannah Taylor said: ‘The trust wholeheartedly accepts its failings. We will continue to commit to leading to serve the people it serves going forwards.’ 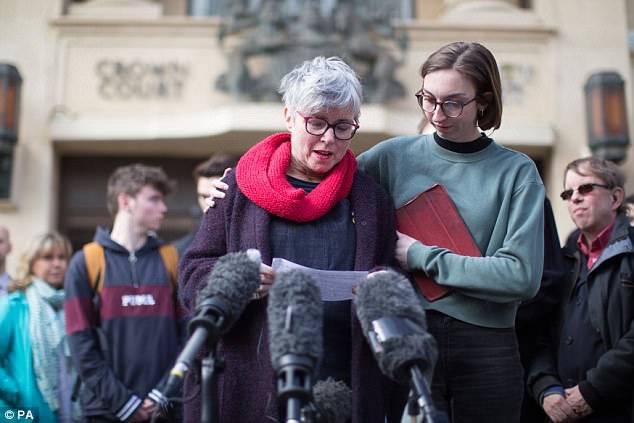 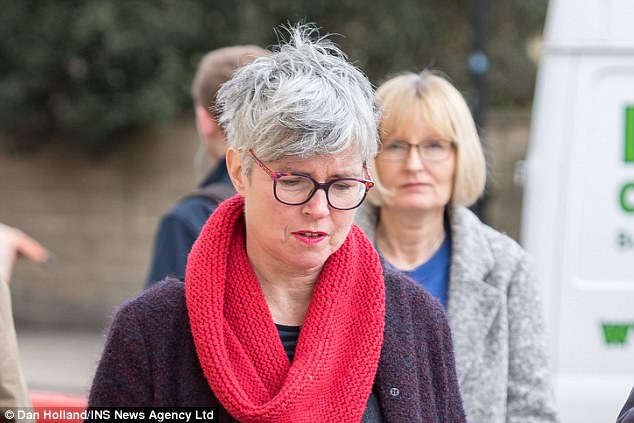 His mother Sara Ryan, pictured, has been campaigning for justice for years and said no one should die a ‘preventable death’ after the hearing

The court also heard how 98 per cent of staff were now sufficiently trained in the concerned areas brought up through the trial and that £11.5 million has been spent throughout the Trust on it’s potential ligature training and prevention methods.

Last month Dr Valerie Murphy was suspended from working for a year after an epileptic teenager drowned in a bath while left alone in an NHS care home.

Dr Murphy was the psychiatrist responsible for the care of Mr Sparrowhawk, an 18-year-old with learning difficulties, who was found submerged in the bath at Slade House in Oxford in July 2013.

Medical watchdogs have previously ruled she had ‘ultimate responsibility’ for the teenager and her fitness to practise was impaired.

The Medical Practitioners Tribunal Service (MPTS), during a hearing last August, heard Mr Sparrowhawk had already had two suspected epileptic fits at the unit, including an earlier episode in the bath, in the weeks before his death. 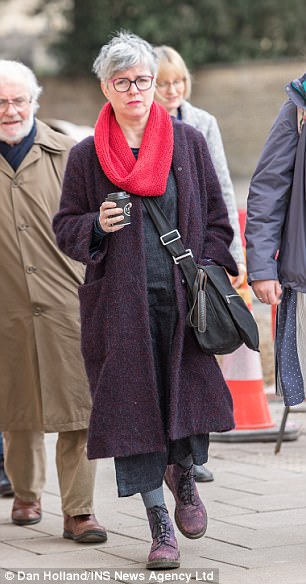 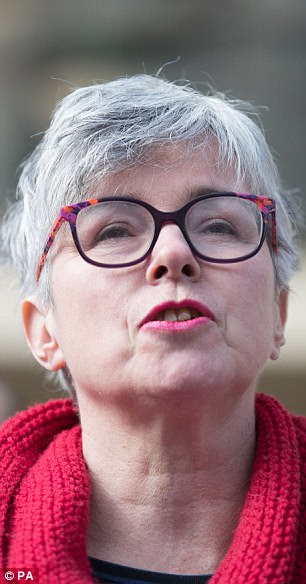 Oxford academic Dr Ryan, pictured outside court, said the fight for justice after her son’s death was ‘unimaginably brutal’

Dr Murphy had been criticised for ‘looking for excuses’ and for her lack of insight and remorse, and her failure to apologise to the teenager’s family.

Dr Ryan, an Oxford University academic, told the MPTS hearing last year her own concerns were dismissed and she found Dr Murphy ‘dismissive, arrogant and distant’.

‘Instead they referred six nurses to the NMC. We had to refer her ourselves.

‘Over the past four years, Valerie Murphy has repeatedly failed to show any remorse and has failed to apologise to us. She has allowed her legal counsel on two occasions to subject me to cruel cross-examination insinuating I was somehow responsible for his death.

‘At the sanction hearing this week she apologised to the tribunal for Connor’s death.

‘This experience has been unimaginably brutal and not unusual. Families whose loved ones die in state care are commonly re-traumatised by these processes.

‘We would like to thank the GMC for trying to ease this journey for us. We would also like to thank all those people who supported the crowdfunding campaign to allow us to live tweet proceedings.’