A severe snow warning has been issued for parts of Britain with up to two inches set to fall today ahead of a bitterly cold weekend.

Forecasters say the band of rain, sleet and snow will move eastwards across the country into this evening, with the north of England, Yorkshire, the Midlands and Scotland all likely to be hit.

It comes after freezing Britain endured the coldest night of the year so far with temperatures plunging to a bitter -10.8C. This weekend is also set to be a chilly one as Arctic air sweeps across Britain.

Sunday is expected to be colder than Saturday with temperatures dropping to -2C in the south east and Scotland.

Meanwhile, snow has already been seen falling in areas such as Liverpool, Wales and Scotland today, bringing with it the potential for travel disruption as commuters head home for the weekend. Authorities are preparing to dig into stockpiled salt while high-tech gritters are also on standby. 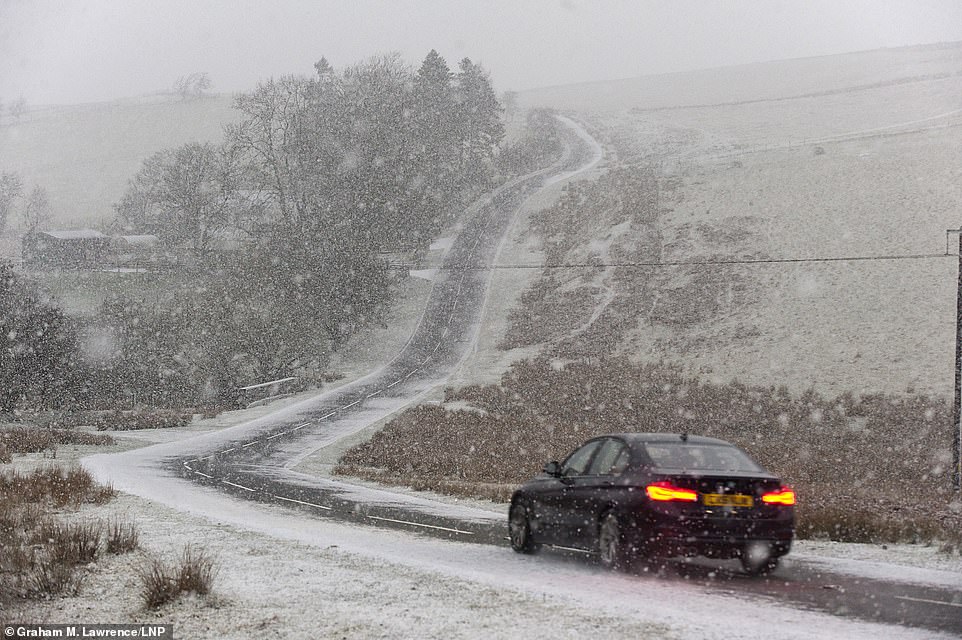 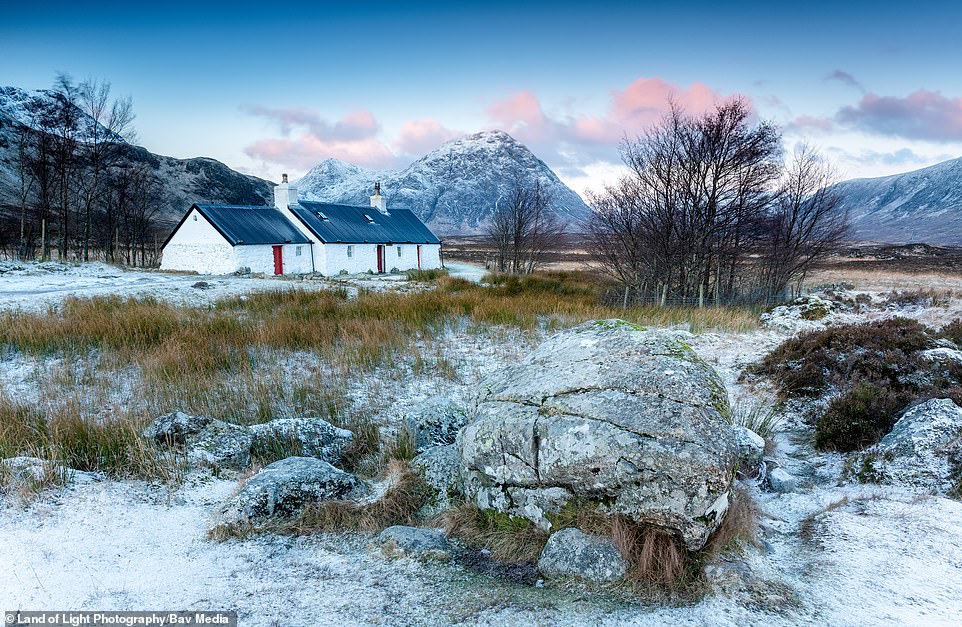 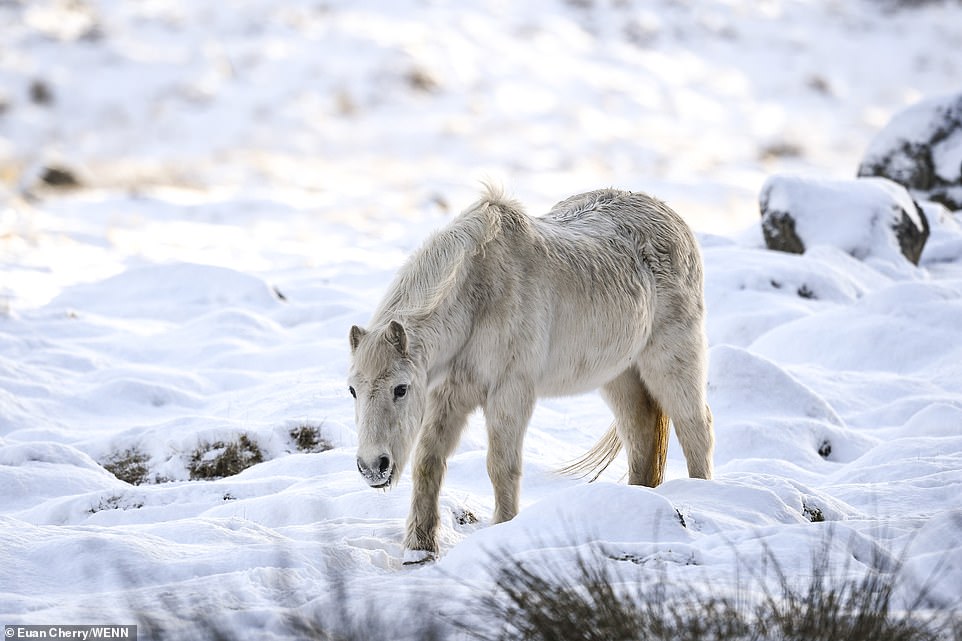 Fields were blanketed in snow this morning after a freezing cold night. Pictured: Glen muick in Aberdeenshire

It comes after health bosses faced ridicule for warning people to don ‘appropriate footwear and clothing’ if they did decide to go outside.

The tweet was deleted last night and NHS England North said it had been put up in error. But MPs said the warning was the perfect example of ‘snowflake Britain’.

The full tweet from NHS England North said: ‘With temperatures dropping and snow beginning to fall in the North East of England, it is vital that you only go outside if it is really necessary. If you do venture outdoors, please make sure you wear appropriate footwear and clothing.’

Although the tweet was deleted, a range of other cold-weather advice posted by the quango remained on Twitter, plus a link to a Met Office advice page urging people to stock up in case of bad weather which means they have to leave home quickly or their power and water are disrupted.

Tory Andrew Percy, who represents Brigg and Goole, said: ‘Some countries around the world such as Canada have huge amounts of snowfall every winter and people still manage to go out and live their lives.

‘Of course people need to take care, but we don’t need turning into snowflakes because of a few snowflakes.’

Icy conditions are expected today and into next week while predictions for the coming months suggest temperatures will plummet.

The coldest temperatures overnight on Friday were recorded in Aberdeenshire in Braemar and Aboyne as they dropped to below -10C.

The rest of Britain was braced to be hit by sleet, rain and freezing temperatures.

Yesterday, parts of Scotland were brought to a standstill by snow and ice amid a spate of accidents. Forecasters said commuters are likely to face further misery as the freezing conditions continue into next week. 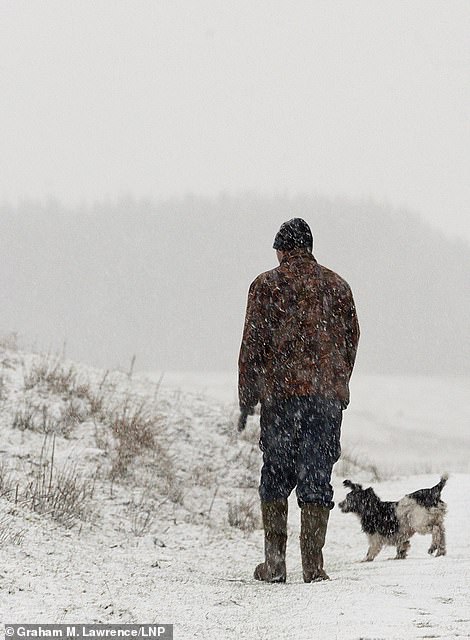 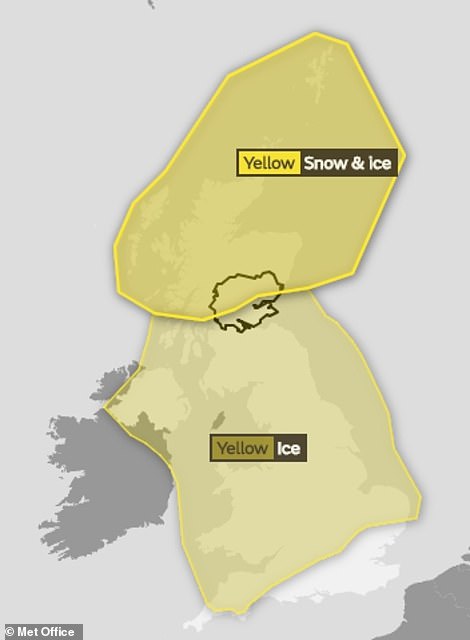 A man was seen walking his dog on the high moorland of the Mynydd Epynt range near Builth Wells in Powys on Friday (left). Pictured right is the snow and ice warning across Britain with a chilly weekend in store for much of the UK 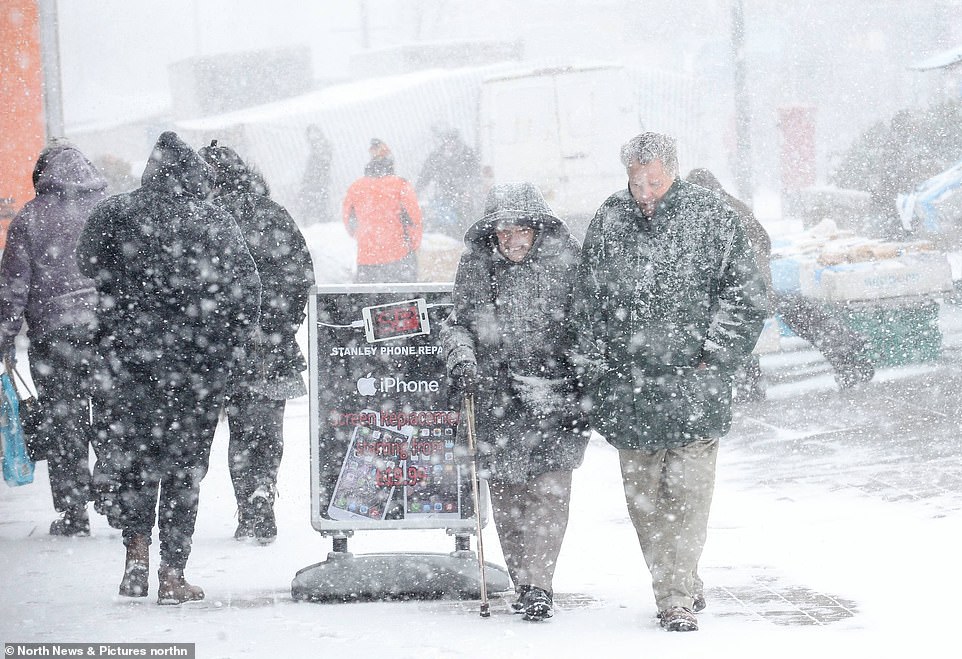 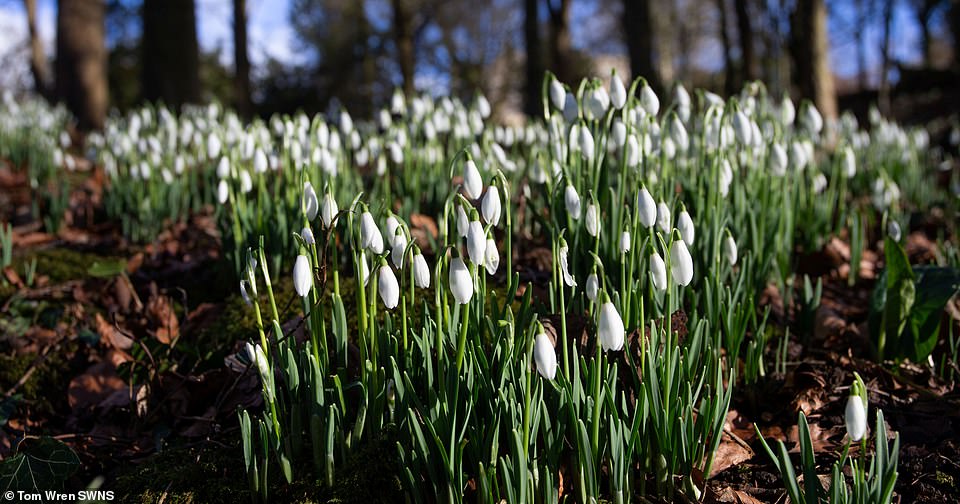 The early snowdrops at Rococo Gardens in Painswick, Gloucestershire were photographed this week as frost covered much of the country 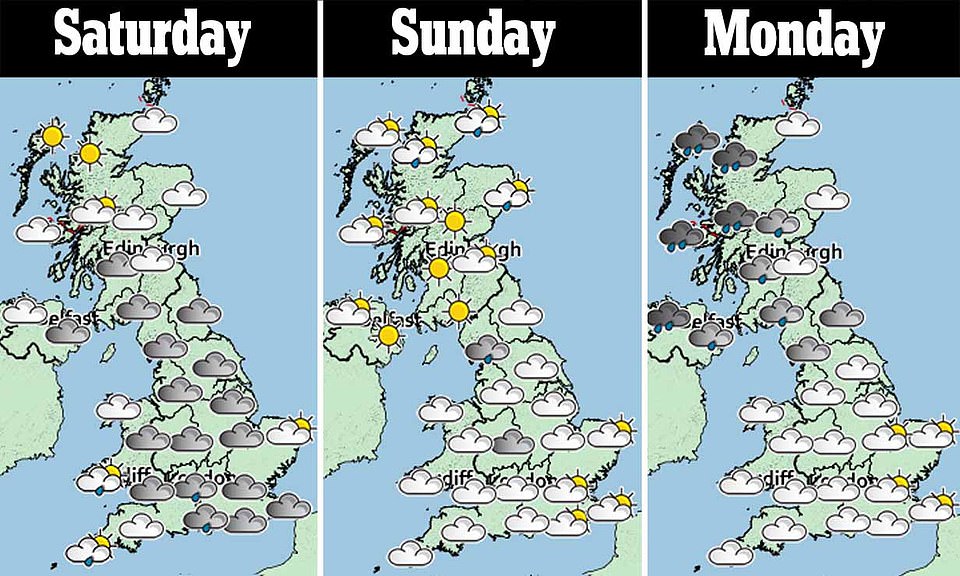 Several roads throughout Aberdeenshire and the Cairngorms were badly affected by drifting snow yesterday. A car ended up on its roof near Crathie, Aberdeenshire, but no one was seriously hurt.

Alex Burkill, a Meteorologist with the Met Office told MailOnline: ‘Over the weekend it is still going to be cold by day and night, but I don’t think temperatures will be quite as low.

‘However, next week has the potential to be considerably colder. There is still a lot of uncertainty.

‘We could see 2-4 centimetres of snow in Wales above 250metres, which is not high ground for Wales.’

The Met Office also warned of snow, sleet and rain pushing eastward and settling in central and Northern England with the ‘potential to cause disruption.’

There is also expected to be settling snow in central and northern England, with rain, sleet and snow pushing eastwards from Friday and over the weekend.

Mr Burhill added: ‘I think tonight won’t be as cold there will be a lot of cloud

‘There will be frost in the north of Scotland and temperatures are not as low.’ 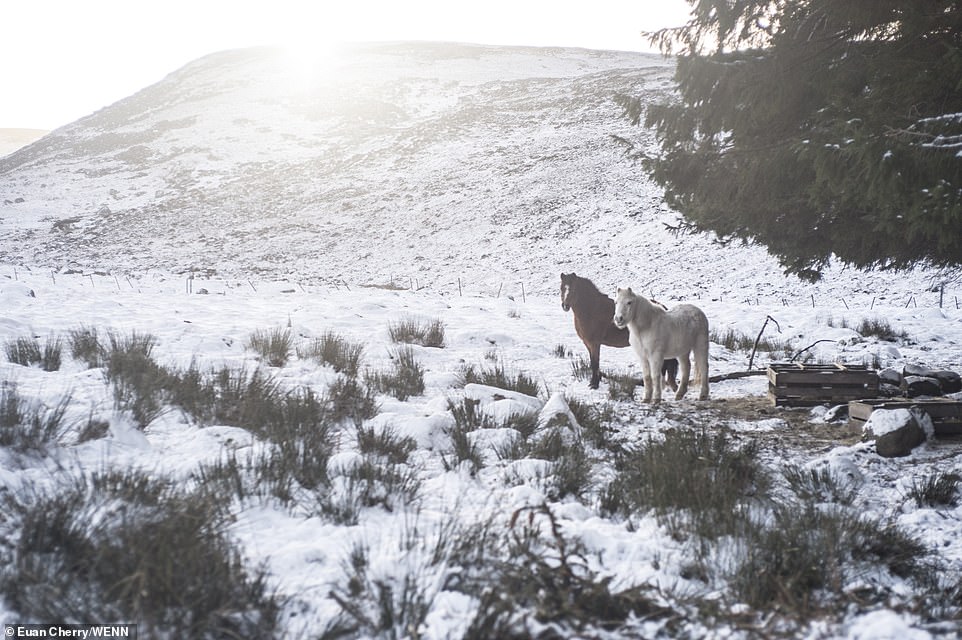 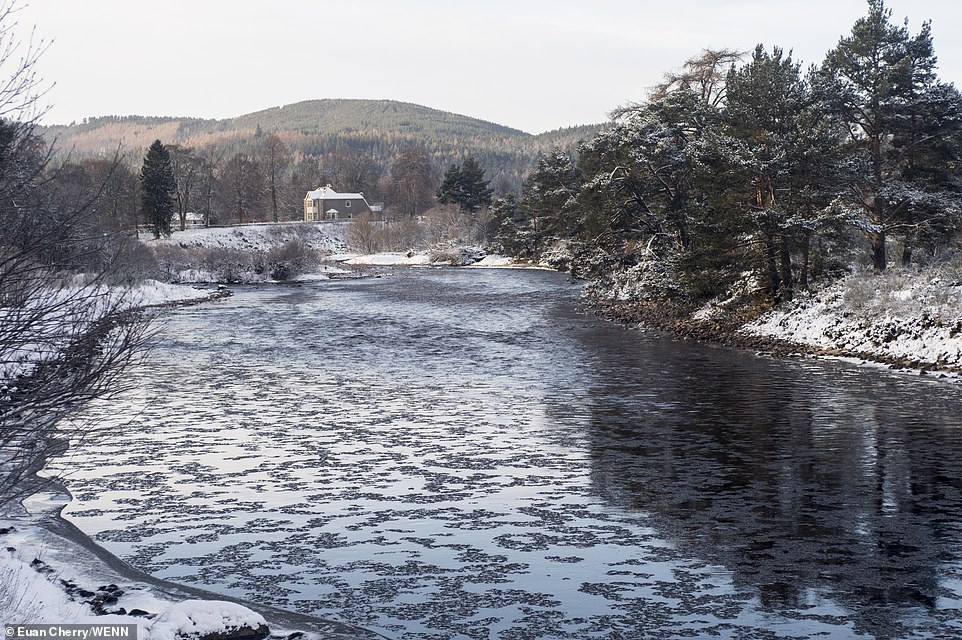 Water was frozen in patches in Aberdeenshire where the coldest temperature of the year so far was recorded at -10.8C

Councils across the UK are getting ready for call outs and proactively trying to prevent any incidents on the road.

The LGA’s annual Winter Readiness Survey revealed 94 per cent have either more salt in stock for this year, or the same level as they did last year when the Beast from the East hit.

As well as an abundance of salt stockpiled, each council has an average of nine full-size gritters, alongside other equipment, the LGA survey showed.

Highway teams are monitoring state-of-the-art weather forecasts with highly-trained staff on standby around the clock and some already deployed to grit thousands of miles of roads whenever temperatures plummet.

To cope with ongoing funding pressures and limited resources, more than half (55 per cent) of councils will share salt stocks, 30 per cent will share gritting machinery, and one in five (22 per cent) plan to team up across their boundaries to send staff to key locations.

Forecasts of a prolonged cold spell also prompted Public Health England to issue advice on keeping warm and keeping an eye on vulnerable relatives and neighbours.

But it was accused of being patronising and treating people ‘like idiots’ after publishing suggestions on its blog that included ‘moving around’ and ‘wiggling fingers and toes’.

An NHS England North spokesman said its tweet was a slip-up and ‘does not reflect official NHS advice’. She added: ‘This advice was given to frail and elderly people when the Beast from the East struck last year and posted in error.’

There seems to be no danger of the Beast returning just yet, but the Met Office said more snow is expected over the weekend because of a succession of weather fronts from an area of low pressure attempting to move eastwards and hitting cold air. 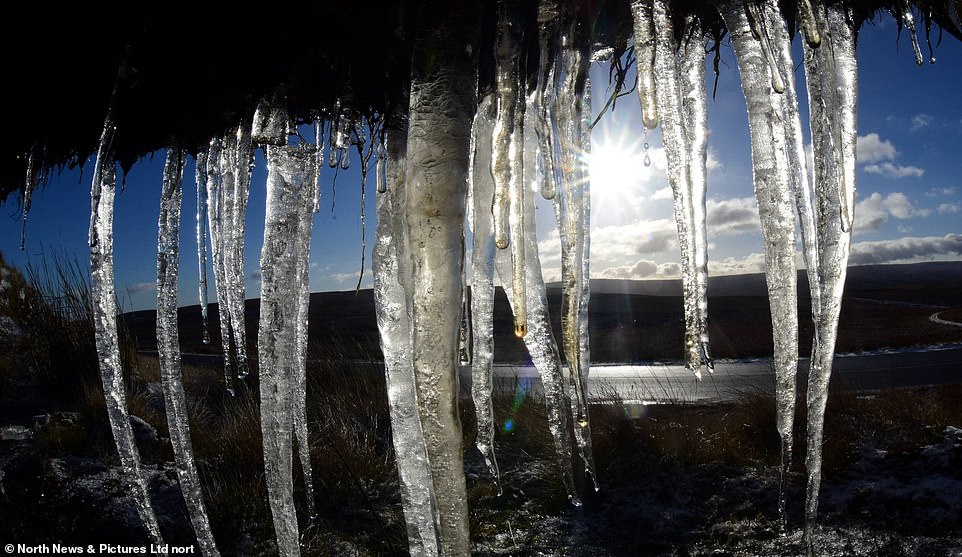 Freezing temperatures overnight led to snow and frost on the ground this morning. Icicles were pictured in County Durham on Friday 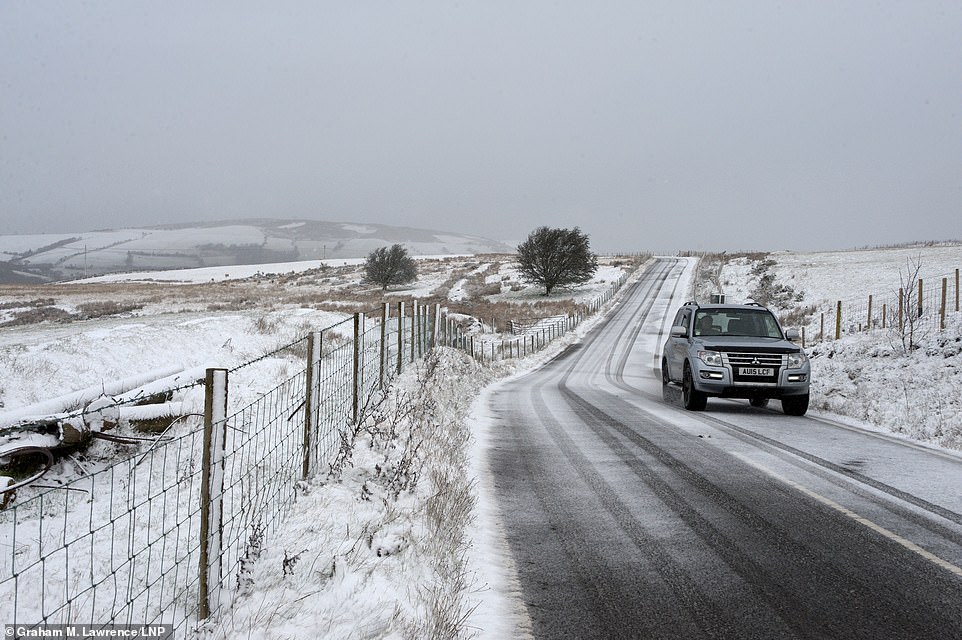 Britons are now bracing themselves for another two inches of snow today amid fresh ice warnings from the Met Office.

As well as the ice and snow warning on the east coast, meteorologists have now put out a new yellow warning for snow in Wales on Friday.

A Met Office spokesperson warned that a band of rain pushing in the south west of England would turn into snow covering the Welsh hills and parts of the Pennines.

It is thought that on higher ground in the Chilterns, South Downs,  Dartmoor and Exmoor there could be snow going into the weekend.

Severe warnings have been put in place as a blast of Arctic air sweeps across the UK, cutting daytime highs in half from around 11C to 5C, bringing an end to the recent mild conditions and heralding a new spell of wintry weather.

Forecasters said A-roads were likely to be affected by treacherous travel conditions, with longer journey times expected by both bus and train, causing Britons to joke about the impending ‘snowmageddon’ on social media.

The worst affected areas have been in northern England and Scotland, where snow has settled across the Western Isles, and forecasters expect up to 1.6in (4cm) over the Highlands and Grampians.

Met Office spokeswoman Nicola Maxey said the snowfall is the first at lower levels for 2019 and also marks the first cold spell of the year, with the mercury across much of Britain set to stay in single figures throughout the day. 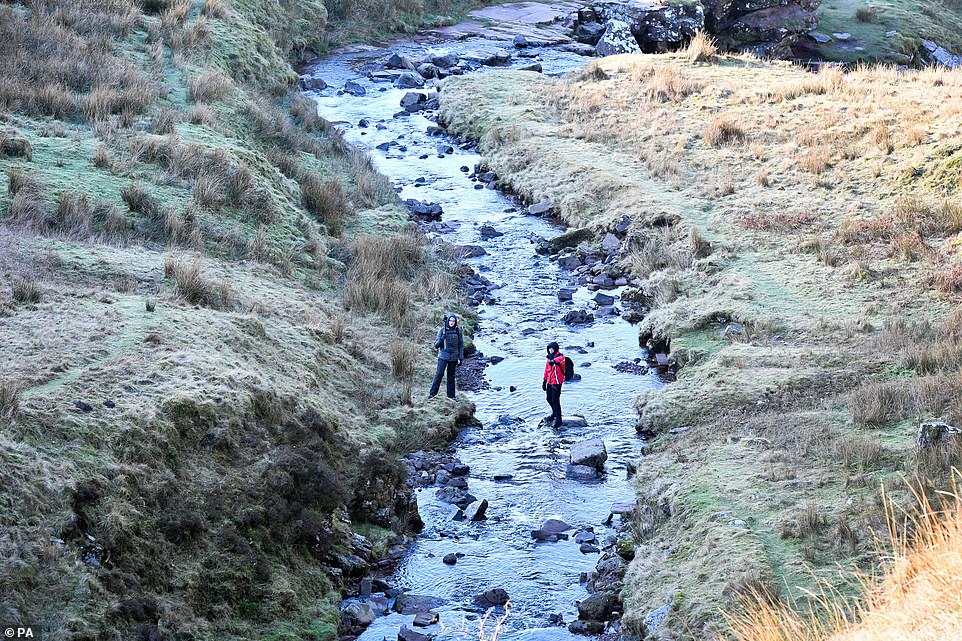 She said: ‘What we have had is a band of showers that have amalgamated, and that has brought a bit of heavier snow for a short period in Newcastle. And that band of showers is going to move down the coast.

‘That band will move south throughout the day, bringing some heavier showers, and we are looking at accumulations of maybe 1cm-3cm – but short-lived. So it is not going to hang around for a long time.’

Ms Maxey said the band, as it gets further south and progresses down the coast, is more likely to bring hail rather than snow to parts of East Anglia.

So far, falling snow has been seen in parts of London, Nottinghamshire, Lincolnshire and in the North East of England, where images show a white blanket on Tynemouth beach and Whitley Bay after snowfall of between 1cm-3cm (0.4in-1.2in).

Ms Maxey said 4cm (1.6in) of snow has been recorded in Aboyne, Aberdeenshire, and that the weather for this time of year across the UK is ‘fairly typical’.

While this is average for the time of year, Met Office forecaster Bonnie Diamond said the contrast after such a mild January will have people reaching for warm coats: ‘We’re going to really feel the switch to colder temperatures.’

The Met Office said there are signs cold air from the east could make its way to the UK until the end of the month, but it does not automatically mean the return of last year’s Beast from the East which brought heavy snow.

Forecasters predicts ‘cold conditions are likely to remain for the rest of January’. A ‘cold but changeable’ outlook remains likely until mid-February, they add, with ‘spells of strong winds and rain, turning to snow at times’.

Met Office chief meteorologist Dan Suri said: ‘From Thursday colder arctic air will have spread across the country, with temperatures struggling to reach above 5C or 6C for most of us.

‘This is close to the average January temperature for the UK – but since it has been quite a mild winter so far, many will notice the difference by the end of the week. It’s going to feel very cold overnight with temperatures widely dipping close to or below freezing.’

‘The colder weather will bring a range of winter hazards, with a widespread frost and icy stretches expected from Wednesday night and continuing into the weekend.

‘Not a lot of snow is expected during this period, though we will see snow showers in some areas during Wednesday night and Thursday.

‘Most of the snow showers will be over the hills and mountains, although snow could fall to lower levels in the north, and also some eastern parts of the country during Thursday.’

Dr Emer O’Connell from PHE said: ‘Experience shows us that every winter thousands of people are seriously affected and even die from illnesses linked to the cold. Protecting yourself from the cold may seem like common sense but many people don’t manage to keep themselves warm enough. 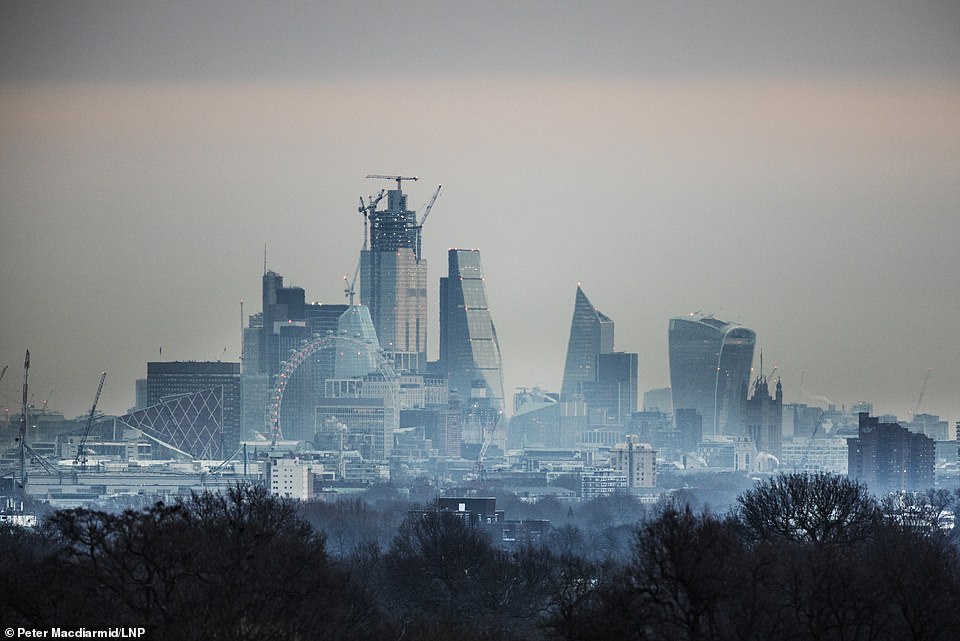 ‘If you know someone at risk, someone over 65, anyone with dementia or a heart and lung condition, or a young child, check up on them and see if there’s anything you can do to help.

‘All of us should be heating our homes to at least 18C, keeping up to date with weather forecasts and planning our days around them – simple steps can really help protect against the cold.’

Looking further ahead, Mr Suri said: ‘Next week’s forecast shows signs of a reduction in winds from our typical westerly direction, meaning we are more likely to see cold winds from northerly and easterly directions later in the week.

‘This does not guarantee a repeat of ‘Beast from the East’ conditions as some media are speculating – yes, it is getting colder, but it is too early to provide detailed forecasts on the potential severity of the weather or snow amounts at this stage.

‘We advise the public to keep in touch with Met Office forecasts and warnings over the next few days and weeks so you can be prepared for the cold weather.’