NHS will fund ‘drunk tanks’ over the festive period

The NHS will fund ‘drunk tanks’ over the festive period to relieve pressure on emergency services and keep intoxicated patients out of A&E.

Up to £300,000 will pay for dozens of alcohol recovery units run by charities, councils and voluntary groups, in conjunction with ambulance trusts.

The ‘tanks’ are often fitted with recliner beds for binge drinkers to sleep off the worst effects, while those who are dangerously inebriated may be treated with IV drips and stomach pumps. They are designed to keep hospitals free from the drunken revellers who can overrun A&E and ambulance services at the busiest time of the year. Simon Stevens, the chief executive of NHS England, said the NHS was not the ‘national hangover service’ and should be preserved for those most in need of medical help.

But, while the scheme might help fulfil that aim, it does also mean that NHS funds will be used to nurse overindulgence.

Ambulances were diverted 30 times last week because A&E departments were full, with one in nine left waiting up to an hour during patient handovers.

Dr Nick Scriven, president of the Society for Acute Medicine, warned it will ‘require a near superhuman effort’ to keep the system safe for patients over winter. NHS figures show alcohol is responsible for around one in seven emergency admissions, placing a huge strain on an already stretched service.

This peaks on Friday and Saturday evenings, when up to 70 per cent of attendances can be alcohol-related.

It is also a leading cause of aggression against NHS staff, with the number of physical assaults recorded on ambulance workers increasing by a third since 2013/14. 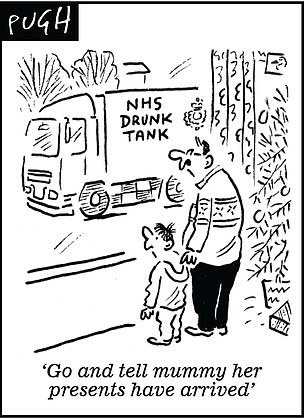 A poll of GMB union members reveals almost one in three health service staff fear being attacked at work today – traditionally the busiest of the year for staff parties.

Mr Stevens said: ‘I have seen first-hand… the problems that drunk and often aggressive people cause paramedics and A&E staff who just want to help those who need it most.

‘NHS does not stand for “National Hangover Service” which is why we want to help other organisations take care of those who just need somewhere safe to get checked over and perhaps sleep it off.’

The Alcohol Intoxication Management Services (AIMS) are already being used by a number of local authorities including in Blackpool, Exeter and Norwich.One of the first programmes to benefit from the new funding will be the Soho Angels scheme in London, run by Westminster council and the LGBT Foundation.

Mr Stevens also urged local authorities to make more use of the ‘late night levy’ which they can impose on bars and clubs to provide safe spaces for drinkers.

Writing in the British Medical Journal, Devon County Council’s Tracey Polak and Virginia Pearson said depictions of wine and beer on greeting cards ‘undermine public health messages’ and ‘normalise’ heavy drinking. ‘They reinforce this as a social norm,’ they wrote, adding that Britons send an average of 33 cards per year.

But sociologist Professor Frank Furedi, of Kent University, dismissed the concerns. ‘This is typical of the puritanical, mean-spirited approach to everything,’ he said.