This decade began with David Sullivan, David Gold and Karren Brady buying West Ham United and promising ‘stability’, alongside a ‘seven-year plan’ to get into the Champions League.

It ends with another manager sacked and the embarrassment of a player having crashed his £210,000 Lamborghini into a family’s home while dressed as a snowman on Christmas Day.

Not even the scriptwriters of Gavin & Stacey — the sitcom that returned to our screens last week after 10 years away — could have come up with such a silly storyline.

Manuel Pellegrini’s year and a half in charge has been a car crash in itself, with West Ham entering 2020 sitting 17th in the Premier League despite an outlay of £175million.

Eight of the 11 starters against Leicester City were players signed under the so-called Charming Man, with Arthur Masuaku, Declan Rice and Manuel Lanzini the only exceptions.

He was hired to bring the good times back; to use his expertise to guide them into Europe. He was a title winner, a big name, but ultimately a failure.

Players describe Pellegrini as a ‘nice, easy-going guy’ who exudes serenity. He is not a shouter. He simply asked they meet his three ‘non-negotiables’ — respect, commitment and performance. 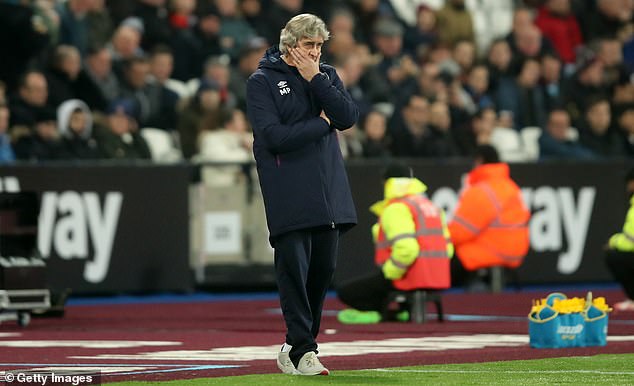 Pellegrini is described as a ‘nice, easy-going guy’ but could not inspire his players on the pitch

The trouble is, this made their Rush Green training ground feel a comfortable environment.

There was no edge. Too often it was left to captain Mark Noble to tell a few home truths. Communication, or a good old verbal kick up the backside, was not Pellegrini’s strong suit.

Where was the discipline? Felipe Anderson got away with not tracking back. Michail Antonio smashed up a Lamborghini, then was selected to start against Crystal Palace the next day. There will be none of that under David Moyes, who dropped Antonio from a squad to face Palace in January 2018 because he turned up late to a team meeting.

There were question marks over how much homework Pellegrini was conducting on his opponents, too.

On Saturday he went through his regular post-match routine after losing to a team of Leicester reserves. He spoke to the BBC, the radio reporters, staged a tense press conference.

Then before heading back to the London Stadium’s changing room, Pellegrini was summoned upstairs, where he was apparently told of his fate by the club’s vice-chair Brady.

For West Ham, they are going for familiarity. Moyes is now tasked with sorting out his predecessor’s mess. He has been given a longer deal than his last one, though he may not get as much money to spend.

A significant reason why Pellegrini was told to pack his bags was transfers.

The 66-year-old Chilean was putting pressure on Sullivan to sign another striker in January, with Sebastien Haller so underwhelming since arriving.

Pellegrini wanted Gabigol, the 23-year-old Brazilian on loan at Flamengo from Inter Milan, among other targets. Sullivan was unhappy — Haller cost him a club-record £45m.

The club also wanted to get rid of Mario Husillos, the director of football who hired his son Mario Jnr as a senior scout. The signing of Roberto, one of the most hapless goalkeepers ever seen in the Premier League, was deemed reason enough.

But Pellegrini objected to the dismissal and there were concerns inside the boardroom about going over their manager’s head when he might respond by downing tools.

Saturday’s defeat — this time courtesy of goals from Leicester’s Kelechi Iheanacho and Demarai Gray — was the final straw.

Pellegrini spoke to reporters at 8.06pm. By 8.55pm, his sacking was confirmed on the club’s website. Husillos followed him out of the club yesterday.

Moyes knew this was on the cards — the Scot has been doing his homework in anticipation of being offered a job, attending multiple games and jotting down notes in recent weeks. 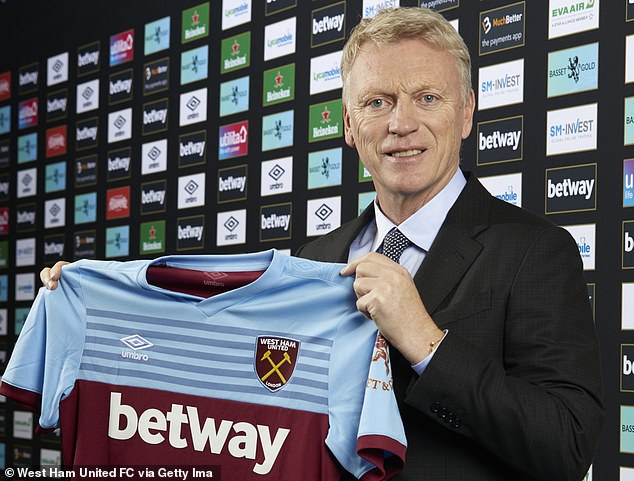 The 56-year-old has always maintained he wants a minimum 18-month deal.

He has his naysayers among the fanbase but Sullivan sees Moyes as a safe bet for survival.

West Ham started January 2010 in 17th in the Premier League, and they now sit 17th again. Pellegrini is out, Moyes is in, let’s see where they are in another decade’s time.