French politicians lined up to demand tougher action against Islamist terrorism today after three people were murdered by a knifeman in Nice.

The triple murder is the latest in a long line of terror attacks in France in recent years, including the Charlie Hebdo massacre in 2015 and the beheading of a school teacher two weeks ago after he displayed some of the magazine’s cartoons.

Nice’s mayor Christian Estrosi said today that ‘enough is enough… it’s time now for France to exonerate itself from the laws of peace in order to definitively wipe out Islamo-fascism from our country’.

One of Emmanuel Macron’s party colleagues called for ‘total mobilisation’ against extremism in what another called a ‘war that the Islamists are waging on our nation’.

Within hours of the Nice attack, a gunman had been shot dead by police in Paris while a knifeman was arrested for attacking a guard at a French consulate in Saudi Arabia.

Speaking in parliament, where he had earlier been talking about France’s new lockdown, Castex said the Nice attack was ‘as cowardly as it is barbaric’.

French anti-terror prosecutors have opened an inquiry into what mayor Estrosi called an ‘Islamo-fascist attack.’

Estrosi, a member of the conservative Les Republicains party, called for churches around the country to be given added security or to be closed as a precaution.

David Lisnard, the conservative mayor of Cannes, called for a ‘fierce and cold determination to eradicate this plague’ after an ‘abominable Islamist attack’.

‘The action against Islamist fanaticism must be methodical, flawless, adamant, relentless,’ Lisnard said.

‘More than ever, we must defend France and our values, and also our civilization. Because the fight is civilisational.’

Members of Macron’s LREM party also joined the call for a tough response today, with MP Sacha Houlié saying that ‘our mobilisation against Islamist terrorism is total’.

‘The unity of the country, the defence of the rule of law and of our common ideals is absolutely necessary,’ he said. 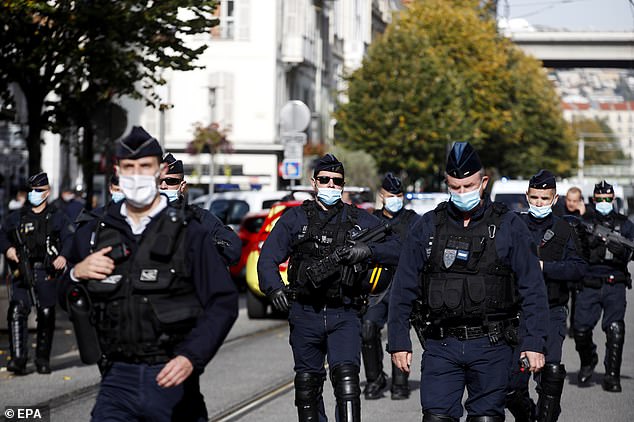 ‘These Islamist terrorists will not have the war of civilisation that they seek,’ Ahamada said.

Another LREM lawmaker, Sophie Beaudouin-Hubiere, called for France to ‘stand united and determined to fight’.

‘It is a war that the Islamists are waging against the [French] nation, against each of us,’ she said, referring to previous attacks including the 2015 Bataclan massacre.

In the wake of Samuel Paty’s murder earlier this month, the French government shut down a Paris mosque and raided other Islamic associations.

Macron has vowed to stamp out extremism in France but his staunch defence of the right to publish blasphemous cartoons has drawn anger in the Middle East.

‘I can only denounce as strongly as possible this act of cowardice against the innocent,’ he said.

Zekri called on French Muslims to cancel festivities to mark Mohammed’s birthday, which end on Thursday, ‘in solidarity with the victims and their loved ones.’ 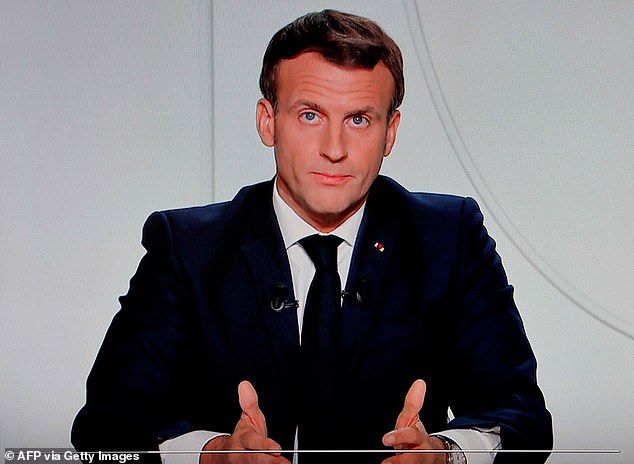 There was also condemnation of today’s attack from abroad, with UK prime minister Boris Johnson saying he was ‘appalled’ by news of a ‘barbaric attack’.

‘Our thoughts are with the victims and their families, and the UK stands steadfastly with France against terror and intolerance,’ the PM said.

Angela Merkel’s spokesman said the German chancellor was ‘deeply shocked about the gruesome murders in a church in Nice’.

Italy’s prime minister Giuseppe Conte condemned a ‘vile attack’ but vowed it ‘will not shake the common front defending the values of freedom and peace.’

The attack it comes amid anger at France from across the Islamic world after president Macron staunchly defended the blasphemous Mohammed cartoons which led to the teacher’s beheading.

Turkey has led the confrontational rhetoric with France after Charlie Hebdo magazine published an offensive cartoon of its president Recep Tayyip Erdogan.

Erdogan called the cartoonists ‘scoundrels’ and accused the West of wanting to ‘relaunch the Crusades’ by attacking Islam after the image appeared on the front of this week’s magazine.

Iran’s president Hassan Rouhani also took aim at France by warning that insulting the Prophet would encourage ‘violence and bloodshed’.