Nick Gordon is arrested for violating a no contact order

Nick Gordon has been arrested for violating a no contact order banning him from going near the on-off girlfriend he has repeatedly been accused of beating, DailyMail.com can reveal.

Gordon, who was found legally responsible for the death of Whitney Houston’s daughter Bobbi Kristina Brown in a 2016 civil suit, was booked into jail in Sanford, Florida, just before midnight.

Deputies had received an anonymous call alerting them that he was spending the night with Laura Leal, 26, despite a judge ordering them to stay apart.

Gordon, 29, was slapped with the no contact order following his previous arrest on March 10 for allegedly punching Leal in the face and pulling her hair as they drove home from a bar.

Nick Gordon, was booked into jail in Sanford, Florida, Monday night for violating a no contact order banning him from going near the on-off girlfriend he’s been accused of beating 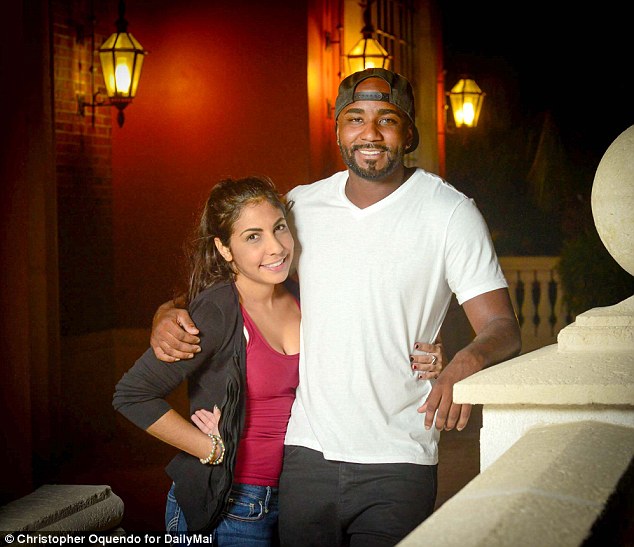 Gordon, 29, was slapped with the no contact order following his previous arrest on March 10 for allegedly punching his on-off girlfriend, Laura Leal, in the face and pulling her hair as they drove home from a bar. (Gordon and Leal above)

Officers had found Leal with a busted lip after arriving at Gordon’s home following a late night disturbance and nabbed him for battery domestic violence.

She later refused to press charges and even wrote to the judge asking for the order to be rescinded because she supposedly wasn’t ‘in any kind of fear or danger’.

However the order remained in place Monday night ahead of an April 6 court appearance and when deputies acted on the tip off they found the couple together at Gordon’s home.

Online records confirm Gordon was booked into the John E. Polk Correctional Facility on a charge of violating pre-trial conditions for his domestic violence case and ‘may not be bailed’.

It is the third time Gordon has ended up inside the same jail since he and Leal began dating one year ago.

Each incident has followed a familiar pattern, with Leal making shocking domestic violence allegations only to later withdraw them claiming her temper and bi-polar is to blame.

Friends say the petite brunette is being brainwashed by Gordon who manipulates her into blaming herself for their explosive, booze-fuelled fights.

‘He is trying to set Laura up as the aggressor but she does not see it,’ a concerned pal told DailyMail.com.

‘She believes that if he hurts her it’s her fault. This guy is a devil dressed as an angel.’

Gordon became notorious for dating Bobbi Kristina, who died in 2015 after she spent six months in a coma having been found unconscious in a bathtub.

He has never faced criminal charges but was sued by Brown’s estate, accused of causing her wrongful death by giving her a ‘toxic mixture’ of drugs as well as stealing from her bank account while she was comatose. 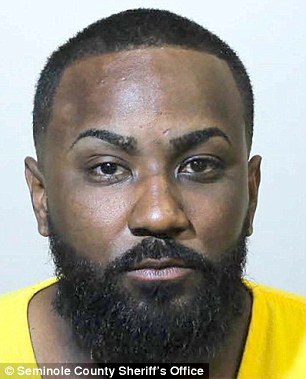 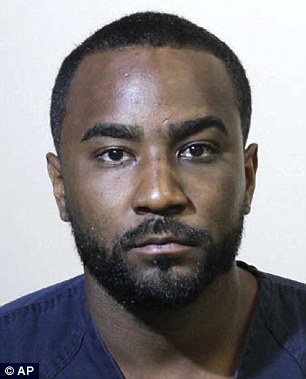 Gordon has previously been arrested for allegedly beating Leal. He was booked at earlier this month (left), and he was arrested for battery against Leal in June (mugshot right)

When neither he, nor his lawyer, showed up at a hearing in November 2016, a judge in Fulton County, Georgia ruled against him by default and ordered him pay $36 million in damages.

Gordon was first arrested for attacking Leal and holding her hostage during a violent episode at his mother’s house in June last year.

In an exclusive interview with DailyMail.com Leal said she fought for her life because she feared she would suffer a similar fate to Bobbi Kristina.

Leal described how Gordon pinned her to the bed during the hours-long attack and punched her head so hard she wondered if she was dead.

She said she was only able to escape when her ‘survival instinct’ kicked in and she smashed Gordon’s nose with a heavy candle before bursting into his sleeping mother’s bedroom to beg for protection.

Despite describing numerous instances where he allegedly bashed her head into a car window and choked her until she fell unconscious, Leal revealed in subsequent interview that the pair had reconciled.

She also claimed she had been the aggressor in the lead up to Gordon’s arrest and revealed she had petitioned the judge to have the charges dropped.

The next police involvement came March 10 of this year when officers were called to Gordon’s home for a possible disturbance and found Leal with a bloody swollen bottom lip, according to his arrest report.

Leal told authorities she had picked Gordon up from a bar and was driving him home when he punched her in her right cheek several times and pulled her hair. 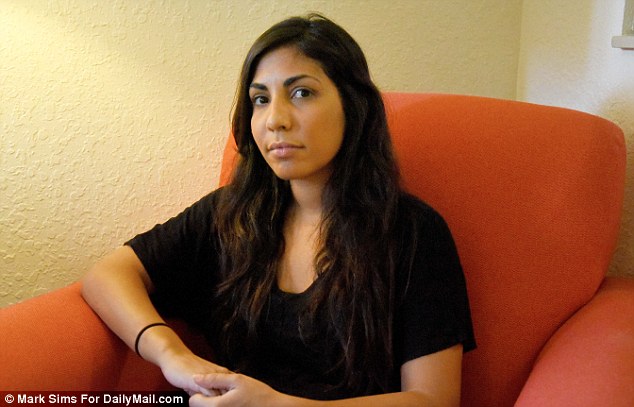 Gordon told the officer he just wanted his girlfriend to leave the home because she had gone ‘crazy, claiming she ripped his shirt and threw a bottle at him after the pair had been drinking.

Leal refused medical treatment and declined to press charges but the arrest was based on Leal’s injuries and her statement.

Gordon was given a bond of $500 and was released from custody on the basis he didn’t contact Leal.

In her letter asking for the no contact order to be dropped, Leal said of her injuries: ‘In reality my lips were chapped and dry. It was in no way due to any kind of harm or hit.’

She went on to say Gordon was not at fault and she was entirely to blame for the dust-up.

‘I suffer from severe anger issues in which Nick has been an incredible support to get my act together,’ she writes in the letter, obtained by celebrity news site Blast.

‘I am responsible for what happened that night and want you to know what a great person Nicholas truly is.

‘When I have episodes, he helps to calm me down and prevents me from doing anything that could make things worse.’

Gordon’s latest brush with the law comes just weeks after Bobbi Kristina’s father Bobby Brown came out and shockingly said he wanted to see him locked up and ‘raped’.

‘He’s still walking around free,’ Brown raged. ‘If he was locked up somewhere where somebody can rape him, that’s just how I feel. He raped me by taking my daughter away.’ 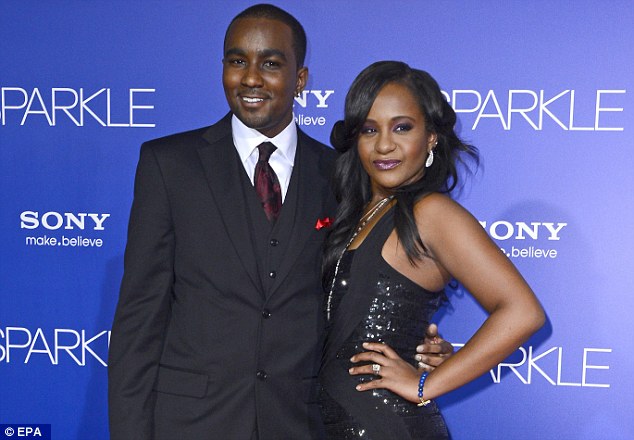 She spent the final six months of her life in a medically induced coma after being found unresponsive in a bathtub at her Georgia home.

Bobbi Kristina’s body was found in her bathtub almost three years to the date that her mother Whitney was pronounced dead after suffering a similar fate while staying at the Beverly Hilton prior to the 2012 Grammy Awards.

It was Gordon who found and tried to resuscitate Houston in that incident as well, after he discovered her unresponsive in her bathtub just hours before she was due to attend Clive Davis’ annual Grammy party.

Eight months after her mother’s tragic passing, Bobbi Kristina announced she was engaged to Gordon, who was raised at times during his childhood by Houston and who many considered to be a brother-like figure to Bobbi Kristina.

The pair later claimed they had been married in early 2014, but Bobby Brown shot down those statements, saying the two had yet to wed.

The estate claims in their lawsuit that Bobbi Kristina’s death happened after Gordon had been ‘out all-night on a cocaine and drinking binge’.

Bobbi Kristina and Gordon argued after he returned home at around 6am on January 31 according to the lawsuit, with the two having it out for approximately 30 minutes while two other individuals – Danyela Bradley and Max Lomas – were at the home.

The estate claims in court papers that Gordon then ‘gave Bobbi Kristina a toxic cocktail rendering her unconscious and then put her face down in a tub of cold water causing her to suffer brain damage.’

Bobbi Kristina’s autopsy report showed that her face being immersed in water, along with drug intoxication, led to her death.

She was found to have morphine, cocaine, alcohol and prescription drugs in her body at the time her body was found in the tub.

The medical examiner could not determine whether her death was an accident, suicide or murder however, and ruled it ‘undetermined.’

In an interview with DailyMail.com after the release of Bobbi Kristina’s autopsy, a happy and smiling Gordon said; ‘I’m glad that s*** is all over.’

He then added; ‘I just want to wish my girl a Happy Birthday. I can’t say any more but it’s good.’