Nick Knowles came to the rescue of a hoarder mother and her family who had reached breaking point in last night’s episode of Big House Clear Out.

Mother Cheryl lives with her partner Robert and her daughters Tia and Cherys in a three-bedroom house in Suffolk that was filled to the brim with clutter.

Cheryl started hoarding after her divorce and the death of her father and grandfather in 2013, which led her to experience a mental breakdown in 2015.

Her hoarding had become an issue between her and partner Robert, who said he felt ‘miserable’ and would leave Cheryl if the situation didn’t improve.

After getting rid of half their possessions, the family were treated to a house makeover from Nick’s team of designers, increasing their house value from £185,000 to £220,000.

BEFORE: Mother Cheryl lives with partner Robert and her daughters Tia and Cherys in a three-bedroom house in Suffolk that was filled to the brim with clutter (pictured, the living room) 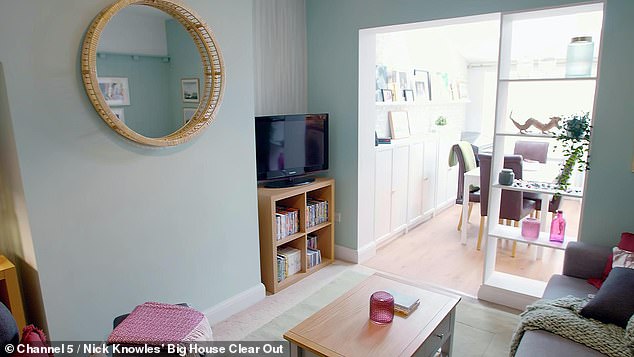 AFTER: After getting rid of half their possessions, the family were treated to a house makeover from Nick’s team of designers, increasing their house value from £185,000 to £220,000. Pictured, the living room is almost unrecognisable after the deep clean on the show 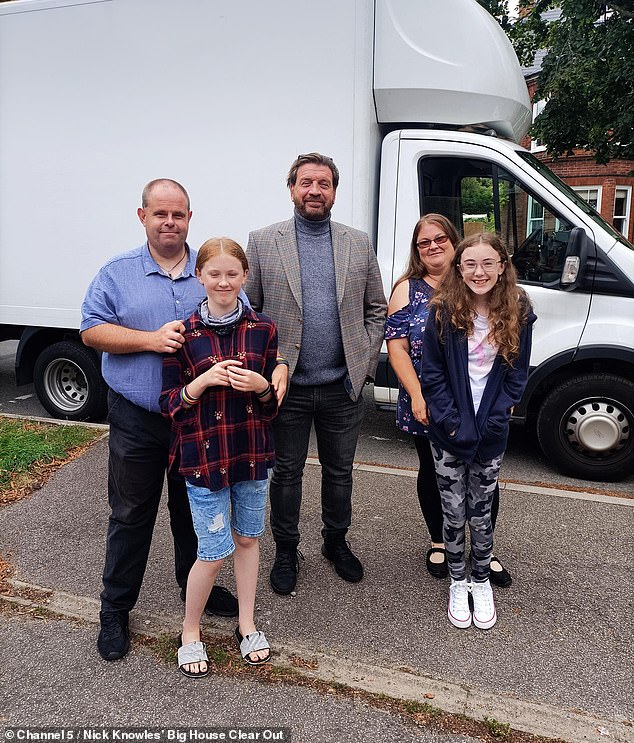 Helping hand: Nick Knowles came to the rescue of a hoarder mother and her family who had reached breaking point in last night’s episode of Big House Clear Out

On visiting the family’s home for the first time, Nick said it felt like they had squeezed the contents of a 10-bedroom home into their three-bedroom house.

The living-room, dining-room and spare-room were all filled to the brim with clutter packed away in plastic boxes, and there was no room to spend time together as a family.

Things were no better in Tia’s room, where she had also packed her clutter away in plastic boxes stacked so high they almost reach the ceiling.

There was no room to move or sit anywhere in the room, apart from Tia’s bed. 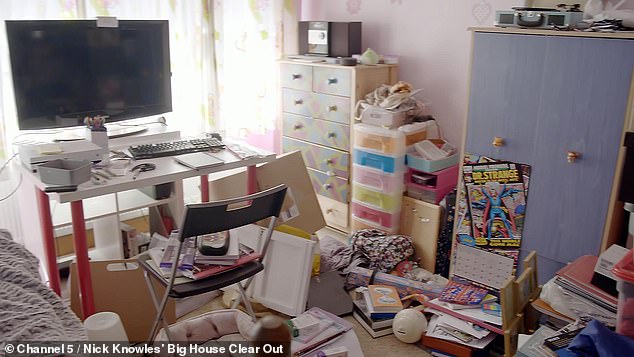 Tia, Cheryl’s daughter, also struggled to lete go of things and clutter had started to mount in her bedroom, pictured before 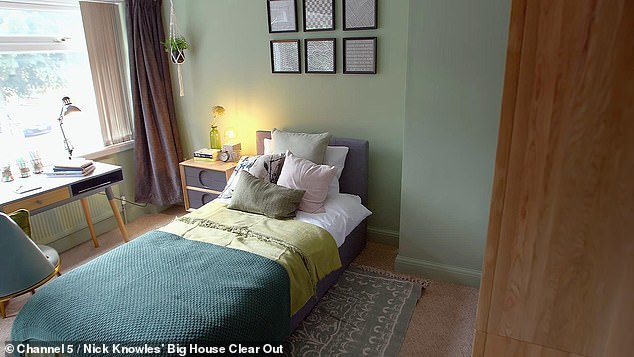 After the makeover, Tia’s room, pictured, looked much sleeker with a mint green paint job and a desk by the window

‘I’m a bit of a hoarder, but mum is definitely worse,’ a bashful Tia told the camera. ‘Its a lot of stuff that I got memories attached to.’

Meanwhile, Cherys room had been taken over by other people’s clutter, to the point where she could not reach her own desk to work on her art.

Admitting she needed help to get her house on track, Cheryl explained she started holding on to things after her divorce in 2013.

‘The house has become an absolute nightmare. I’ve been through a couple of things in the last few years and my priority has been my children. This has meant that the house has gone downhill and I need to get it sorted,’ she said. 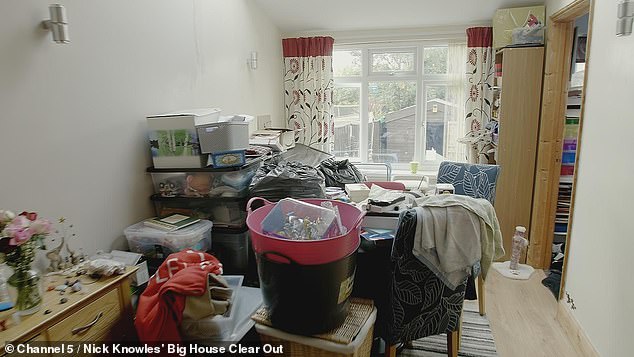 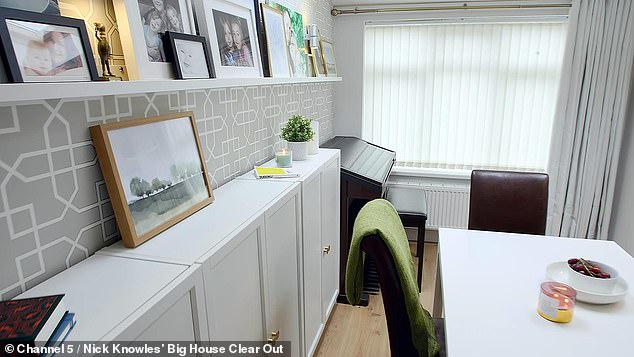 The design team changed the room to make it look longer and added storage so that the family wouldn’t have to worry about putting things away, pictured

She said this led her to experience a breakdown in 2015.

‘The only thing that kept me going was my local primary school where my children went,’ she said. ‘I used to help out there, I can forget about the house, put the mask on, forget the world.’

This is how she met Robert, who helped her through the tough time.

However, the house situation had become too much to bear for Cheryl’s partner, who said he would call it quits if things didn’t improve.

‘I’m usually a clean and tidy person, but living in a house like this is not much fun at all, I avoid it as much as possible,’ Robert said. 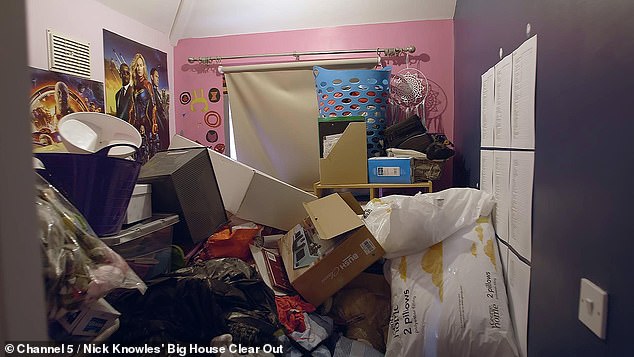 The spare room was full to the brim with clutter that no one in the family used, and Cheryl admitted she didn’t know everything that was in there, pictured

‘It makes me quite miserable. I just hide upstairs in the bedroom.’

Nick offered to renovate their house if they manage to get rid of 50 per cent of their belongings.

To start the process, the house was completely emptied and Nick placed all of their belongings in a warehouse, so they could see the space it took up.

Over the years, the family had amassed 205 plastic boxes, 55 bags for life, 204 soft toys and 672 books, with Nick noting ‘your storage solutions have become your problems.’

Cheryl, Tia, Cherys and Robert had to be strong through the week in order to get rid of the belonging they didn’t use.

Pictured: Tia’s room before. In an effort to be tidy, the family had put away their clutter in boxes, but they were still eating away at their space 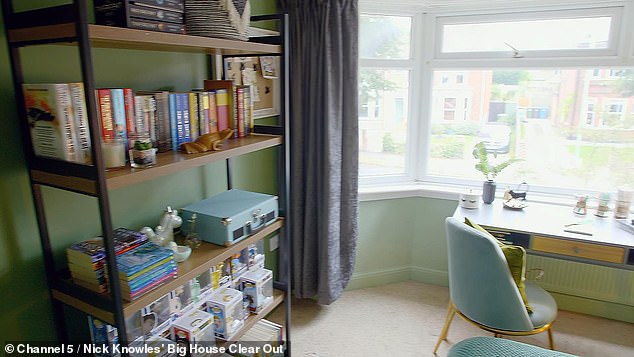 The sea of plastic boxes was replaced by a tidy book shelf and a desk, which was enough to house Tia’s belongings

Some items they were allowed to keep, while the rest had to be donated, sold, or thrown away.

One they were done decluttering, the family were able to see the makeover Nick’s team had been working on while they were in the warehouse.

The once-cluttered living room was painted mint green and turned into a bright, warm and inviting family space, which opened to the dining-room and kitchen.

‘I’m gobsmacked,’ Cheryl said, before adding ‘I can’t believe this our home.’ 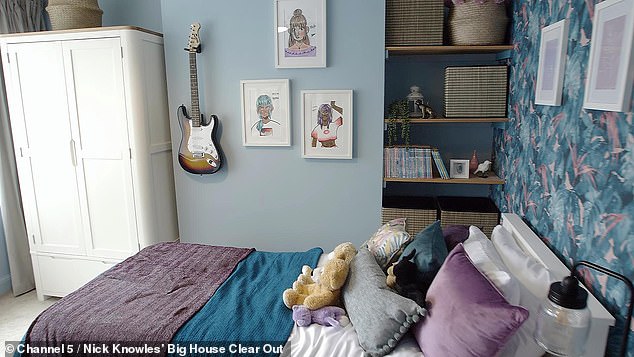 The team recycled Tia’s old bed into Cherys’ bedroom, which was fitted with floral wallpaper and painted baby blue

‘I could never have dreamt.. of doing anything like this, she added.

The teenager was delighted with the makeover of her own bedroom, which was freed all other people’s cluttter.

She could finally access her own desk, and the team had framed her drawings around the room.

‘Oh my god,’ she said. ‘It’s amazing, I have space and an actual desk,’ she said, before giving her room a ‘million out of ten’ rating. 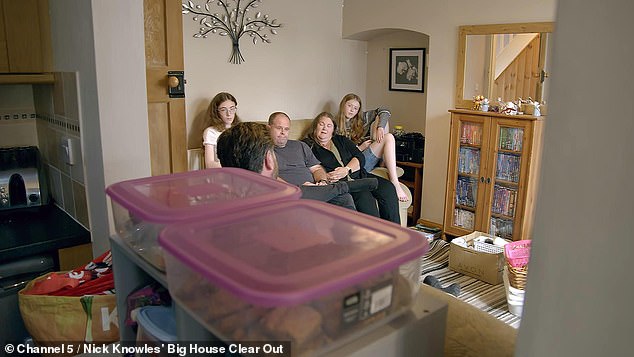 Before, the family had 205 boxes taking over their home and spent very little time together, pictured

Her older sister Tia’s room had also be redone, and she was equally happy with the space she could finally enjoy.

‘I love it, I’ve actually got a desk near the window, and lots of space as well,’ she said.

Cheryl said: ‘I just think this is the start of some wonderful memories and this is going to change our lives so much.’

‘It’s nice to see you so happy,’ she told Tia before giving her a hug.

Meanwhile, the spare room enjoyed its own makeover, to the great delight of Robert, who finally had a space where he could enjoy his train building hobby. The room also contained a cleverly hidden bed for guests.

Before the makeover, Cheryl and Robert’s house was worth £20,000 less than the average for similar houses in their area.

Overall, the family were all delighted with their new home, and Cheryl noted: ‘Before, it was our house but it was my home. Now it feels like it is our home. I keep thinking I’m gonna wake up and it’s all going to be a dream.’

‘I’m just so glad we’ve done this,’ she added, with Robert adding: ‘Forget the past, let’s start thinking about the future.

Nick Knowles’ Big House Clear Out airs on Thursdays on Channel 5 at 8pm.