‘Not everyone can be a Federer or Djokovic’: Nick Kyrgios insists he puts LESS pressure on his own game now after storming into Wimbledon’s third round… admitting ‘I’m OK with just enjoying myself, and putting on a show’

Like all of us, Nick Kyrgios has had a lot of time to think over the last 18 months. He has been thinking about who he is, what makes him happy, and where is his place in the tennis world.

And on Thursday night, after a performance of effortless power and charisma in a straight-sets defeat of Italy’s Gianluca Mager, he was ready to tell us all about it.

‘I feel like the public and the crowds have really embraced me and really enjoyed me being back,’ he said. ‘I feel like I’ve got a lot to offer for this tournament.

‘I just don’t put as much pressure on myself any more. When I was younger, it was hard to deal with all the criticism. “He should be doing this, he should be achieving this. He’s not doing this.”

‘It beat me down to a point of very bad depression. Like, I wasn’t even coming to Wimbledon and enjoying myself. I was not embracing this amazing event. Now I just enjoy it when I’m out there. I breathe in the fresh air. I don’t take anything for granted.

‘Not everyone can be a Federer or Djokovic. These are once-in-a-decade athletes that inspire millions of people. They’re just gods. 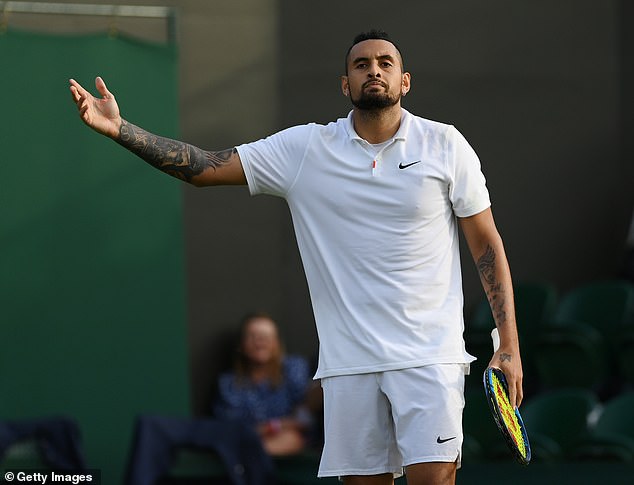 ‘You have to have some people, I believe, that are relatable, that can bring other fans to watch. I feel like I’m one of those people. Not everyone can be a Federer, a Djokovic or a Nadal. I’m Nick Kyrgios. I know who I am.’

Kyrgios is appearing in his first event outside his native Australia since the pandemic struck, and he seems to have become a 26-year-old man at peace with himself. He was even ready to anoint his successor as tennis’s greatest showman.

Alexander Bublik is a 24-year-old Kazakh who moves to the beat of his own heavy metal drum. The underarm serving, second-serve acing maverick beat Grigor Dimitrov 6-4, 7-6, 7-6 on Thursday and Kyrgios said: ‘He’s a hell of a player. The thing I love about him, obviously I see similarities with my game style, but just how he carries himself.

‘He’s his own man. He doesn’t take s*** from anyone. He’s going about his career the way he wants to. It’s good to see players like that, not conforming to what the sport wants you to play like. I feel like I’m an old soul on tour. It’s good to see another guy like that take my place when I do eventually go. All the tennis world: “Thank God, Kyrgios is gone”. You’re going to have to deal with Bublik now.’

But don’t imagine that the newly zen Kyrgios is any less eccentric or combustible on court. His bugbear this week has been the speed, of lack of it, of the grass courts and he delivered a lecture to the crowd: ‘Make it real grass! Jesus. For those of you who don’t know, on grass the ball is supposed to slide away, now it just pops up. Feels like I’m playing at Roland Garros.’ 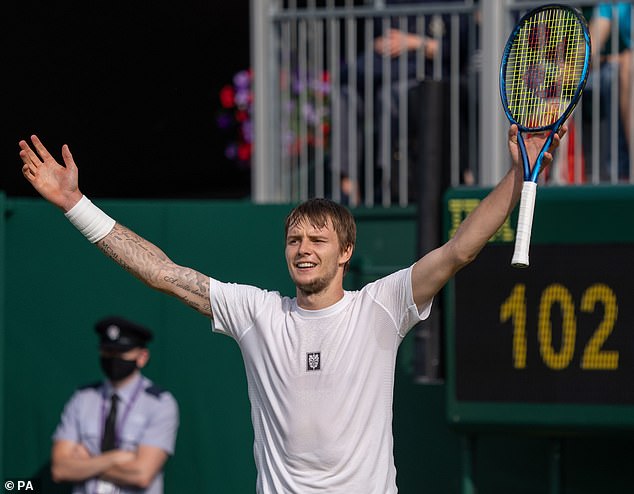 Slower the courts may be but they still allowed Kyrgios to fire down 29 aces on his way to a seriously impressive 7-6, 6-4, 6-4 win.

He struck up a rapport with one lady and on match point he asked her where to aim his first serve. She reckoned cross court was the way to go and she was right, earning a finger-wagging acknowledgement from Kyrgios and the winning ball to take home.

‘When they come to my matches, they know it’s a show,’ he said. ‘A couple of people were screaming out asking normal questions about Tottenham (Kyrgios is a fan). It’s crazy out there. I have people in the front row coaching me, telling me, “Good ball, great return, good depth”. I’m like, dude, what is going on out here?’

What is going on out there is the Nick Kyrgios show, and if his attitude off the court keeps his whiplash arm loose and lethal on it, then he could be selling out Centre Court a week on Sunday.