Liberal MP Nick Wakeling has rejected the extremist views held by his brother on social media.

On his public Facebook page Tim Wakeling can be seen calling himself a ‘former head gas controller’ and ‘crematory supervisor’ at Auschwitz.

But the Member for Ferntree Gully has spoken out against the views, saying he rejects them in the ‘strongest’ way, according to the Herald Sun.

Liberal MP Nick Wakeling (pictured) has rejected the extremist views held by his brother Tim on social media, such as references to the Holocaust

‘I firmly reject the views and comments of my brother in the strongest possible way,’ he told the publication.

He added: ‘Unfortunately, my brother and I have very different values and views.’

Wakeling’s Facebook page also bears several other crude references, including stating he went to the ‘school of Holocaust denial’.

In addition, his profile picture depicts a photo of Rudolf Hess, a German politician and former deputy to Adolf Hitler. 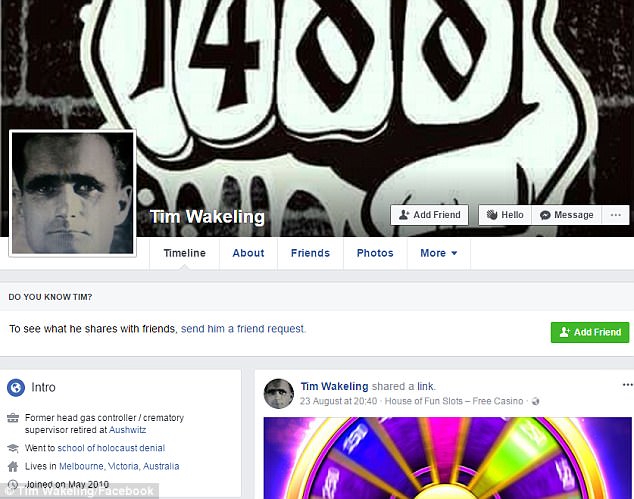 Tim Wakeling’s Facebook page bears several other crude references to the Holocaust, including a profile picture of Rudolf Hess, a German politician and former deputy to Adolf Hitler (pictured) 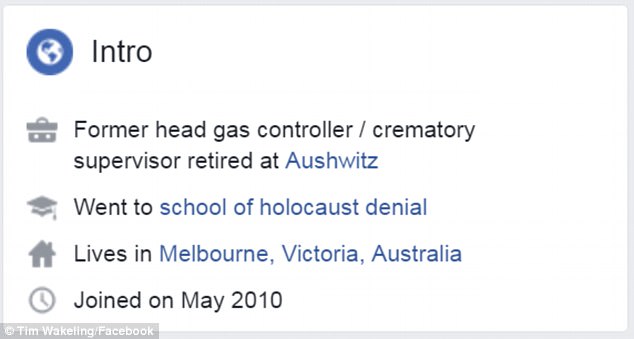 In comments made from the Facebook account, the ‘nationalist’ also threatened to allegedly ‘bash’ his MP brother if he did not scrap the Safe Schools program.

‘I threatened him a while ago if he didn’t do (axe Safe Schools) it I’d bash the f*** out of him,’ he said in a comment.

‘It’s good to have a politician as a brother I can smash him for poor policy but get away with the brotherly love excuse.’

In June, MP Wakeling vowed to cut the program, claiming it was about ‘pushing one person’s radical-Marxist ideology onto other people’s children’.

‘The Safe Schools name is so damaged in the Victorian community that parents no longer have any faith in the program and that’s why it needs to be scrapped,’ he said. 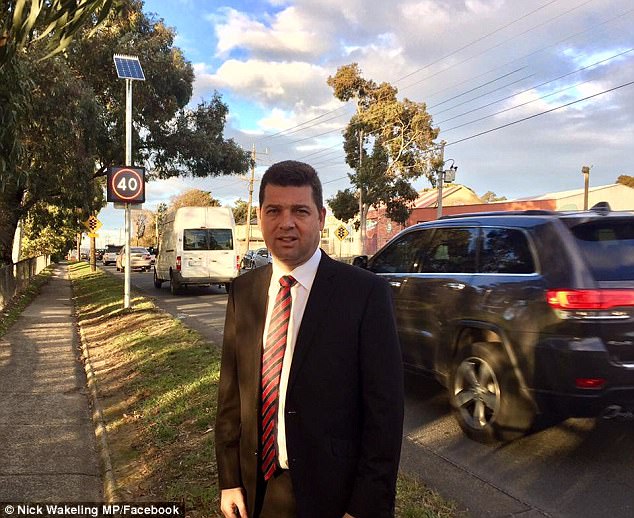 The Member for Ferntree Gully said he rejected his brother’s views in the ‘strongest possible way,’ after Tim’s comments also stated he would ‘bash’ him if he did not scrap the Safe Schools program