The TV cameras captured open-mouthed looks of horror. Gasps through the paddock. It was the moment Nico Hulkenberg somersaulted through the air and flames licked the back of the Renault in which he was trapped.

Yes, Lewis Hamilton’s victory at the Abu Dhabi Grand Prix, his 11th race win of the season, was accomplished serenely from pole, the perfect finale to the campaign of a lifetime so far. But the drama came much earlier, on the ninth corner of the first lap at Yas Marina’s bulb-lit track.

Hulkenberg and Romain Grosjean became entangled. Hulkenberg was sent spiralling into the air, doing one-and-a-half complete revolutions before nestling in the hoardings upside down. 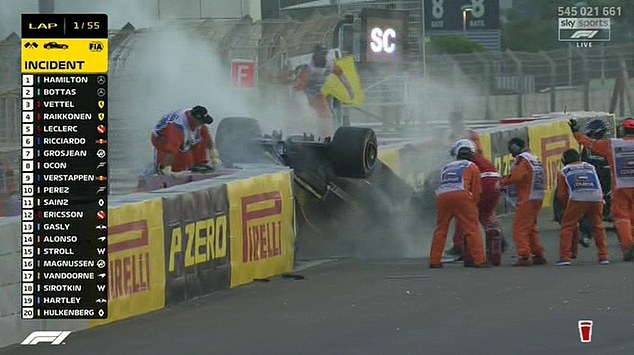 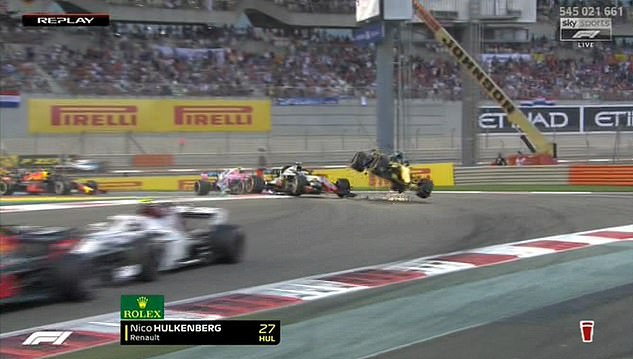 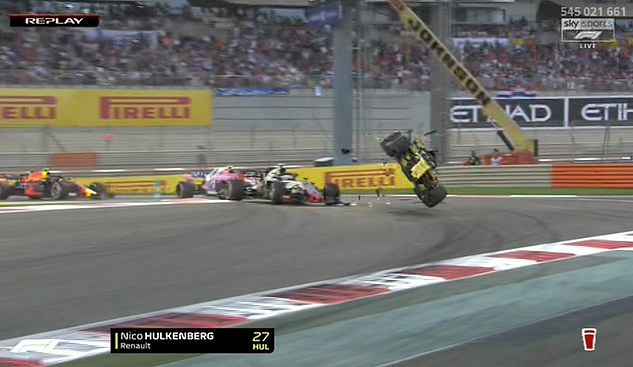 ‘I’m hanging here like a cow,’ said the German in panic over the team radio. ‘Get me out of this car. There’s fire.’

His pit-wall people sought to reassure him, saying: ‘They’re coming, they’re coming,’ citing the marshals scurrying to the scene.

British singer Sam Smith, watching with Spice Girl Geri Horner in the Red Bull garage, could be lip-read expressing his concern with a very forgivable expletive. Thankfully, the flames blew themselves out before the fire took hold and the 31-year-old was flipped the right way up and walked free some three minutes after going airborne.

Hulkenberg was able to take himself to the medical centre for a check-up, after which he was declared fit. He later waved to the crowd as the race continued. 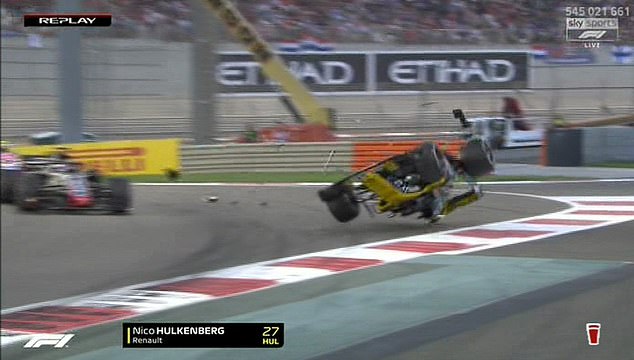 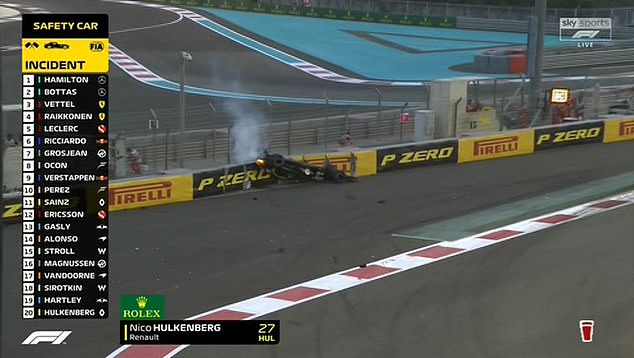 Hulkenberg said over the radio: ‘Get me out of here, there is fire’ as he hung upside down

‘It was not the most comfortable situation to be in,’ said Hulkenberg, who reported not a single bruise. ‘There was also a little barbecue at the back, so I just wanted to get out. You feel pretty helpless, but the marshals did a good job.’

Would Hulkenberg have been able to free himself from the cockpit but for the three-pronged halo safety device introduced on cars this season?

‘I don’t know to be honest at the point if the halo blocked me or not,’ he said. ‘I was hanging 30 centimetres off the ground and had the barrier behind me, so maybe there wasn’t much I could have done in any case, halo or no halo.

‘That was the first time for me having the car on the roof so I was sitting tight waiting for them and they reacted quickly.’ 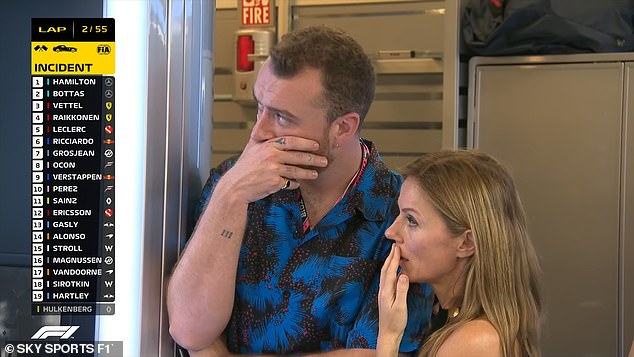 Hamilton’s win was aided by Kimi Raikkonen, in his final race for Ferrari, breaking down on the start straight, promoting a virtual safety car period while his machine was moved. Mercedes smartly seized the moment to whip Hamilton in for a ‘free’ change of tyres while the race was anaesthetised.

He retook the lead on the 37th of 55 laps when the rest had also been reshod, the victory never in doubt. Ferrari’s Sebastian Vettel was second. Red Bull’s Max Verstappen — after duelling hard with Esteban Ocon, who cost him the win a fortnight ago in Brazil, and then with Hamilton’s team-mate Valtteri Bottas — finished third.

Fernando Alonso, in his last Formula One race, signed off with 11th. Urged to claim a point by his pit wall, Alonso said testily: ‘I already have 1,800 points.’ To which Will Joseph, his race engineer, responded: ‘Well, try to make it 1,801.’ In fact, Alonso finished the race where he had started it: on 1,899 points. 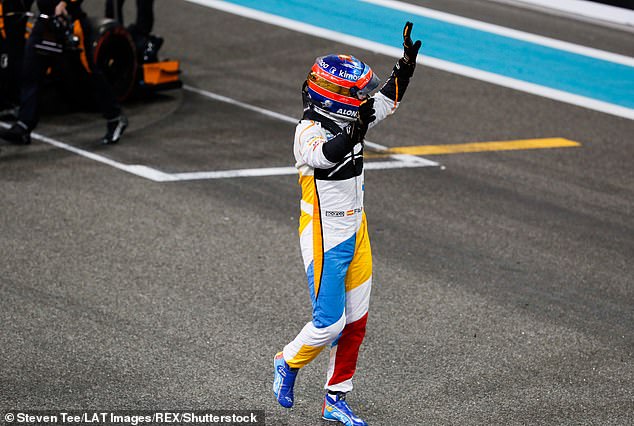 Fernando Alonso, in his last Formula One race, signed off with an 11th placed finish

Actor Will Smith cheered Hamilton on. Earlier the pair had recorded a playful video in which Smith held the world champion ‘hostage’ and begged him to give up his seat so he could race in his place. ‘I’m black, you’re black,’ said Smith. ‘Nobody will notice.’

Hamilton, who finished the season a towering 161 points ahead of Bottas, was all smiles. ‘Will is the original hype man and he brings a lot of energy,’ said the five-time champion afterwards. ‘He is really like a big brother to me.

‘We were doing filming literally 10 minutes before I got in the car, which I never do because that’s when I am usually getting ready.

‘So, going into the race, I was like, ‘Jeez, I have completely changed my pattern’.’

Hamilton peeled off his overalls to his waist on the podium and turned his back to the crowd in celebration. His giant cross was revealed — hardly in tune with local religious sensitivities.

The champion said his real intention was to highlight the inked inscription that reads: ‘Still I rise.’ Which, with eight wins in 11 races, is a sentiment that can hardly be denied. 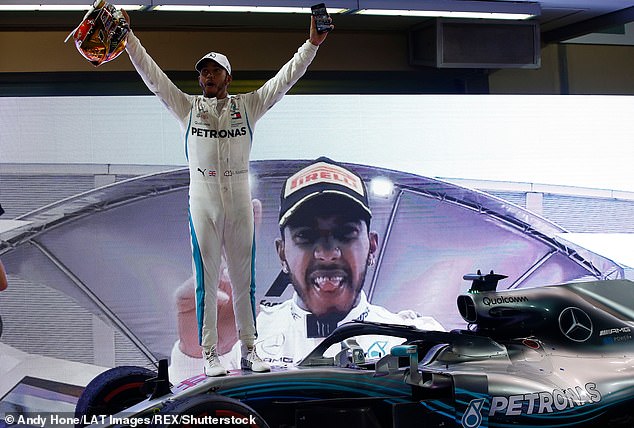 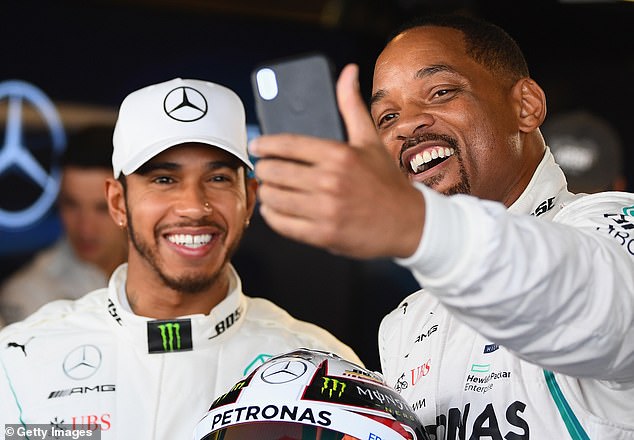