A vaccination centre has been forced to turn people away because of ‘massive’ queues and chaotic scenes inside.

Staff at the Leith Community Treatment Centre, Edinburgh, refused entry to at least ten people on Monday, citing a surge in people seeking jabs following the introduction of the vaccine passport scheme.

Revellers will now need to show proof they have had two coronavirus vaccines to enter nightclubs, gigs and other large events.

It comes as users blasted the ‘chaotic’ and farcical rollout of Scotland’s controversial vaccine passport scheme, and Nicola Sturgeon was forced into a grovelling apology over its tumultuous launch.

NHS Lothian said high turnout for multiple programs – including jags for teenagers, third doses for the clinically vulnerable and flu shots for the elderly – were behind the increased pressure on services.

A 23-year-old, speaking anonymously, told how she was turned away on Monday and faced massive queues when she returned on Tuesday to get her second jab.

She said she and several others could not be seen by clinicians due to the sheer number of people already inside – despite the fact the centre was scheduled to be open for another 45 minutes.

Staff at the Leith Community Treatment Centre, Edinburgh, refused entry to at least ten people on Monday, citing a surge in people seeking jabs following the introduction of the vaccine passport scheme

The woman said: ‘I was told to try again the next morning. But to make sure I arrived sooner rather than later because it would probably get busier as the day went on.’

The next day she said she was faced with ‘a huge queue – and this time it was pouring rain. I couldn’t believe it.

‘I just waited in it as I didn’t want to have to come back, but I saw several people leaving after queuing for a while because they couldn’t afford to wait any longer.’

After waiting for more than an hour, she received her second jab in what she described as a ‘stressful’ and ‘chaotic’ atmosphere.

Thousands of Scots slammed the implementation of Scotland’s controversial vaccine passport scheme, as Nicola Sturgeon said she was sorry for the ‘deeply regrettable’ problems, which left people unable to access their vaccination status just hours before new restrictions came into effect on Friday, October 1.

However, the First Minister pointed the blame at the NHS for the issues rather than the new £600,000 app, and claimed high demand had crippled the new system.

Those attending large events and nightclubs in Scotland are now required to show proof they have had two doses of vaccine using the app before they are allowed in.

Speaking at the Scottish parliament in Holyrood, Miss Sturgeon said that information ‘wasn’t being sent quickly enough from the NHS system to the app’.

Admitting that this had caused ‘extreme frustration’, she said: ‘I apologise for that.’ 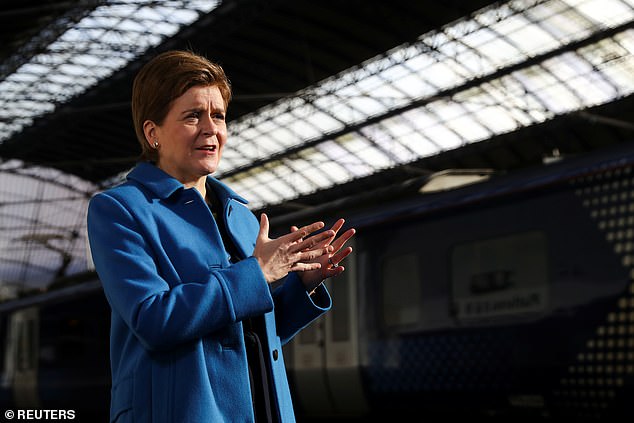 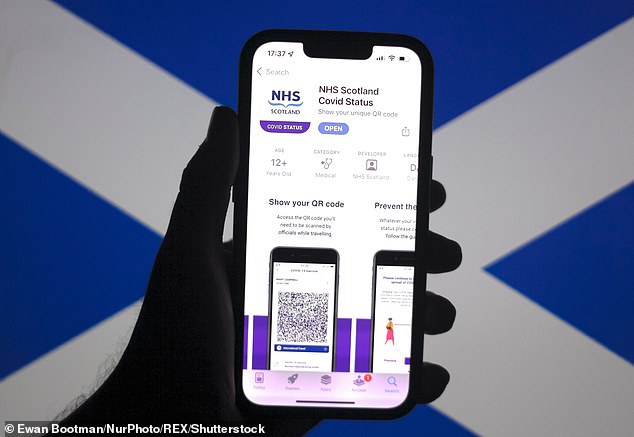 The First Minister pointed the blame at the NHS for the issues rather than the new £600,000 app, and claimed high demand had crippled the new system

Scottish Tory leader Douglas Ross slammed the process as a ‘shambles’ and branded the scheme ‘a complete and utter embarrassment’.

The NHS Scotland Covid status app was launched for Apple and Android devices last Thursday – just 12 hours before the vaccine passport requirements came into effect at 5am the following day.

The scheme means Scots will have to prove they are fully vaccinated to enter nightclubs, adult entertainment venues or other large-scale events, such as sporting events.

However, at the weekend football clubs and venues said they would not turn away anyone who could not prove their status due to the shambolic rollout of the app.

Compounding the chaos, Health Secretary Humza Yousaf told staff at bars and nightclubs on Friday to ignore Government guidelines and let people in without checking their documentation.

Speaking about the issue yesterday, Miss Sturgeon said: ‘I am, of course, well aware that many people found it extremely difficult to use the app initially.

‘In particular, many found that the app was unable to locate their vaccination record from the information that they provided. This problem was especially acute over Thursday evening and Friday.

‘I know this caused extreme frustration for users who wanted to download the app as quickly as possible, and also for business and events organisers who were planning to test their certification arrangements over the weekend. I apologise for that.’

But Miss Sturgeon went on to claim that ‘the problem was not with the app itself but with the NHS system that it links to’. 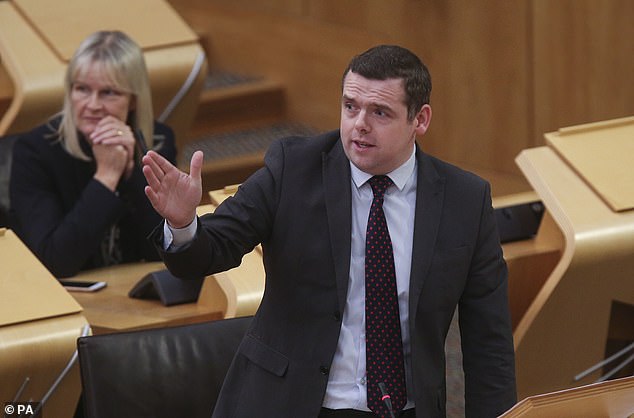 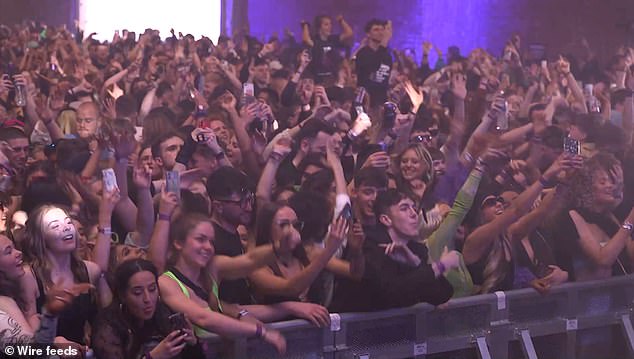 From 5am on Friday, people attending large events and nightclubs will need to show proof they have had two doses of vaccine using the app before they are allowed in (file photo)

She added: ‘Essentially, the high level of demand after the launch of the app – combined with an error in one part of the NHS system – meant that information wasn’t being sent quickly enough from the NHS system to the app.’

Miss Sturgeon said the system issues also caused problems for those requesting a paper copy of their vaccination status or a PDF version.

But she said: ‘Improvements to remedy the problem were made to the NHS system on Friday evening. Indeed, I can report that the initial backlog of people waiting for their information to be matched had been cleared by Saturday lunchtime.’

Almost 380,000 people have now downloaded the Covid status app, which was developed by a Danish firm.

Scottish Government officials will continue to monitor the app’s performance, with enforcement of vaccine passports to begin on October 18.

He said she must accept that the scheme should have at least been delayed. ‘This scheme has been a total embarrassment since the day it launched,’ Mr Ross said.

‘The First Minister can’t even put a number on how many people tried and failed to download the £600,000 app over the weekend.

‘It’s extraordinary that Nicola Sturgeon won’t accept that this disastrous policy should have been delayed, after such a chaotic start.’

He added: ‘The app was delayed and only came into force less than 12 hours before the scheme began. It was instantly a disaster – people couldn’t find the app, they couldn’t get the app to open, there were issues with facial recognition.

‘It seems the Government did not foresee high demand for an app that they want everyone who goes to gigs, football or nightclubs to download.’

Scottish Labour leader Anas Sarwar said the rollout had been a ‘predictable disaster’ after it was ‘rushed out last minute’.

He also raised concerns over ‘severe equality issues’. Mr Sarwar said: ‘The app requires either a driving licence or a passport.

‘The figure is likely to be higher in the very communities that have higher levels of vaccine hesitancy.

‘The First Minister is making this up as she goes along.

‘If we want to drive up vaccination we should be going door-to-door to convince those we know are hesitant and making it easier to just walk in for an appointment, rather than doubling down on this mess.’ 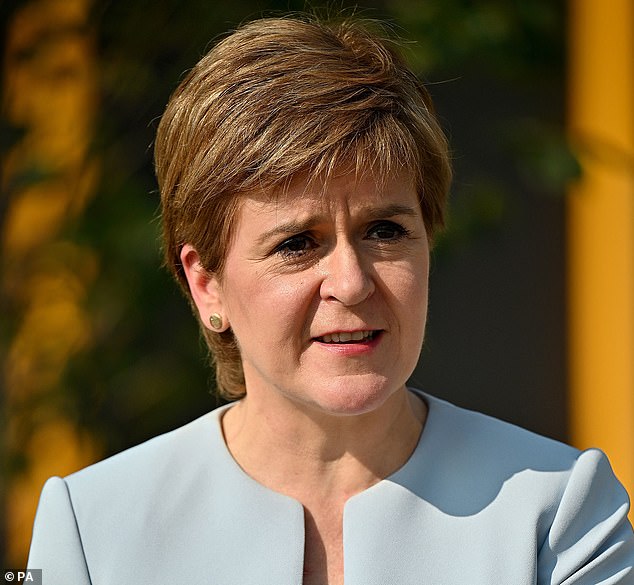 Miss Sturgeon insisted vaccine passports are a ‘proportionate way of encouraging people to get vaccinated, and also of helping large events and night-time hospitality to keep operating during a potentially difficult winter’

There are currently no plans to introduce certification for the wider hospitality industry but this will be kept under review over the autumn and winter months, according to the Scottish Government.

Exemptions to the scheme include under 18s, participants in vaccine trials, as well as people who cannot be vaccinated for medical reasons and people working or performing in the venues.

Miss Sturgeon insisted vaccine passports are a ‘proportionate way of encouraging people to get vaccinated, and also of helping large events and night-time hospitality to keep operating during a potentially difficult winter’.

She also said that while Aberdeen Football Club refused to check fans’ vaccine passports at their game against Celtic on Sunday, both Hearts and Rangers had managed to check about 20 per cent of their crowds.

Unlike smaller venues, stadiums will be allowed to carry out spot checks to ensure there are no large queues or difficulties caused by the new system.

The row comes after claims made by the Scottish Government that it could not join a UK-wide Covid app were rejected.

The Mail revealed last week the SNP had snubbed an offer to be part of a UK vaccine passport app, saying it would have taken more than 12 months to join.

Scottish Tory Covid recovery spokesman Murdo Fraser had said: ‘Instead of working with the UK Government to find a solution, the SNP has saddled us with a £600,000 app that is still broken days after it was first launched.’