Nicola Sturgeon launched a furious attack on Boris Johnson for dropping the ‘stay at home’ lockdown mantra today, insisting she will keep using it in Scotland.

The First Minister said she had still not been formally told that the slogan is being replaced, despite government sources briefing out a replacement to the media.

Ministers defended the new message of ‘stay alert, control the virus, and save lives’ this morning, suggesting it is part of a more nuanced approach to encourage people to get back to work while staying safe.

However, Ms Sturgeon – who previously warned ditching the message could be ‘catastrophic’ and will attend a crunch Cobra meeting later – tweeted: ‘It is of course for him to decide what’s most appropriate for England, but given the critical point we are at in tackling the virus, #StayHomeSaveLives remains my clear message to Scotland at this stage.’

She added pointedly: ‘STAY HOME. PROTECT THE NHS. SAVE LIVES.’

The open row came as senior Tories accused the SNP of exploiting the crisis in a ‘tasteless’ bid to fuel its independence campaign. 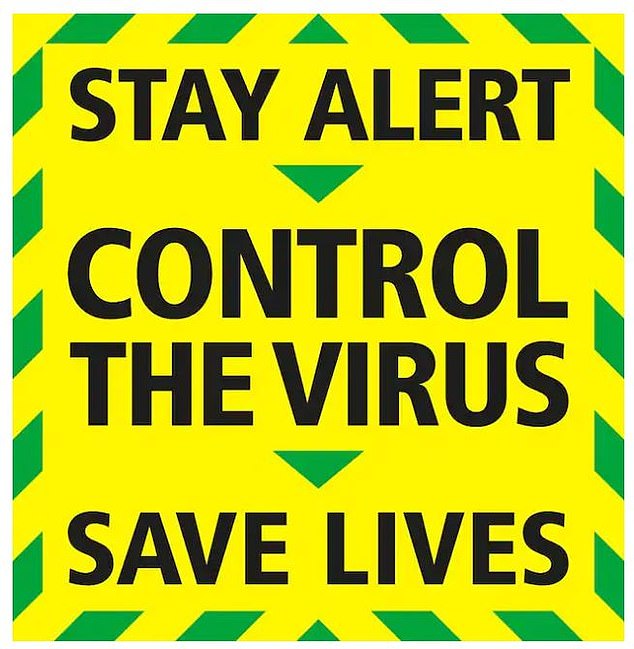 The PM is expected to drop the slogan ‘stay at home, protect the NHS, save lives’ in a televised address to the UK tonight at 7pm in an effort to reopen parts of the economy (pictured, new government pandemic slogan)

Mr Jenrick told Sky’s Sophy Ridge On Sunday it was the right time to ‘update and broaden’ the message to the public.

‘I think that’s what the public want and that they will be able to understand this message, which is that we should be staying home as much as possible but when we do go to work and go about our business we need to remain vigilant, we need to stay alert,’ he said.

‘And that means things like respecting others, remaining two meters apart, washing your hands, following the social distancing guidelines because the virus continues to be prevalent, too many people are still dying of this and we’re going to have to live with it for a long time.’

Pressed if there is a danger the message is too woolly, Mr Jenrick said: ‘Well I hope not. ‘We need to have a broader message because we want to slowly and cautiously restart the economy and the country.’

Mr Jenrick went on: ‘We’re not going to take risks with the public. I understand people are anxious about the future but we want now to have a message which encourages people to go to work.

‘Staying home will still be an important part of the message but you will be able to go to work and you will in time be able to do some other activities that you’re not able to do today.’ 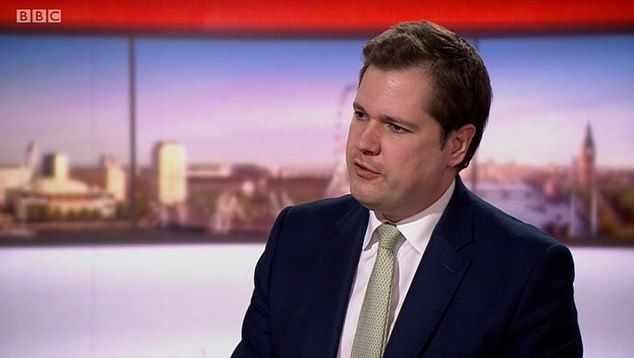 There were signs early last week that the government was putting together major moves towards easing the lockdown.

However, the ambitions have been scaled back, with Mr Johnson his most senior ministers – Dominic Raab, Michael Gove, Rishi Sunak and Matt Hancock – having thrashed out a limited strategy on Wednesday night, fearing that the country’s infection rate is still too high.

Even so, the tweaks being unveiled by Mr Johnson are set to provoke splits in the UK’s approach, with each nation having devolved powers.

Welsh First Minister Mark Drakeford made clear his concerns about the ‘stay at home’ slogan being dropped this morning. He said he would be telling people in the principality that ‘if you are not out of your house for an essential purpose… staying at home remains the best way you can prtect yourself and others’.

Scottish Health Secretary Jeane Freeman said she had ‘no idea’ what the new guidance meant.

‘That is not a change that we would agree with. I think the First Minister was really clear last week that the ”stay at home” message was the right message and if I’m perfectly frank, I have no idea what ‘stay alert’ actually means,’ she told the BBC’s Sunday Politics Scotland.

She added: ‘We’re asking the public to do a very great deal here and the least we can do is be consistent and clear in the message that we’re sending and stay at home is the right message.’

Vaughan Gething, health minister for Wales, said there had not been any agreement or discussion of the UK Government’s new ‘stay alert’ slogan with the other nations.

‘I’ve seen the media briefings and changed message for England. There has not been a 4 nations agreement or discussion on this,’ Mr Gething tweeted.

‘The @WelshGovernment message has not changed. Stay at home and if you do go out observe the social distancing rules. #StayHomeSaveLives’.

Along with the new mantra, Mr Johnson will use a TV address to the nation at 7pm to announce a DefCon-style five stage alert system to describe the country’s outbreak condition.

The UK is currently at the second most serious rating of four – meaning most of the lockdown must be maintained.

With evidence increasingly suggesting the virus spreads far less readily in the open air, the once-a-day limit on outdoor exercise will be dropped.

The focus will also shift to getting businesses up and running where possible, with detailed guidance for firms on how they should operate, and garden centres allowed to open from Wednesday where two-metre ‘social distancing’ rules can be put in place.

Travellers and shoppers could be urged to wear face coverings, as has already happened in Scotland.

Breaches of the more nuanced rules could be enforced with harsher fines, amid complaints from police that the enforcement so far has been ‘wishy washy.

Plans are being drawn up to use ‘peer pressure’ to get people to self-isolate, as those who test positive will be told to get in touch with anyone they might have infected.

Mr Jenrick said the announcements will be ‘cautious’, but the premier will lay out a plan that ‘encourages people to go to work’. 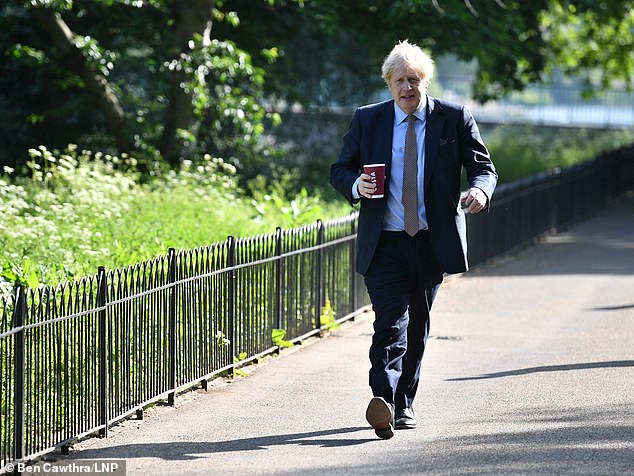 Scottish Conservative leader Jackson Carlaw said the SNP was using the ‘most inappropriate of circumstances’ to debate Scottish independence while Covid-19 continues to claim lives.

Mr Carlaw said: ‘There will always be the odd Nationalist willing to push the independence argument even under the most inappropriate of circumstances.

‘A considerable number of very senior SNP politicians are using the Covid-19 crisis to push their selfish separatist agenda.

‘Nicola Sturgeon must be embarrassed by these interventions. She should order a stop to them right away.’

The Tories said the SNP’s Joanna Cherry, MP for Edinburgh South West, said last week that the virus could provide the opportunity for a ‘major rethink’ on independence strategy.

They also highlighted Stirling MP Alyn Smith, who told The National newspaper that SNP members should establish ‘what the Covid-19 outbreak means for independence’, adding that ‘the case for independence in Europe is stronger than ever’.

MP Pete Wishart tweeted that ‘indy will take off again’, while his colleague Angus MacNeil stated it would be ‘naïve’ for the SNP to stop campaigning on separation.

At Holyrood, SNP backbencher James Dornan said ‘imagine what we could achieve’ if Scotland was independent by the next time a global health emergency occurs.